This figure is another one of those toys that when I first saw it, I thought it was stupid. "A shirtless guy with Godzilla legs? What's the point?" But a few years in the hobby and I've come to understand the appeal of the more unusual things like this. And fortunately, unlike when I fell into this trap with other toys, I didn't have to pay a premium to correct my mistake. In fact, I think I got this and two other vinyls for about $50 a couple months back. 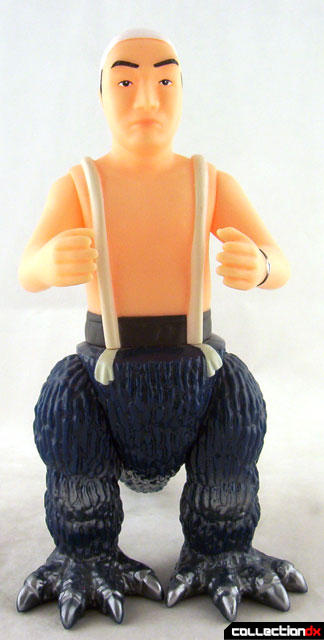 As you might guess, this toy depicts legendary actor Haruo Nakajima as he may have appeared half suited up on the set of the original Godzilla movie in 1954. At 9" tall and 6 points of articulation (waist, tail, hips and shoulders), the figure, like most vinyls, is basically a display piece. Especially considering the subject matter. I can't imagine anyone really playing with this. I mean, what are you gonna do, re-enact the coffee break the guy took? And in case you're wondering, the watch on his wrist appears to be set to five o'clock. I'm not sure if that means he's just beginning or just ending a day's worth of shooting. 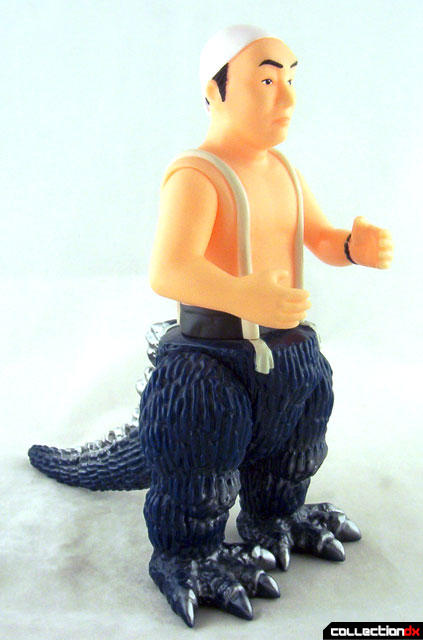 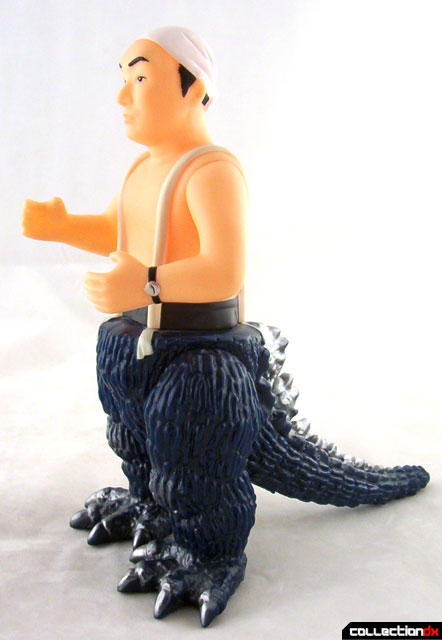 As we've come to expect from M1, the sculpt, paint apps and vinyl thickness on this toy are all top notch. There are at least a couple different versions of this sculpt. This blue "Irasawa" version, and brown and green event exclusives. For the initial release, Mr. Nakajima was available to sign autographs. (Thanks as usual to Club Tokyo for the info.) In fact, one of the reasons I finally broke down and bought mine was because he was supposed to be making an appearance at a Godzilla festival in San Francisco around August, I think. So I was thinking of getting mine signed, too. But unfortunately, the event had to be canceled. Ah, well. I'm not a big autograph collector anyway. It just seemed like a good opportunity to enhance a toy I was already planning on buying anyway. 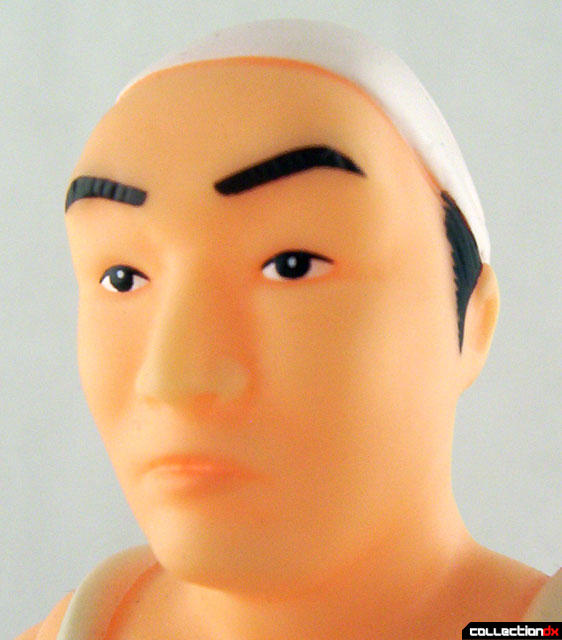 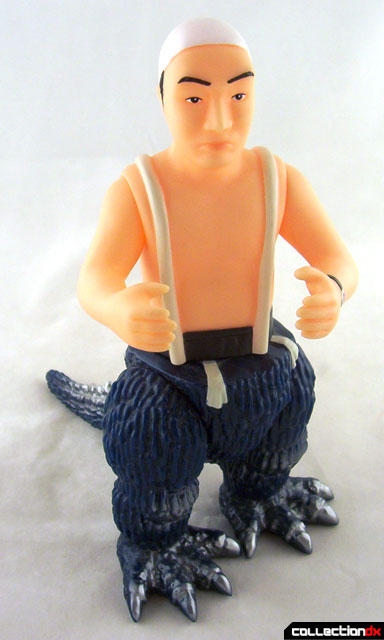 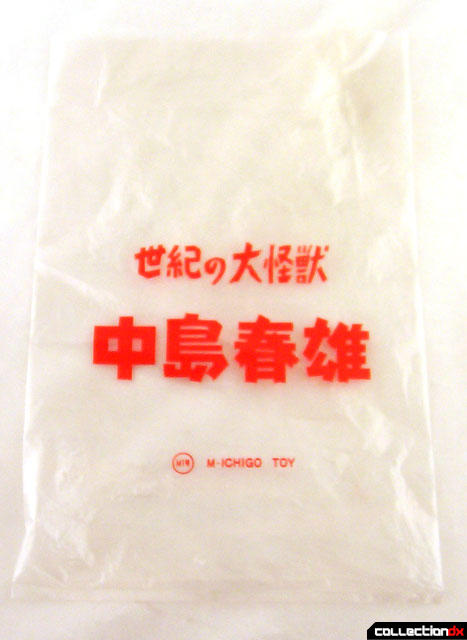 Wow- a whole day without anyone making a comment anywhere on CDX. Strange, that.

I met Haruo Nakajima in 2008 at G-Fest here in Chicago and even spoke to him in Japanese. He was very nice and I was amazed at how much energy he had. He was never without a smile and signed autographs for several hours, for free I might add, unlike most other conventions where you have to shell out a small fortune in order to just say hello to a celebrity.
I do like this toy and I think it is supposed to represent the scenes where closeups of Godzilla's lower half was destroying Tokyo. Nakajima only wore the bottom half of the suit for those scenes.

What a great experience, I'm sure.

Somewhere on the net, there's a photo of a battle scene from "Seijuu Sentai Gingaman" (i.e. "Power Rangers Lost Galaxy") being filmed. Clearly the specific camera set-up was for the upper body of the GingaRhino (Centarus Megazord) because the stunt actor doesn't have the legs on, and is just in long form-fitting pants. Without the entire suit on, he looks ver top-heavy!
------------------------------
CollectionDX Staff

Now THIS is an awesome figure. It would be cool to put it with the Tsubuyara vinyl,allthough I'm not sure if they're to scale with each other.

Heads up for those of you into these sorts of movies and toys,there are two new Bandai Godzilla figures trickling into U.S. stores now,original Mechagodzilla and a new sculpt of original Godzilla. They've been confirmed at Toys R Us,and I know places like CVS,Boscovs,KMart and others sometimes carry Bandai Godzilla figs so keep an eye out!

Yeah, the Tsuburaya figure is sort of neat too, though I'm not sure I'd go out of my way to get it. It is just a guy in a suit after all.

Thanks for the heads up on the Bandai vinyls, though. I'll certainly keep an eye out for them.

Well,yeah,that's why I didn't bother buying it,or even looking for it. But combine it with this figure and it's suddenly awesome.

This is reminding me,and sorry if this sounds like a plug or something,but if anyone here does not own the book "Eiji Tsubuyara:Master of Monsters" by August Ragone,you MUST purchase a copy. I definately feel it's a must own for any Godzilla/Ultraman/Etc. fan.

Great quick review! This guy's been on my 'eventually' list for a while now... such a unique idea!

Hhaha...yes: Jeromy's right: this toy depicts Nakajima in a special suit designed for filming closeups of Godzilla's feet as he smashes buildings, steps on tanks, and swings his tails into stuff...NOT Nakajima on his coffee break! ;)

I've seen the Tsuburaya figure and thought the exact same thing. Maybe one day I'll track one down...

Oh, I picked up August's book recently, but I haven't had a chance to read it yet. It sure LOOKS high quality!

It's a damn fine book. I only kind of sort of know the guy,so it's not like I'm pimping the book out of any sort of obligation. I just can't imagine a better book on the subject. I'm really not familar with ANY English language book that even touches on Latitude Zero or Dogora or what have you.

Posted by kidnicky on 21 September, 2009 - 22:45
Monsters Are Attacking Tokyo!: The Incredible World of Japanese

I have a book that talks about all those movies and more: Monsters Are Attacking Tokyo!: The Incredible World of Japanese Fantasy Films by Stuart Galbraith. It's a really good reference.

I'm a good friend of Augusts. And I WILL pimp the book. It is amazing. It's insanely comprehensive and from what I understand the only book of it's kind written in english. August organized GodzillaFest here in SF and is a trusted authority on all things kaiju. There are talks of an UltramanFest to be had here in the bay area. Nothing confirmed. :D

I don't collect vinyls, but I seriously want this one!

I want to know what the others are depicted on the box. I kinda like the giant Bigfoot couple. Anyone familiar know if those were or are available? I collect a bit more of well known Kaiju, but those look very cool.

Not a collector of vinyl, but I do have a soft spot for Godzilla. I'm intrigued.