Trendmasters was the master toy licensee for the 1999 animated movie The Iron Giant. It's one of my favorite movies not only because it's about a giant robot, but because the story really tears on your heart strings. It's truly fantastic and if you haven't seen it, there's something wrong with you.

Despite how great the movie was, it suffered from poor promotion and marketing and was a commercial failure. Because of this, what few toys were produced for the movie quickly went on clearance and disappeared from the shelves.

Shortly after the film's release on VHS, word started to get around about how great this film was and it became a sleeper hit, a cult classic. but at that point, toys were nowhere to be found at retail. The Trendmasters toys began to fetch a premium on the early days of on-line auction sites like eBay and still do to this day.

This toy, the Transforming Iron Giant, is one of those smaller, but fantastic, action figures.

The packaging for these toys were really great, with an awesome vacuum molded Iron Giant at the top of each blister card. 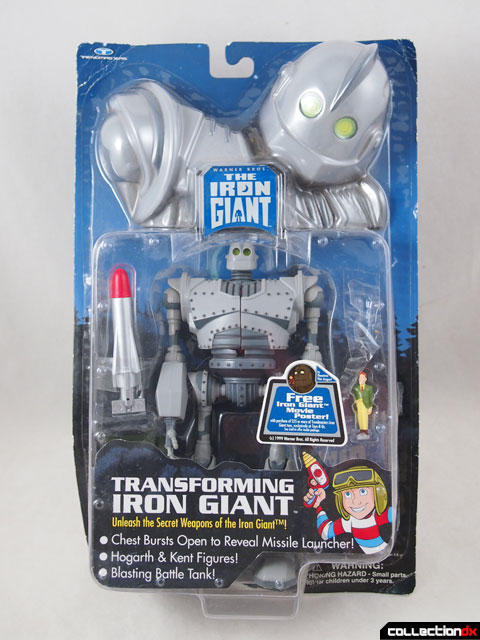 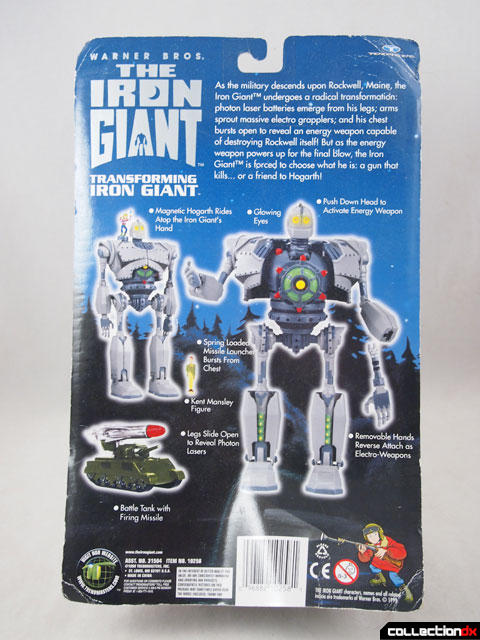 The gimmick of the toy is that it transforms into the battle mode that is shown in the movie. Of course, it would be near-impossible to exactly replicate its appearance in the film, so Trendmasters did the best they could. 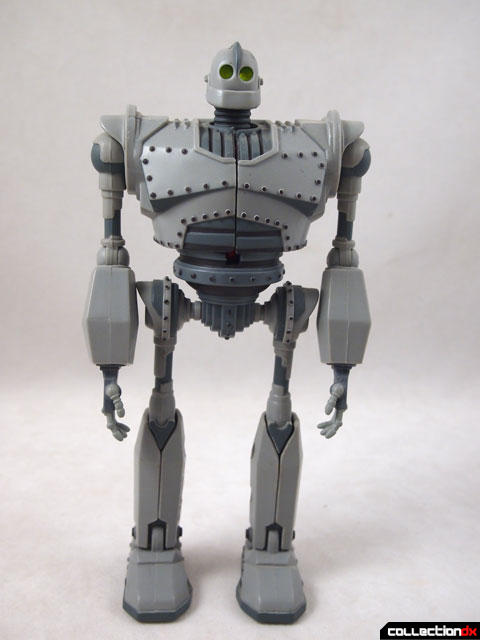 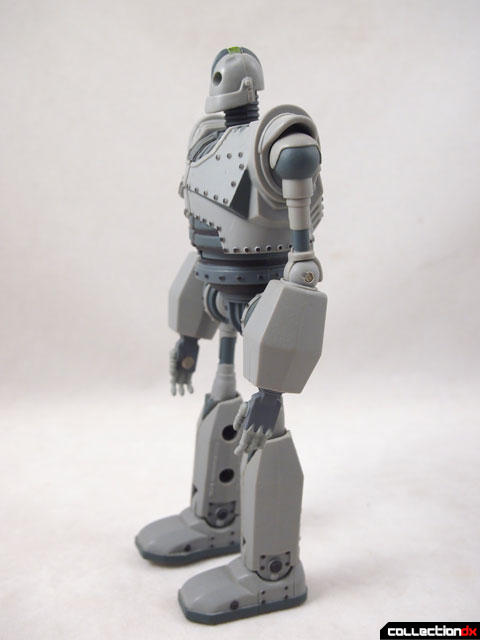 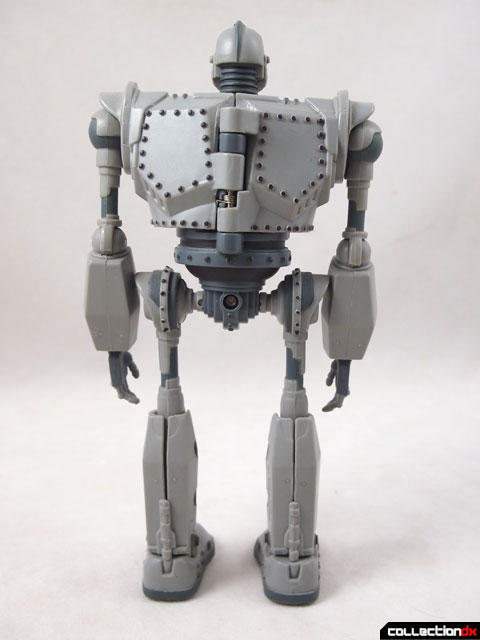 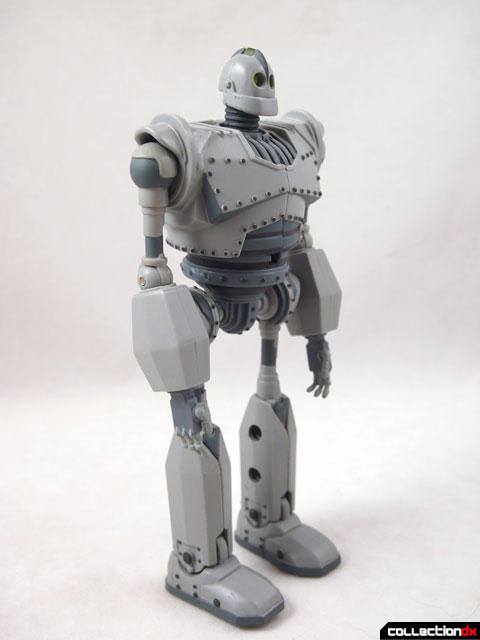 First, lets talk about accessories. The Iron Giant comes with two miniature figures of the government agent Kent Mansley and the star of the movie Hogarth Hughes. Unfortunately the Hogarth figure has been lost to time. It's a pity because the figure had a cool gimmick which I will discuss later. 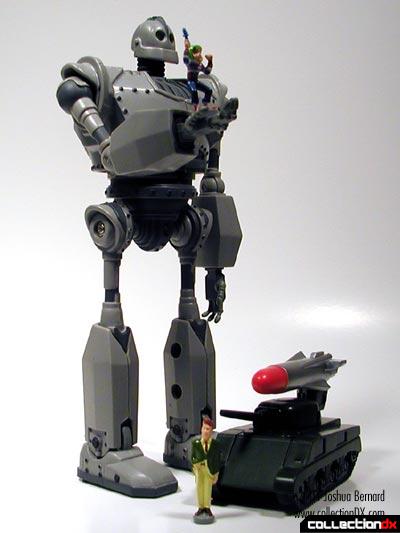 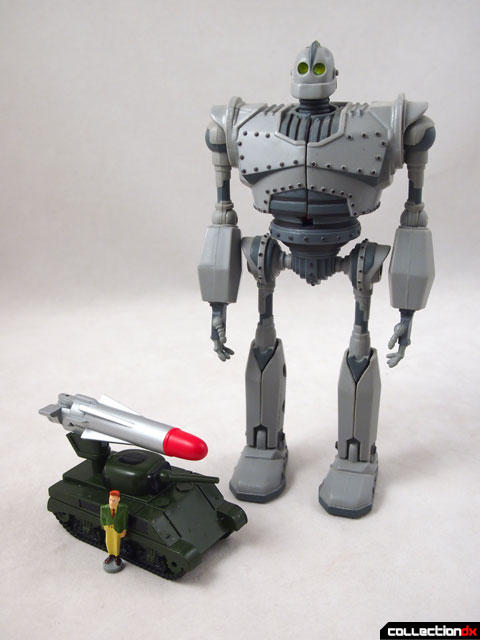 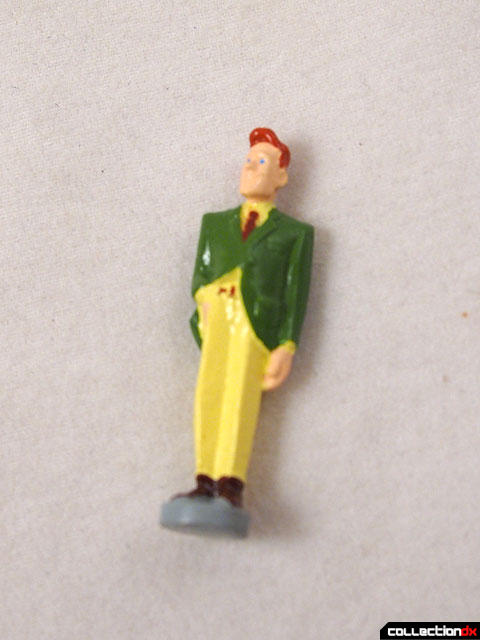 Also included is a missile tank with a real launching missile. 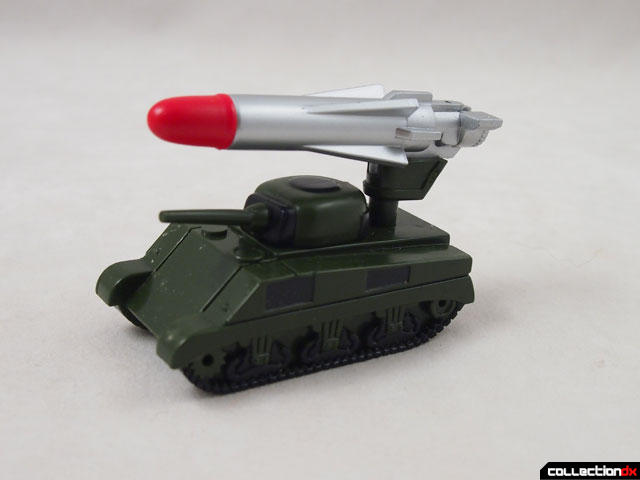 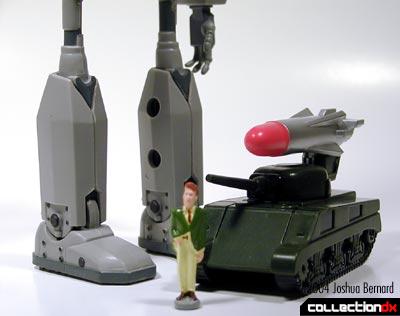 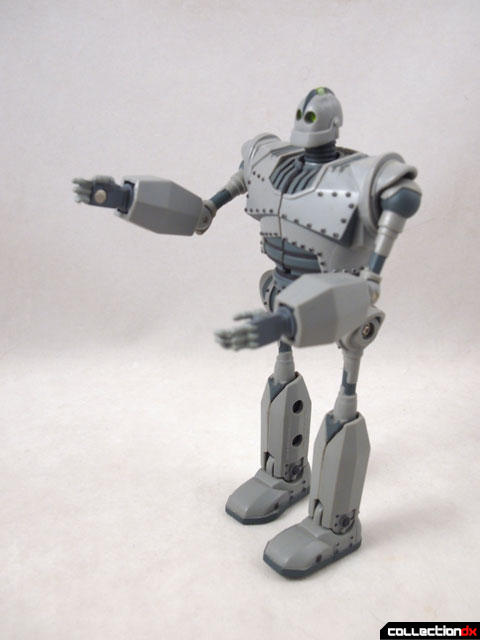 The head has an early example of light-piping. This gimmick is a transparent piece of plastic that allows a light shown above to shine through the eyes. It's common on today's transformers, but I don't know how common it was in 1999. 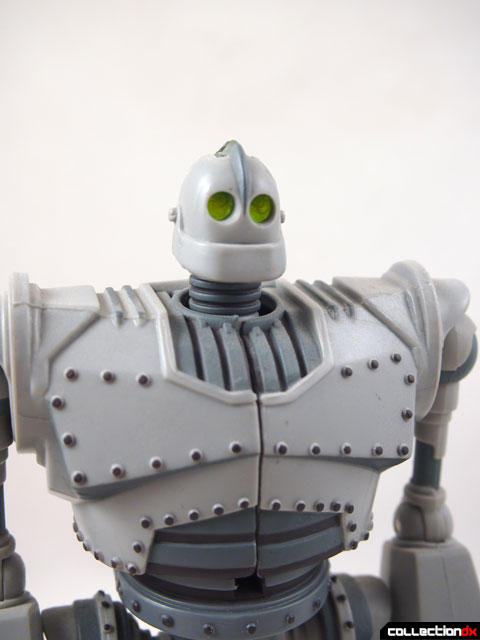 Each arm transforms into a cannon by simply pulling the hands out and turning them around. But before you do that there is a neat surprise in the palm of the hand. In it is embedded a magnet that the small Hogarth figure would attach to. 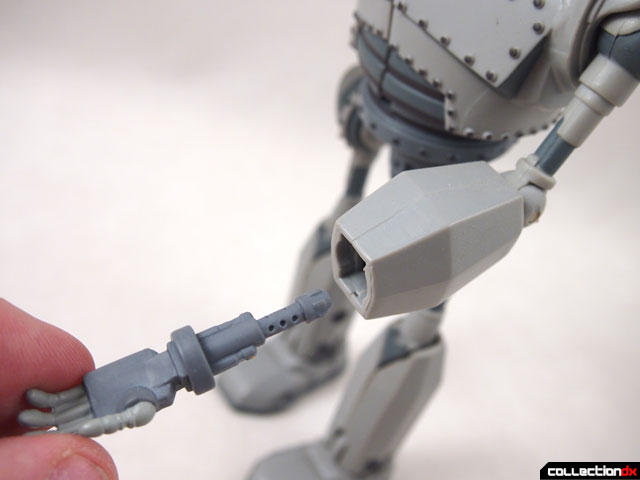 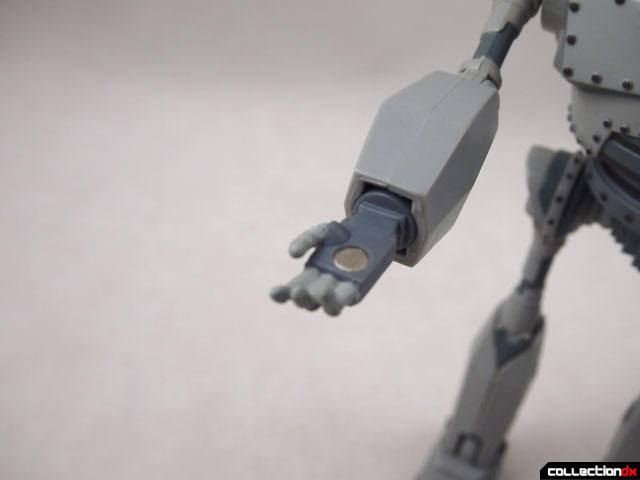 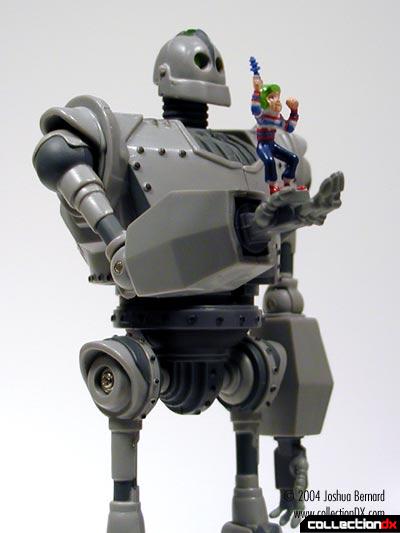 Each leg conceals a bank of weapons that is revealed by sliding the panels outward. 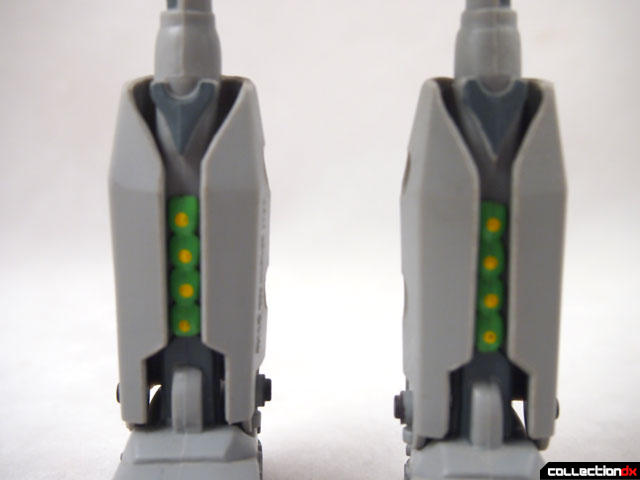 To complete the transformation, bend the shoulders back to reveal the energy weapon in the chest. This weapon is actually a large missile that can be fired by pressing the head down into the chest. 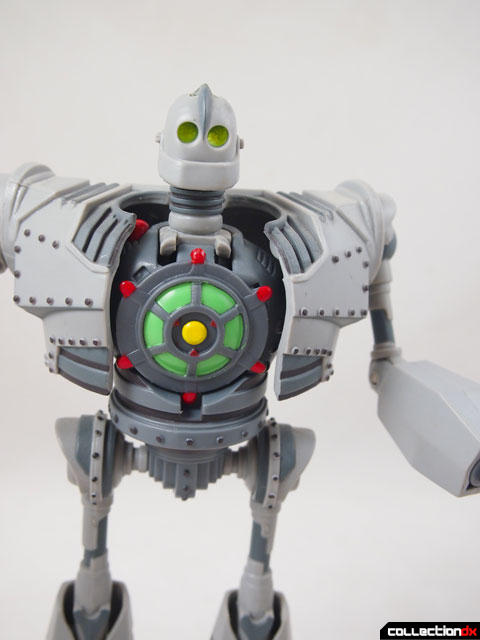 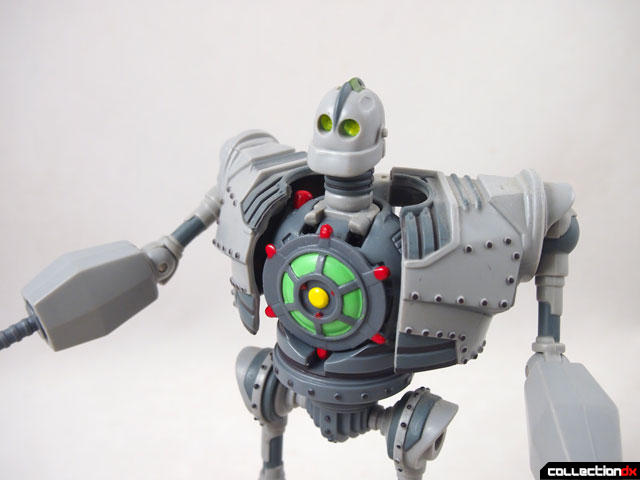 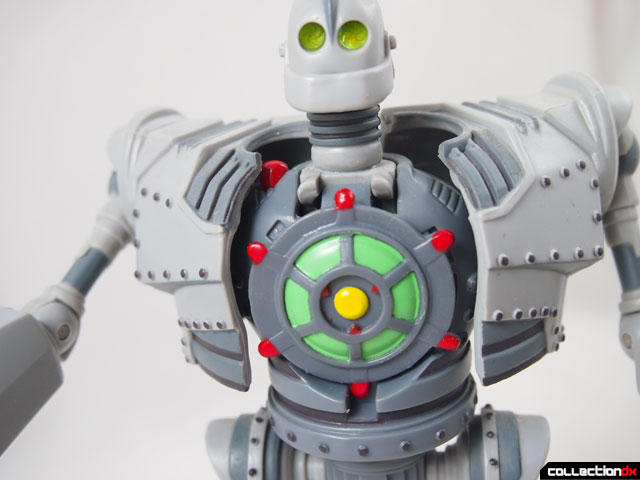 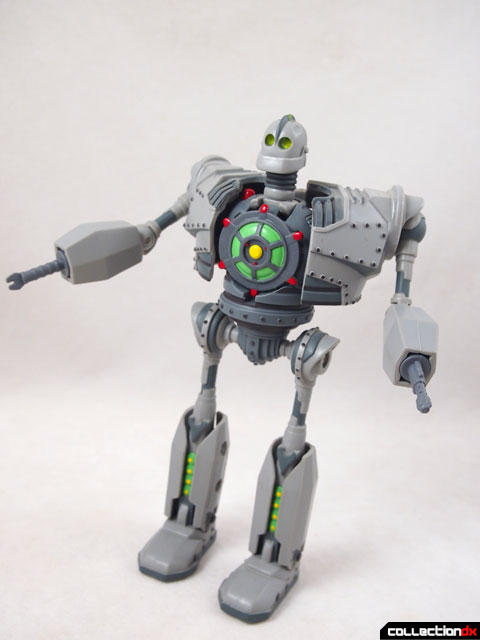 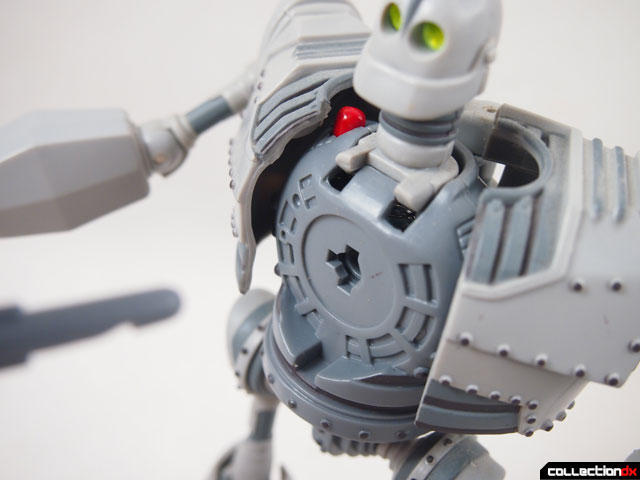 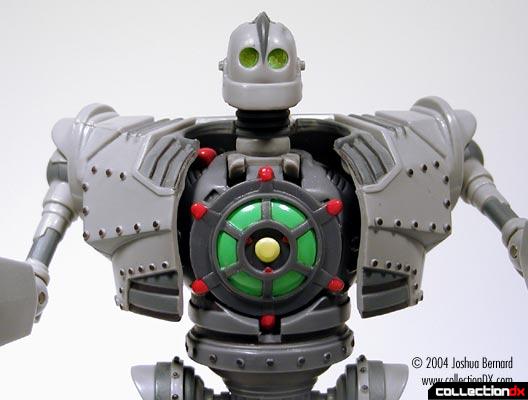 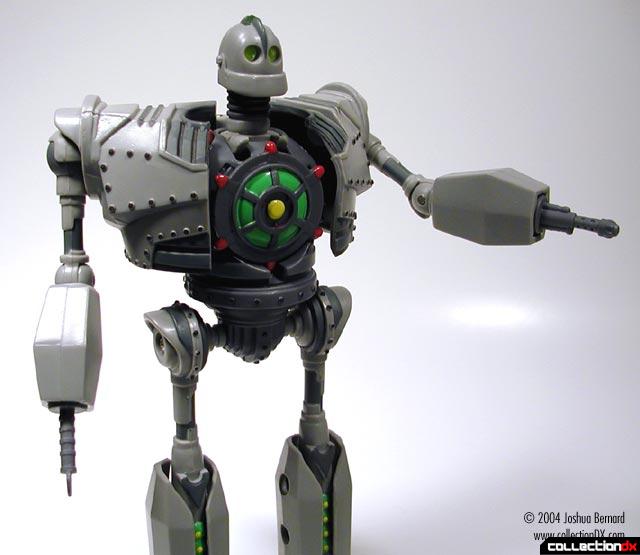 To this day it still amazes me what a great toy this is, and how much Trendmasters packed into a small package. There hasn't been a high-end toy made of the Iron Giant yet and I think it's about time.

There is actually a DX sized version of this. The gimmicks are much closert to its on-screen depiction. I should have bought it when it was on shelves when it came out.

We just finished rewatching the film, well, along with my son who watched it the first time and he loved it.

Too bad it did not do well in the box office, hopefully they will reissue toys like this soon.

Trendmasters really did a good job on some of the things they had licensed, and the Iron Giant was really underrated at the times.