It's probably been said before, but one of the great side effects of this gig is when you take toy off your shelf to photograph it and examine it to review and your appreciation of it grows as a result.

Pigudoron (ピグドロン) is an enemy of Getter Robo G and as such, I am assuming it's the work of Go Nagai. Please correct me if I'm wrong. This clear yellow soft vinyl of it is one of the few examples of a toy of this character. The only other one that I know of offhand is a silly zenmai toy by Robin. 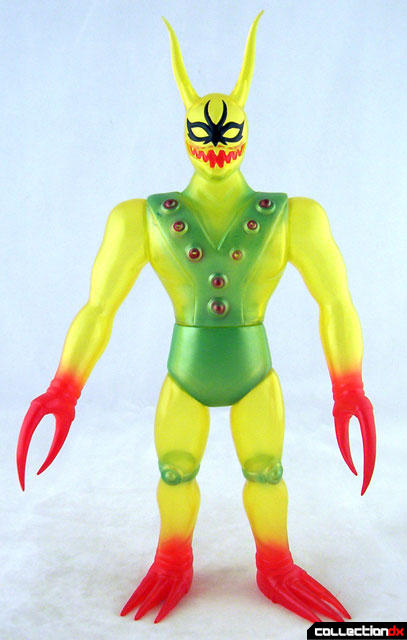 So, I've been with CDX for quite a few years now and I'm sure no one reading this now is surprised that I've got a clear vinyl villain in my collection. But when I got this thing about 5 years or so ago, it wasn't exactly something I was interested in. I wasn't buying vinyls at all at the time and I had no particular love, or even knowledge, of the character. But y'see, a collector buddy of mine had run into some money trouble and decided to sell of his toys. I was doing well at the time so mostly to help him out, I decided to buy a whole lot of stuff and this toy was included in it. I stuck it on my shelf and more or less forgot about it.

But lately I feel like I've been running out of stuff to review so I dug deep and decided it was time to post something about this guy. And in so doing have realized it's a pretty dang cool piece. 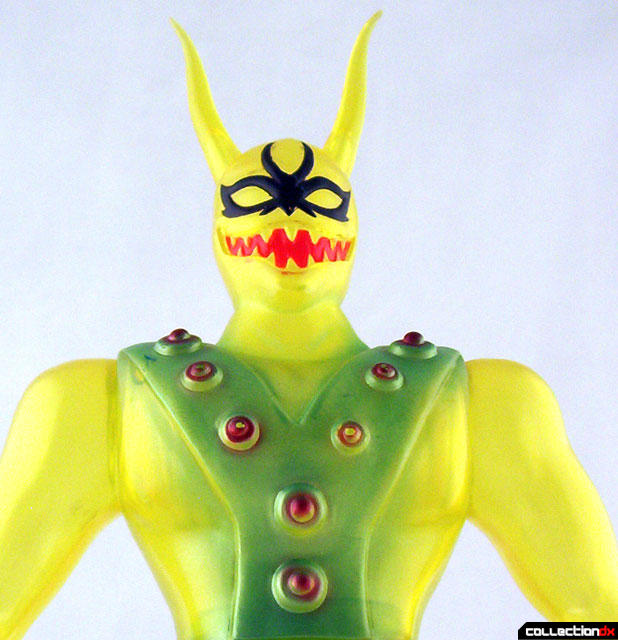 Pigudoron stands approximately 13" tall with 5 points of articulation (hips, shoulders and waist). As not above, it is cast in clear yellow vinyl with red, green and black painted highlights. The colors looks great against one another and look unique compared to many other vinyls. The clear yellow has a way of almost enhancing the light that shines through it without being distracting. 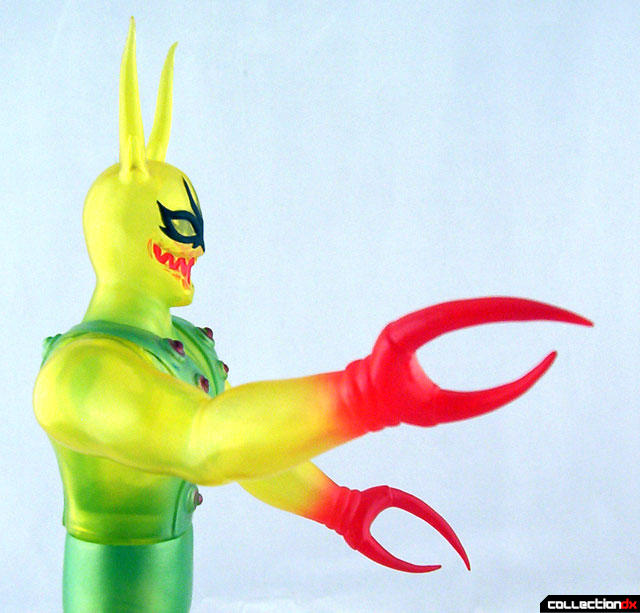 The sculpt of the face is really neat too. The big wide grin with it's sharp teeth is creepy and the black black around the eyes almost suggest a mask (hiding something even more hideous!).

But you know what the coolest thing is? Something I never realized until I was photographing it for this review.....

You can see the face pretty clearly, through the vinyl, from the back...! 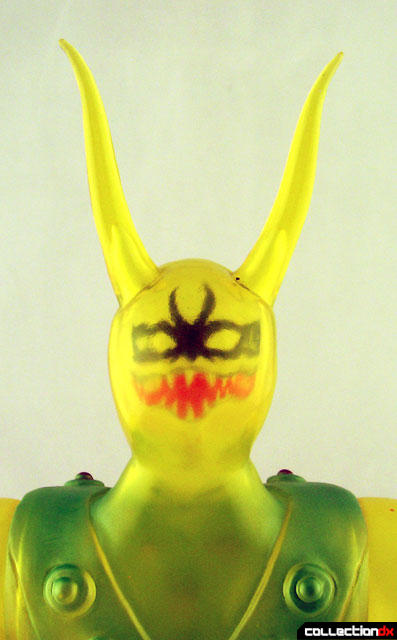 I have other clear vinyls but I don't recall seeing this effect before and I think it's just groovy. Looking at it from behind looks extra creepy. It probably works best here because of the simple shape of the head as it's nearly the same from both sides. I wonder if whoever designed the toy planned for that or if it's just a happy accident? Regardless, I find it very appealing. But now, do I display it on my shelf facing forward or back? :)

Pigudoran is probably the most popular of Romando's "Soul Of A Otoko" line of vinyls, which had only 3 entries. Each came bagged with a header card.

Oh dear... he's wonderful. My mom's really impressed that you can see his face thru the back of his head, but really, she'd rather it glowed as well.

I'm pretty sure that's the enemy robot from the Getter Robo G vs Great Mazinger movie, weird title since they don't actually fight.

"The only other one that I know of offhand is a silly zenmai toy by Robin."

I LOVE that toy. Lol

Awesome vinyl btw....Send me that search link too sir (after Sanjeev finds one that is). ;-)