Japan's love of trains knows no bounds. And why should it? It has the cleanest, most efficient train system in the world, and the train system seems to run everywhere. If it's one thing we know about Japan, if there is a thing, there will be a transforming toy of it.

Hikarian: Great Railroad Protector takes the great trains of Japan and transforms them into cute robot protectors who have to stop an alien invasion. The series ran from 1997-2000 and spawned an assortment of animated versions. The series was reborn in 2013 as Train Hero.

Like all the trains in Hikarian, Sniper Sonic is based off a real train. This one is based off the Hitachi 883 series which operated on Sonic limited express services by Kyushu Railway Company (JR Kyushu) in Japan.

The box is sweet, lots of cool art on all sides. 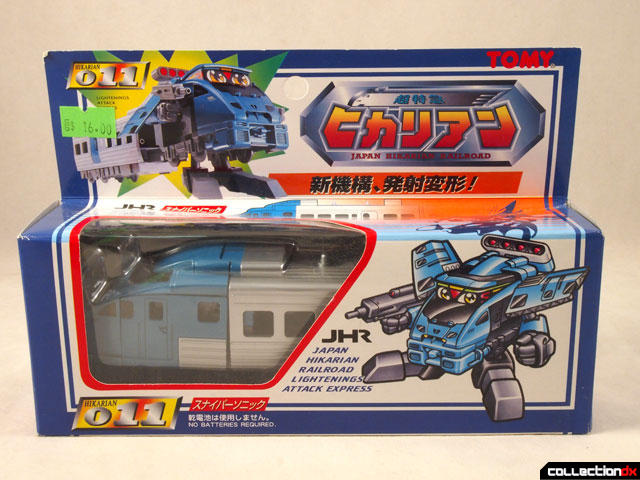 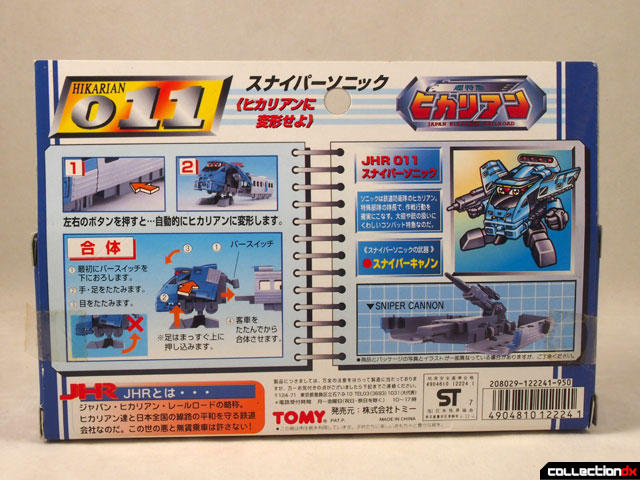 In his train from, Sniper Sonic looks great. There's no indication here that it transforms into anything else. 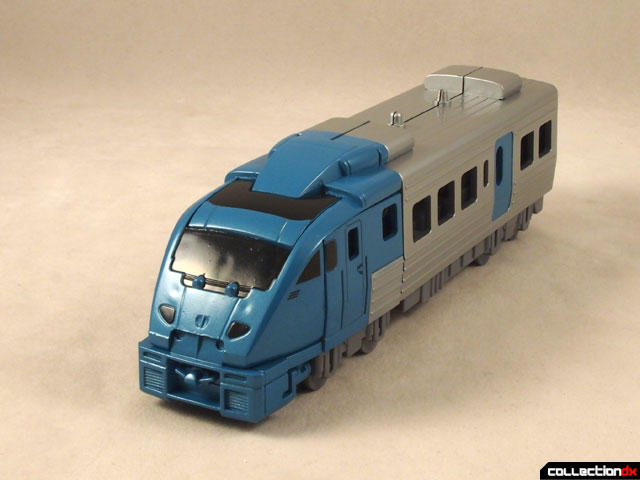 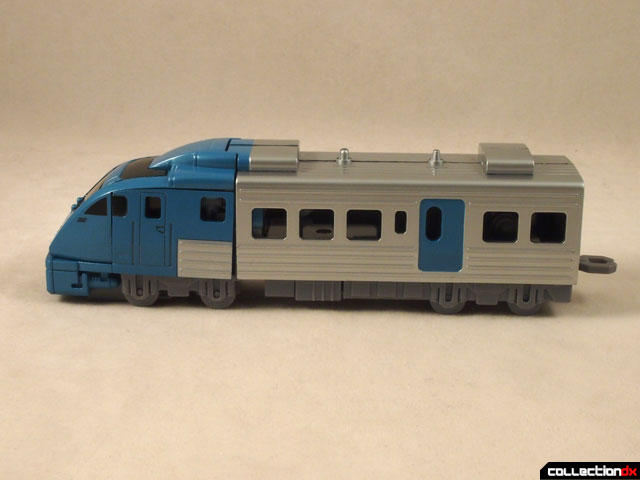 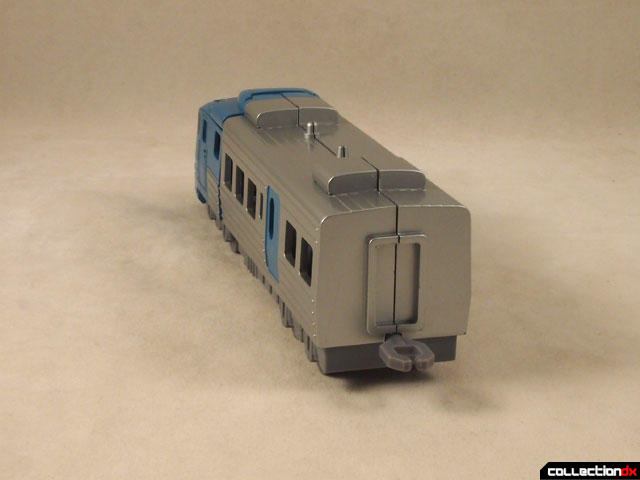 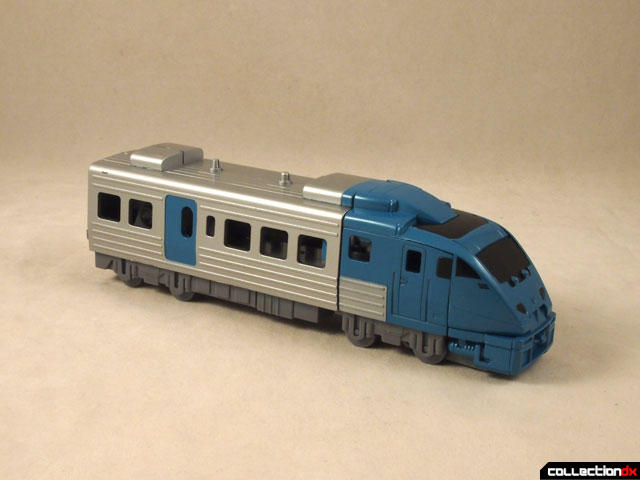 In fact, the trains are the same scale and material as Tomy's Pla-Rail system (which came over to the US as the Tomica rail system). They can even use the same tracks and have the same connectors. 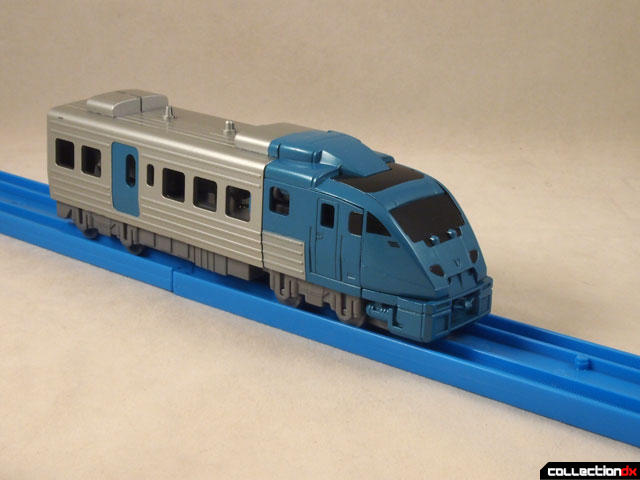 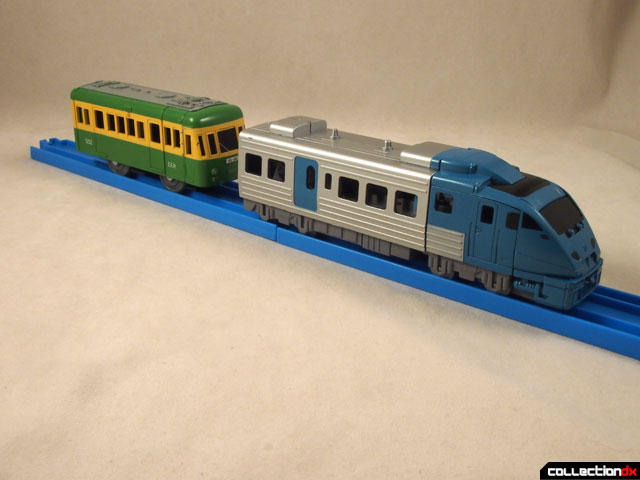 Press a button on the side and the transformation begins. 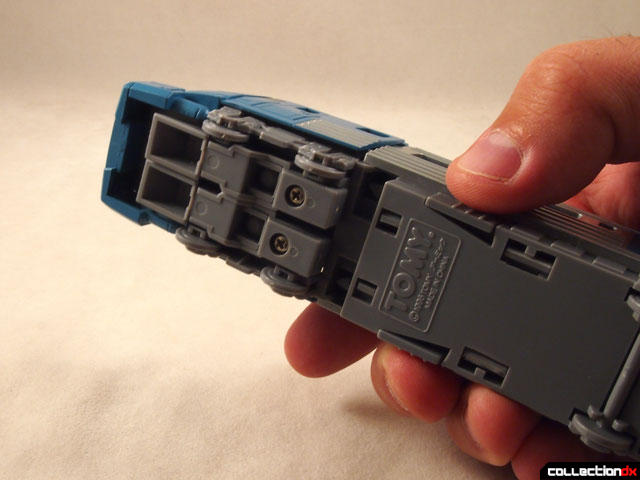 The rear of the trailer unfolds into a battle platform with a central cannon. 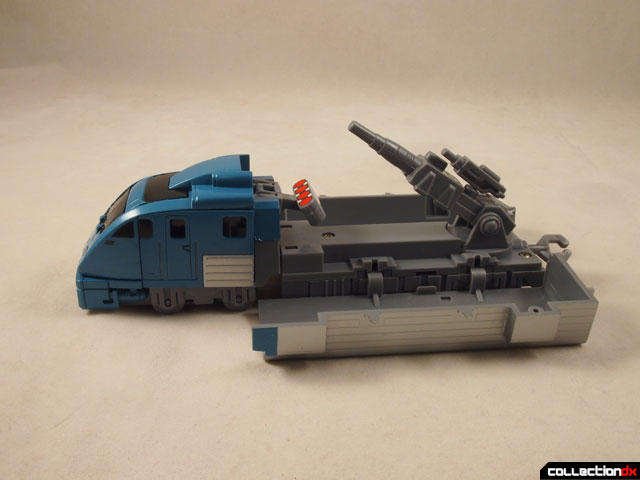 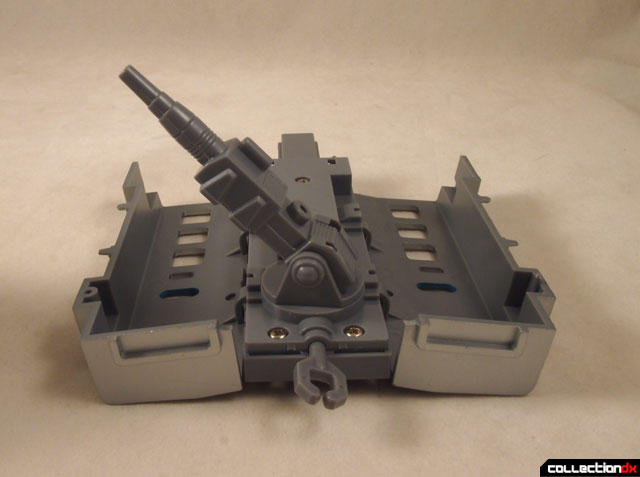 The front of the train ejects with a spring-loaded action and unfolds to become the robot. 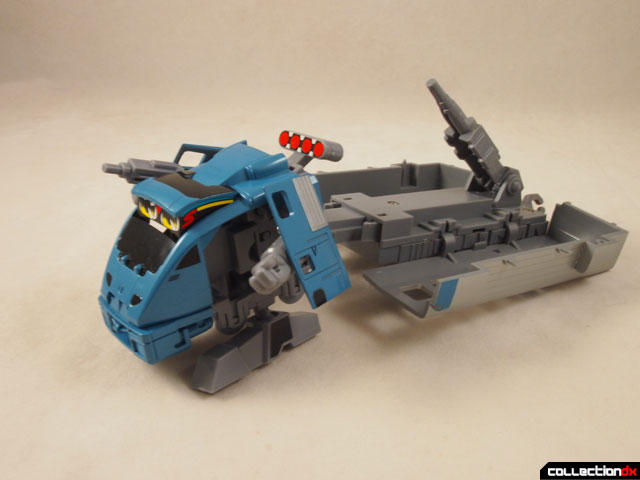 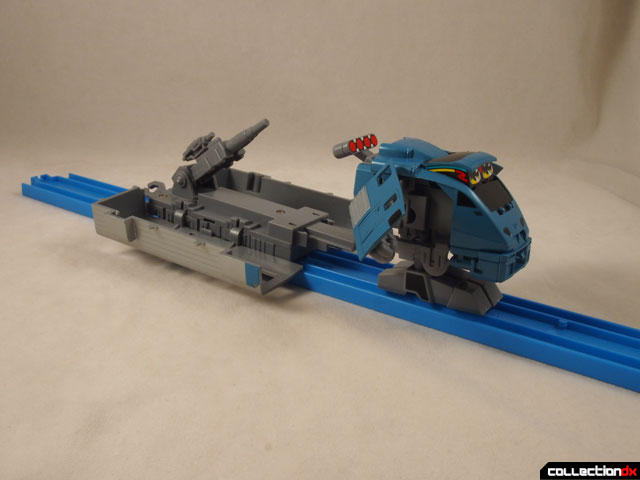 Sniper Sonic is rather dopey looking and not at all charming. It's supposed to be cute but the exaggerated eyes against the mechanical body just doesn't work for me. If you are going to go cute, go all the way. 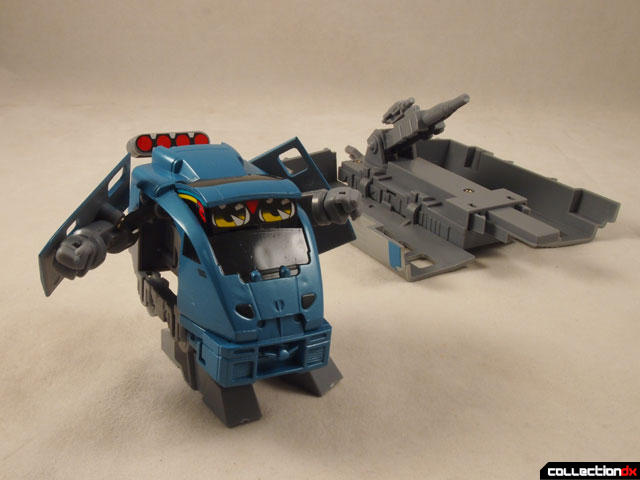 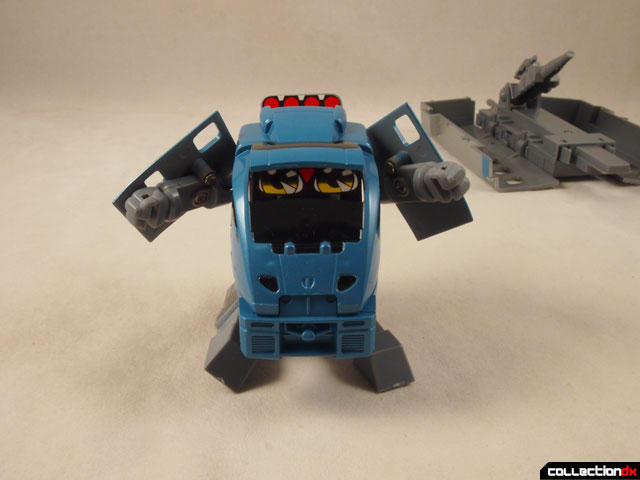 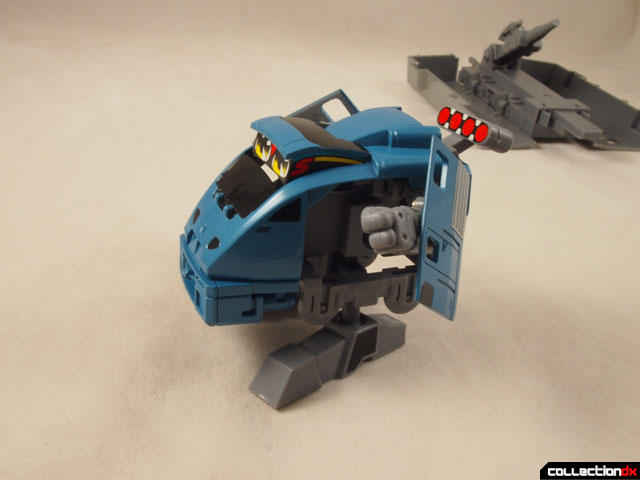 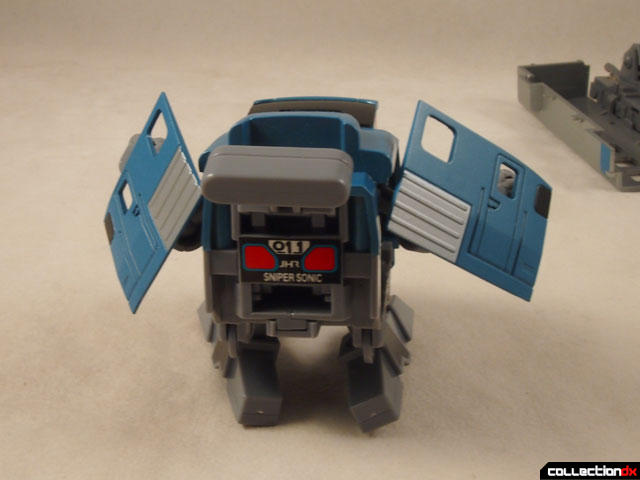 There's a lot of articulation, but not a lot you can do with it. Arms have shoulder, elbow and wrist joints, legs have hip and ankle joints. A gun is also included. 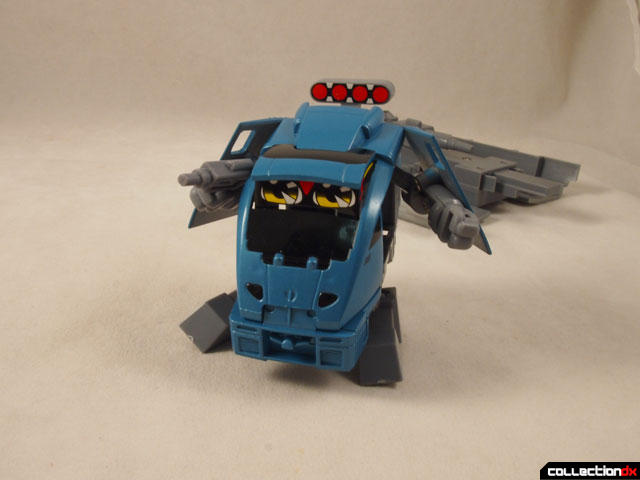 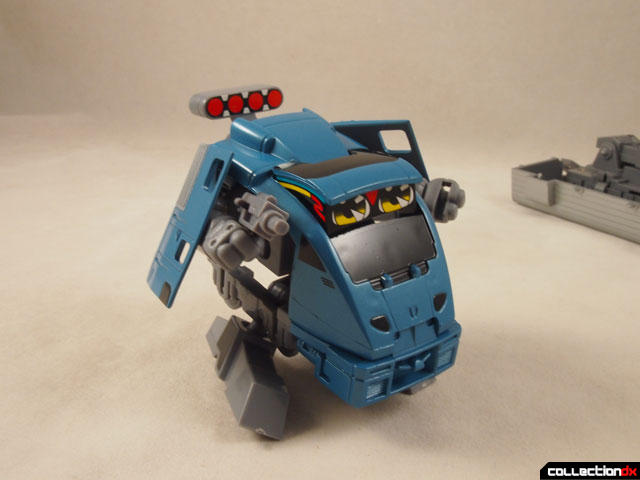 The toy is alright but the thing I actually like best is it's compatibility with the Tomy Pla-Rail system. The quality and play value are there and they are fun enough, but I don't see myself collecting any more of the line.

Very cool. I bought a bunch of these when I was in Japan back in 2000. I wanted to buy more but they were so hard to find in the US.. Thanks for posting this.

I bought a bunch of these in China that I was never sure were bootlegs or officially licensed maybe 10 years ago or so. I always wanted the big transforming robot they had, the something Garuda I think?

The Japanese love their trains... which is going to make ToQGer really hard to adapt into Power Rangers.