I've been covering Brave toys on and off for about the past 2 months or so and no other toy so far has surprised me in a good way like Sonokong's DX Goldymarg re-issue.

Goldymarg is a secondary character in the anime "The King of Braves GaoGaiGar". Goldymarg is basically the means of which GaoGaiGar can wield the "Goldion Hammer". The Goldion Hammer is an awesome weapon, but without Goldymarg ability to transform into "Marg Hand" GaoGaiGar would not be able use Goldion Hammer properly and without incurring damage. So you see the relationship between GaoGaiGar and Goldmarg is sort of symbiotic.

Goldymarg also has the ability to transform into the GoldyTank, which has a powerful Fusion Beam Cannon called Marg Cannon made up of what becomes Goldion's Hammer handle.

Well now that you get the idea of what role Goldymarg plays in the anime GaoGaiGar, on to the review of the toy.

Goldymarg comes to you in a beautifully illustrated, heavy corrugated cardboard box shown below. On the boxes inside Sonokong uses the flimsy plastic tray instead of quality Styrofoam that we toy collectors would really prefer...sigh. Oh well, at least the box is nice. 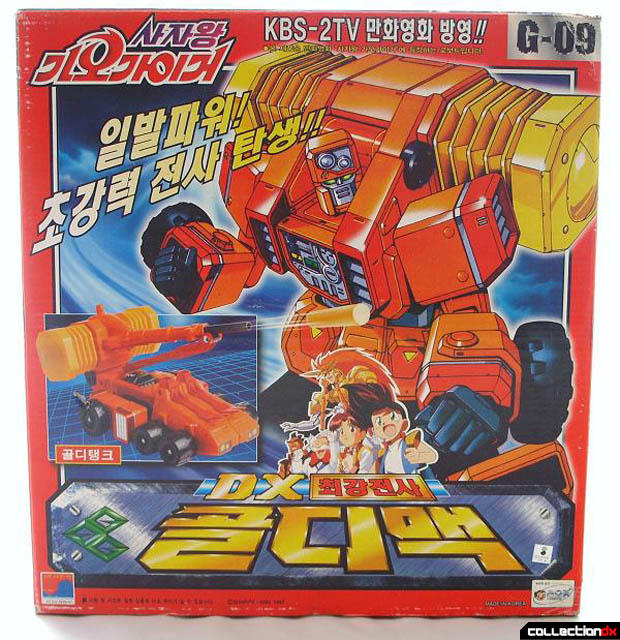 After taking Goldymarg out of his cardboard tomb is when the real magic begins. He is an impressive figure, standing about 9.5" tall from the top of hammer to toe. Goldymarg is made from quality feeling plastic with nice, solid clicky joints. As you can see below, Goldmarg may be a brick but he does actually has some decent articulation in the legs. 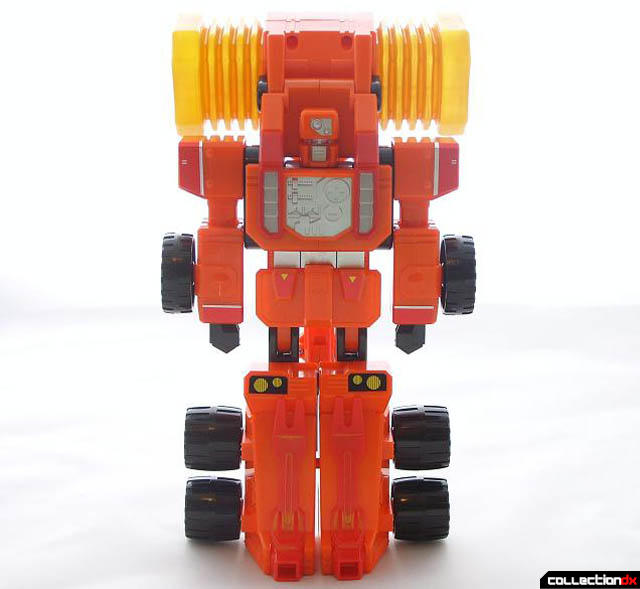 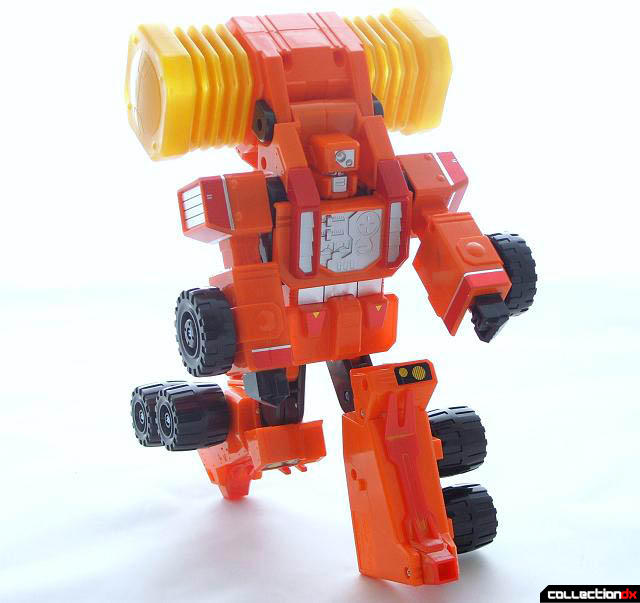 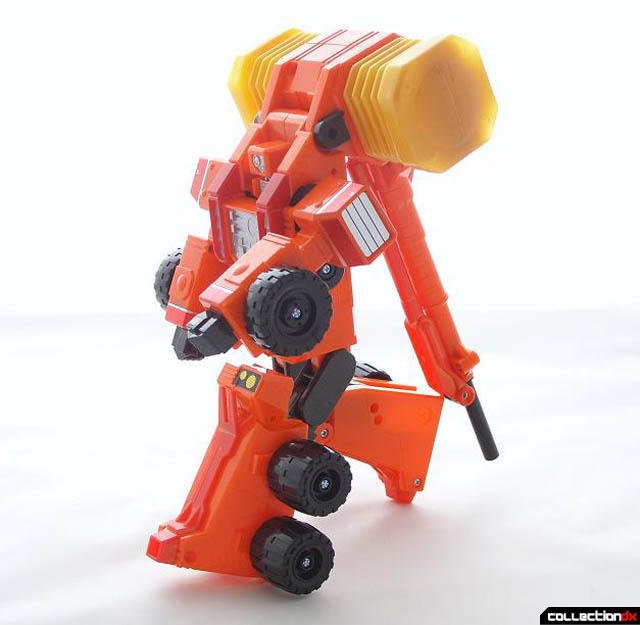 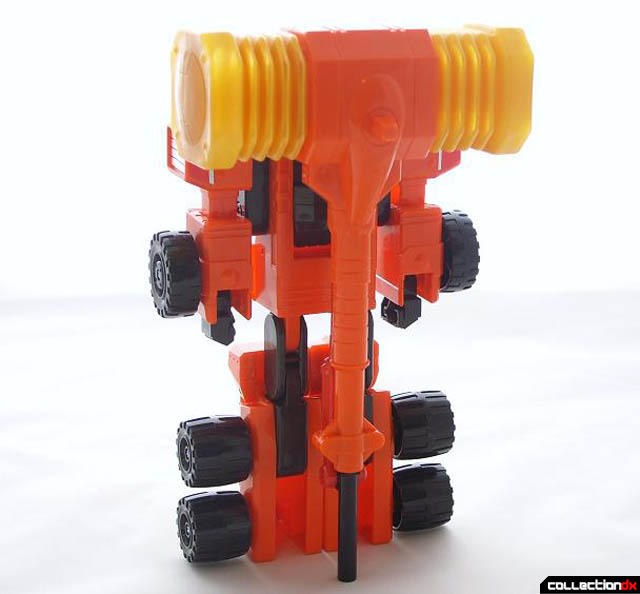 Just like in the video above, when Goldymarg transforms the top of his helmet closes over his eyes. I kinda dig the way it does this so I had to snap a pic of before and after. Actually, Goldymarg's whole transformation in this toy incarnation is pretty much dead on to the anime. 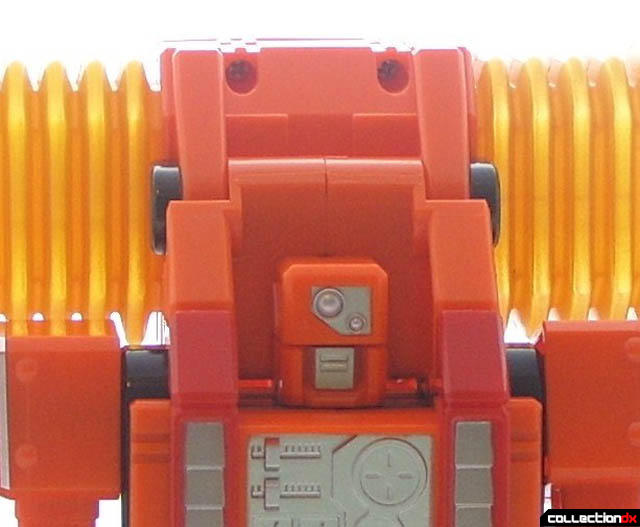 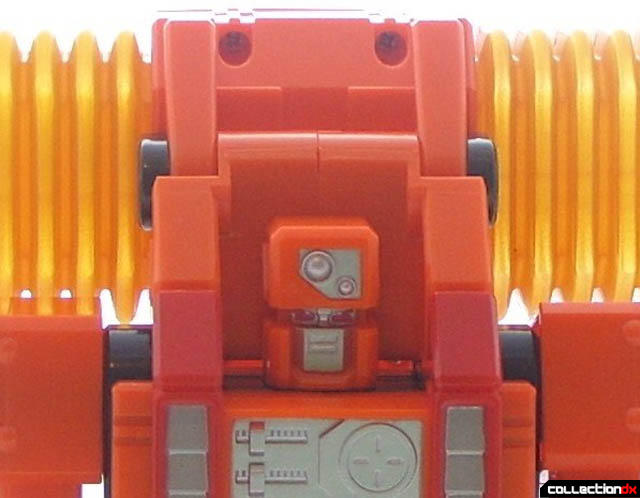 Moving along to Goldymarg in GoldyTank mode. In this mode you can use the 3 foam projectiles included with the figure. You do this by simply placing the projectile on the end of the pivoting fusion beam cannon and squeezing the flexible bellows of the Goldion Hammer. I prefer spring loaded, take out your eye weaponry on my toys, again, sigh. Is it just me or does this mode look a lot like the Transformers G1 Roller? Anyway, very solid in this mode and rolls great, very rugged. 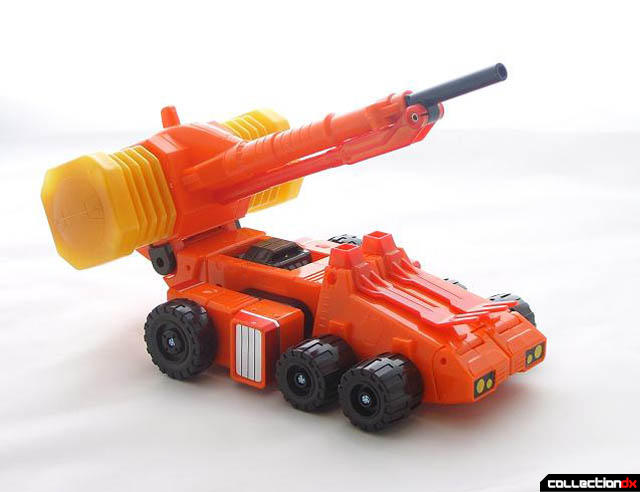 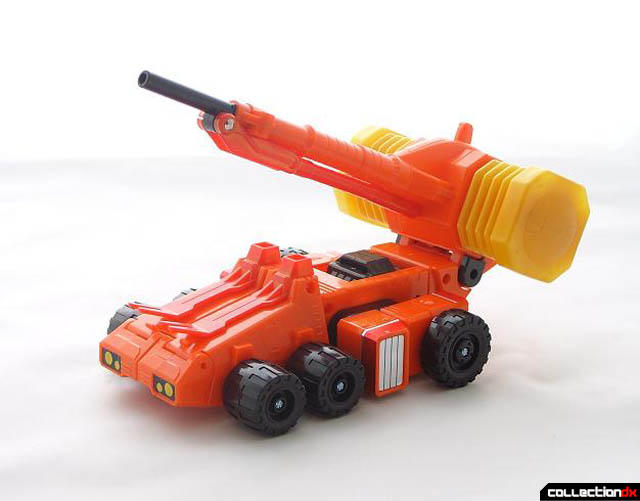 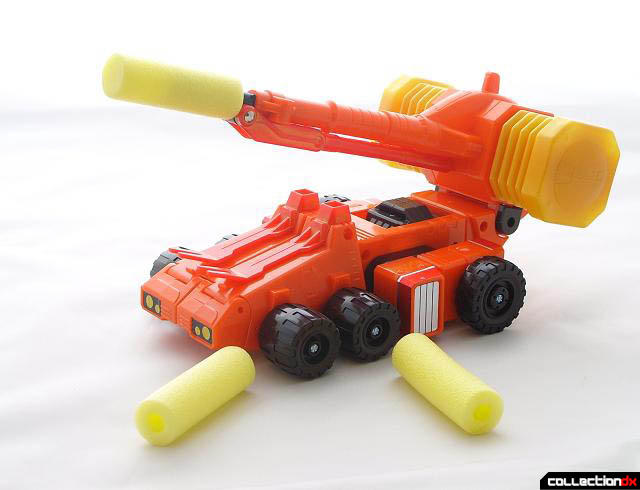 Before I get to Goldymarg's final mode, I figured I would include a token picture of Goldy in robot mode with the big guy, GaoGaiGar! 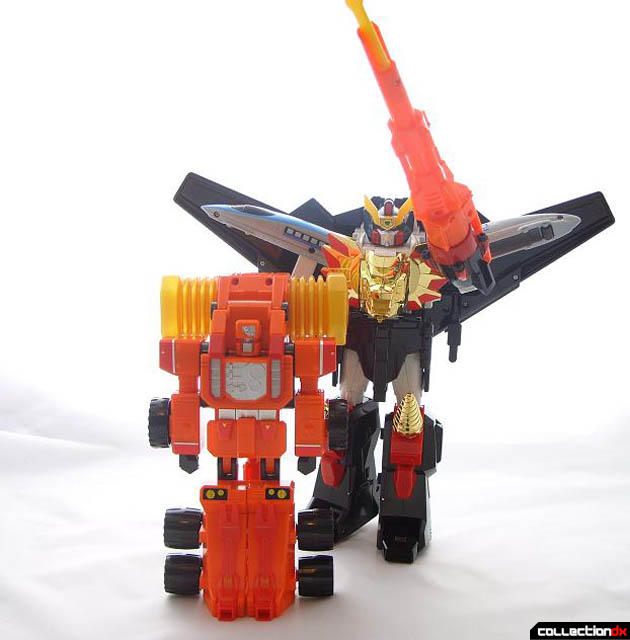 Onto Goldymarg's final mode, Marg Hand and Goldion Hammer. Like I said earlier in the review, the transformation is exactly like the anime, so just enjoy the pics of GoaGaiGar wielding what is his best weapon. 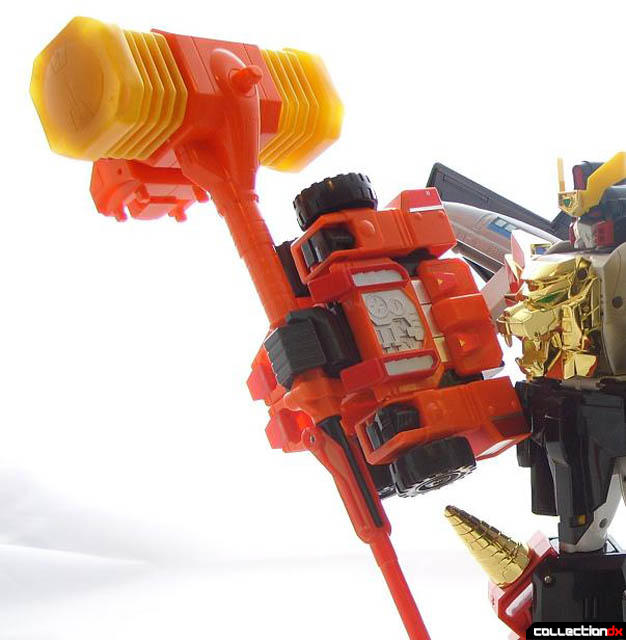 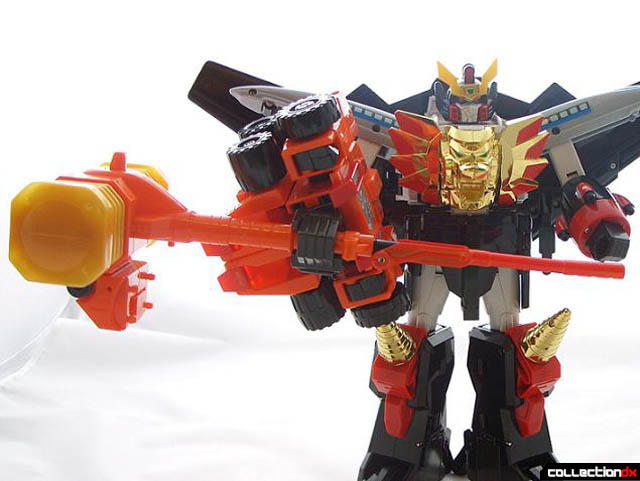 Oh, almost forgot, one last feature is what is called "Hammer Heaven" which is the two pry bar like devices shown below. You can see them in use in the video at the top of the review. 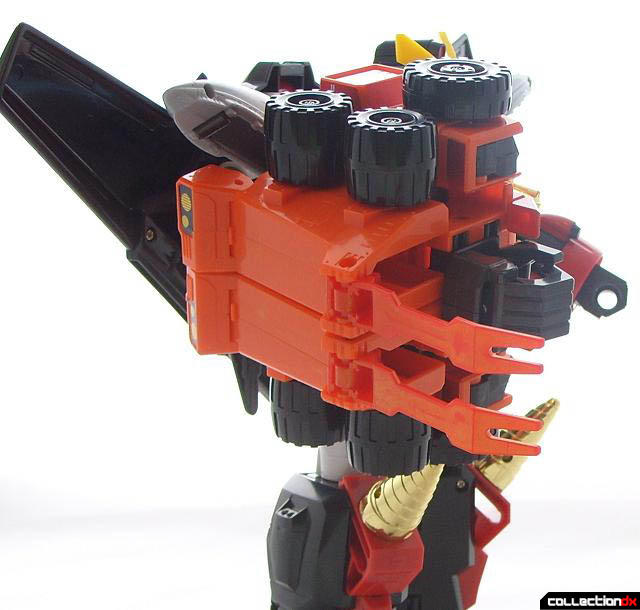 All said and done, I like this toy a lot. It is solid as a brick and will surely last through years of rough play. Fortunately, mine will never see such play. I would suggest if you have Sonkong's re-issue or Takars's original DX GaoGaiGar and do not have Goldymarg to go with it, you should really track one down. You can use the eBay links provided below to help you on you quest to find Goldymarg.

I like it as a stand-alone. But, if it had replaced the entire arm rather than just the lower half I might have been a bit more impressed, since it looks way too heavy to even lift itself much less a giant hammer.

Hi Eva,
I am going to review them, actually their is 4 robots, dumptruck (RaiRyu) and cement truck (FuuRyu) combine to make the yellow and green robot (GekiRyuJin) and the fire truck (EnRyu) and crane truck (HyoRyu) make the red and blue robot (ChoRyuJin)

And I guess you'll look at the ZA POWAA-fuelled cross combinations (was it Rai and Hyo/Fu and En)?
---
Humanity calls out to me, Kamen Rider Stronger, etc.

Great review, Dan! I love this toy. The show kicked much ass, too!

Also, with the Marg Hand on, the joints are plenty strong enough to hold his arm up...and the figure is designed well enough so that he won't topple over from the weight of it. Now, WITH the Marg Hand holding the Goldion Hammer, the end of the hammer's handle should be placed on the ground (or the top of his foot) to keep him from tipping forward.

Yes yes yes! Finally! I've loved all the exposure to the Brave stuff you've done so far, but this is where it's at for me. Unfortunately I wasn't introduced to anything brave related until very recently, (two years ago, I think?) and I'm so glad that you're going to do GaoGaiGar stuff now! It's the only Brave Series I've ever watched, and it's my favorite super robot series of all time! Looking forward to the Ryu combiners and hope that you bother to do the cross combinations. Also, will their be any reviews of the stuff that came out of the GaoGaiGar Final OVA?

Man...am I the only one who found GGG Final pretty terrible? It's like they took the fun kids' show and threw in a unnecessarily convoluted plot and TONS of embarrassing fanservice (read: "cartoon boobs")...just to introduce a more animal-ish GGG design. Pssht.

Dan, I, too, can't wait for your Choryujin/Gekiryujin reviews (even though I already have the toys!).

You most certainly are not. I did, however, think there were a lot of kick-ass fight scenes in it.

VERY true...the animation quality and high-energy fight scenes were some of the best in the series. Not to derail the thread, but did anyone catch the Betterman crossover? I assume that was a separate cartoon series...maybe an OVA..?

GaoGaiGar Project Z, as it was going to be called, a cross-over between GGG and Betterman, was sadly cancelled due to low demand, after the TV version of Final (Grand Glorious Gathering) underperformed, and Sunrise had way better things to do with its' time than walk through such a demographic and licensing minefield (as Bandai and Takara were bigger competitors than ever due to the highly successful Kamen Rider and Machine Robo comebacks).

So, pretty much, there wasn't any Project Z... and FINAL kinda gave us a downer ending, so no POWAAAH OF COURAGE for us in the end. Sad, sad days.
---
Humanity calls out to me, Kamen Rider Stronger, etc.

Wow...thanks for the detailed info, Rankarana! Okay, I'm actually kinda glad it was canned. I liked how the original tv show ended, and I'm fine with calling it a day at that point. The GGG fused with Betterman looked like crap, too.

More an excuse to throw everyone together again than anything else....but who cares! You watch that purely for the great fights! And....*sigh*...am I the only one with the guilty pleasure of actually enjoying GFG's design? I mean, orginal GGG is certainly better, but I liked how it looked. Oh and, for the record, it's still: Genesic GGG > Original GGG > GFG.

Y'know, I gotta admit: I actually dig the basic design of GFG, too. The Phantom Gao is kinda hot...and GaoFar is pretty cool. My main problem is the color scheme. The light blue and grey just TOTALLY clashes with the rest of the robot. If the Phantom Gao/GaoFar were in more traditional Galeon colors, it would've been SO much cooler!!

But honestly, I didn't like the Genesic GGG very much. I just thought it was TOO animal-y. :P

I like the subtle combo of the high-tech vehicles with Galeon in GGG better. The combined GGGG was a little too organic for my tastes.

As far as I know Genesic Gaogaigar is the first and only brave to consist entirely of animals. Most animal braves are pared up with vehicular partners or has a vehicle mode themselves. I feel that the theme of nature and tech kinda gets lost in Genesic Gaogaigar.

Honestly, I'd even prefer GFG *if* PhantomGao were colored like Galeon...even though there's really NO animal theme in that design...

It's interesting that the toys uses the same kind of air projectile system that some G2 toys incorporated. Was the original made by Takara?

Yup, the original is made by Takara, Sonokong has the license and produces the toys for Takar in Korea. The quality is on par with the Takara original and in some case it is better. For example, my Takara King Exkizers plastic quality feels really cheap when compared with the Sonokong re-issue.

I apologize, I didn't make myself clear enough, I should have said that my Takara King Exkaisers plastic feels cheap compared to my other Sonokong Brave re-issues. I hope this clears up any further misunderstanding

Ah ok. Gotcha ;) I do feel that the plastics used in Dagarn feel especially flimsy compared to other Brave series toys. Not sure why...

This is certanly a break from tradition from other Brave toys. Instead of two robots combining to include upgraded arms, legs, chest plates and heads. Goldymarg just forms an arm. But I guess the advantage of that is that it could combine with GaoFighGar and other similar robots in the GaoGaiGar line, while the other robots could only combine with the correct robot. A superb review overall.