Today I will be reviewing the Captain Shark DX re-issue, made by Sonokong/Takara. The sample for review can be purchased rather cheaply from our friends over at Big Bad Toy Store, Please check them out or just click on the eBay links at the bottom of the page for links to help find any live auctions for the item reviewed today.

Captain Shark hails from the anime The Brave of Gold Goldran. Captain Shark is basically a space pirate/battleship in the familiar shape of a shark, hence the name. He has an excitable demeanor with a keen mind and will often play the straight man. His right eye is hidden under an eye-patch until it is used as a targeting scope for the HYPER GALACTIC BURST MODE ATTACK.

Captain Shark is a very formidable adversary, his weapons include:

To start off with, Captain Shark comes to you in the now familiar, beautifully illustrated, heavy corrugated cardboard box shown below. 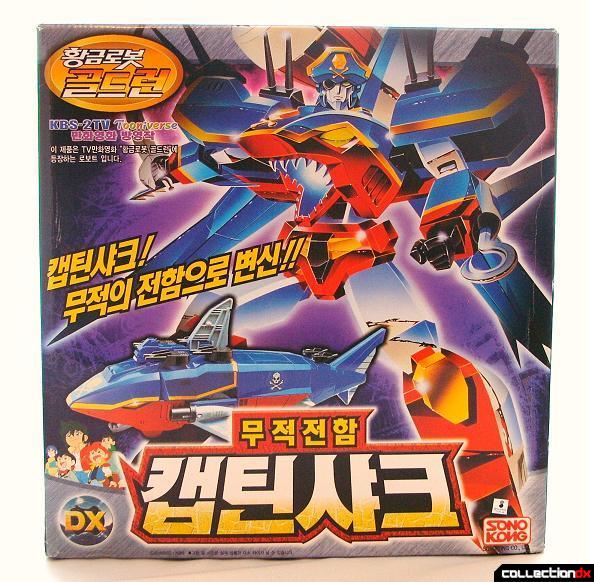 I wanted to show you a close up of Captain Shark's head. Notice the pirate hat and eye-patch. It's an unusual design to say the least. Even though it is unique, who doesn't like pirates and giant robots? They go together like chocolate and peanut butter! 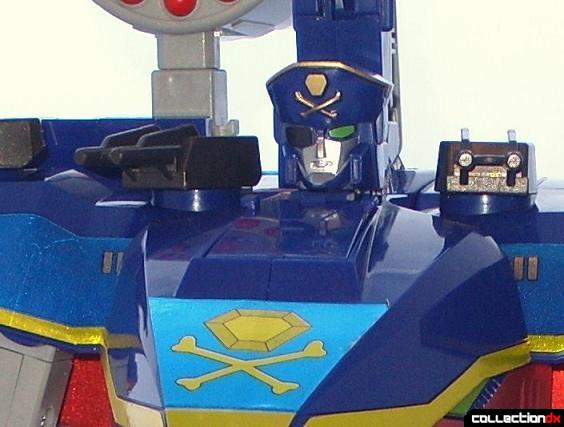 Captain Shark stands approximately 11.5 inches tall in robot mode and made of quality heavy plastic. He weighs in at a stout 1 1/4 lbs. Articulation is limited to the elbows and upper shoulders. 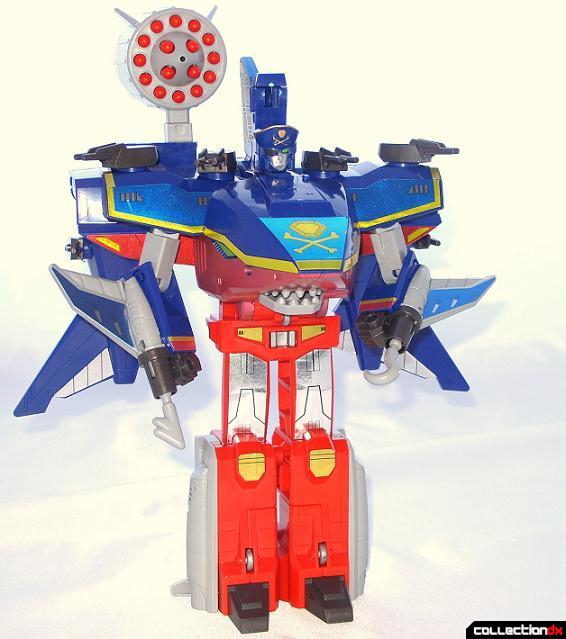 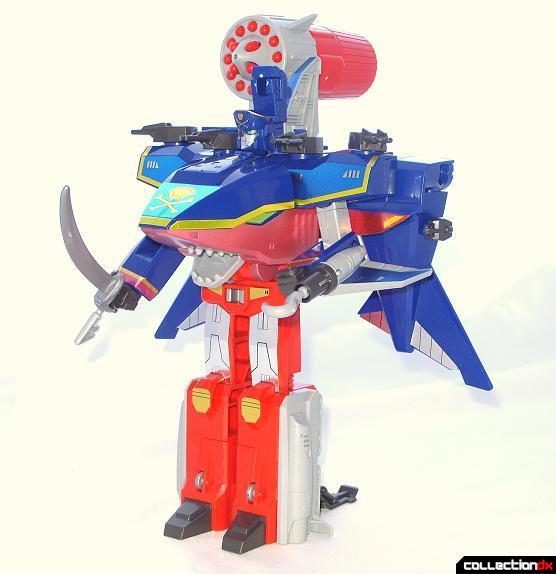 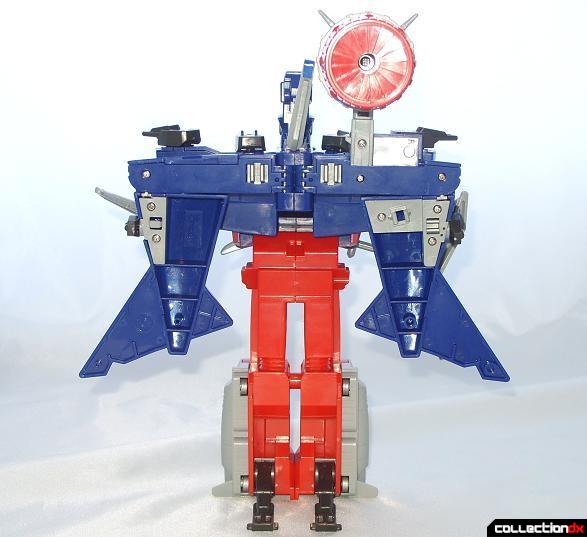 Heck, who needs articulation when you have some much firepower? This guy is heavily armed! His giant shoulder-mounted cannon can fire 16 of the 48 included red missiles by a simple twist of the back of the cannon. But wait, the eye poking goodness doesn't end there! He is also equipped with a wrist-mounted firing harpoon and hook. Also, lets not forget his 4 rotating cannons mounted on both shoulders and his swashbuckling sword. 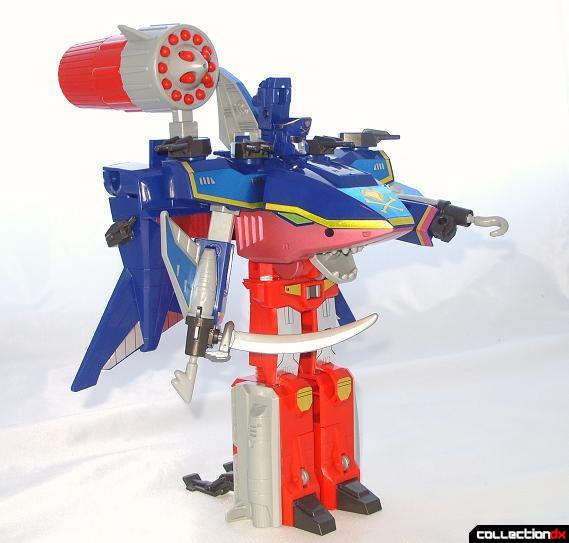 Here is a feature that I really like about the Brave toy line so far, Every accessory has a place to hide. The sword attaches to a clip located on the Captains backside, hook, harpoon and extra missiles store in shoulder compartments, even the cannon mount can be concealed away neatly. The designers really thought of everything. 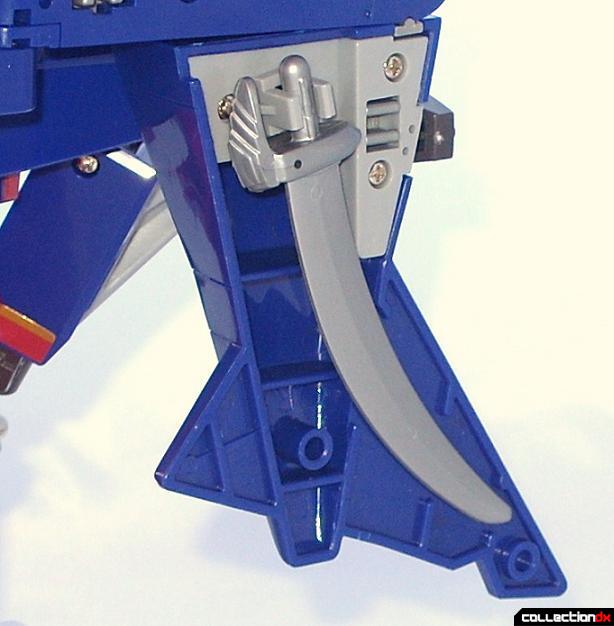 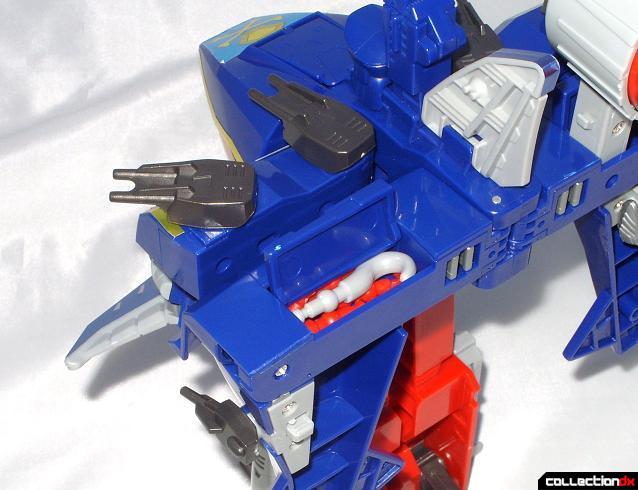 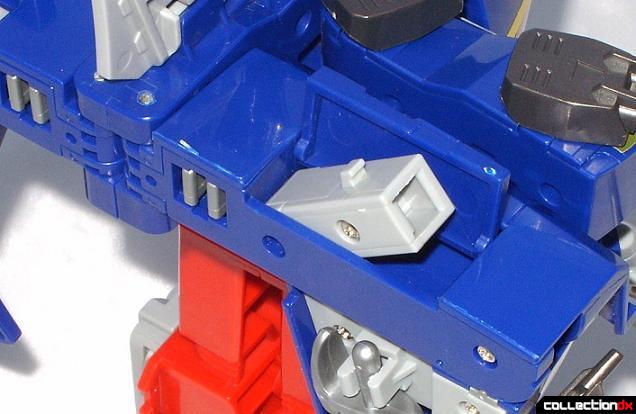 If you don't wish to store the sword on the back of the figure, you can always put it clenched in the Shark's teeth. 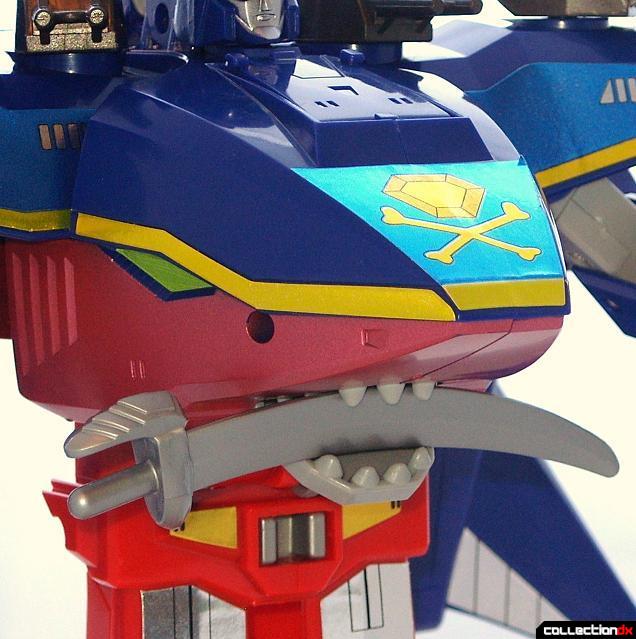 I know this is showing my age, but you older Saturday Night Live fans might get a kick out of my "Land Shark" mode LOL! 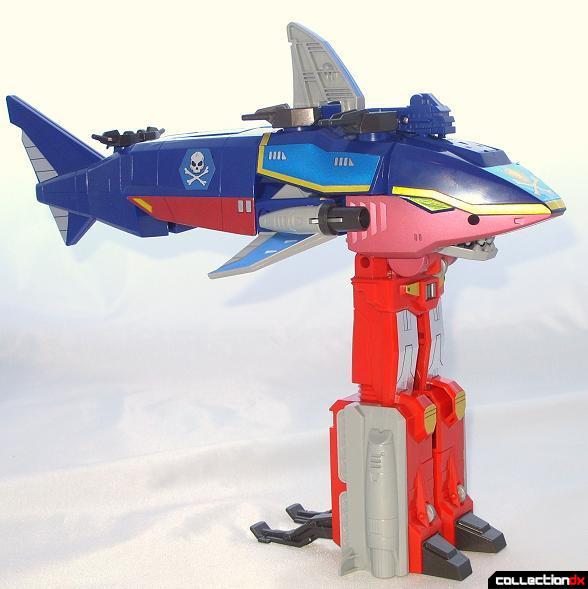 OK, enough fooling around and let's get onto the Space Battleship mode of Captain Shark. In this mode, he actually has two different configurations, Spaceship and what I would call a Shark Tank. In Space Battleship mode, Captain Shark kinda reminds me of something you might see in a Captain Harlock anime. It really looks cool from all angles. I especially like all the guns mounted atop its Shark body. 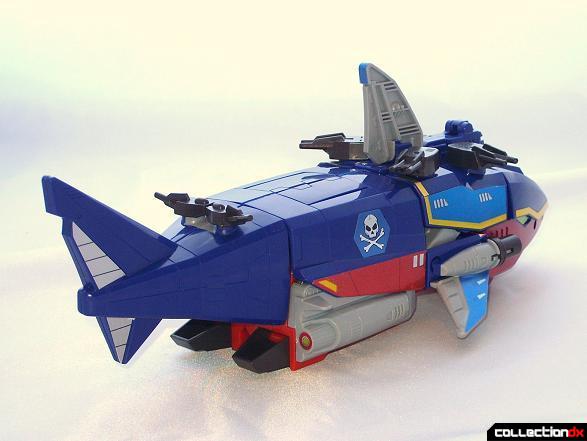 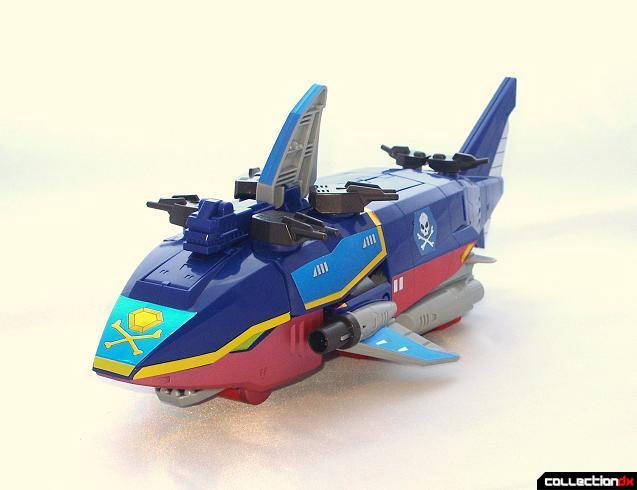 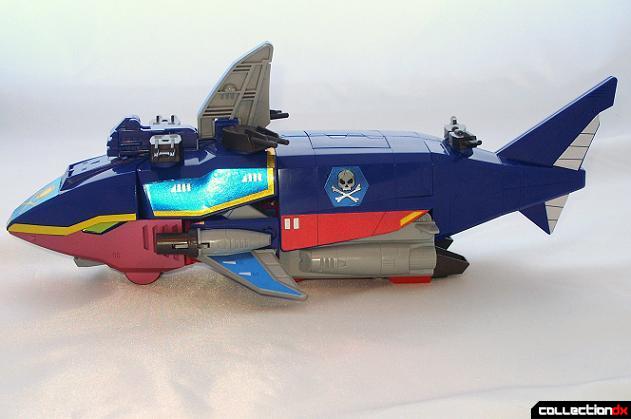 Moving along to the land-based, Shark tank mode. You can see that the cannon mounts atop the body and it now has caterpillar treads that fold out from underneath. 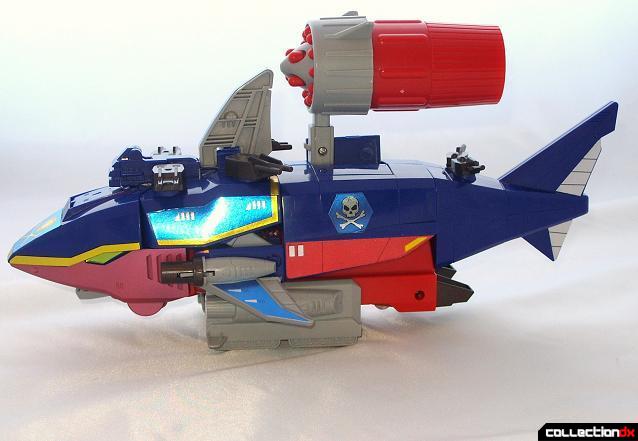 Here is a close up of the caterpillar treads, unfortunately, they do not move. However, it does have wheels on the bottom. I really wish that they put rolling treads on this toy. 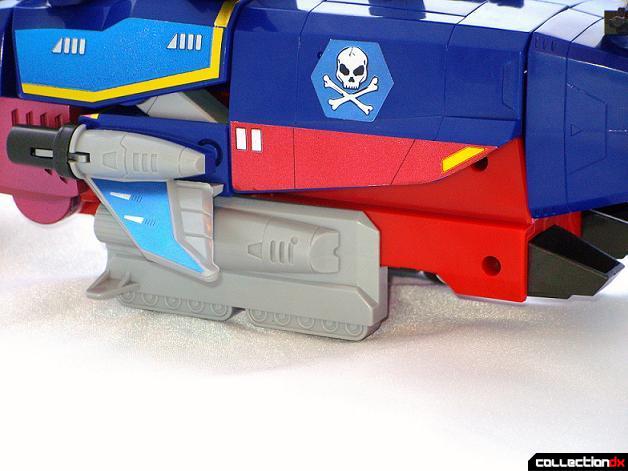 Here is a close up of the bridge area. I think this could have been a lot cooler if they included stickers for the windows. I have been seriously considering doing some custom work to add these. 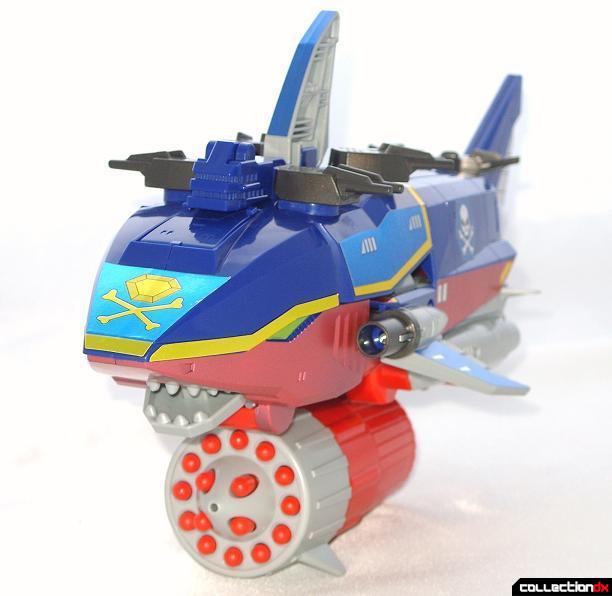 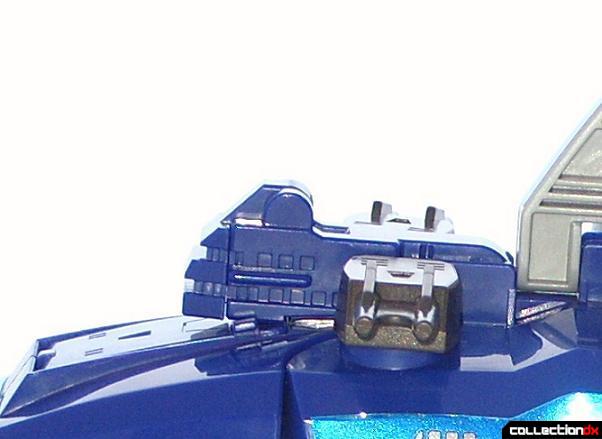 Finally we have the last few pictures. In these pictures you can see that the shoulder cannon can also be mounted underneath the shark body. You would think that the round shape of the cannon would make this very unstable. Surprisingly, it actually turns out to be very stable due to the fins on the sides of the cannon. 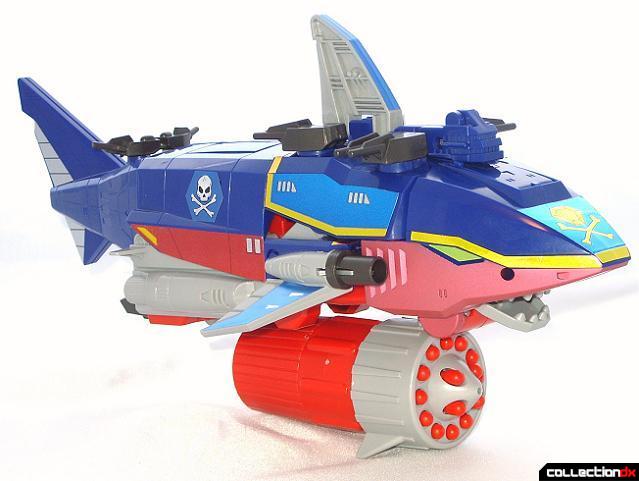 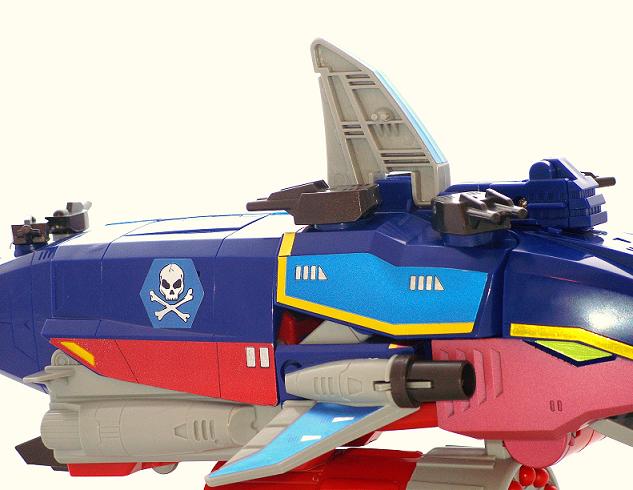 In conclusion, I really enjoy this toy for its design and play value. It is very sturdy and displays really well with my other Brave figures. Furthermore, I think the price of $29.99 at Big Bad Toy Store really makes this toy a steal, so pick one up already!

18 comments posted
I should have told you to

I should have told you to make the summary, "I'm a shaaaaaaaaark" :3

Captain Shark is a perfect example of how I feel about Goldran. The mech designs for the side characters and what not are a lot cooler than the main mech itself. And I second Andrew's thought.

Captain Shark is cool. Walter Walzack even dresses like Harlock in the latter half of the series.Each one of the Braves in this series is based on a type of soldier of different cultures. Goldran is based on a samurai, Sorakage a ninja, Advenger a european gunsmen, Captain Shark a pirate, Star Silver a roman centurion, Jet Silver a european knight, Drill Silver a viking. This series as a whole is very good IMO. Great Goldran also gives off a very ancient statue-y look to me.

Another Brave Toy I'll wind up picking up!

Wow, I want one of these too! Wait, is this an accessory mecha for the hero robo, or a stand-alone-only?

He can attach Advenger (the black train) onto his shoulder peg as a cannon. In the anime everyone (Goldran, Leon Kaiser, God Silver and Captain Shark) holds up Advenger and Sorakage as a team attack called the Hyper Galactic Buster.

Although I don't care for the Robot mode, the mecha shark looks great! Reminds me of some cool old skool Popy or 8T's Super Sentai vehicle.

These Goldran guys don't play, (so to speak,) huh? Eighteen eyeball shattering projectiles is damn respectable. Between this and Goldran even Itano would tell you to scale back.

"I think this could have been alot cooler if they included stickers for the windows. I have been seriously considering doing some custom work to add these."

I disagree about putting stickers on the windows for the bridge's exterior. They won't be that effective for the mecha to stand out. If you're going to customize Capt. Shark, I would recommend painting the windows on the bridge bay area, because adding stickers to it would also be a pain to the fingers.

Easily my favorite Brave toy. The giant support skis are more than made up for by the perfect look of all 3 modes and the firepower.

Captain Shark's powered-up mode is him "wielding" Advenger as a giant cannon. It's a little weird, since it's more or less a giant locomotive just hovering above his head, but still pretty impressive. Advenger is one of the harder Korean Goldran toys to get, along with God Silvarion.

You never sold it? I remember you offered that Choryujin up before (I was gonna buy it but I ran into money problems).

Luckily, I came to my senses in time before anyone ponied up the cash! :P

Hey Jeff,
Your right, Captain Shark is a pretty freakin' cool Brave toy! Now if you could come up with a source for King J Der, Advenger, Tri-bomber, Red Geist, Thunder Dagwon, Dag Base, Goryu, Hiryu, and GouRyuJin, I would be thrilled! I am sure I need a few more figures that I have forgotten to mention.

Yahoo Japan via a Proxy service like Celga is a good option. The conversion rate really sucks right now, but you can probably still get a couple of those at a decent price. In particular, I don't think King J-Der, Advenger or Choryujin sell for more than their retail price. Dag Base might also be available for a decent price. And I don't know if you have God Max, but there was a dead stock find recently of him, so he's the cheapest he's been in a long time.

Gouryujin? shouldnt it be Choryujin (Gouryujin is made up of Enryu and Fuuryu)? And wouldnt you rather have Battle Bomber than Tri Bomber (includes Horn Bomber)? I reckon King J-Der, Red Geist,. Thunder Dagwon, Dag Base, Hiryu and Goryu are the harder ones to get a hold of. Not because they are Super rare (ok maybe Thunder Dagwon's quite rare) but because you have to go through a proxy service to get them. Also add the majority of the Brave police if you prefer the original Brave police badge rather than Sonokong's modded 'ying yang' sign.

Theres actually quite a few differences between Korean releases and Takara releases.

Fighbird: The colours differ on the pre-applied and the ones you have to put on, S Guardion's head is black, missing black paint on Granbird/Great fighbird' head.

J-Decker: All the BP badges and related stickers are changed to have the korean flag symbol, Build Tiger is now orange instead of yellow (same colour as Drill Boy).

And generally the trim on stickers are as good as the japanese versions and sometimes stuff just falls off and refuses to stay on (One of the pegs on my Gaohn that keeps its leg off refuses to stay on and required glue to keep it in place, same for my Shadow Dagwon's dragon head/jaw).