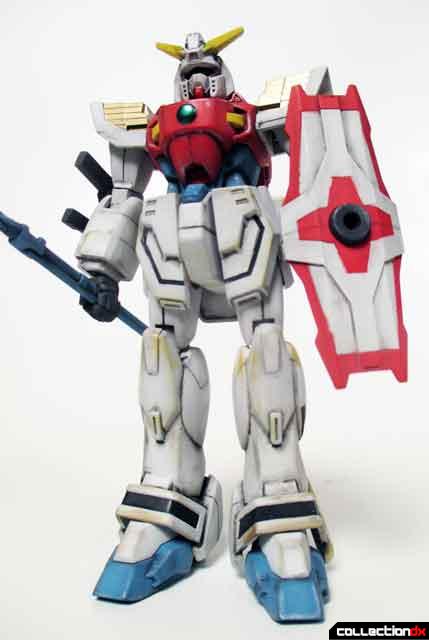 Those Gundam Guys model group got their start when various members would meet at IPMS model contest and enter their Gundam kits. They would over hear other modelers say. “…..Oh those Japanese robot kits…..those must be Those Gundam Guys models….” Eventually when it came time to name the group it was obvious to just call themselves what everyone was already calling them and Those Gundam Guys name stuck. 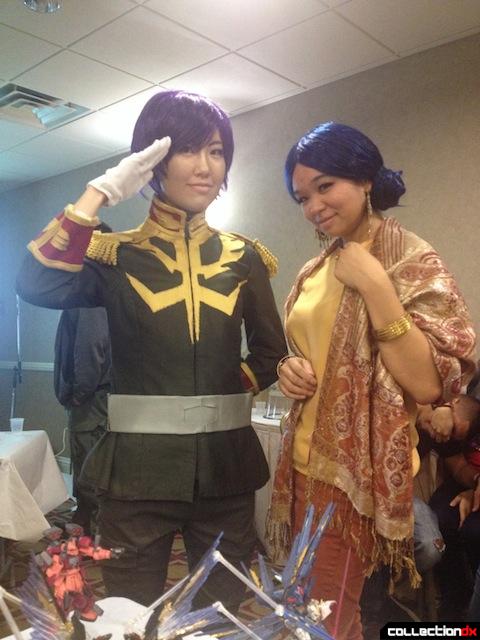 Along with MacrossCon, Those Gundam Guys contest is one of best Anime events in Southern California. Produced and operated by fans for fans, it has a great atmosphere and a good chance to talk all things Gunpla with other modelers. The contest has grown over the last four years and with the success of the last few years will introduce a larger convention room in 2015. 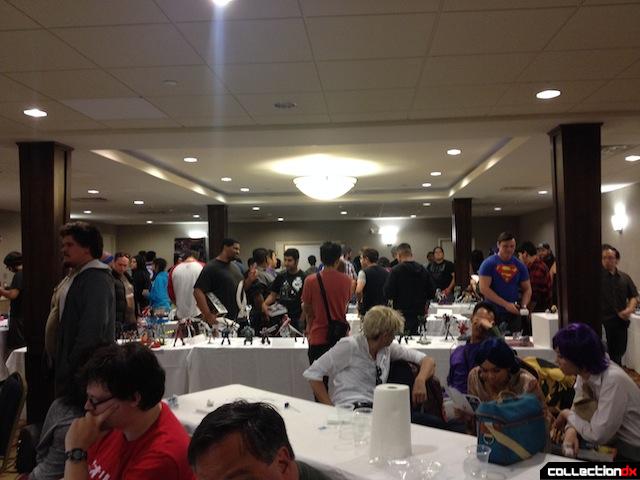 Although I had planned to enter dozens of Gundam model kits the events of 2014 did not permit me to have the time to build Gundam kits like I wanted. But I did finish one Gundam entry for the contest. 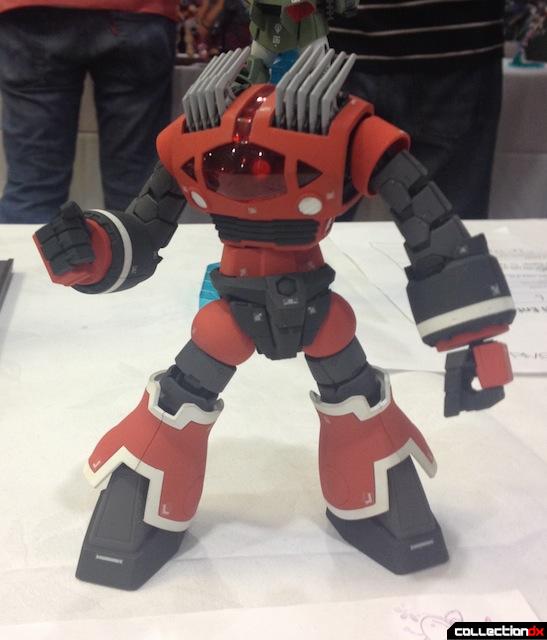 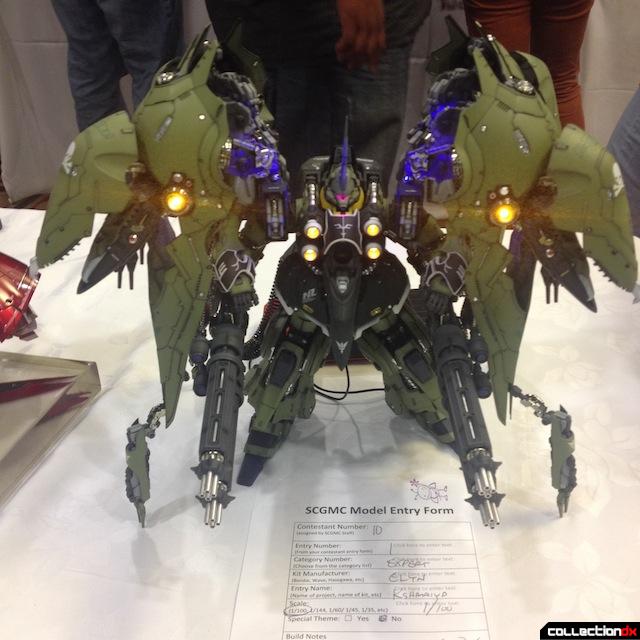 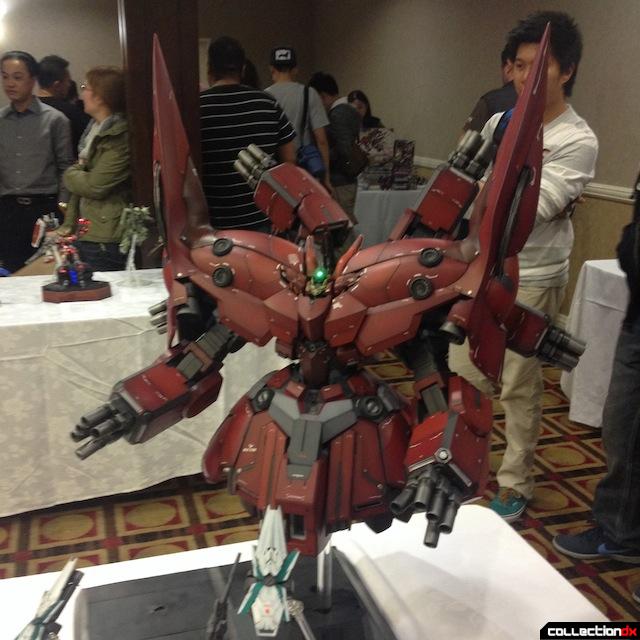 Earlier in year I was visiting a local thrift store and hanging on a peg in the toy area I found two brand new Gundam Kit for $.99 each. Not passing up a good opportunity I bough them both, Rising Gundam and Shining Gundam, each from the series G-Gundam. I was intrigued with these two kits and decided that I would make one of them a SCGMC contest winner right from the beginning. I though it would be an interesting challenge if I could make a small scale Gundam I bought at the thrift store for $.99 from one of the most unpopular Gundam series a contest winner using only the paints I had in my paint shelf and lots of moxie! 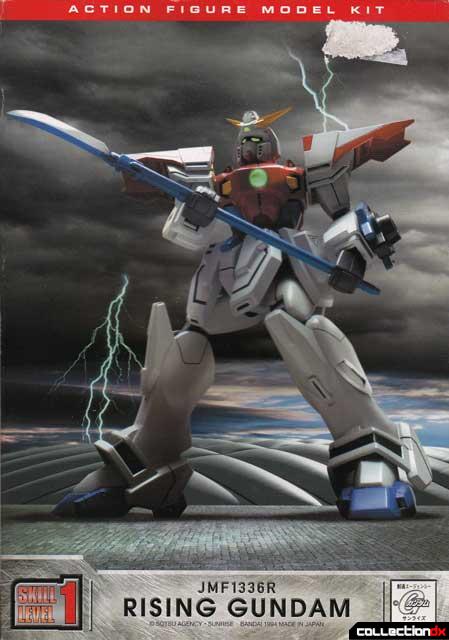 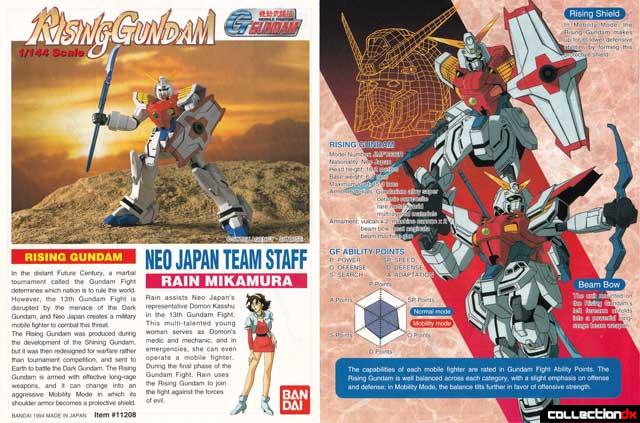 If you read my reviews here I mostly build vintage model kits, usually from 1980s properties. I have yet to see G-Gundam but it is always great to build “modern” kits and see how they are engineered and designed. The best feature of these kits is the component aspects of building these and this kit is no exception. 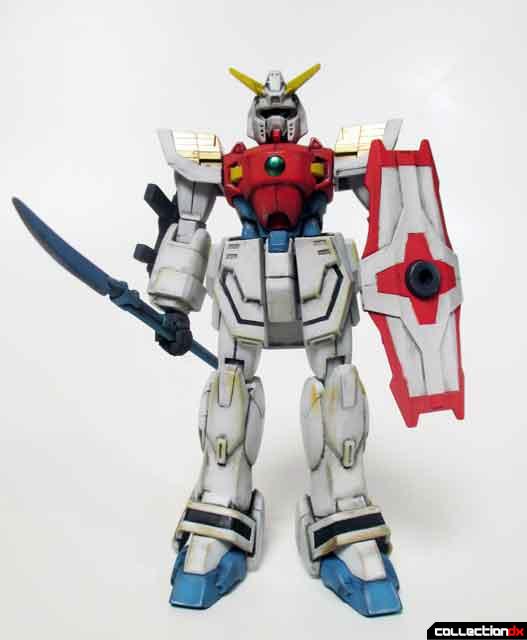 All the arms legs and body parts snap together perfect with no fit issues. All the “colored” parts can be snapped together after painting this includes the blue on the feet, shoulder and hands. The blue and red of the waist and chest areas only needed a slight modification with the connecting pegs so you can glue them after painting. Otherwise all the parts were beautifully produced in a component style. Polycaps are used to firmly snap the joint parts together, and easily dissemble to test part fit.

Overall I believe the detail of the kit is to Bandai’s typical high standards, with the back of the legs being slightly sparse of any details. Shading here will be important at the painting stage. The detail highlights are the head and chest area with lots of fine details. 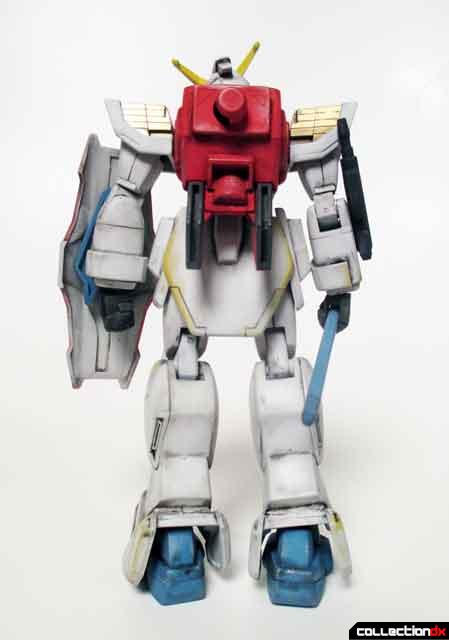 For a standard large anime scale I usually prefer not to build kits smaller than 1/100 scale as one can pour a lot of time and effort into small 1/144 scale model kits and when finished they disappear on the display shelf when displayed next to larger kits. Painting small detailed kits like this can be a time consuming process and this kit was no exception. 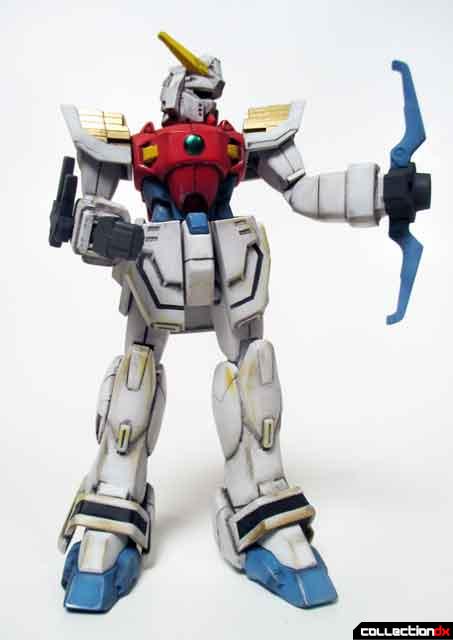 Most all the time spent building this kit is will be painting and masking, so keep your yellow Tamiya masking tape close by if you decide to paint the kit and not use the chrome stickers.

One aspect Bandai did not correct is the Blue color on the painting diagram. The box and instructions depict a dark blue color for the feet and waist, while all the online photos and diagrams depict a light blue color. I had to repaint these colors once I realized they were depicted in the wrong shade. Also, there weren’t any good color pictures of the back of the Rising Gundam in the instructions, which necessitated me originally to look for good color photos from the beginning. 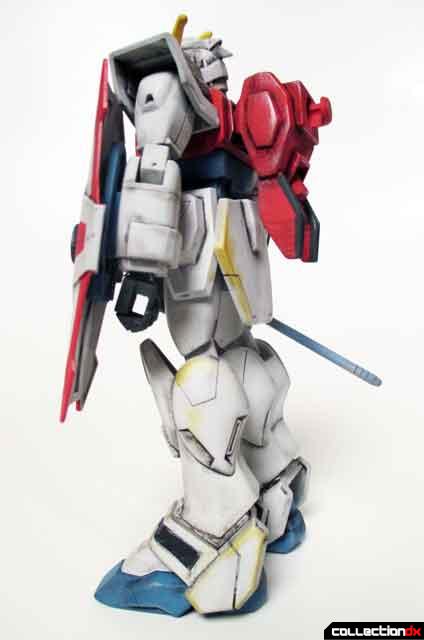 I used Gunze Mr. Color for the most of the painting of this kit with the exception of the light blue which I used Humbrol. The gold on the shoulder, chrome on the lance and green chest dome I used various Alclad paints. 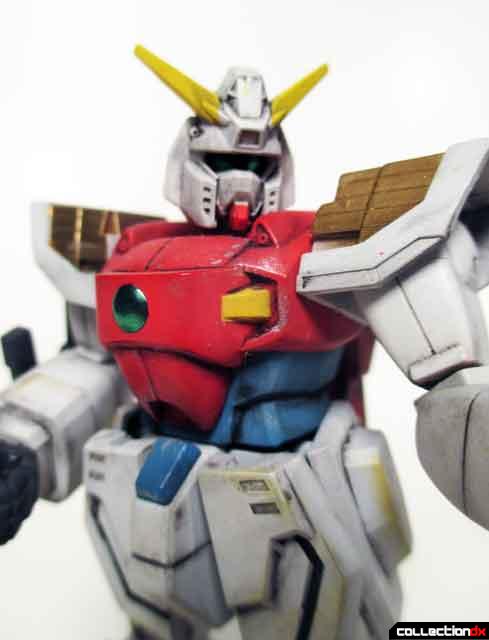 I first painted all the black portions of the kit: the foot guards, hip plates and areas needed to be chrome such as the Gold on the shoulder and blade. Alclad is a special process where gloss black needs to be sprayed first before the chrome is applied. Once these areas were painted I painted the light gray overall and finally lighted the light grey with white and spayed inside each panel. This gives each panel depth. 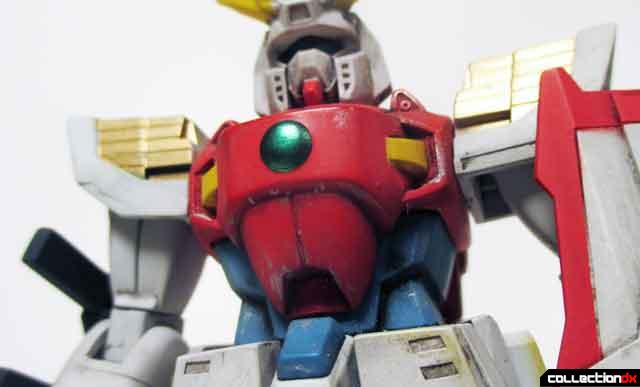 The final details include painting the yellow on the chest and head, and grey on the hands. The chrome green dome on the chest was done last. I made a special mask at work in the exact diameter of the dot and applied it to the kit. Gloss black was sprayed, then chrome Alclad was spayed. Finally Tamiya clear green was spayed over the chrome. This was a three-day process but the result of my patience was a very beautiful green chrome dome on the chest. Painting the kit was a chore that lasted a few weeks but overall I was happy with the way the kit turned out. 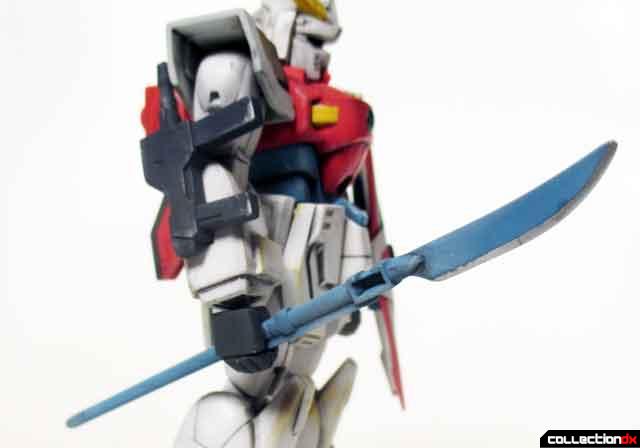 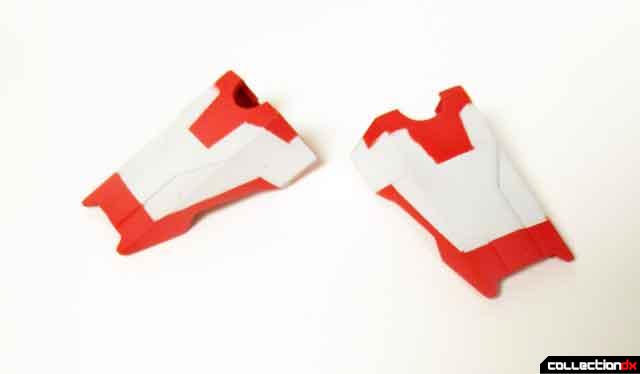 Weapons include a shield; a bow in both collapsed and extended positions, a gun, and spear. Although the shoulder shields extend into the shield it is represented in two separate configurations, the expanded shield and as two pieces to be snapped onto the shoulders. I did not want to snap the pieces onto the shoulder, as I would scratch the gold chrome on the shoulders, accordingly I only display the shield on the arm. 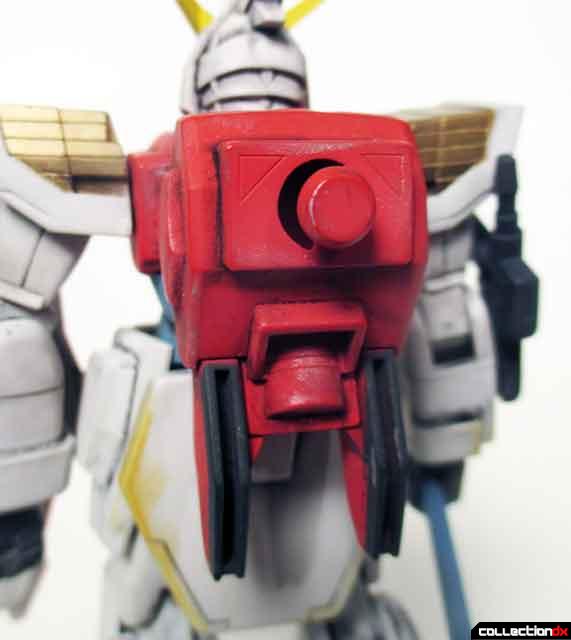 The jet backpack comes with two parts one with a place to snap the spear to the backpack and one without. There are also some other various parts that are included with the kit but have no idea what they are used for.

After finally assembly I did my usual wash of oil paints, Tamiya weathering compacts and silver pencil ships in various parts. I only used the chrome sticker for the eyes. I originally wanted to paint them but I ran out of time for the contest and was forced to use the eye sticker. Overall I’m glad I went with the sticker, as it looks great on the kit. 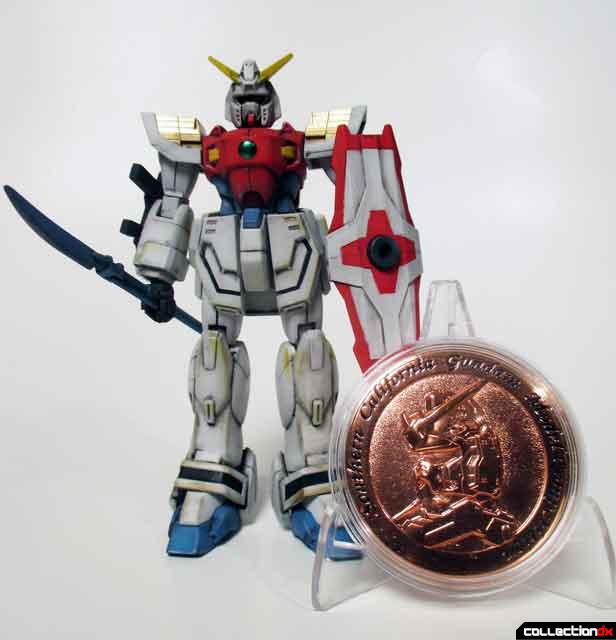 I entered the kit at Those Gundam Guys contest in November last year and I was blown away at everyone’s overall skill level improvement at the contest compared to previous year. This was not going to be an easy contest to place in for anyone at the contest, so I was blown away when my Rising Gundam took third place in its category of 1/144 scale kits. I was more than happy to take third in this populated category as the level of detail of everyone’s kits were amazing. 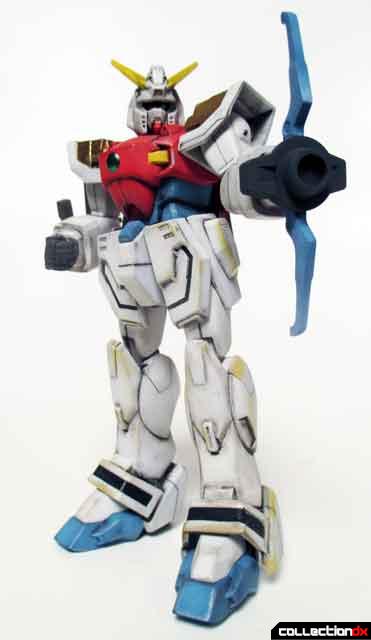 Although I am not a small scale Gundam builder, overall I was impressed with the fit and details of the kit with the complex masking taking the brunt of this build. Typical for Bandai Gundam kits its fun for first time builders who want to leave it unpainted and use the stickers but complex and challenging enough for advanced Gunpla builders to do their detail work. Highly Recommended.

©2015 pictures and review by Leonardo Flores and CollectionDX

That's what we used to call those 1/144 scale kits from G Gundam and Gundam Wing. I guess my only "complaint" would be the weathering. In G Gundam the Gundams are supposed to be all bright and shiny. BUT, as a retort you could hold up that third place coin, which is pretty darn cool. G Gundam is actually a pretty fun series and I recommend it to people that say they don't like Gundam because it's tone can be quite different from the usual war setting. Nice work.

Believe it or not G-Gundam was one of the top three expanded universe Gundam series I wanted to see because it is different than the others. I have it on my Ebay watch list just need to buy in soon. What I've seen it looks like a very enjoyable and fun series.

Nice name as a category! I kind of wanted to display it after a drag down knock out fight hence the weathering.

Yes those Gundam trophy coins are beautiful, it was the first time I had ever entered a model contest with the hopes of winning that coin! You must see them in person!