For a while I’ve been contemplating a project – going back and opening and reviewing each and every one of the 1995 Star Wars Power of the Force figures that I have in bins up in my attic. I don’t want to drive away our readers with those toys, though.

I sort of liked the vehicles, however, and prior to selling them I took some pictures and thought I would reflect a bit on these times.

Back in 1995 toys for me were quaint nostalgia. I was still an avid comic book buyer, living on my own, single and loving it. Actually, during this time I was sharing a house with fellow CDX’er ATOM, which was right next door to a comic shop.

I’d pop into stores now and then to see what was up, but never really bought anything. That was until I saw new Star Wars toys. As a child, Star Wars was my thing  - but then I grew up and it went away. It wasn’t like now when you have the same toy lines on the shelf for 15 years. Toy lines actually stopped. So for me to see the new orange carded Power of the Force toys on the pegs at Toys R Us was pretty amazing. It sparked something in me, and I began grabbing each one I could find.

I had no internet at this point.

Looking for figures became my social activity. My friend and I would spend all evening visiting the 24-hour Wal Marts looking for new figures on the pegs. It was an obsession. We didn’t know when new figures were going to hit, we just waited until we stumbled across them. It was there that I was indoctrinated into collector culture. It was there I learned about variant packaging, bending the corners of cards, and ultimately - scalping.

Those first waves are actually nostalgic for me. They featured the most iconic characters and the most iconic vehicles, some pulled from the same molds. Sure, Luke and Han looked like they overdosed on steroids, and Leia got hit with the ugly stick, but they were new Star Wars toys on the shelves, and they were mine. 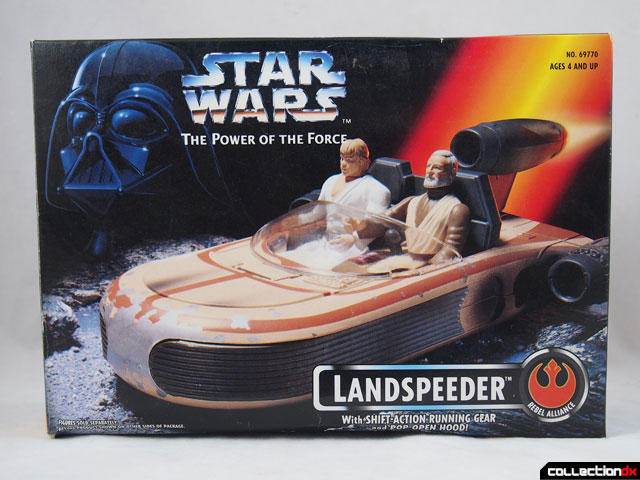 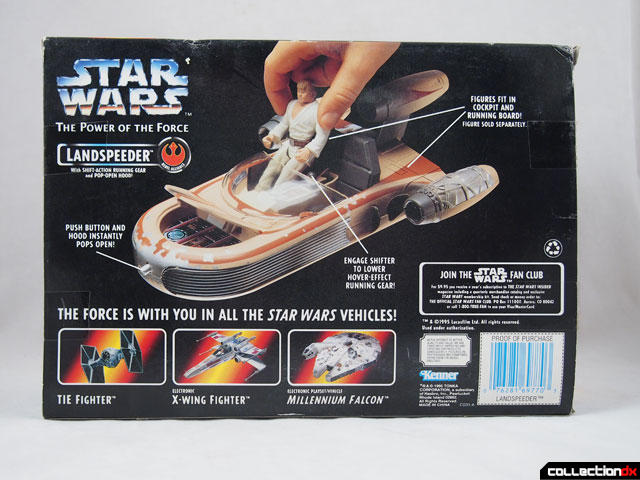 The Landspeeder was one of the first vehicles I purchased. 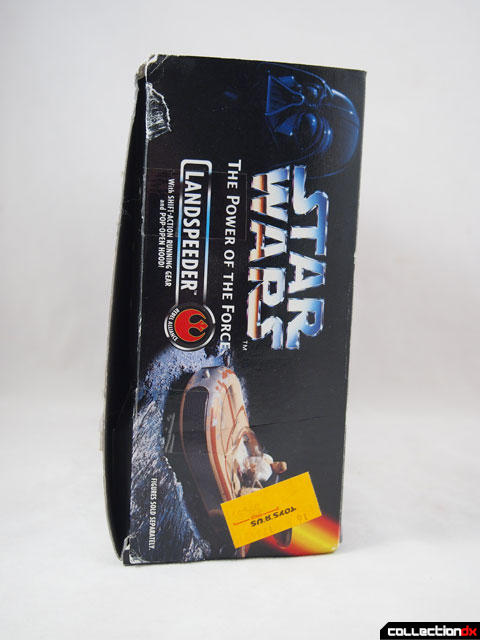 Kenner had the right idea at the time, at least with the vehicles. They took the old toys and re-issued them with new paint applications, decals, and even mold changes. They were familiar yet new. 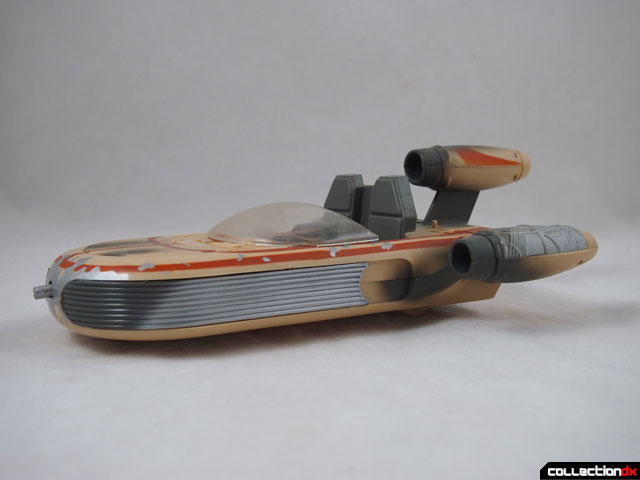 The Landspeeder is about the same size and shape as the classic. The color is obviously different, but the base mold is the same. Changes were made to the windshield (more streamlined), seats (now with detail), and one of the engine pods has exposed circuitry. Small amounts of detailing have been added to the surface. 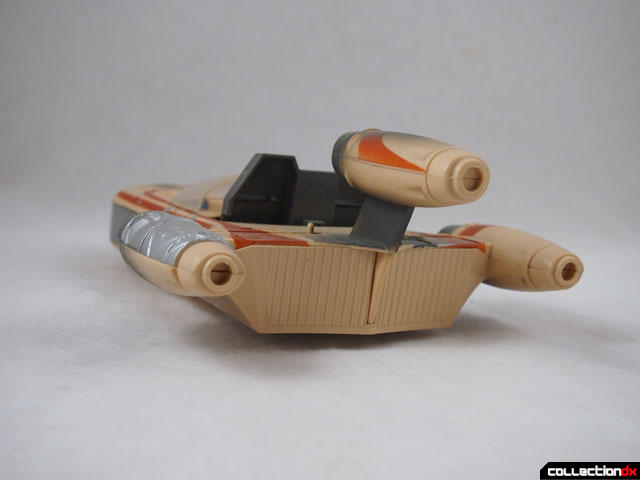 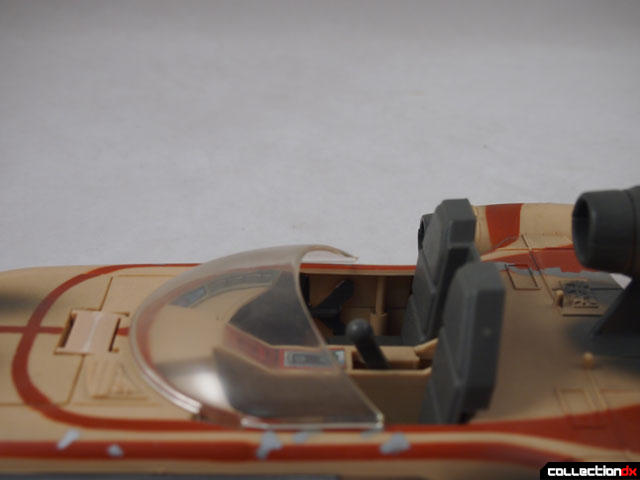 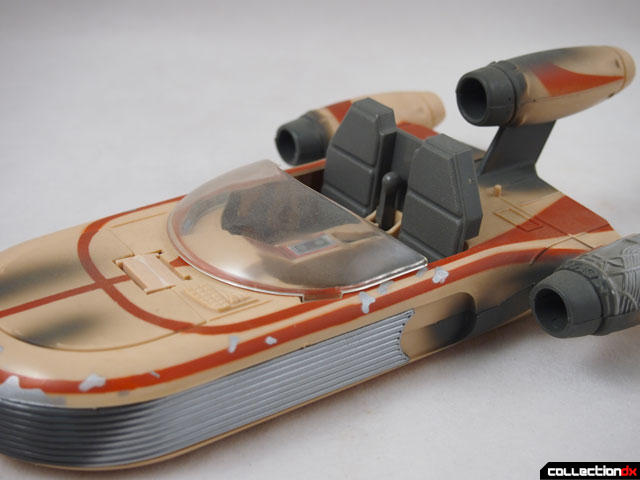 What hasn't changed is the main gimmicks. First, the engine hood still pops open by pressing the button in front. 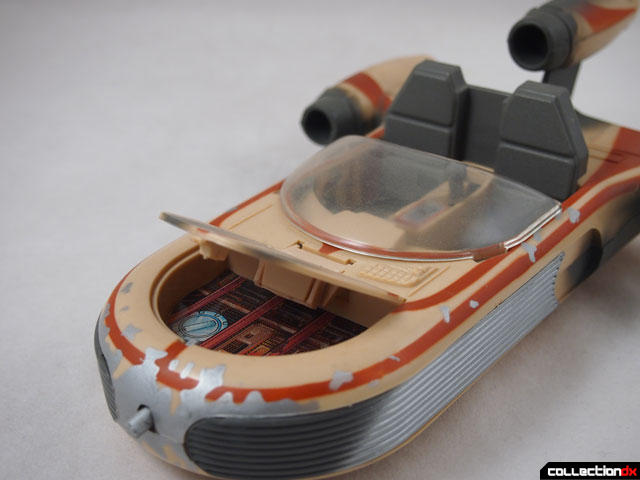 Second, the "levitating" action remains unchanged. The Landspeeder rolls along on three spring loaded wheels. If you move the lever in the cockpit the wheels retract into the body. 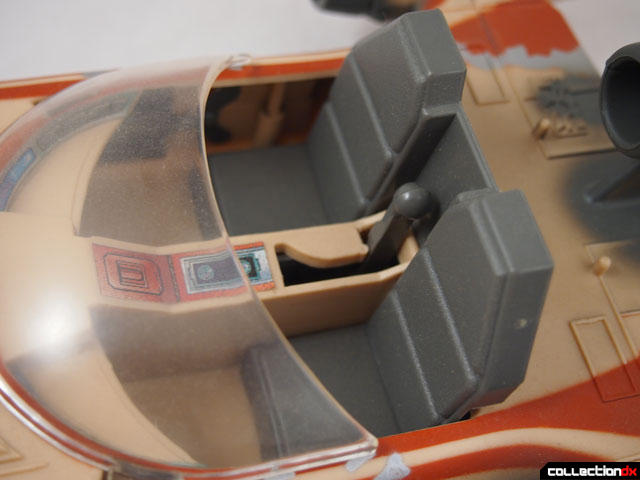 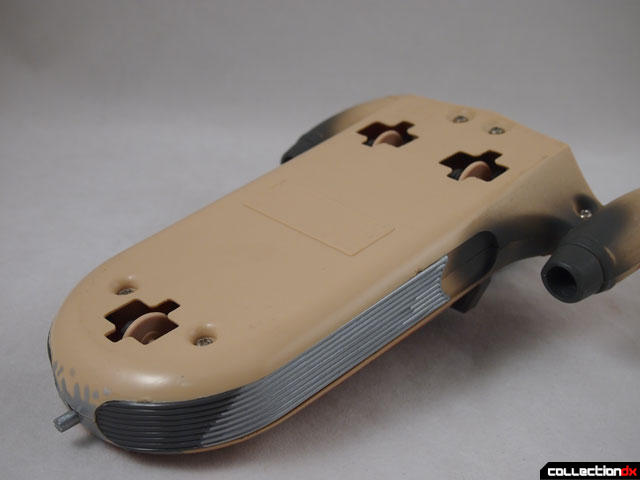 Kenner hit a home run with this re-imagining of vehicles and they still stand up as high-quality playthings. Hasbro has since released all new Landspeeders that are more movie accurate, but to me this one bridges the gap just fine.

We were all waiting for these new star wars toys to be released in the 1990's and you can't imagine our huge disappointment on how bad these figures looked. I don't mind restyled vintage toys especially for the vehicles but in the end I will always put the originals before the replicas so I was also out with these new vehicles although I'm suer some kids had some great fun with them.

The worst part was Kenner's arrogance when they were saying "This is what the toy market wants, these muscle style figures" and the Toy Collector magazines lapping up the BS press release propaganda.

These toys were very bad and Kenner's arrogance took the sail out of buying new Star War toys for me.

I can't speak for anyone but me but I would EAT UP JoshB reviews of all these figures. Seriously,do it!

Coincidentally,I just found out about this comic strip on Rebelscum a couple weeks ago. It's about POTF scalpers back in the 90s. Pretty funny stuff IMO:
http://www.thewebcomicfactory.com/2010/11/08/dealers-1-1998-was-the-year/

I agree would love to read all the review.

I remember when these cane out and I was at Toys R Us and I saw some bearded 40 something all nerd-ed out trying to explain all the "rare" versions to some unsuspecting young couple. It was a bunch of worthless info in the long run!