The RGM-122 Javelin is a mobile suit from the 1993 anime Mobile Suit Victory Gundam, but more important to me is that it is from the wonderful toyline “MS in Pocket”.

As far as I can tell, MS in pocket was the first time Bandai attempted a line of smaller, poseable action figures for the Gundam line. Everything before that, aside from High Complete Models, were just that – models. The MSiP line brought a very toy-like aesthetic to the Gundam line.

Each toy is made out of hard, high quality plastic. The finish is glossy, with stickers for detail. All are in a common scale, each is numbered, and all have similar packaging. 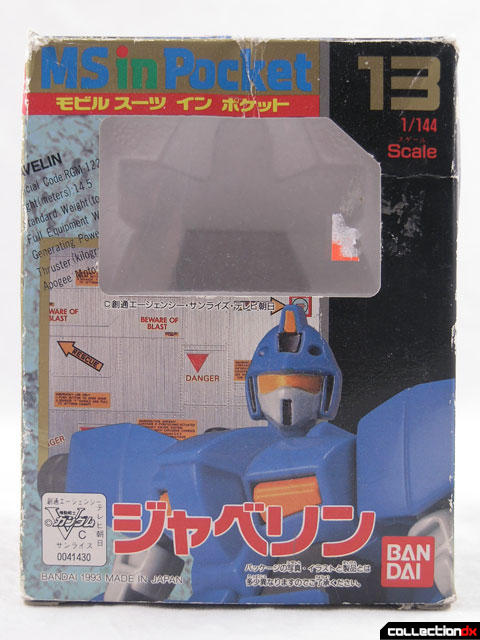 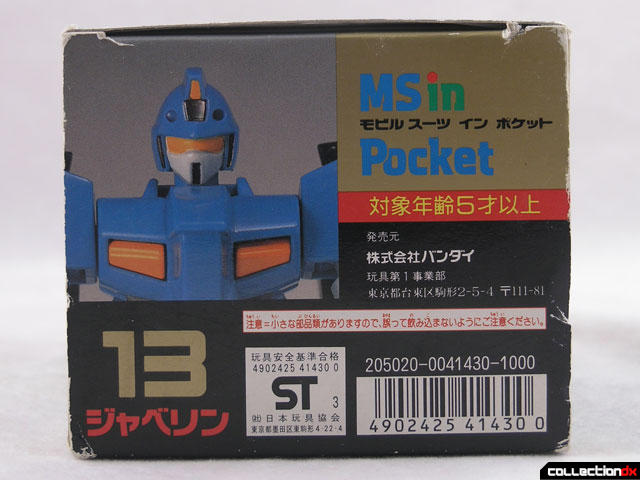 The boxes are great. Early 90's Bandai boxes are really great, with fantastic illustrations and product shots. Each one of the MSiP packages had a die-cut window so you could see the figure inside, resting in it’s Styrofoam tray. The clear window was not cellophane, but rather a solid piece of thicker clear plastic that rests against the tray. Various spots are cut out of the tray to accommodate accessories. Accessories are usually on a sprue, and need to be assembled. MS in Pocket are very much toys, and are constructed like such. There are no dynamic poses here – the toy has a simple, neutral pose. There are enough joints though to make it fun to mess with. Some joints are tight, some are not. I’ve noticed that as MSiP get older, the ball joints get looser and looser. The teal blue Javelin is striking because of how much it doesn’t resemble a Gundam. That and the two large Javelin cannons on the back. That’s one of the more appealing aspects of Victory Gundam for me – the fact that many of the toys don’t look like Gundam at all. The Javelin’s primary weapons are also the primary gimmick, the two shot lancers on either side of the backpack. Each connects to the backpack by ball joints, which unfortunately pop out easily. The lancers can swing under the arms and the tips can extend, making for a formidable looking weapon. Handles can also swing up, but I cannot see how they can attach to the hands without the backpack disengaging. Other weapons include two rifles, a beam saber, and a translucent energy shield. It's a great looking toy. Never heard of these. They seem like fun little action figures. Do you know if they made 0079 Gundam figures?

As far as i know they just did V Gundam.

I follow almost every Universal Century Gundam but never heard of MS in the pocket... Great finding, Josh.

I loved these little guys (got three different figure in the line) but like you said, with time, they become completely floppy. I can't even stand any of them up, honestly. The Contio is the worst (which kinda sucks, 'cause it's my favorite). If they could stand the test of time, I'd hunt 'em all down. Really fun, but no good for posing.

Big oval shapes with a bunch of thruster nozzles sticking out of the legs and backpack; this is basically a Vifam stunt-double with head gatlings.

I was never too interested in older toys, but this has changed my mind. If I ever get the chance I'll have to pick up the next one I see. This looks great, it's hard to believe it's from '93. This easily trumps most MSiA figures.

Yeah, MSIP are neat and all, but you may be singing a different tune once you actually handle one. The majority of them have completely static skirt armor, elbows and knees that bend less than 90 degrees, thrusters and antennae that just plug into a hole with nothing to hold them there. They're more toyetic than action-figure-y in some ways, sure, like the hard plastic and all, but they also have a lot of the shortcomings of older Gundam model kits, and their obscurity is somewhat deserved.

Well, it's all about expectations for me. I know that one of these wouldn't be the best figure, but they're good enough for what they are. Almost each MSiA looked like the greatest thing ever... and then, well, I picked them up. I wouldn't expect much of one of these, and my expectations would be fulfilled. MSiA and Robot Damashii are better toys, but they always disappoint me.
And I'm used to model kits, so lack of articulation doesn't faze me at all =D

It's not so much the lack of articulation, but the fact that, if you use any of it, the figure will eventually be completely floppy. I can't even get any of mine to stand.

This is such a perfect sentiment to describe people's reactions to so many modern toylines.

Anyway, by comparing MSIP to model kits, I mostly meant the thrusters and stuff that need to be glued in. The V Gundam 1/144 model kits had a lot more articulation than the MSIPs, though they had a really horrible polycap joint system, and of course they don't have the satisfying weight and sturdiness of the MSIPs.

My favorite one is the Abigor. I even picked up two of them.

Price is usually the last numbers above the barcode.

I posted up scans of the catalog that came with each toy in my article here:

You can see the original prices for most of the line; Javelin, V2 and Contio, I don't know offhand.

I love these toys, as they kick-started my interest in Gundam. Thanks for the review.