The very idea of Aliens toys for children is a little strange. What child was into Aliens? What child was allowed to watch Aliens? I mean, other than me and my friends?

More than five years after the disturbing, violent, R-rated film was released, Kenner created a line of Aliens toys for children. This was well after my time as a toy-buying child, so the toys weren't on my radar.

It occurred to me recently that there must be an older Power Loader toy, and there it was, plentiful and cheap on eBay.

The Loader comes in a lovely painted box. 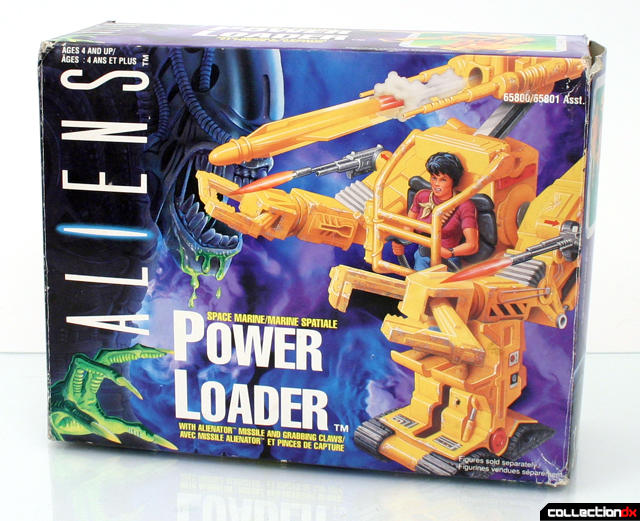 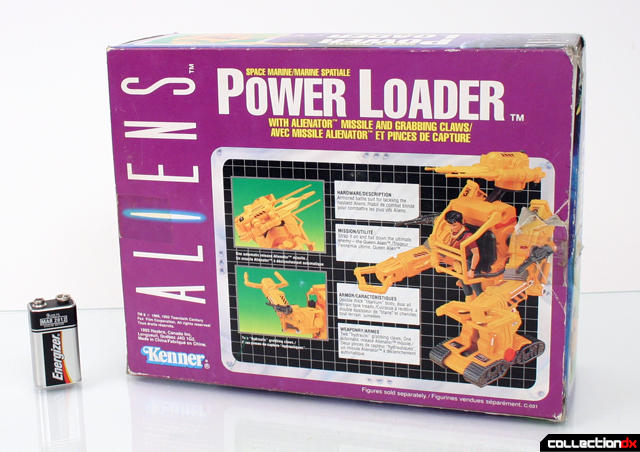 Inside, a corrugated sleeve. 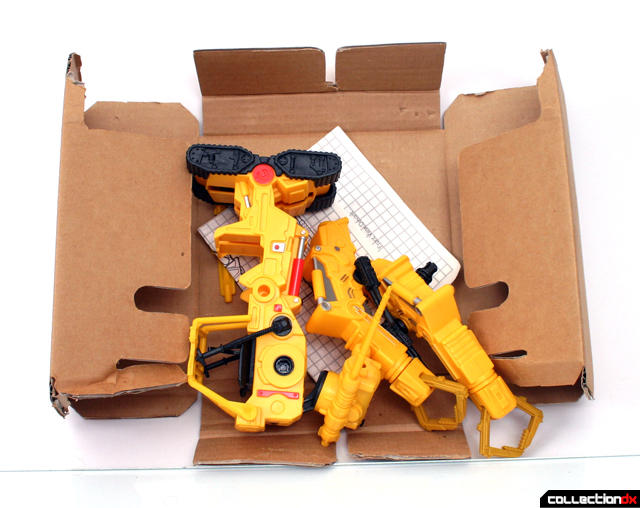 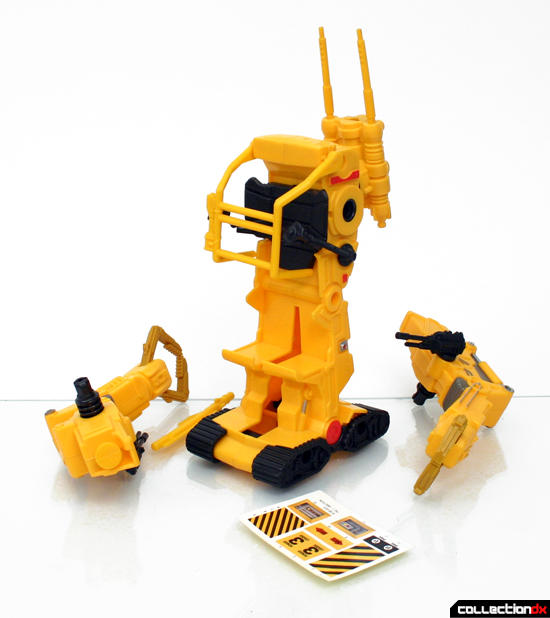 The resulting toy is surprisingly satisfying. Sure, certain liberties were taken to simplify the design. The legs have been combined into a single platform on tank treads, the forklift-like arms are reduced to simple claws. If you were to look at the toy and movie loaders next to each other, the toy looks ridiculous, but by itself it nicely captures the essence of the movie version. Paint apps and molded detail are above par for the time.

Decals still came standard in 1992, and they really enhance the Loader's appearance. 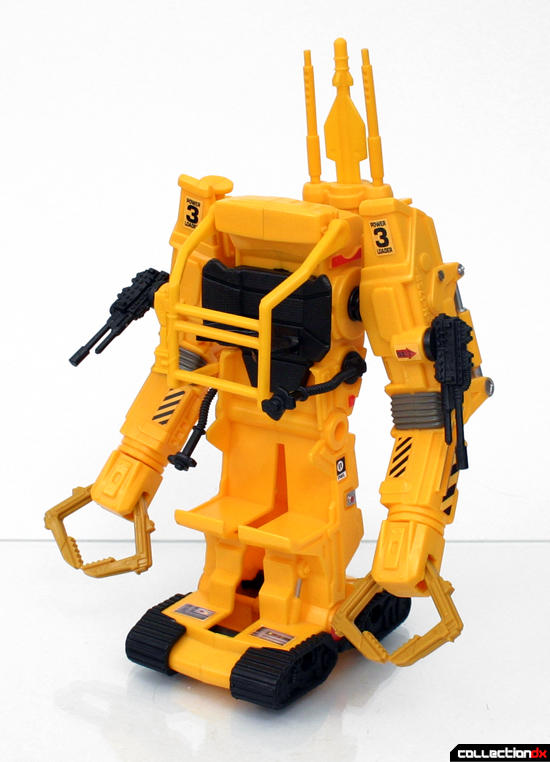 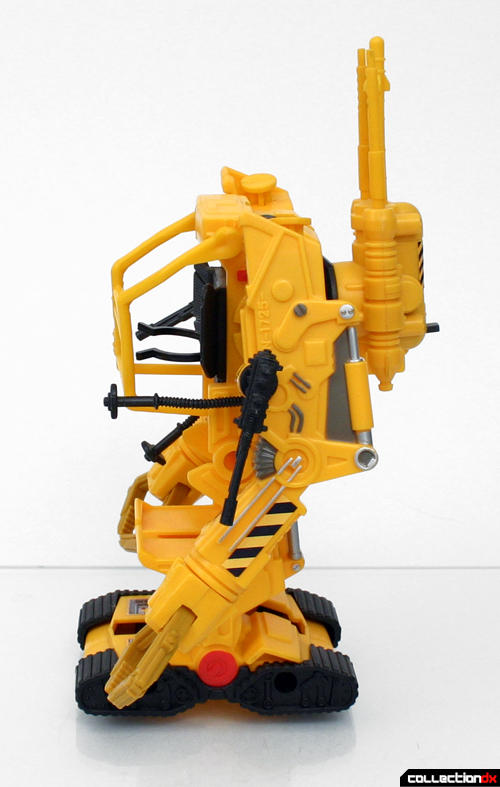 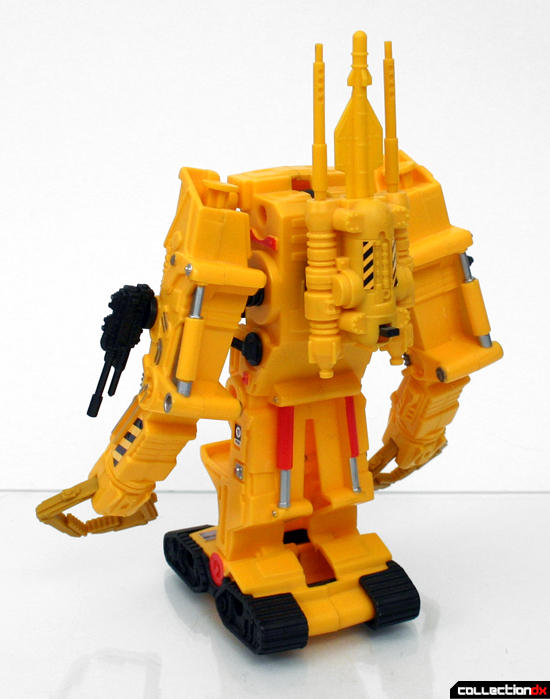 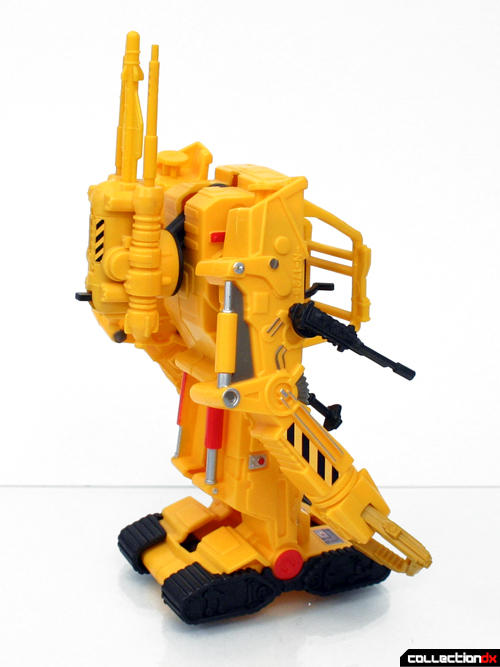 The arms rotate at the shoulder with heavy detants. 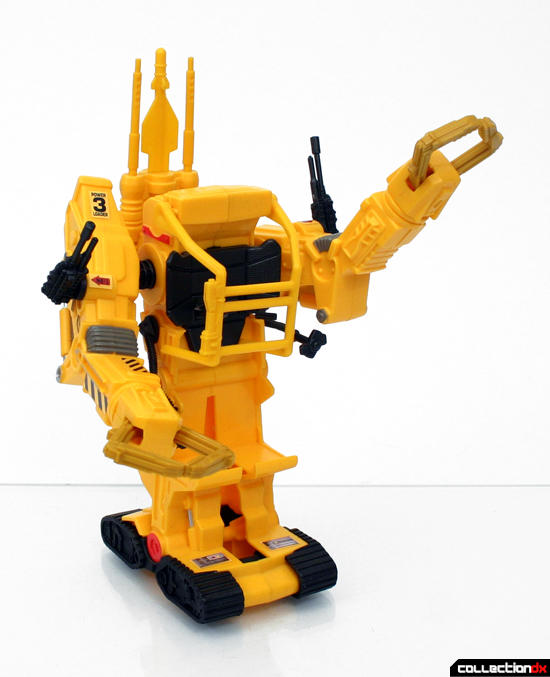 A cannon rotates into place from the back. It fires a spring-loaded missile. A plunger at the shoulders opens the claws when depressed. 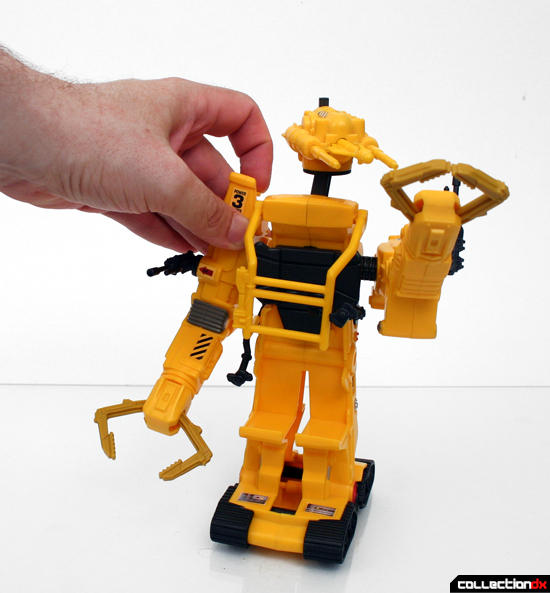 A fine, fun toy, but it's missing something. A pilot.

Ripley comes on a huge card. 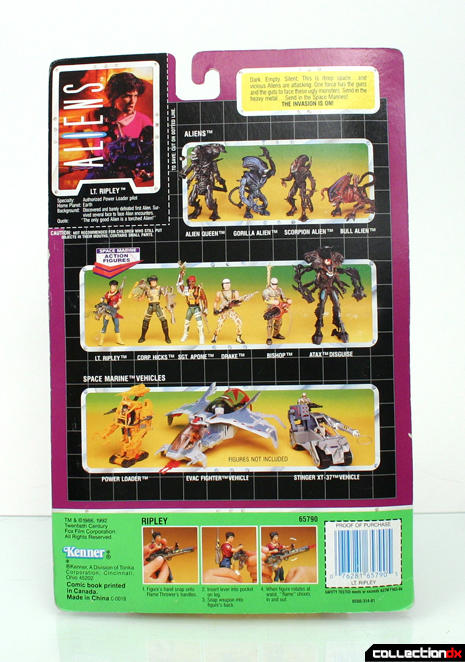 Ripley is pure-nineties blah. Paint apps are fine, she barely stands. The entire figure is dedicated to her weapon gimmick. The gimmick is neat, though. You see that pink peg going into her pouch? That peg is connected to the "flame" inside the gun, so that when you pivot the figure at the waist joint (!) the pink flame comes out of the barrel. Not a bad gimmick or figure, but when you strip away the gun you're left with this. The perma-posed arms and legs don't bode well for piloting a vehicle. While Ripley fits well enough inside the loader, her pose makes her addition awkward. She can even hold one of the handles, and she's always turned to one side. Not great. But not awful either. It's a big sturdy fun Power Loader toy. It does everything it needs to. It's a slam dunk as a child's toy, and it displays well in an adult collection.

8 comments posted
I wanted that Power Loader so

I wanted that Power Loader so bad back then... and then I found out the legs didn't move, and I banished from my toy list(s) forevah.

(I'd never seen any of the movies until I was well into my 20s. So I was wanting this toy even though I knew it came from a movie that could easily scare me.)

I gotta hand it to you, you come up with the coolest out-there stuff to review. You take forgotten stuff and make it desirable. I actually clicked on the ebay link at the bottom of the review and then thought to myself... "What am I doing?" Good stuff. Very entertaining

Thanks! For me, the "what the hell am I doing" usually comes sometime after "submit bid."

To me this is a great example of the stuff I dislike about a lot of toys made for kids. They destroyed the design from the movie. A great design done by some of the best designers in the world, like Syd Mead. Why a toy company, handed such an iconic amazing design would then take the liberty to rework the hands, the arms, and worst of all, meld the legs together is beyond me.

To me stuff like this screams, "They're stupid little kids and they won't know the difference and we save a nickel on plastic costs by giving it tank treads and kids like tanks, right?". Man, why couldn't they just give us the toy from the movie? Sure you have to beef it up so it won't break in half but come on. It's just laziness. The bare minimum to get something out there to sell. An absolute waste of an opportunity to really make something great.

Good review! It's good to see this stuff so that we don't repeat the mistakes of the past :) This kind of thing just gets me fired up LOL

I always wanted this toy so that they could do battle. Thanks for the review!

I always found it surprising that they made toys and cartoons from such R-Rated adult films such as Robocop, Rambo and Aliens!

The figures of the Aliens themselves were interesting designs...basically they went with the concept, sort of implied by the "Dog alien" from Alien 3, that the Aliens would reflect the DNA of the host bodies-so there were aliens based on Gorillas, bulls, rhinos, even insects.The marines though were just plain weird and not at all movie-accurate. Especially odd were the Apone and Drake figures since they clearly died early in the movie, and the Bishop figure seemed kind of like a Robocop reject.

I remember that at some point an animated series was considered to showcase the toys, ala the Rambo and Robocop cartoons mentioned above. However, like with the proposed Jurassic Park cartoon, it never made it past the planning stage.

I just wanna say I saw Alien and Aliens as a kid, probably under the age of 10. I know I got really into UFOs and aliens in the 2nd or 3rd grade, and rented anything from the video store that related to them, which included these weird, creepy movies called Alien and it's sequel.

I had the toys for this reason.

I'm now in my 20s and just bought them on Ebay for my girlfriend for Christmas. I came here looking for an explanation of why Ripley looked like Winona Ryder and her quote cited her AS a marine, AND has her saying a line she never said in the films, and makes her look like a badass. Also, blue pants, red shirt, and a sash? So, thanks for explanation!