My name is Space Runaway and I don’t really care about Transformers.

Sure, I liked the ones that I grew up playing with well enough, but I never really had any particular connection to the franchise as a whole. If I had to quantify my feelings towards the greater Transformers universe, it would probably be “extremely indifferent”. Most likely it was because of this that reacquiring another one of the toys from my childhood that ended up disappearing at some point was more difficult that it needed to be. Not too hard, since I was fairly sure it was a Transformer, but still confusing, especially when I came across Dreadwind and thought “That’s almost right…but something’s wrong”. At any rate, this particular search comes to an end with Masterforce Buster, the Japanese version of Dreadwind.

The box looks very Transformery. Note those awesome jointed knees on the illustration. Both the box and the toy say 1987, but this didn’t come out until ’88.[ 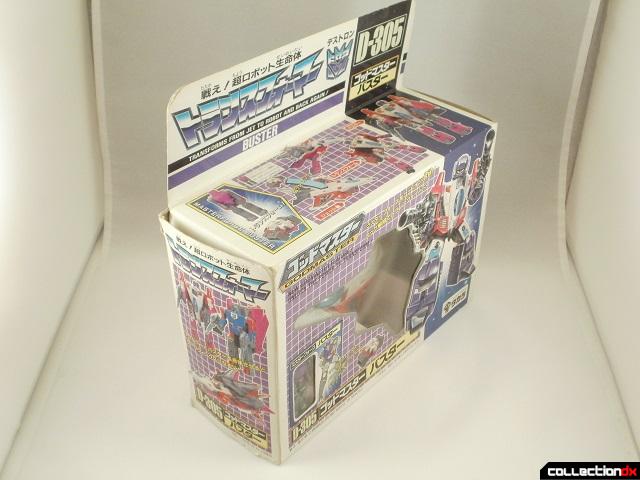 Something pretty crazy is happening on the back of the box. 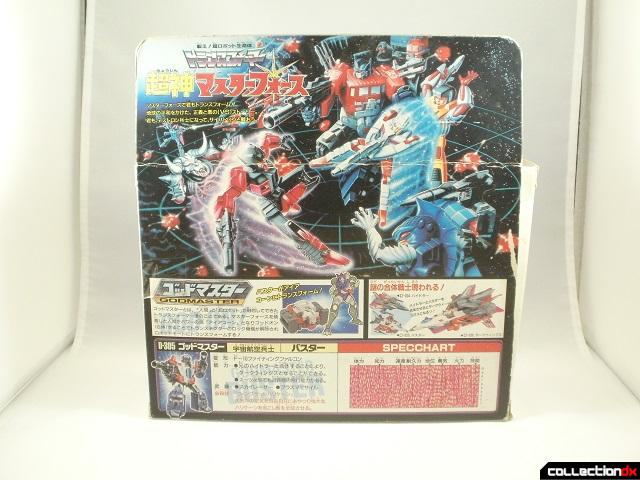 I don’t know how Robot Points adjust for inflation, but they’re probably worth more now. 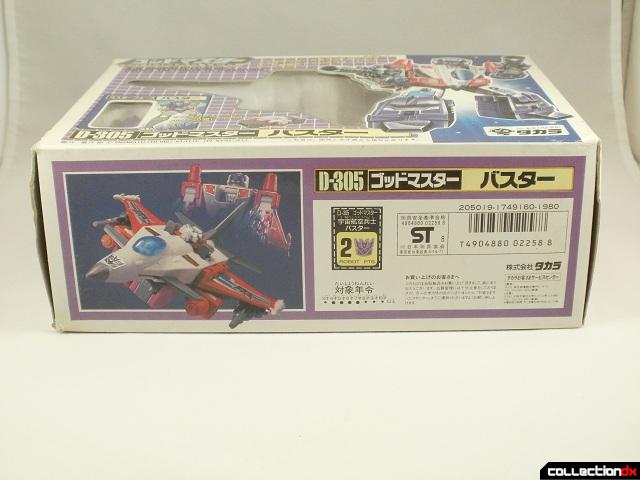 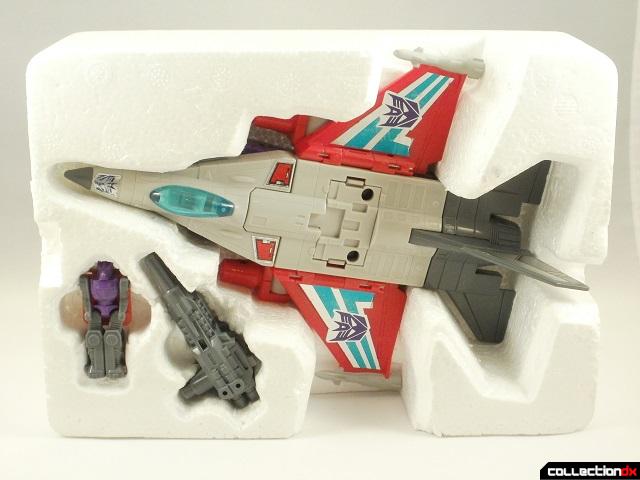 Everything comes tightly packed in styrofoam, as they should. 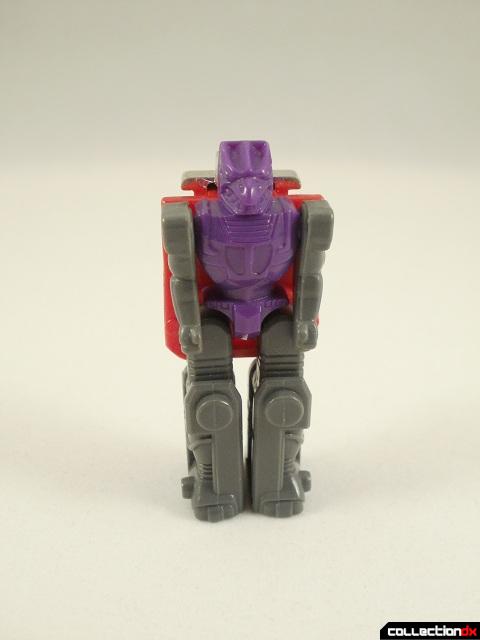 Buster is a Godmaster, so like the Japanese Headmasters Buster is actually the little guy, while the jet is more of a powered suit. It’s the same figure as the U.S. Hi-Test, but slightly recolored. Oh, and there’s chrome too. 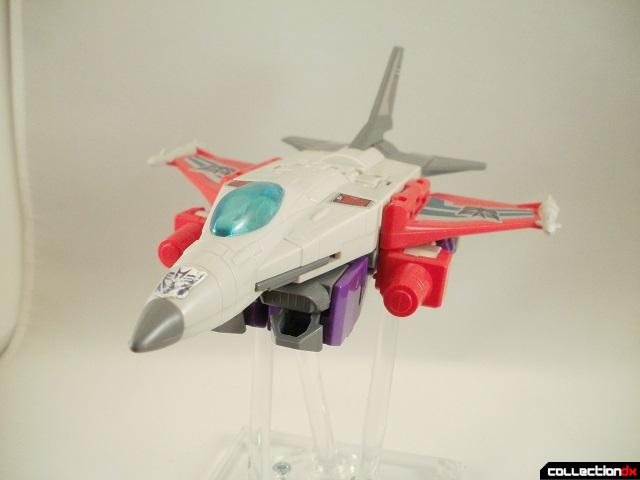 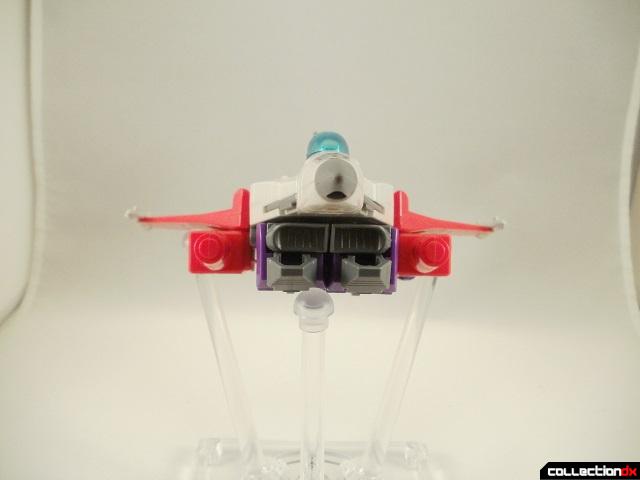 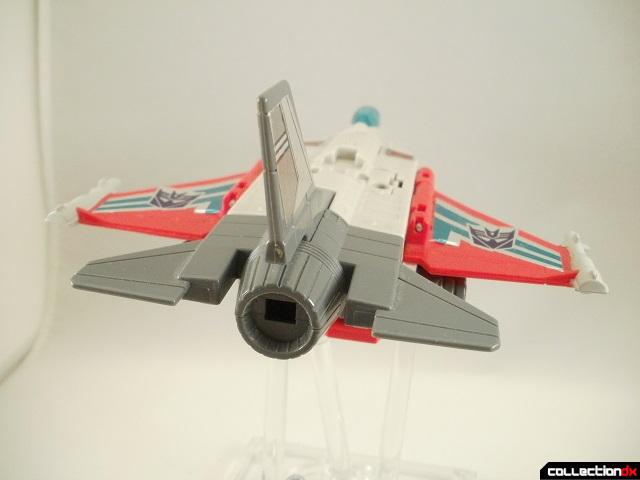 The unnamed jet is a General Dynamics F-16 Fighting Falcon. It looks like a good-enough effort to my uneducated eyes. The feet make a valiant attempt at replicating the F-16’s large intake, and the shoulders go about where the drop tanks should be. Accurate or not, I am quite fond of this jet mode. 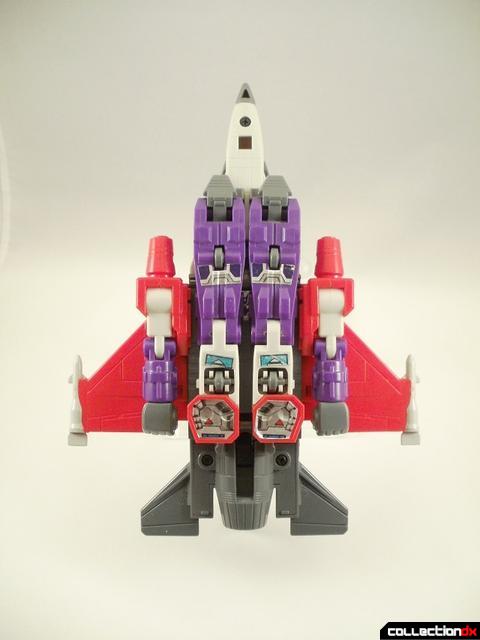 Wait, I don’t think this is how a plane is supposed to go.

Buster’s transformation consists of folding up his feet and lying down on his face. 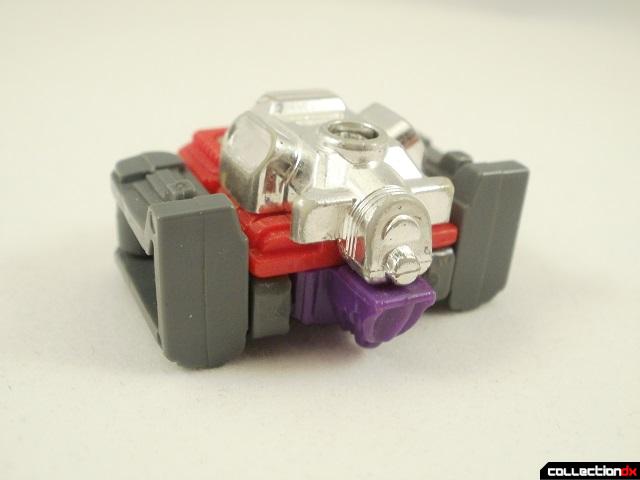 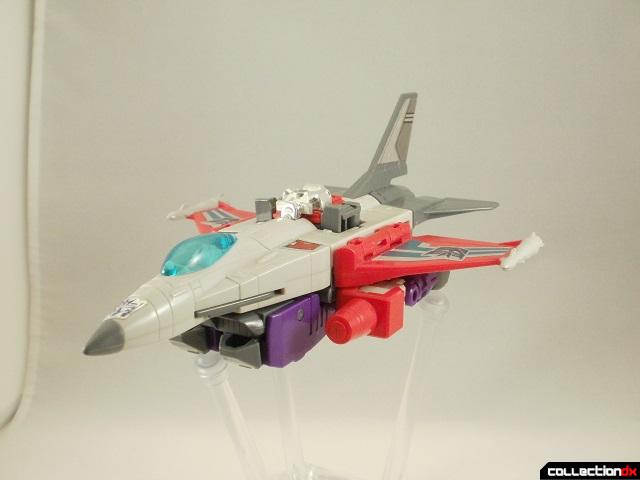 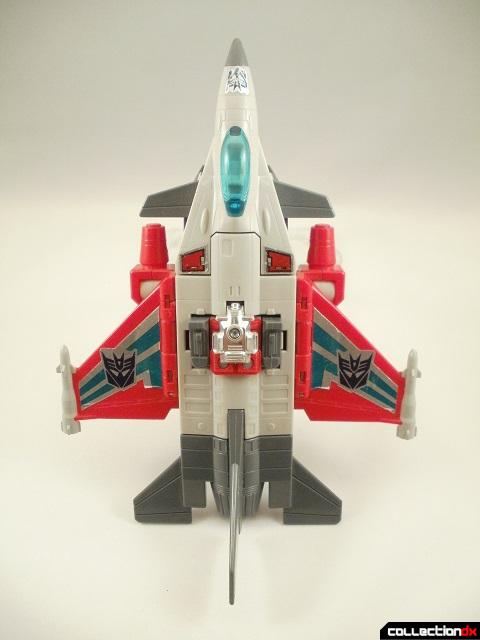 (Also there are these fold out canards, but the real F-16 doesn’t have them, so this is their only appearance.) 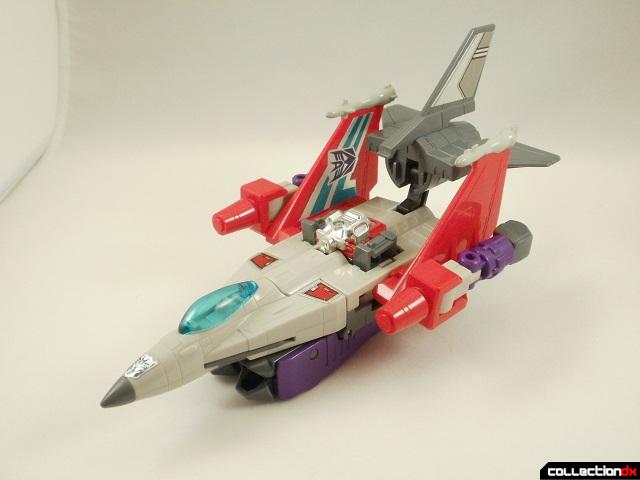 Once Buster is inserted into his jet (alternately, you could just use your finger) the wings unlock, allowing you to slide them back. Once the wings are out of the way, you just swing the feet around, fold down the nose, and slide the wings back up. It’s not a difficult transformation. 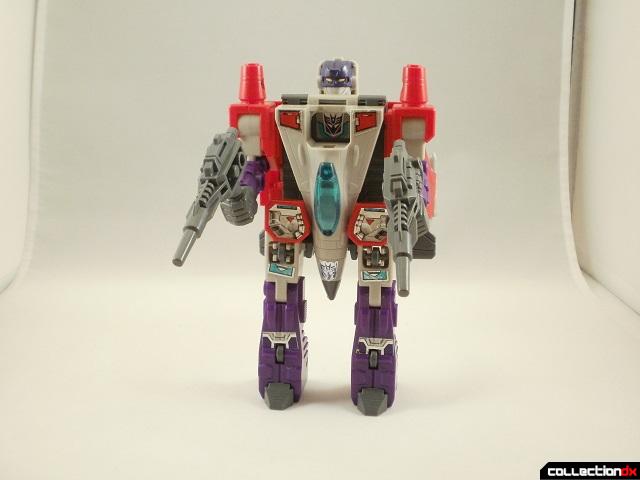 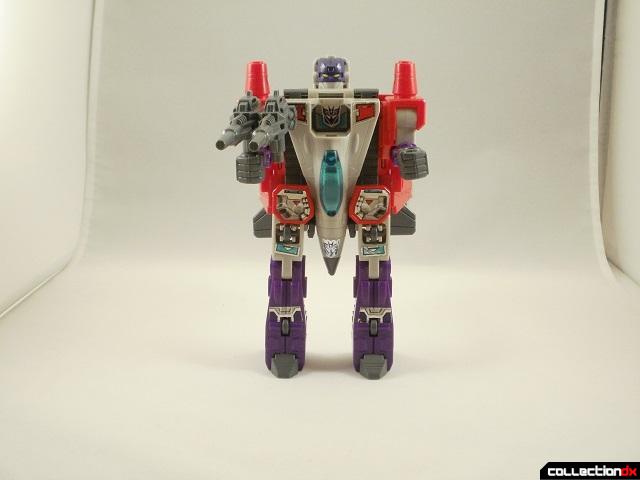 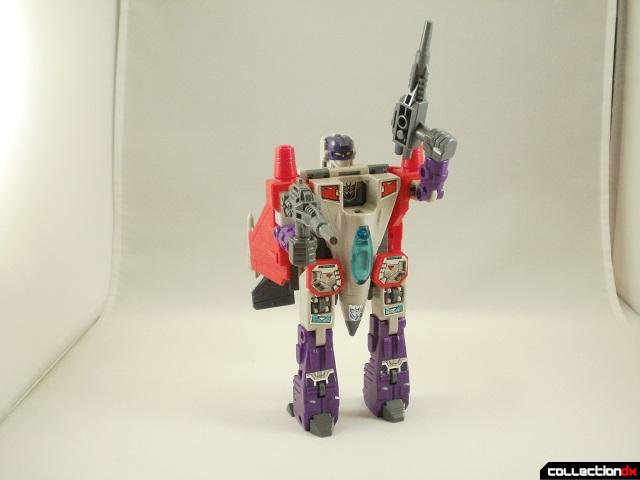 The transformed robot mode can dual wield his guns, combine them for a bigger gun or…that’s probably about it actually.

He has reversed knee joints for really no reason at all. It does allow him to sit down though. 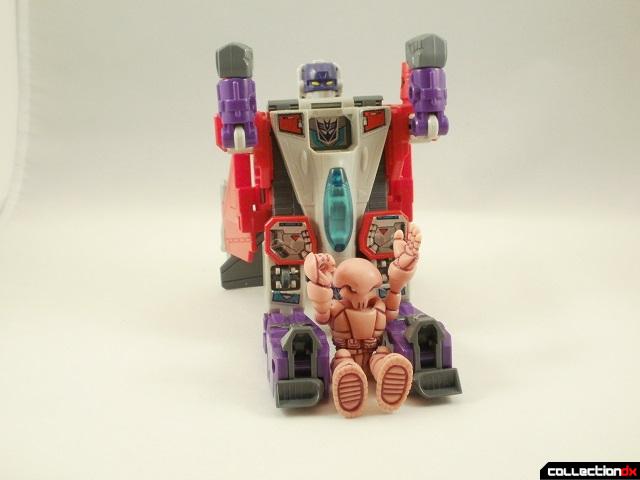 Or turn into a very sad gerwalk mode. 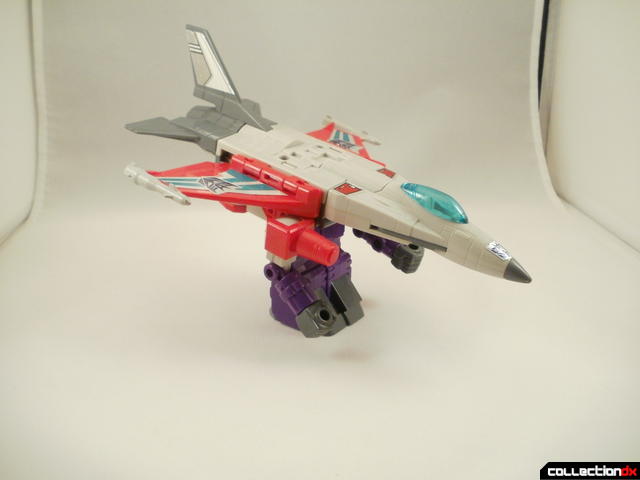 As Buster is Dreadwind with slightly different coloring, he can combine with Darkwing/Hydra to make a longer plane. I don’t have Darkwing or Hydra.

Buster has a lot of good memories associated with him, but aside from being sturdy he doesn’t have a whole lot going on, with most of the transformation hinging on the godmaster gimmick. At any rate, I like him enough that when it came time to find another one I wouldn’t settle for getting that other guy. I mean, teal?

I agree. Even if it looks...weird, Any Gerwalk is fine with me^^

It was the red/white combination that I remembered being so striking, and the teal/white just wasn't the same to me.
Actually, I didn't even remember that there were other colors on the body until I started trying to look for it.