Going to Pony Toy Go Round about once every other month back in the 1980’s was one of the best experiences of my life. My dad would load me up in his truck and we would take the 45-minute drive from Montclair to the Little Tokyo district in Downtown LA to a shop in Honda Plaza called Pony Toy Go Round. Pony Toy was a Japanese owned toy and gift shop that had three shops in the area, with one shop being exclusively devoted to anime, kaiju and tokusatsu toys, figures and model kits. 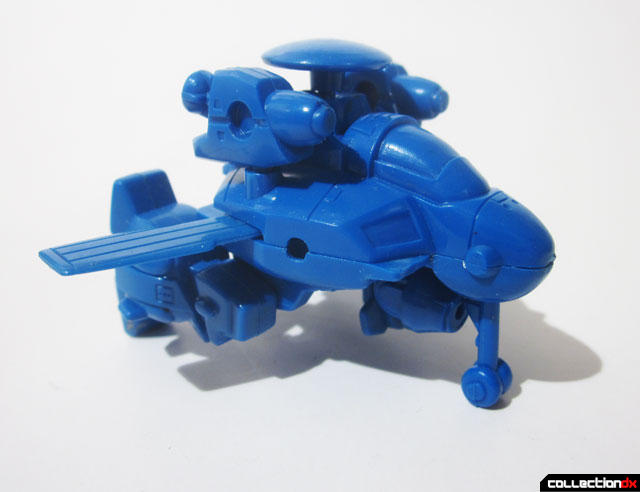 Pony Toy was a special place, as it separated those who were just sort of into anime and those who wanted to dive deeper into those mysterious and exotic Japanese toys than what was being offered at the local swap meets and domestic toy stores. A bulk of my toy collection that I have reviewed here on CDX was purchased from Pony Toy, especially my Bandai Spiral Zone figures, which could not be purchased anywhere else in Southern California. 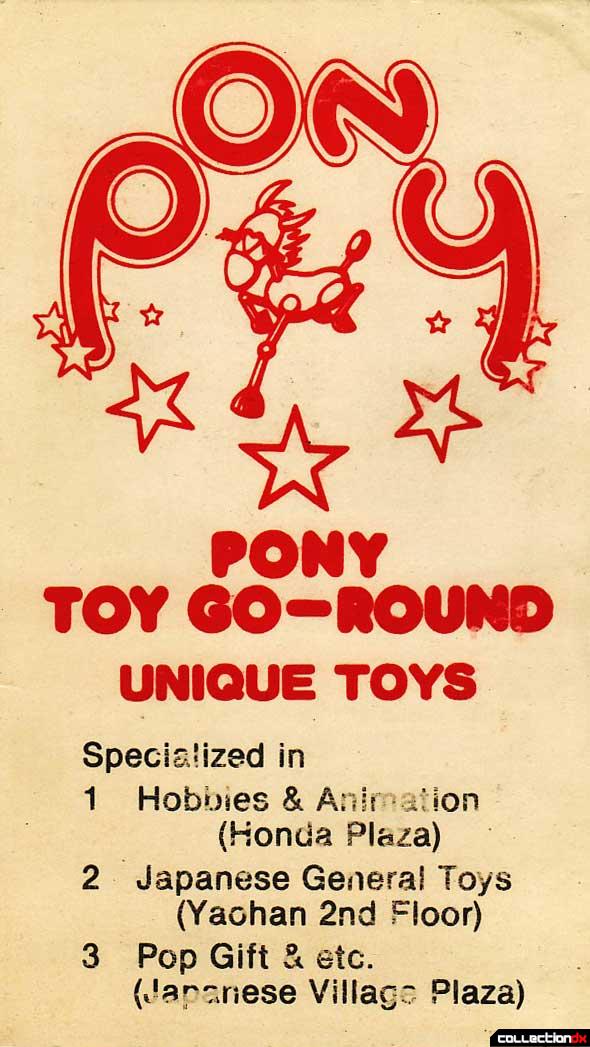 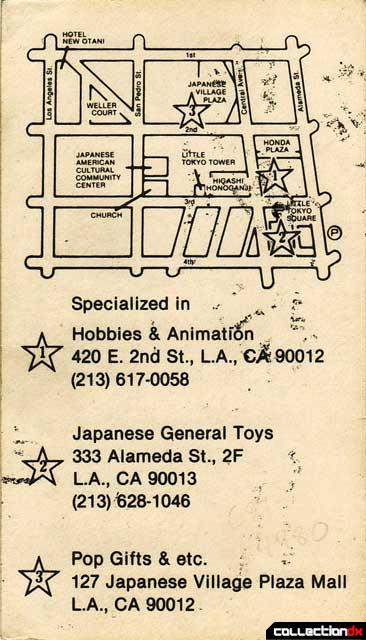 With most of my vintage larger toys have already been reviewed here on CDX I believe it is now time to review some of my smaller toys that I purchased in the 1980’s that normally do not get the attention that larger and more expensive pieces might get but were just as enjoyable as any Popy piece I might have owned over the years. 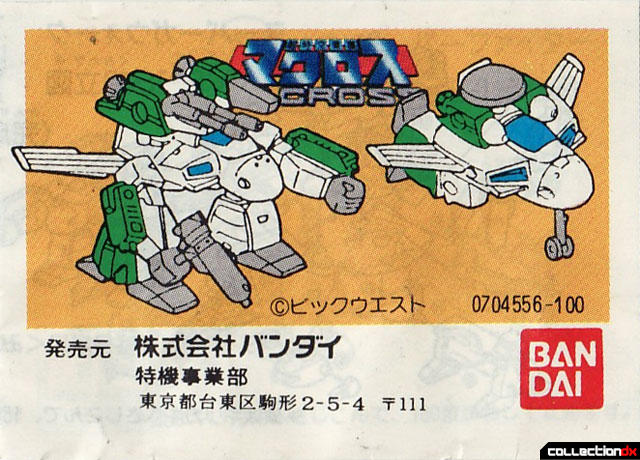 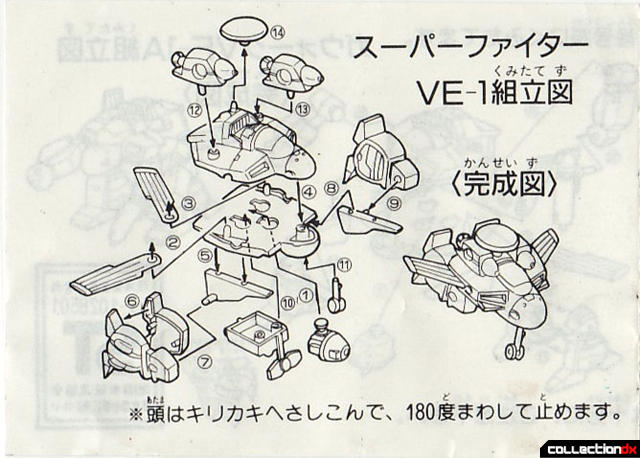 One type of item that I picked up in large numbers at Pony toy were the series of gashapon capsule toys known as Nice Present Giveaway. These capsule toys sold for $1.00 here in the USA and ¥100 in Japan making an inexpensive toy for young kids to pick up and collect. Nice Present Giveaway covered many genres and eras, from a Godzilla kaiju series, to Go Nagai and Mazinger classic robots series, to Gundam and other real robot series. 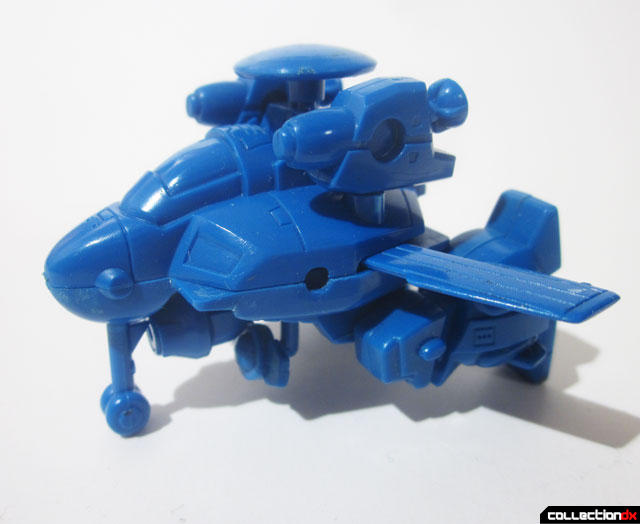 The quality and sculpt of these capsule toys were excellent for there price range and nicely captured the spirit of the subject even though it was only a SD representation. One complete series of Nice Present Giveaway that I was able to complete and still own after 25 years is the Macross series that was released roughly in 1984. 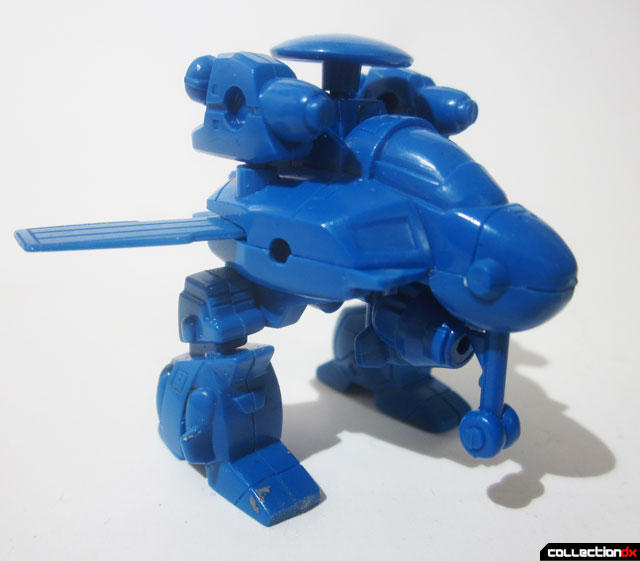 Four Valkyries were represented in this series of capsule toys: VF1S Fighter, VF-1S Strike Valkyrie, VE-1 Super Fighter, and VF-1A Gerwalk. These came in a gashapon capsule complete with the parts of the figure, a small fold out instruction sheet and were molded in either red or deep blue plastic. What was great about these figures was that they were component, meaning that you can mix and match all the parts to make a custom Valkyrie of your choice. Many variations were possible and we had fun taking them apart and building our own custom Valkyrie. 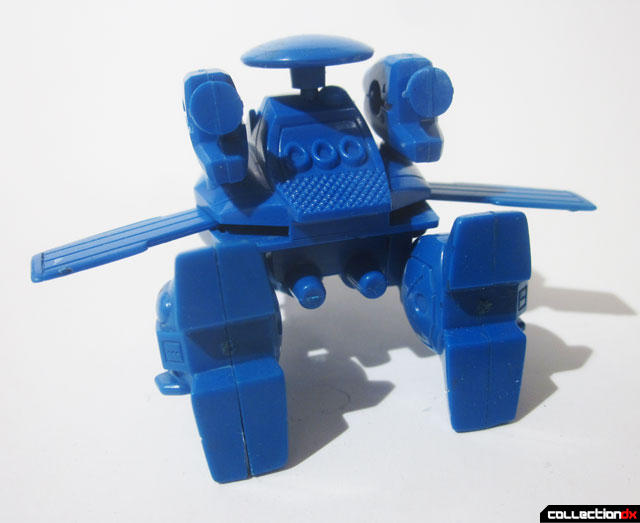 As the stated before, the sculpture of these were well done and captured the tiny nuances of the subject. Take a look at this VE-1 Super Fighter, the small details are well captured, including the correct leg armor, booster pack, radar array, radar dish and rounded head. Of these details alone, the VE-1 is my favorite of the four, considering it is one of the more obscure Valkyries in the series. 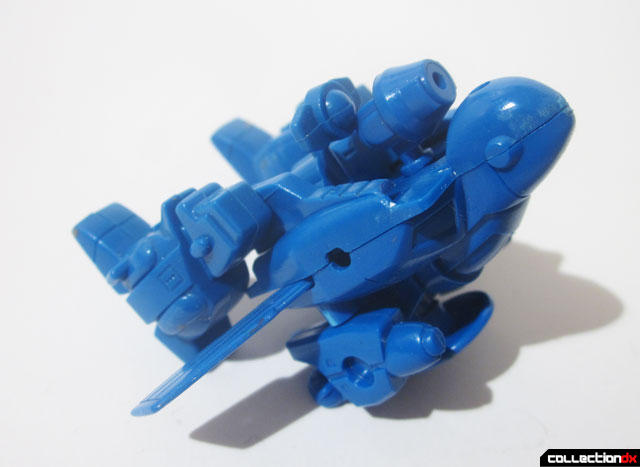 The deep blue and red color look nice and appropriate for the figure, no odd day glow child colors here. Kids such as myself at the time tended to want to paint these in their own custom colors as well, with my figures being painted for many years until I stripped the paint off my figures and restored them for this review.

About the only issues these Macross Valkyrie figures had were how easy the tiny pins that connect the legs bracket to underneath the body have a tendency to break if they are constantly being misused or taken apart. Three of the four figures I own had to have those parts glued together to the body as the pins are weak with time or had broken off into the hole.

I am personally shocked that I actually still own a complete set of all four, especially considering how many parts are involved, the way I (didn’t) store them, and the many times I have moved over the years. But it is these small pieces such as this VE-1 that reminds me of the 1980’s and my early love and excitement for anime and Macross.

©2011 article and pictures by Leonardo Flores

I would LOVE to get these again, I may even still have a couple stashed away somewhere, but damned if I can find them. And there's virtually NO evidence that these ever existed on the interenets....sad.

And Pony Toy - god I LOVED that store - I only got to go there a couple times as I lived in San Diego at the time it was open, but I still have my Saint Seiya Poseiden figure that I bought there - still has the price tag! Sadly they've been gone for a log time and the stores that have replaced them (Jungle Anime) just aren't quite as good.

Thanks for the reply! I was on vacation and had no computer around me to answer you.

These toys were great and some of my favorite Macross items at the time and I am glad I'm finally getting around to review them here on CDX. I have all four and plan to another one this week.

And about Pony Toy. Glad you were able to visit the store back in the day, it was a unique store and I was glad I was able to visit it back in the 1980's those are some of the best memories ever. I plan to do to a article on Pony Toy but I need to get with Daisuke and interview him about the details as he worked for Horizon Models which was part of Pony Toy.

What a cute li'l guy. If you ever come across extras, you should paint one or two up...

I had painted them back in the 1980's spent the week before this review taking off all the paint. They look great painted but I wanted them back to their original state.

I wish Bandai would reissue these again!