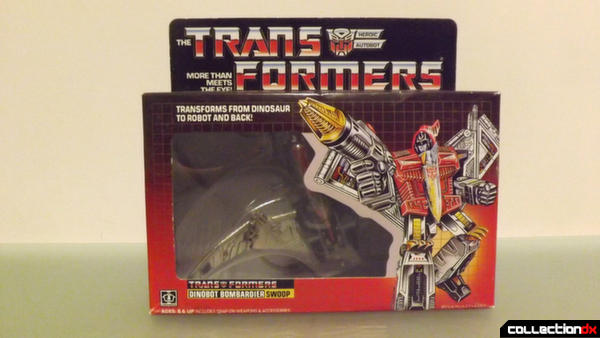 G1 Swoop, the toy i always wanted as a kid but it was never released in the UK.

Made even worse when a Transformers video was released here with the two part episodes "Desertion of the Dinobots" which featured Swoop as a major character. I bought mine on ebay a few years ago, mint in box for £80, a steal. 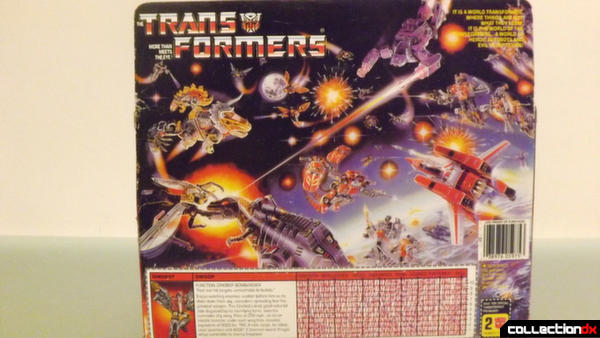 The box is pure G1, with a 4 step transformation guide on the top of the box and art on the back with the Tech-Specs.

As can be seen on the rear box art, the artist did like to re-use the same characters i count 4 Grimlocks'.
At the bottom of the art are the Tech-Specs that can be decoded with the clear plastic strip, showing what abilities Swoop has. 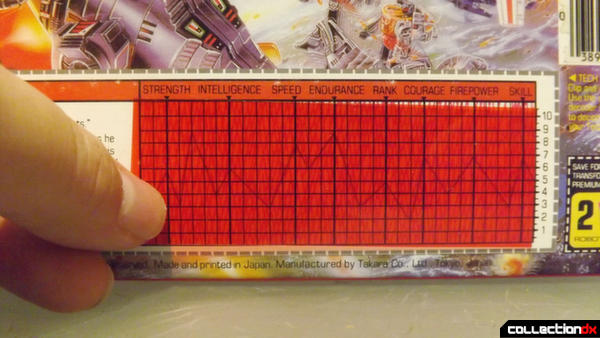 Inside the box is the figure, the Transforming instructions, sticker sheet, two missile launchers, three missiles, Tech-Spec decoder and sword (which i seemed to have misplaced since moving). 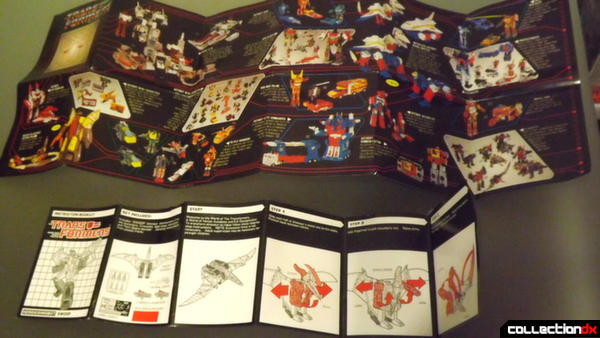 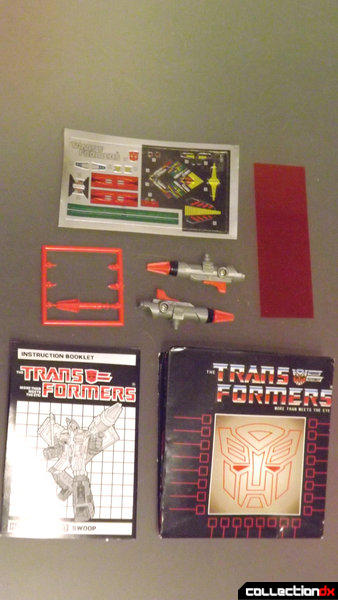 Swoop was originally a Diaclone figure part of the Dinosaur Robo line and is the only Dinobot not to feature a cockpit for the driver.

When the figure was brought into the Transformers line they re-coloured him red, but the animators kept the blue Diaclone colours for the show.

The beak was rounded off at the tip for safety reasons (which i still contend that they`ll round off points or cut down Optimus Prime`s smoke stacks but continue to have firing pointy missiles that often fire off on their own in random directions, like eyes) 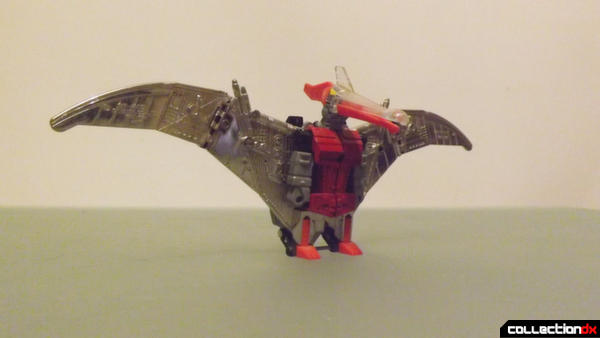 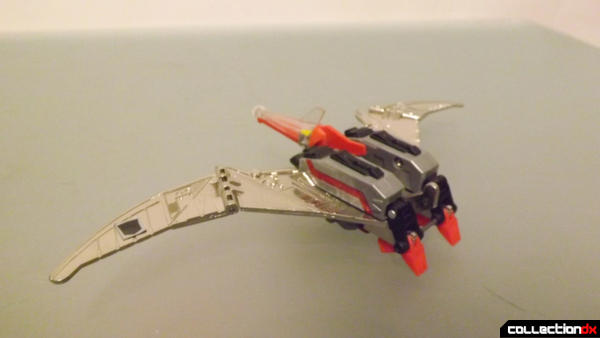 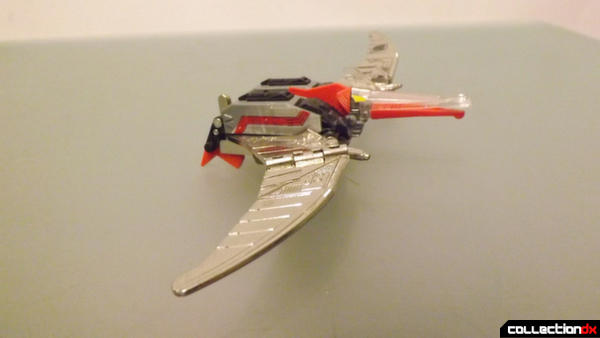 The body of the figure is Die-cast with the rest being plastic.

In Dinosaur mode the figure can stand upright on the feet, it also has molded "wheels" when you flip the feet up, these are non-functioning and are supposed to work with a flip out functioning wheel in the chest allowing the figure to roll but you cant roll fixed plastic wheels. The beak is clear plastic (as was used in all the Dinobots). 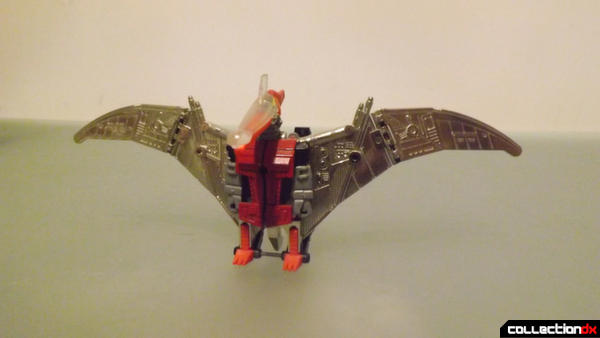 Transformation is really simple, flip out the legs from the back of the Dinosaur mode and then slide them up on pins then flip out the feet.

Pull the two halves of the chest out and then pull each arm out from either side of the chest, slide down the forearms on pins.

Flip the beak down into the cavity in the chest which will also reveal the head, finally flip the wing tips back.
My figure has a habit of leaning forward at the knees, i'm not sure if this was the same for all Swoop figures. 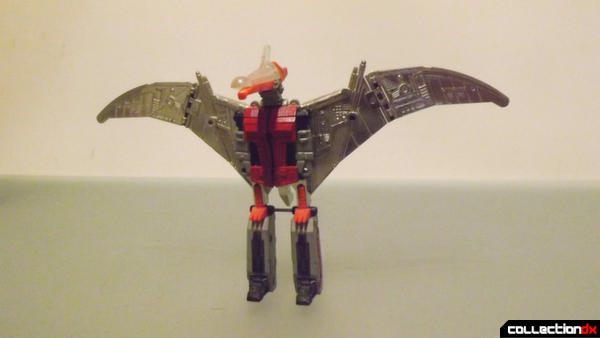 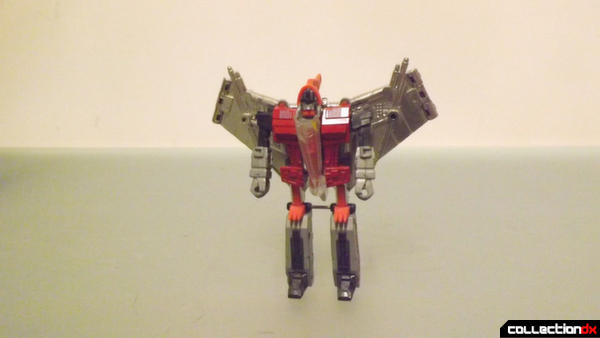 I still love this figure, but these imperfections are anoying considering the price this figure often goes for. 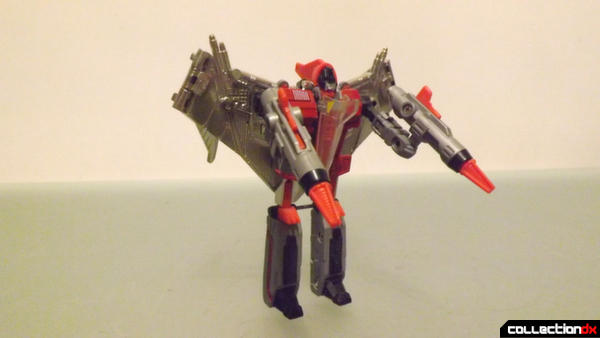 Swoop has an impressive wingspan of just under 9 inches, the figure itself is around 5 inches tall.
The face is really small and kinda looks like the animated model, if you squint and you`ve had half a bottle of vodka. 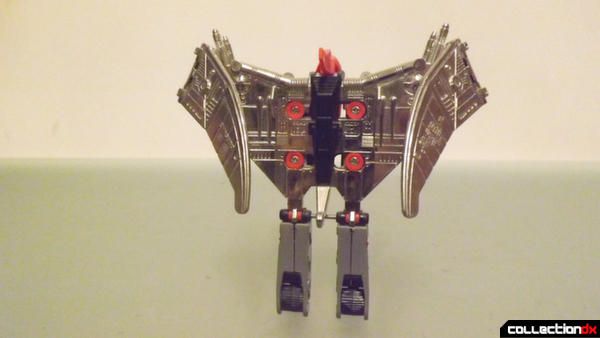 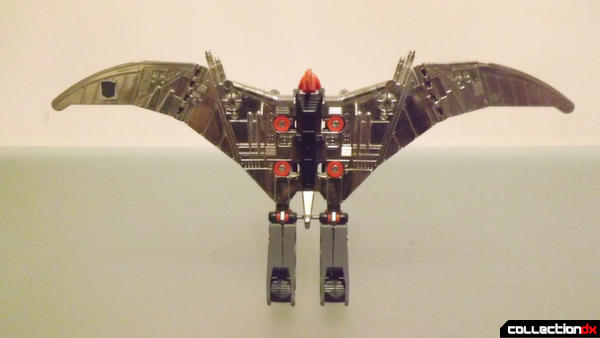 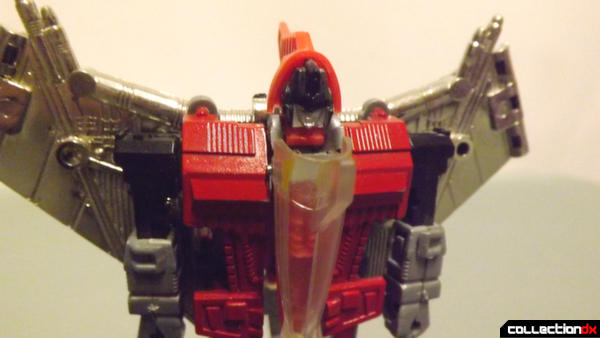 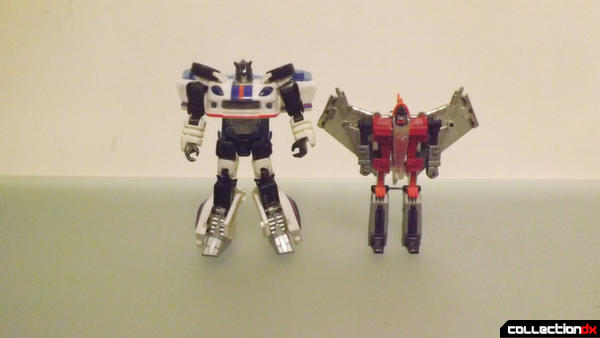 For all its flaws Swoop is still one of my favorite Transformer toys ever, this is most likely more to do with not having it as a kid and wanting it more than anything.

He`s hard to find in good condition and complete and even harder to find mint in box. I'm sure i`ve broken the hearts of many a Transformers collector in opening the sealed box, especially UK fans. I have a nice warm fuzzy feeling in my belly at the thought of that. 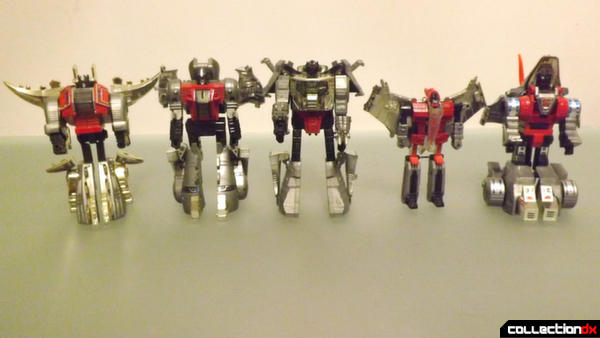 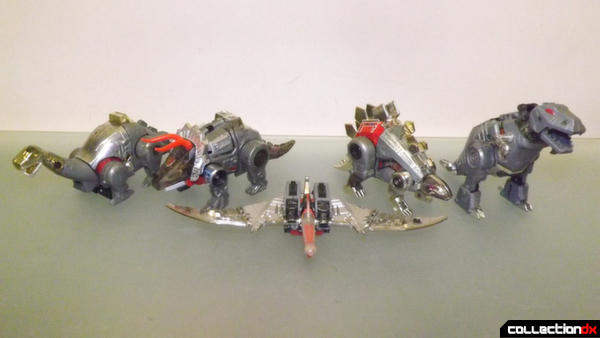 ...it always used to puzzle me as a kid growing up reading the comic why I could never see these characters in the shops (apart from an early encounter with a bootleg Shockwave... ). It was literally years before I discovered the reason why... and don't even get me started on bloody Jetfire! :-)

The Transformers toy I've always wanted, though, is related to Swoop in a way: Centurion, last seen fused to Megatron whilst being dredged out of the river Thames by Richard Branson...

Yeah I wish Swoop wasn't so damn fragile so I could have him...

Also if you think four grimy's on the murual is weird, wait till ya' read the childrens book Jaws of Terror, where the Crusher device (among the many machines Megatron has a sexual orientation for) after causing global destruction (yes the kids stuff see and read books are violent but that is common knowledge) A ENTIRE ARMY OF HUNDREDS OF DINOBOTS fly out of a tar pit in a antarctic cave destroyed the crusher

What I love about the Dinobots was the "x-ray" design where there was gold chrome with clear plastic over it (like Grimlock's neck for example).

You're more than free to derive such unmitigated glee from opening sealed G1 boxes, but you should know that the boxed Swoop you bought is a knock-off. Or, to be more precise, a high-end Zhong Jin counterfeit. Study the following link for confirmation and proof :

The obvious giveaways, from a cursory look at your photos, is the extra-wide grid column and too-thick gray border on the box. On the toy, it's the rub sign on the left wing (instead of the right) that serves as the last (or first ?) nail in the coffin.

And though it's hard to tell from the photos, I'd wager "Heroic Dinobot" is one word on the instruction booklet, with no gap between "Heroic" and "Dinobot".

Finally, even for a high-end KO, you overpaid quite a bit, as they usually sell for £30. Even the "special edition" knock-off Swoop in diaclone colors (blue chest, gold chrome) only sells for about £50.

Well, they dealt with the missiles by putting low-tension springs in the launchers so that they couldn't fire with any real force. But that doesn't stop things with pointy nosecones from being flown around at breakneck speed or thrown like darts by energetic children. Or Optimus' stacks from stabbing someone in the foot if they step on him.

Now, Swoop's missiles and jaw weren't made PVC for safety reasons. They just had the bad luck to share a sprue with the Dinobots' swords (which had to be either butterknifed like Blitzwing's or cast in soft plastic).