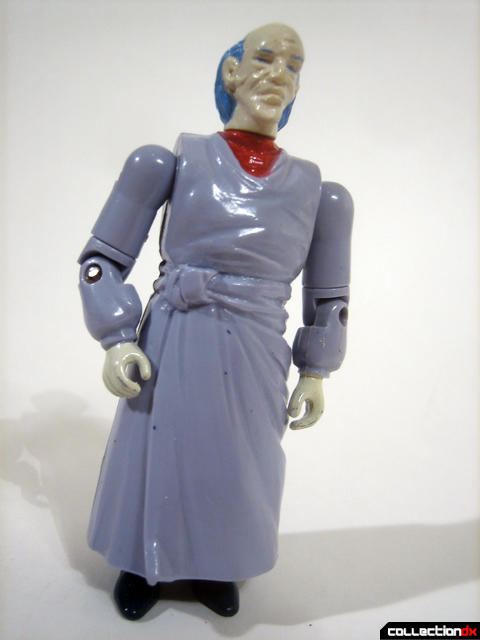 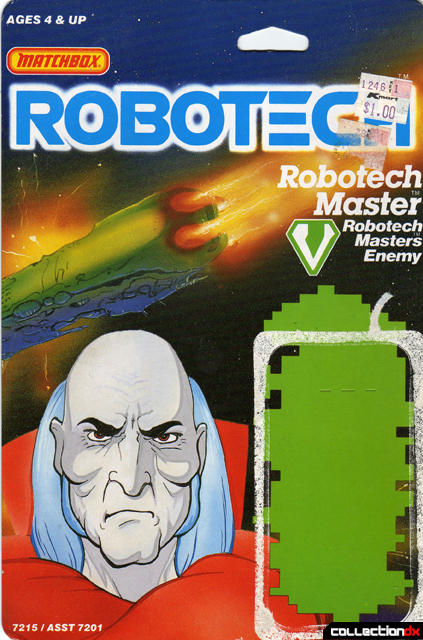 Although more Southern Cross items were needed for the market, Matchbox’s representation of The Robotech Masters, known as Dess, Deri and Demi in the original series, is one of the all-time worse representations of a character ever injected into plastic and sold to kids and one of the most legendary peg warmer ever. In fact, I am sure if you went into a Kaybee Toy & Hobby or Playco Toys store today you can most likely still find these figures marked down from $2.95 to 10 for 1 cent. 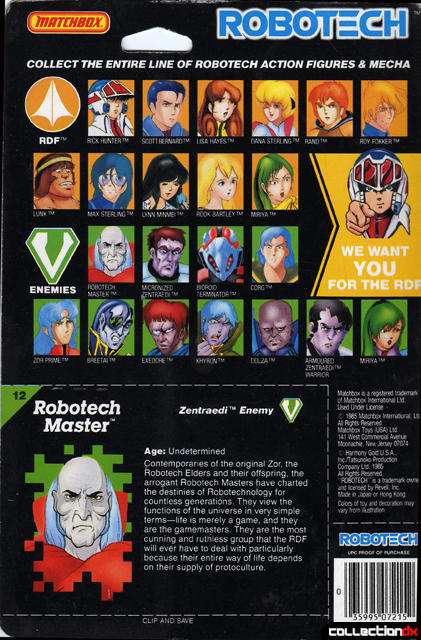 First off The Robotech Masters as a figure is not much to work from to begin with, as the character comes down to just being an old man in a robe. But there are details about the character that could have made an impressive figure, most notably the Elizabethan robe itself which could have been a dynamic sculpt and I am sure today somebody like Revoltech could make a very reasonable impressive figure. 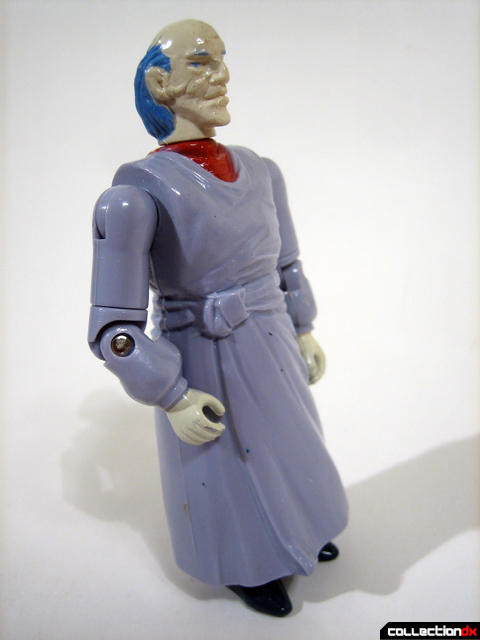 Unfortunately, this was 1986 and the Matchbox that manufactured these figures were nowhere near their former glory of the 1960’s and were simply a grind-house manufacturing poor toys under the Matchbox brand name. 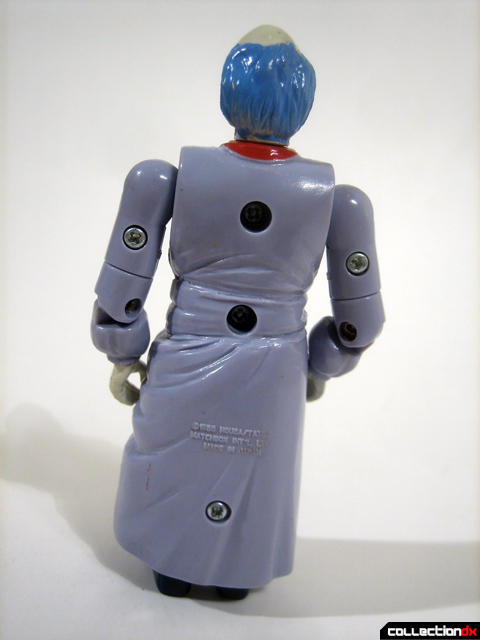 The Robotech Master figure that came out in 1986 was less Southern Cross and more David Lynch’s The Elephant Man. I am sure if you airbrushed the robe black it was pass as The Elephant Man and would actually be a better figure! 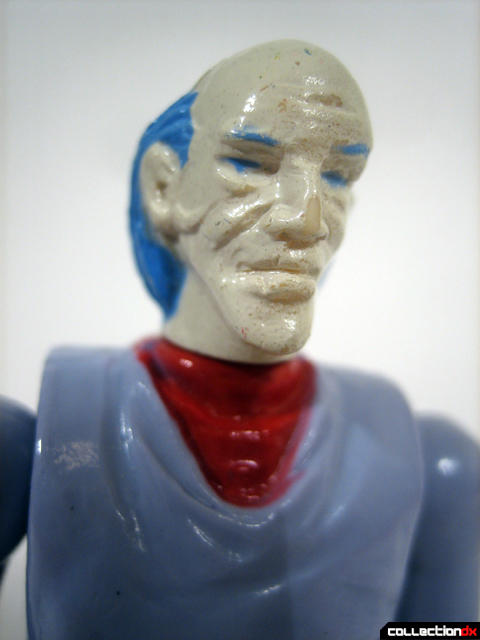 My biggest complaint for all the Robotech Defense Force figures is the ill proportions of the figures themselves and Dess is perhaps the worst example of all the figures. The way it is proportioned it looks like the figure is smaller than the rest of the line but when compared to the other figures it actually scaled with them. The way it is proportioned, it appears to be a midget and nowhere represents the regal appearance as shown in Southern Cross.

Today it is still the most easily obtainable Matchbox Robotech Defense Force figure, as it could still be picked up sealed on the card for under $10.00 dollars on eBay. In Matchbox logic I suggest that the marketing team at Matchbox watched the Robotech Masters portion of Robotech and said. “ There are three of them so we should produce three times as many figures as the others!” And in 2010 they are still trying to unload the overstock of Dess on us.

14 comments posted
If I didn't know who this

If I didn't know who this guy was (and I don't,since I don't think I've ever watched the later,non Macross parts of Robotech) and just saw the figure,I would honestly think he was like a scarred Freddy Kruger type guy. Are all the figures like this? I like Macross/Robotech,but I'm a pretty casual fan.

Yes, all the figures has proportion sculpting issues although the Zentran and Bioroid Terminator figures are quite cool and good army builders. This figure on the other hand is one of the worst ever made!

What a horror! Does it actually have that much lean, or is that a trick of the photography?

LOL!!! Its a bad figure but that's just the camera angle.

It's sad that the opportunity that Matchbox had with making quality figures based on such a rare anime (Southern Cross) was so epically wasted on such a poor sculpt.
I really wish that a modern line such as revoltech would make some Southern Cross figures. They would be awesome. I had a few of the models back in the day (the armored figures of the Southern Cross). Just wish I still had them today :(

The Spice must flow.

there are no Macross / Robotech Action Figures, then look no further than this figure. The Master and Dana Sterling figures were the stinkers of the 80's. The stigma that "Robotech = poor toy sales" starts here. It's a big reason why many retailers just don't order/care about Macross / Robotech.

Matchbox rushed this line into production to compete with Hasbro's Gi Joe line on the toy shelves, so all of these figures were made with a very poor quality plastic and paint. The thumbs are commonly found broken, the footpegs broken. Matchbox, geniuses of design, made the footholes about 2mm too small to properly fit stands for Kenner's Star Wars and Hasbro's GI Joe figures, so it is common to find stand pegs broken off into the feet of these figures. Not a problem with the Master, though, because no kid would have ever put this scumbag on a stand to begin with. Why waste a stand on a purple guy in a dress? As a kid my master figure died a flaming-firework death inside of a friend's at-at.

Also worth note is the bad paint, which will flake off the figure if exposed to air over time. Many of the c10 mint figures you see today were carded figures opened in the last 4-5 years.

Don't confuse these with the even worse Harmony Gold figures. Master wasn't made by HG but several of the other main characters. These have even worse paint and plastic.

"If you want to know why there are no Macross / Robotech Action Figures, then look no further than this figure."

Not of the characters themselves. Just the robots.

We got one full on action figure with the Ex-Gear Alto.

There usually aren't figures of the characters from mecha shows. I mean,sure candy toys or vinyl statues of the women,but a full action figure line ala Star Wars is pretty rare for a mecha anime.

The fact that you found them at retail in 1995 really says it all.

Another branch of the same chain of stores had carded Kenner Star Wars figures a year before, $1 a piece. Not like one or two hanging on the pegs, like cases. A section at the very back of the clearance section. There must have been at least 50 General Madines and his crappy ilk. Me and my friends would buy them to tie to firecrackers when I was a highschooler. I actually bought their last Rancor Keeper the day they were stocking the shelves with the 95 hasbro line.

They also had an entire isle dedicated to Toy Biz's Marvel X-men toys from the early-mid 90's, with figures being $1 (when these were brand new, hot, and Toys R Us and comic shops had them at $5-7+).

The store went under in 1997. That type of store (family-owned toy chain, not corporation-owned) is now completely gone, because we all fight to save $5 online, and wait for stuff to hit clearance at big box stores to save pennies. and the mom & pop shops, they'll never come back. :(

Well,in all fairness,I wait for clearance prices and comparison shop at the chain stores BECAUSE they're big,faceless chains.

As for online,I only ever order imports or things I can't otherwise buy at a brick and mortar. I'd much rather go to a store.

I AM NOT AN AMIMAL! I AM A ZENTRAEDI BEING!

Would make for good fodder for a dr. Wily custom with a little work.