In the waning years of Gobots, Bandai began to create more and more exclusive toys just for the foreign market. Much like the main Machine Robo line, these new Gobots had their fair share of brilliant designs and downright awful ones. The subject of today's review is a Gobot that seems to fall somewhere in between. 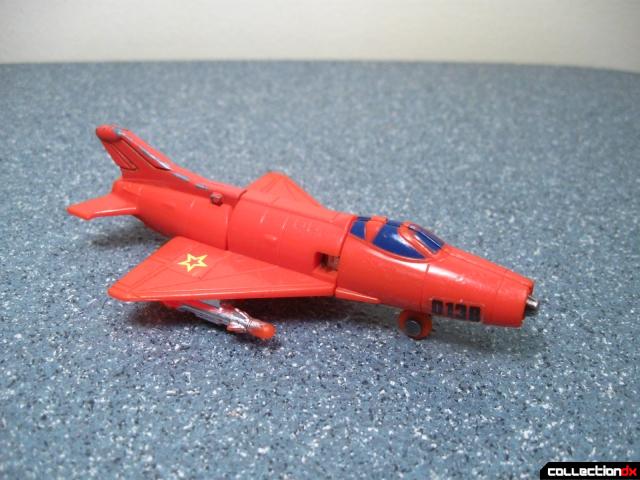 Gunnyr was one of the last Gobots to be released in the west. His alternate mode is a fairly convincing little MiG-21 jet fighter. He measures about 4 inches long in this form. Unlike a lot of the more elaborate Gobot jets, Gunnyr is rock solid in airplane mode. 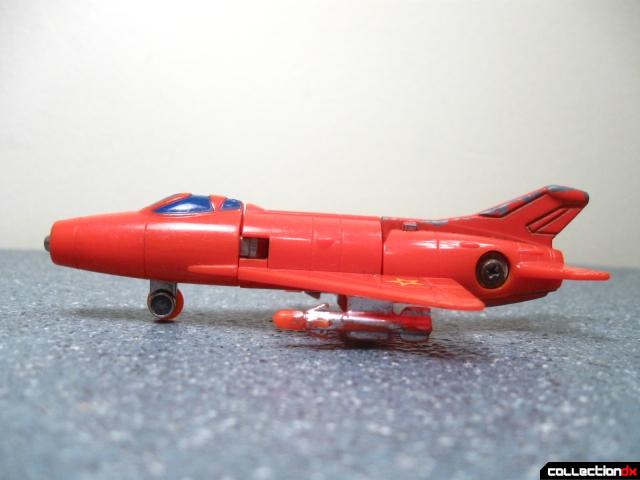 Underneath, Gunnyr has all the makings of a normal toy airplane like landing gear with real rolling wheels and a pair of chromed missiles under his wings. 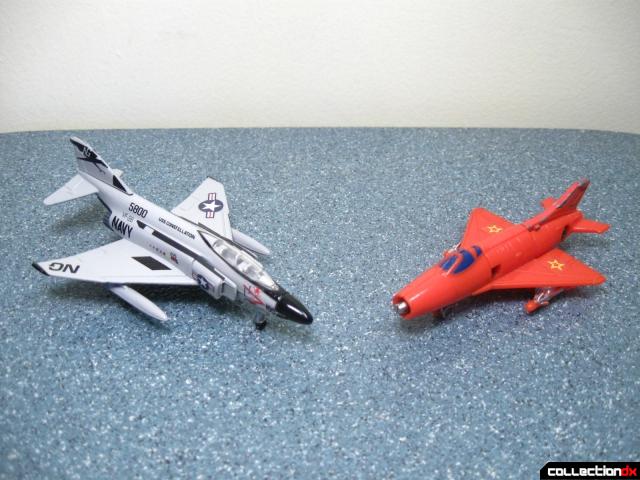 Gunnyr looks right at home next to any off the shelf diecast airplane. 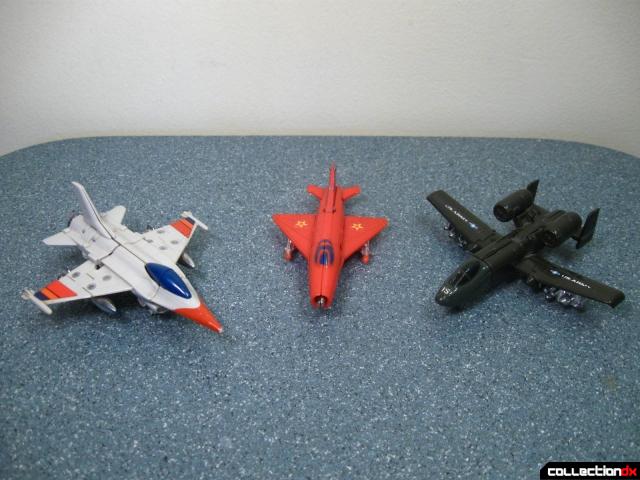 Next to other Gobot planes, he is nice an compact. Compared to either Heatseeker or Bad Boy in their loose fitting jet modes, Gunnyr is a tightly locked together tube of an airplane. 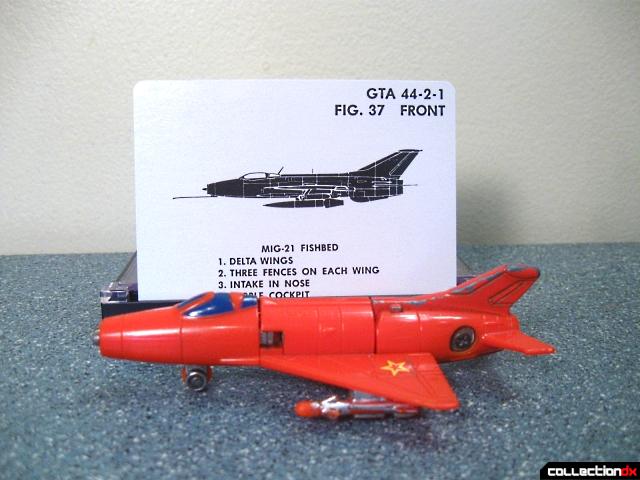 Other than a few seams and obvious joints, Gunnyr is a quite pleasingly authentic little MiG-21. Anyone who studied up with a set of Visual Aircraft Recognition cards (US Army circa 1977) would instantly peg it as a the Soviet Union's most ubiquitous fighter jet. 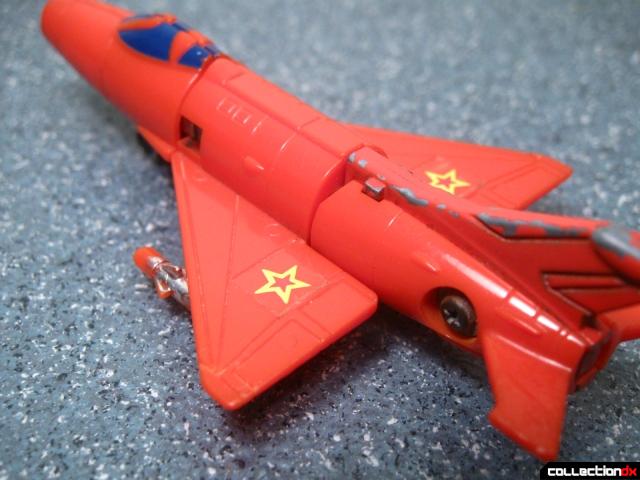 The roundels on Gunnyr's wings are meant to be like the implacable Russian star, but the yellow outline makes it look like a Chinese fighter. I must admit I have a soft spot for the airplane because it looks like the ultimate grunt machine with its very basic design and use in numerous shoot 'em ups as an easy 500 point enemy. In fact it is one of the most mass-produced warplanes and is still in service all around the world. 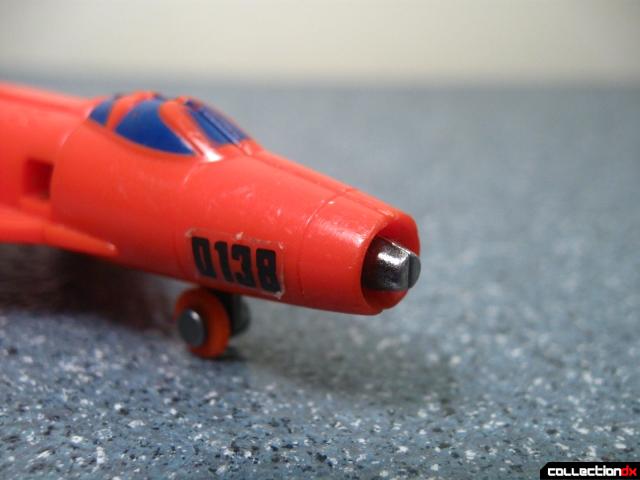 I lament that Gunnyr was never released as part of the Machine Robo line as I imagine in a nation with more lax toy safety laws, Bandai could have made the shock cone on the front come down to an authentic sharp point. All I could ever wish for is a transforming toy that is also a functional throwing dart. 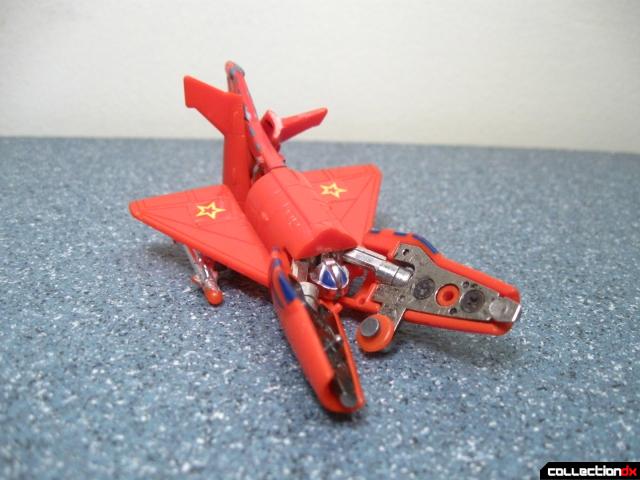 Much of Gunnyr's durability comes from his extremely simple transformation. Just split the front of the plane to form his arms and rotate the sides of the rear fuselage to create his "legs." 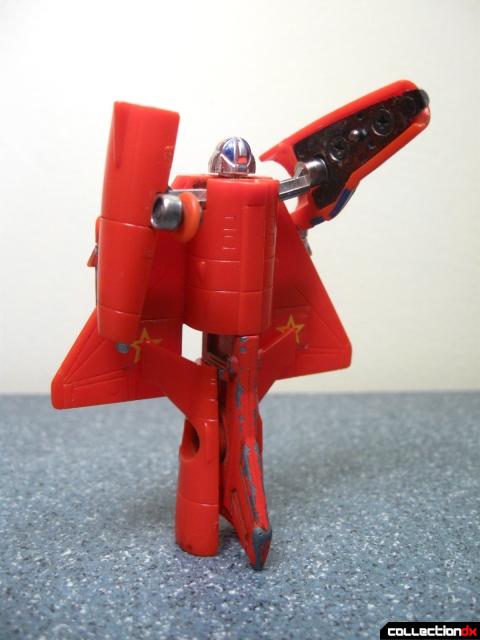 Gunnyr's robot mode is in a word: прелестный. Er... I mean charming. This barely reconfigured airplane does the absolute minimum to achieve humanoid form. Neither his arms nor his legs do anything to disguise the fact they are just chunks of airplane arranged differently. Only the reveal of his tiny chromed head marks Gunnyr's incredible change. In robot mode it is easy to see the diecast parts present in Gunnyr's construction with the interiors of his arms, the attached shoulder joints, and the strange tail fin based "third leg" being under the zinc curtain. His arms do not use the typical diecast ball-joints that tend to loosen over time. Instead he uses a pair of diecast universal joints that also get loose over time. 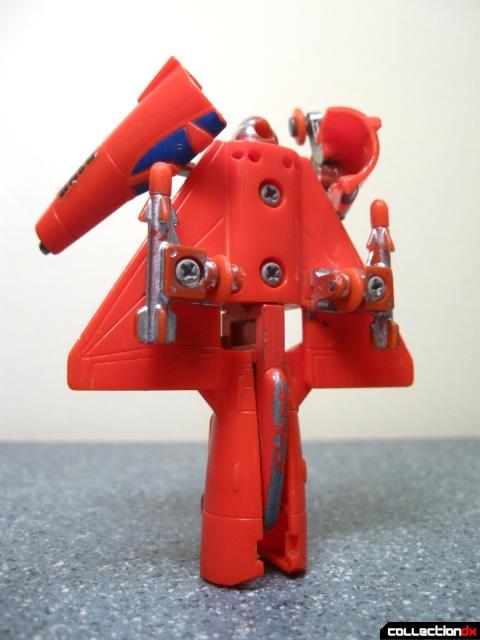 A back view is even less flattering to Gunnyr as it blatantly betrays him as just being the airplane standing up. 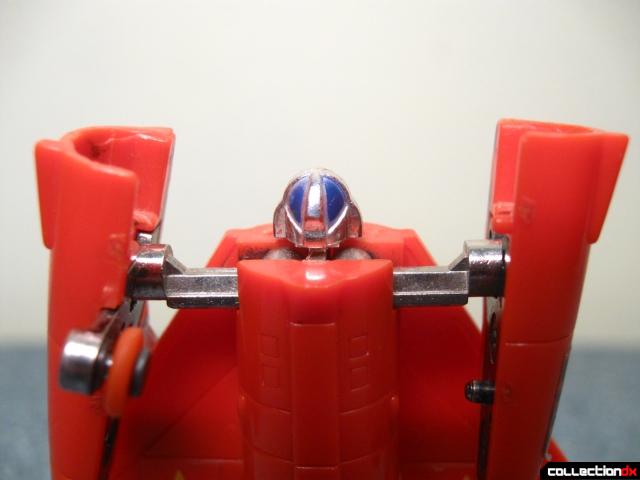 Even Gunnyr's head is somewhat simplistic even by Gobot standards. The smooth dome-like cranium combined with the huge blue eyes makes him appear to be a robotic Cosmonaut. 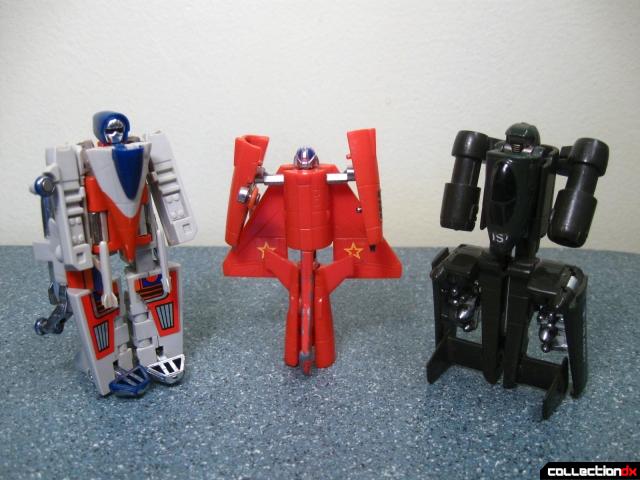 While Gunnyr is far less ambitious than most of his Gobot jet peers, there is something to be said about how solid he is in either mode. Unlike Heatseeker or Bad Boy, no loose joints will ever prevent him from standing tall and defending mother Russia. 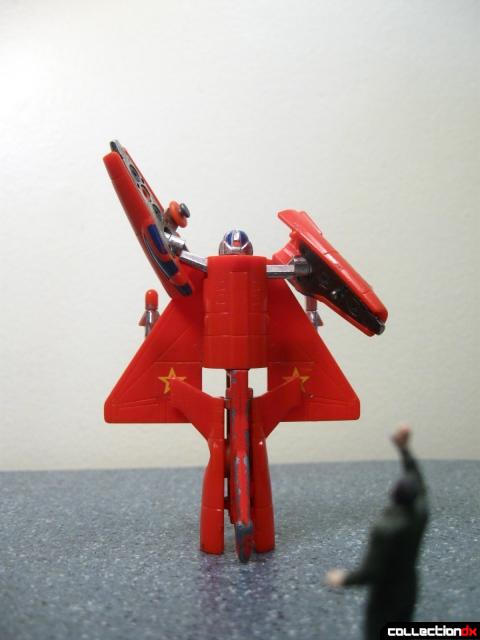 I find Gunnyr to be a curious case of a design that really should not work but somehow manages to be incredibly playable and also quite fitting for his assigned vehicle mode. In many ways Gunnyr looks like he could actually be a Soviet designed transforming robot. What he lacks in grace he makes up for in pragmatism. Even his lack of true legs make it look like he just hovers around towards filthy Americans like an unstoppable drone soldier.

But in a lot of ways Gunnyr is just adorable. 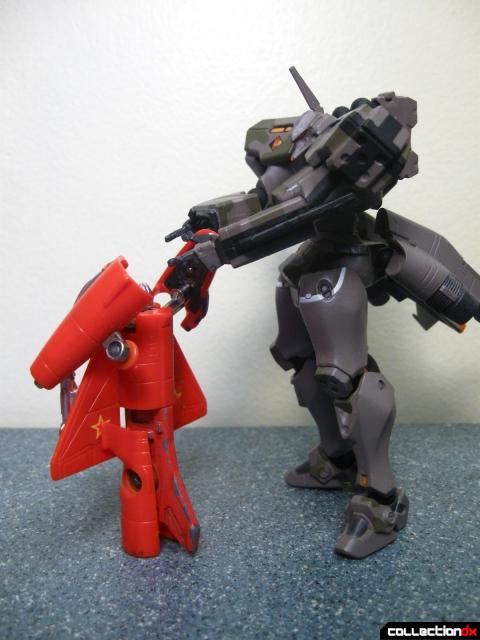 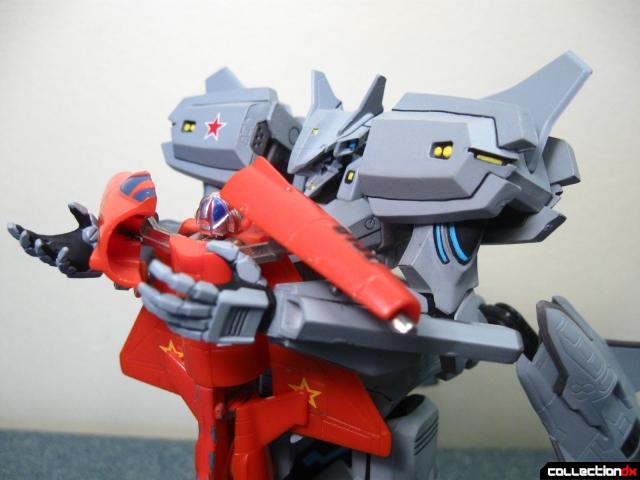 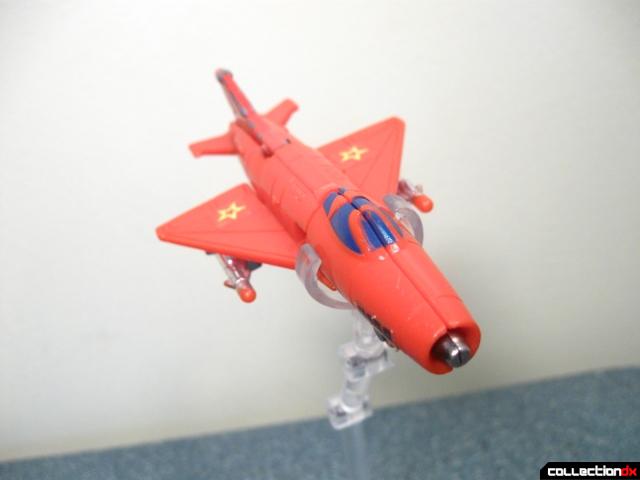 Overall Gunnyr is a Gobot who is not really remarkable but is eminently playable. His simple transformation and durable construction make him fun to just transform back and forth. Gunnyr is the kind of figure that emphasizes the Machine Robo mantra of being a small transformable puzzle where half the fun is in the act of converting it from one form to the other. The uniqueness of his vehicle mode combined with his simple yet charming design make Gunnyr an enjoyable toy for anyone into robots and airplanes (or airplanes that are robots). And I would be remiss to mention his name is spelled in an odd way just to emphasize his "Russian-ness" as it's just another thing that adds to the kitsch. As one of the last figures in the Gobots line, Gunnyr can be hard to come by, but he is not in high demand. There is also a European version that is dark green instead of communist red.

9 comments posted
I imagine him having a very

I imagine him having a very thick Russian accent for whatever reason (hey, it's a Soviet fighter jet after all^.^)

I kinda like having a Russian-er-SOVIET (Please go away*) robot. It means my OC Sasha isn't alone!

*if you get that reference, you get a cookie

I guess I don't get a cookie and I've never watched the OC.

OC means Original character. My OC Sasha is a Russian android and this was based off of a Soviet fighter jet so that was what I was saying.

If you seen Captain Planet you'd get the joke (I only liked the show due to how unintentionally funny it was^.^;;)

Sheesh, when I was a kid, we sincerely thought Captain Planet was awesome.

Well, he isn't on the Tvtropes Memetic badass page for nuttin'!

I thought it was an okay show IMHO. I always thought Linka was hot:D

In an alternate universe where "Rambo: The Force of Freedom" dominated the ratings over that piddling "GI Whatever It Was", three different third party companies are competing to make extra-sharp nosecones for the new, super-articulated Gunnyr. Meanwhile, that toy has been repainted as an Official Go-Bots Fan Club exclusive into the obscure "Jetfire" character from some other show about transforming robots.

...the green version of him. He was a solid toy, I had actually forgot about this until this review.

I was like I remember this toy but he wasn't red...

btw no CollectionDX Episode this week??