"Me Grimlock like to munch metal!" Grimlock was always one of my favorite Transformers back when I was a kid. It's funny that my other favorite was Skyfire, the complete opposite. Grimlock is a big, dumb monster while Skyfire is a gentle genius. But it's easy to have a character who is tough, cruel, and stupid. What's not easy to is to make the dope charming, and that's where Grimlock in the cartoon succeeds. He's not just a stupid, angry beast, he's also child-like and that's why he's endearing. Oddly, both characters had the same voice actor. 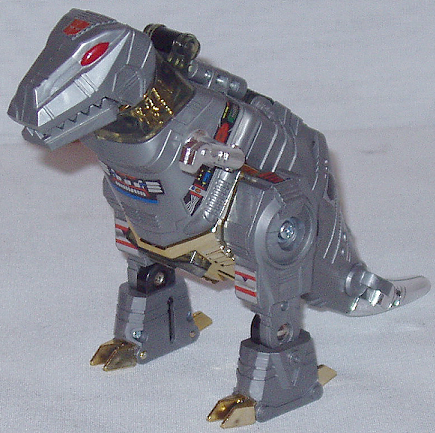 So how's the toy? Pretty nice! I'm a big fan of the Diaclone-derived early Transformers and the Dinobots, like Grimlock here, are no exception. This is a robot based on a decidedly outdated interpretation of what the prehistoric animal probably looked like, but that's cool with me. 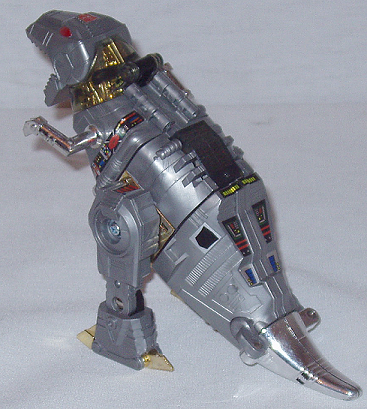 One of the strengths of these Diaclone-based toys is their level of detail. Grimlock is covered in neat little circuits and panels and the stickers really help the look. I especially like the clear plastic with the mechanical detail visible underneath. Very Henshin Cyborg. The toy has a cockpit where a Diaclone "Inchman" driver figure can fit comfortably. While I like the cartoon version of Grimlock quite a lot, I still really love the human pilot functionality of these toys. 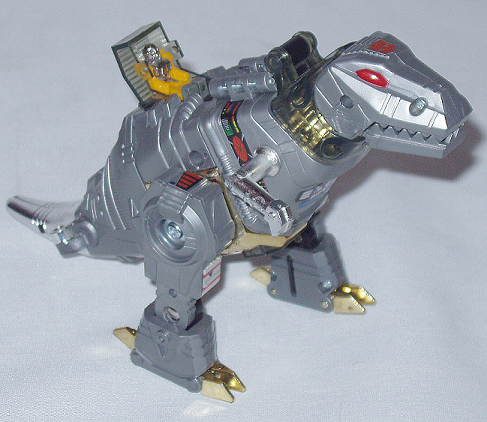 There are a few changes from the original Diaclone Dinosaur Robo incarnation, but the most obvious is that the blue crotch on the Diaclone toy is changed to red for the Transformers version. I don't have strong feelings either way, but the red diecast crotch looks nice with the robot's eyes. Another change is that the teeth of the American release are not as sharp as on the Diaclone original. 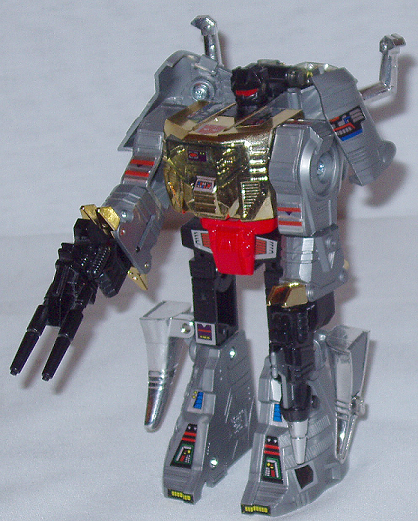 The transformation is simple enough but fun to perform. The toy comes weapons including a blaster, missile launcher, and sword. The sword is a little shorter than I'd like and with its red color, reminds me strongly of Jumbo Machinder Great Mazinger's little red butter knives, but the actual sculpting is pretty good. 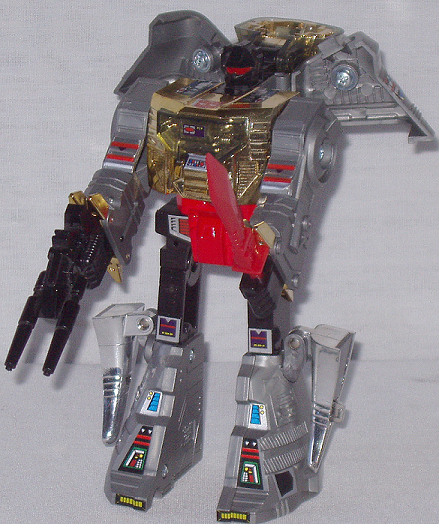 While this is definitely one of the nicer toys from the original Transformers line, it's always bugged me that the robot's head looks like it is too far back. I really think it would help the toy a lot of there were a way to slide his robo noggin forward about a centimeter, but oh well. Another flaw to watch out for is that like most of the Diaclone-based Transformers, Grimlock is fairly easy to break if you are not careful. The toy has looks, personality, and a lot of features later Transformers in the original line were lacking. Though its legs are completely immobile in robot mode, there's some decent poseability in dinosaur mode and I especially like the chomping jaws. Is the original Grimlock as nice as Masterpiece Grimlock? Probably not, but it's still a classy toy and one of the best of the early Transformers. Worth tracking down, even if you end up grabbing one of the funny colored reissues from Transformers Generation 2.

Do you own the Diaclone Dinosaur Robo Pre-Grimlock as well as G2, G1 bootleg & MP-08 Grimlock?

What I can remember from his file card, Grimlock was actually very smart and his "dumb" speech pattern was actually a vocal chip glitch.

This was actually one of the few transformers I bought as a kid. This toy and character was awesome! My dad bought it for me at Gemco in Pomona and I always admired the release and I actually liked the dinosaur mode more than the robot mode. I like the clear parts throughout as well.

This was just recently put on my list of toys to look out of my collection. I don't know what happen to my original but I still have the weapons.

Thanks for the review, looking forward to buying another.

As usual, the cartoon doesn't care what the tech specs card said. There was a whole episode about Grimlock getting an intelligence upgrade. It's not a speech impediment, he's just a moron.

There are three different characterizations to follow: The Marvel Comic, The Sunbow cartoon or the file cards.

Clearly you side with the cartoon.

I'll side with with card:

You don't even need the clear red thing to read it either!

Well, you're right that he was smarter in the comics, but he could still be kind of an idiot. I recall a period after Optimus Prime blew himself up where Grimlock was the Autobot leader. He told the Autobots to not bother saving humans and just hung around the spaceship all day. He forced the other Autobots to build him a crown.

The difference is probably that the writer of the comic for a good 50 issues was also the guy who wrote the tech specs whereas the TV show was a whole different group of writers.

Seriously, though, I really love the charm of the dopey monster. The Dinobot Island two parter is one of my favorite Transformers stories. I love the bit where Grimlock is ordering the Dinobots around and his commands are like, "Slag! Do fire stuff!"

Those inchman are tough to find for the original Kronoform -Diaclone. I think I only have 4 of them. Did the inchman come with this release of Grim?

Awesome retro commercials! Thanks for adding those links.
Flames actually shooting from the butane gas nozz in the mouth- killer.

Nah, this is the actual Transformers version of the toy. I grabbed several pilots over the years from various places. I know I got a set of 5 with my Kronoform Multiforce set but this driver is from a different Diaclone toy. I think it's from the late Diaclone period so it may be more or less correct for the T-Rex, but I'm not sure.

Correct bodystyle, but the one that came with the Diaclone version had black limbs and a teal body.

Thanks for the review.

I agree about the odd head placement. Eventually, I wrecked this toy as well, after so many years of play.

What struck me immediately the moment I got him was the (over) abundance of chrome and gold bling bling. That's still
one of those true G1 charms. Thanks for pointing out the driver's section ; i never realised he was a Diaclone once too.

I can't think of a superhero codename I would want less than "Inchman." :)

This toy is IMO one of the alltime best. Even if you didn't care about the Transformers show or comics (allthough I do like both) you would have to admit how awesome a robot T-Rex that turns into a robot dude is.

I have to say though,if I was Japanese and I bought this toy,I'd be a little disapointed that he didn't spit fire like in the commercial! Don't they have truth-in-advertising laws there?!?

I just picked up a Grimlock for the first time in the mother of all Craigslist finds. He is in great shape, and needed only a quick super glue repair to the joint that holds the dino head on in robot mode. Once I get some reprolabels, this will be one of the highlights of my collection! Love the Dinobots and Grimlock was the best of them. Nice review!

Nice score! Glad you liked the review. If you get a chance, snag a driver for your Grimlock!

Incidentally, anyone around here have the Justitoys "WST Dinorobots"? They're miniature versions of the Dinobots (unlicensed), but with all the diecast, clear, and chrome bits the originals had. They actually added a new joint so that the robot head can slide forward a bit (and actually turn, I think). Of course, you have to move it back and straighten it out to transform back into dino mode, but I think the addition is fantastic!

kidnicky, have you seen the other classic Takara ads??? Oh man, they're nuts! There are a bunch on the TBDX channel and probably all over the place on Youtube. Yeah, truth in advertising? Forget about it! ;)

I have the Takara SF Land book that came with a Video CD of all the old Takara Henshin Cyborg, Microman, and Diaclone commercials so I have a big fat wad of them. Delicious stop motion fun.

Oh man...that Takara SF Land is hot! SUCH a critical resource for HC/Microman/Diaclone fans. Consider me jealous, man! I really need to get me a damn copy...but every time I see one on Y!J, it's for over $100... :(

Oh yeah,I've seen a bunch of them. They're all that strange mix of tongue-in-cheek-funny and legitimately awesome that only Japan knows how to harness.

I should've known that you got a TBDX channel on YouTube.
I'm gonna add this to my bookmark right this minute.

This was my first TF toy together with a G1 Insecticon Shrapnel! I was a 4th grader then and I took care of them for 15 or 16 years, only to have them dismembered by my nephew and niece.

I'm still keeping the parts though (or whatever were left of them) somewhere at my folk's place.

Thanks! This brought a lot of good memories!

Glad you liked the review! How did you relatives break your toys? Did they just smash them or something? I woulda been pissed!

My folks somehow got their hands on them and gave them to my 10 month old niece and 9 month old nephew as if they havent had enough toddler toys to play with. Imagine a 16-something year old toy left in the hands of a toddler.

Then about 3 years ago, I got wounded up even more when I saw on a toy-store's website where I used to purchase online, they're reselling some original G1 issues of Grimlock and other Dinobots and Insecticons (slightly played; box & all still intact) for $2500 each!

Grimlock's most vulnerable parts are the T-Rex arms and his neck (Because, well, clear ABS being brittle)