When Matchbox decided to produce their own figures and accessories for Harmony Gold’s Robotech series in 1986 little did they know that many of their releases would be ill-conceived for hardcore Macross/Mospeada/Southern Cross collectors. Lack of proper knowledge and art design led to nearly an entire line of action figures and accessories that was misguided but at best accidentally releasing items that filled a void that the original Japanese market never marketed. 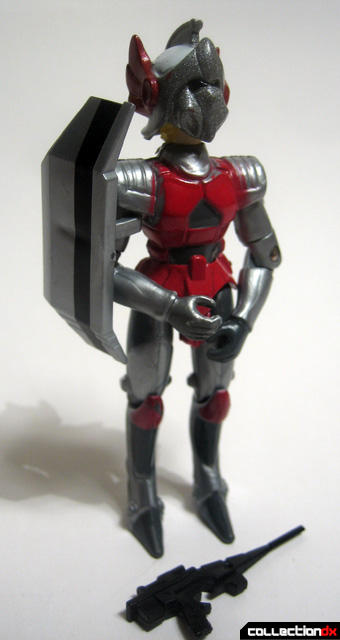 Take for instance Super Dimension Cavalry Southern Cross an Anime that was originally canceled after only 23 episodes in 1984. If you are a Southern Cross/ Robotech Masters fan you are only too aware of the lack of items released in Japan, especially toys. I personally built nearly all the 1/12 kits of the various armor character kits of Southern Cross and besides a kit of the Hover Bike and Sol Bioroid no other items were manufactured. That includes the main vehicle of the Series: the Spartas/ Veritech Hover Tank and Auroran. But when it came to actual toys, no manufacturer picked up the mantle for any of the properties from Southern Cross in Japan. 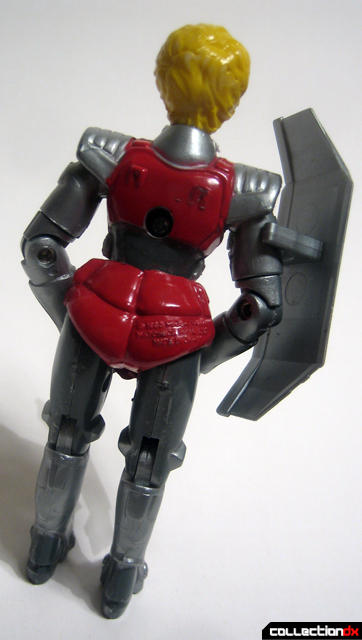 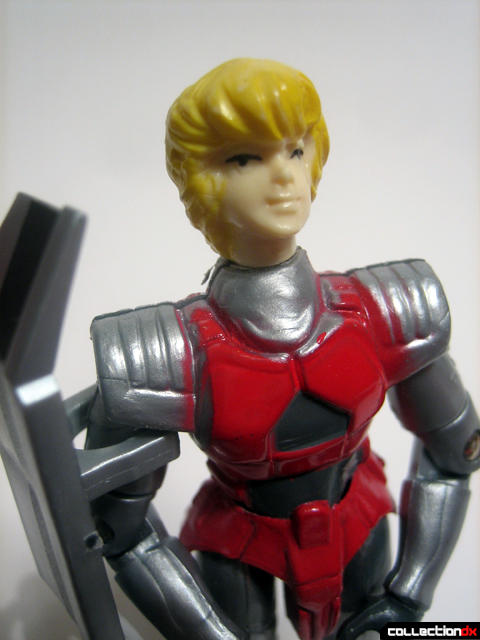 Dana figure is an OK sculpt, the problems lay mostly in the body proportions. It seems that all the figures that were sculpted for Matchbox’s Robotech line were all sculpted with small waists and bodies, and most of the time the proportions were made up in the neck area of all places. Dana’s face sculpt is ok, but does not look anime enough for my tastes. It also looks like the eyes are on the side of the face like some sort of bird. 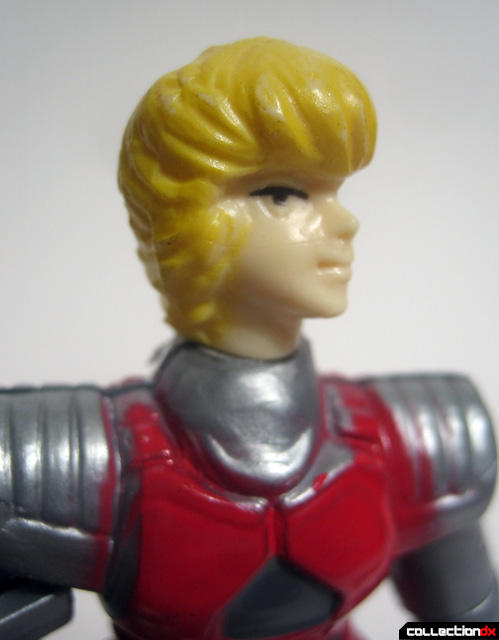 The quality control was not the best, with many Robotech toys falling apart at seams and paint masks not on register, with this figure being good example of the paint mask being off center. Also the shoulder movement is limited to sideways action because of the armor shoulder pads. Be wary of putting the rifle in the hand as the rifle handle is too large and thumbs are known to be broken off like my original figure I bought all those years ago. 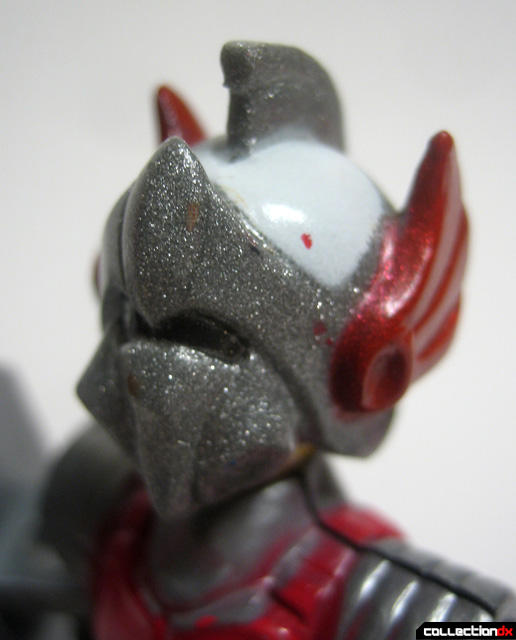 The rubber helmet sculpt is off a bit as well but it is a cool little accessory that really fills out the figure especially with the shield that snaps onto the figure's arm. 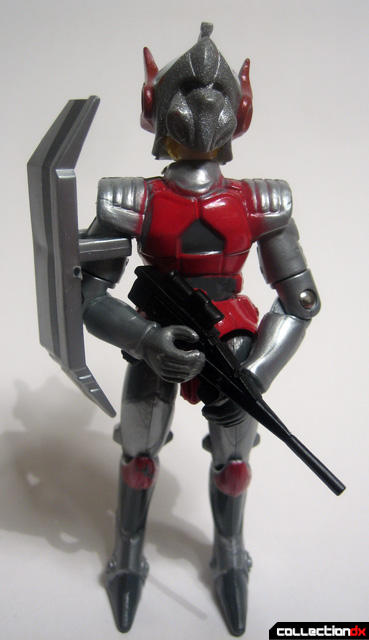 But here is the real kicker, I like this figure for one reason and one reason only: That it is an accessory to one of Matchbox's coolest toys that they accidentally got right in a way, The Spartas/ Veritech Hover Tank. If you own the Spartan Hover Tank this figure is a must-have for your Southern Cross/ Robotech Masters collection. 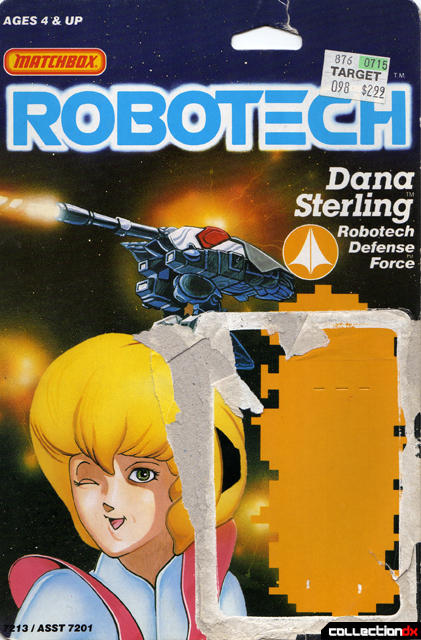 As stated before with my Scott Bernard/ Stick Bernard review I would pass on the Robotech Matchbox figure series unless you are a hardcore completist of Macross/Mospeada/Southern Cross. It is a shame that Matchbox did not see the line through and release other figures of the 15th Squadron as it would have been great to see all the other great and colorful Southern Cross characters and armor in 1:18 scale. 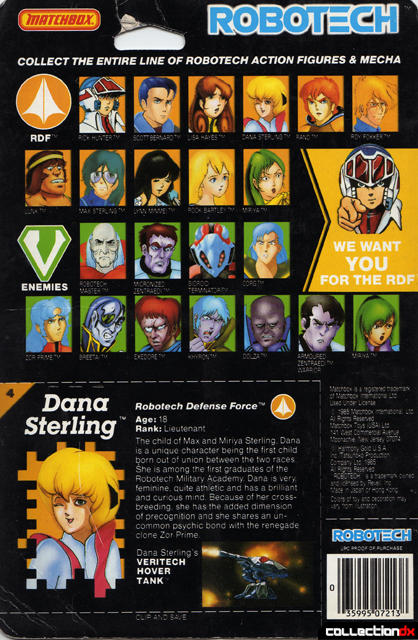 The huge irony of all this is that the figures were manufactured in Japan for Matchbox although I do not see the workmanship that we expect of toys made in Japan. Many of these Robotech figures were later reissued under Harmony Gold’s own brand with even less quality than before. I bought this figure from a dealer at Frank & Sons for $10.00 but you can get still sealed figure for under $35.00, especially the Harmony Gold produced figures.

3 comments posted
plus, it took two years for Matchbox to release these

That company really missed the boat, although I like the alien vehicles (specifically the Invid,) and you gotta love them for sticking to their die cast roots and releasing some really sweet Takatoku repaints stateside.

I just wished Matchbox released more Takatoku items here in the states. The super deformed valkyries, although were a solid toy, were huge let down which only left Jetfire as the only fullsize valkyrie available in the states.

Much agreed on the the Invid/Battle Pods/Spartas vehicles that were manufactured, They were some great and solid items that have held up over the years.

I should have my Sparta review up shortly.

As much as the toy itself doesn't look very good, she somehow manages to look kinda cute. Weird..