This has to be one of my all-time favorite toys. The Deluxe Voltron 1 Warrior set. I’ve been obsessed by this character since I was a little kid.

When I was about to turn 12, I asked my parents for a voltron. I probably should have been specific and said the “LION” voltron, but I didn’t. My birthday came and I got the deluxe Vehicle Voltron. I was so let down. I really wanted the Lion Voltron. But when life hands you lemons, you make lemonade. I got into the Vehicle Voltron eventually. Its interesting combination and huge size established the precedent of what I like about toys today. 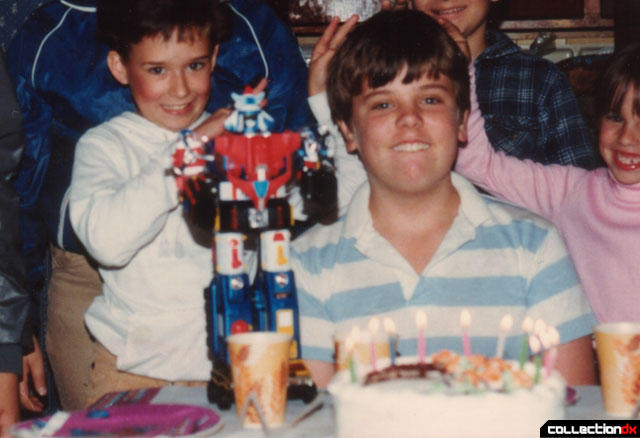 The story of this toy is a bit complicated...

The original Character comes from the 1982 Japanese Animated series Armored Fleet Dairugger XV (機甲艦隊 ダイラガーXV - Kikō Kantai Dairagā XV). Produced by Toei, the series ran for 52 episodes and ran until 1983. The premise of the show was that Dairugger XV was a space exploration team. The individual Dairugger ships could combine their 15 vehicles into 3 individual teams, or combine into one larger robot.

The show was popular enough for Popy to make a few toys for it. Along with the standard and DX chogokin toys, Popy planned a larger, diecast, combining version, to be in the same line as the SG-01 Chokinzoku ("Super Metal") Tetsujun 28. The toy was designed by Katsushi Murakami (who also designed the SG-01) but the expense of the SG-01 caused the line to be cancelled. Popy decided to move forward with the toy, but in plastic instead of metal. This toy was called the Deluxe Kikougattai KikouKantai Dairugger XV. For a more in-depth look at why the SG-01 was the last of its kind, check out this great translation of an article from the Chogokin Chronicle by Matt Alt.

The original Popy versions were sold as a boxed set, or as three sets of 5.

In 1983, an American company called World Events Productions was looking for Japanese shows to import and translate for American audiences. Golion, Albegas and Dairugger XV were chosen. (Another show, Daltanious, was considered, but never got aired.) These shows would become known as Voltron, although Voltron II was never aired.

Matchbox got the rights to produce toys for Voltron, and decided to use the Japanese toys as a base for their American products. Where the DX Golion toy had to be heavily modified to meet US safety standards, the large Dairugger did not. In fact, all that was changed between the US and Japanese versions were the omission of a sword, stickers, and three small antennae. The very first versions of the Deluxe Voltron Warrior robot still has all the Japanese copyright info on the backs of the vehicles (Later versions do not). 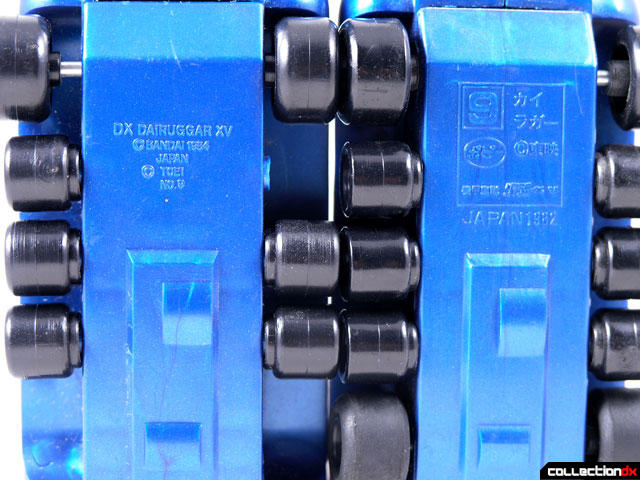 The Deluxe Voltron Warrior also had two different kinds of packaging. The first version had an opening cover that revealed a die-cut window, while later versions just had a solid box. 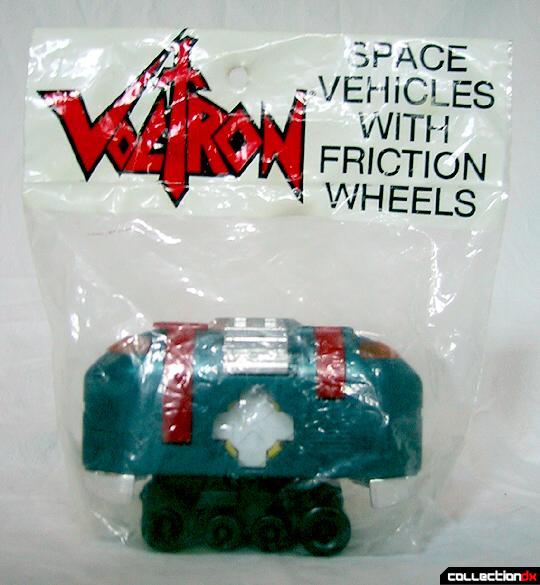 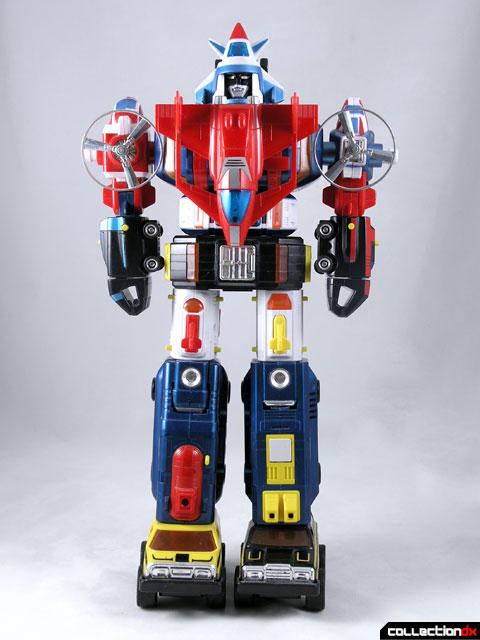 The Deluxe Voltron Warrior set is comprised of 15 Individual vehicles that can combine three teams, or the full deluxe robot. 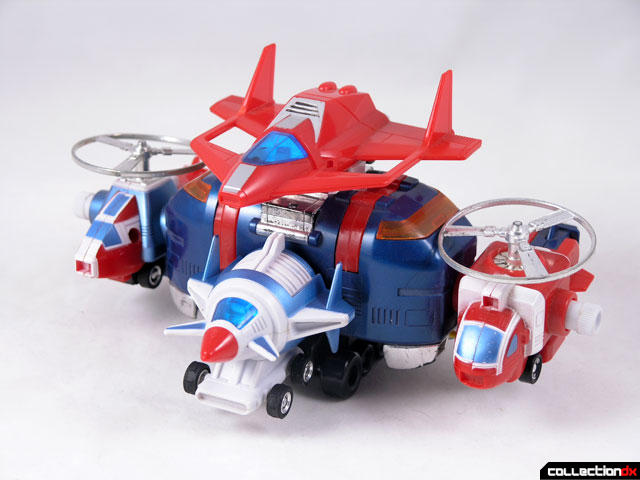 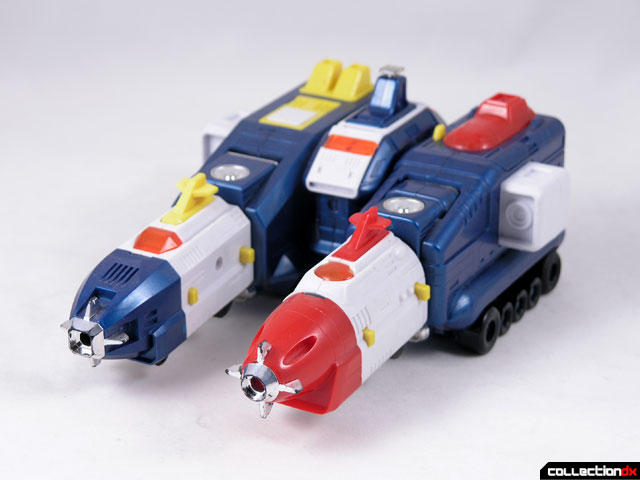 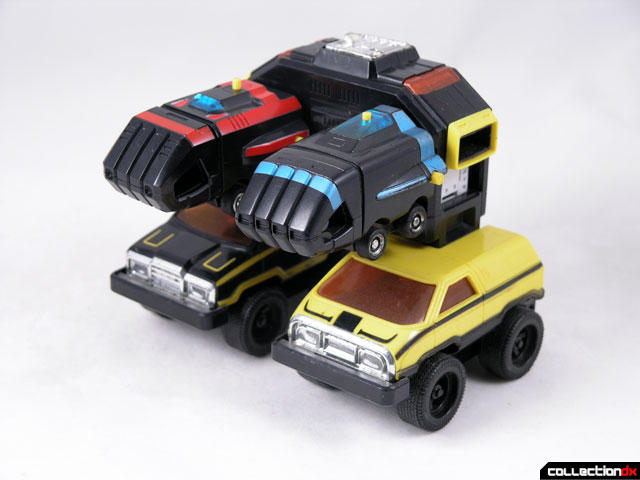 Voltron is not a sturdy toy. The plastic can be brittle, and the connection points wear out easily. The fists break, the tires dry up. The toy just doesn’t age well. It just wasn’t able to stand the punishment a young child was going to put it through. Finding a unused mint one is a rare find, and although parts are plentiful on ebay, piecing one together from loose bits is next to impossible.

There have been many bootleg versions of this toy out there, some produced as recently as 2004. There was a version sold at Toys R Us that was very high quality, and even included a sword (something the US release did not). It’s worth getting just to have the sword. You could also get fists from this toy as well. 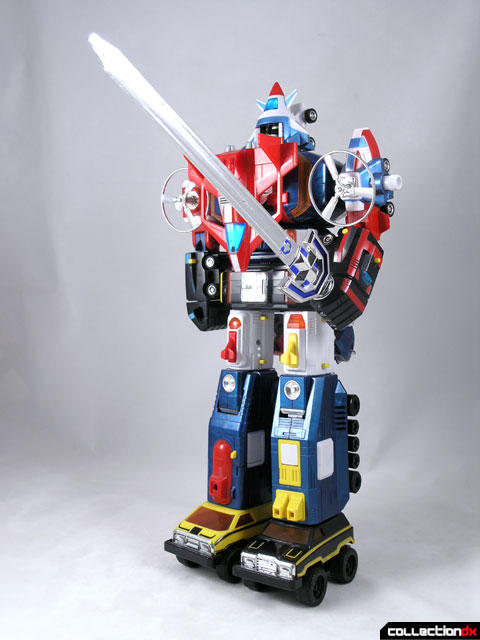 Despite all its flaws, I really love this toy. Part of it is sentimental, but part of it is that it is so damn aesthetically pleasing. It’s a big chunky robot toy that shoots fists and transforms.

On a personal note, It was this toy that began me on my path of rooting for the underdog so to speak. NOBODY liked Vehicle Voltron, including me. He was always second best. But I really identified with it and that concept at a young age. Since then I have always been drawn to the things that are unpopular or uncool. It’s part of my nature that I can trace back to this toy. 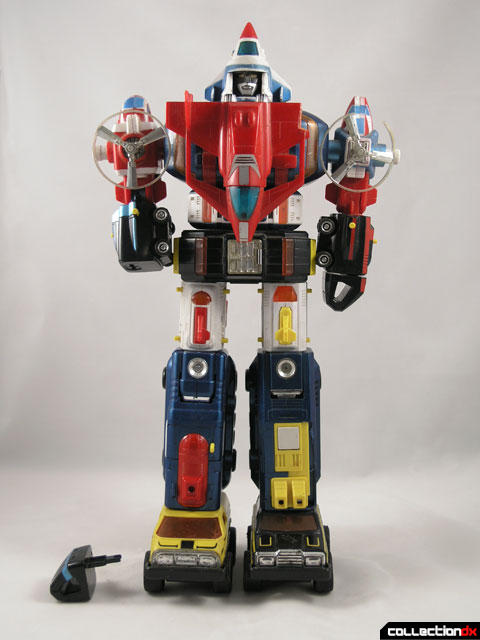 My original Voltron 1 from 1985, as he looks today

The vehicle Voltron was not my first Voltron, the blue gladiator Voltron was(that's another story) but it was far more sought after by the kids in my 5th-6th grade class than the lion Voltron. We all liked the lion Voltron of course but when the vehicle Voltron appeared one day on the TV show instead of the lion Voltron, I along with everyone else in my class were hooked! The story was kind of like Star Trek, seek out and find new life kind of thing. We all liked the stories much better than the Lion Voltron. My friend bought the air team set first and I bought the sea team and land team sets respectively. You could do a lot more with the vehicle Voltron than the lion set obviously, the big downfall was like you said in your review, the toy just didn't hold up well. It was not well made, the leg connection points were the first to go, I had to wrap electrical tape around the connection points to get them to stay together when assembled. Lots of weak plastic joints. I eventually worked out a trade with my friend to get his air team set. Still it was the holy grail back then and I had a lot of fun with that toy. Hopefully we will see a masterpiece version soon! I'd be the first to lay my money down for that one!

I posted a comment on a more recent review of a diecast dairugger dx.

I actually have the bootleg version sold at Toys R Us and I believe I got it back in 2000 from a toys r us in Puerto Rico.

here a couple of pics:

I have this toy as well, slightly different and no gun. It's a nicely done bootleg!

Nice review! I always wanted this as a kid and I finally got it off of eBay just recently. The only problem is that the hip-abd pieces/armored transport-communications module are stuck together. Am I supposed to push the yellow lever while pulling them apart or is that strictly to get the leg tabs back in? Or does pushing those leg tabs back in push the comm module out?

That lever is a bitch for sure. If you can get it to click it should disengage both the leg posts and the other side at once. I used to use a screwdriver to push it over, it was so hard to do.

Shortly after I post my message, I weighed the pros and cons of leaving the two together or just for the heck of it try to separate them even if something breaks....I used a wrench to push that lever and it finally came loose. Unfortunately, on a separate note, the tabs on one of the legs have broken after just one dis-assembly. The leg still connects together fortunately.

When I look back on Micronauts and now this Voltron, I cannot see how they sold these toys to kids as they can break SO easily. I don't know how any kid could move this lever either.

And after now playing with this Voltron, I think a masterpiece version would be easy to make with the technology they have now to make toys. It could be much sturdier, too. Oh well, one could only wish.

Interesting that according to a Sears catalog (or JC Penny), Vehicle Voltron and Lion Voltron were $70 each which was a lot in the 80's.

I'm coveting THE HELL out of your Dairugger XV!!!

I prrfered this one over lion force, especially in being better written stories, plus better characterisation for no one was really bad or good. Lionforce was too woden, too divided into god or bad.