The transforming robot craze of the 80's a had few winners, a lot of losers, and even more obscure dead ends. Zybots by Remco were quite obviously meant to follow on the success of Transformers and Gobots but with a shoestring budget. Often they were much simpler than the equivalent Machine Robo type toy and were usually all plastic. To my knowledge few if any of them even had diecast parts which means that even the humble Convertors had an edge over Zybots.

Looking back on a lot of these bargain bin figures it is easy to see why so many of them failed to catch on. Lacking the polish of their contemporaries and possessing no tie in media meant the Zybots were destined to be forgotten. Like Josh, I have an affinity to for these lesser known toys and would often see them in low cost lots for things like Gobots and Transformers. One particular figure caught my eye and it turned out to be one of the more charming entries in the line. 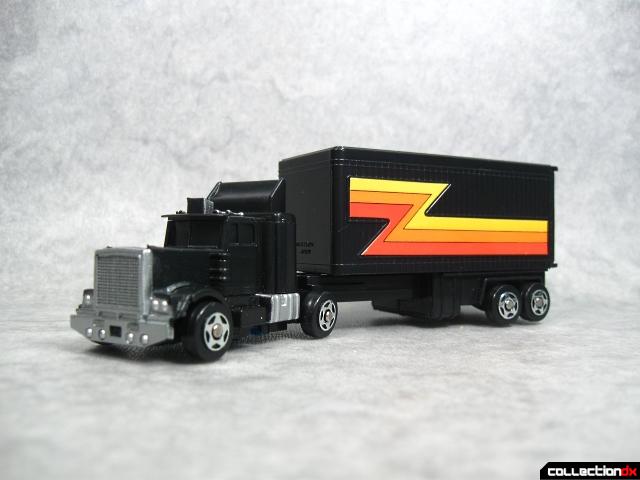 So this is Tractor-Trailer who is exactly what his name implies. At a little under six inches long, this all plastic truck can roll around on a full set of wheels and features an articulated hitch. Unlike your typical semi, the cab cannot be unhooked from the trailer without partially disassembling the toy. Despite his basic color scheme, Tractor-Trailer still looks quite powerful and dignified like a real king of the road. 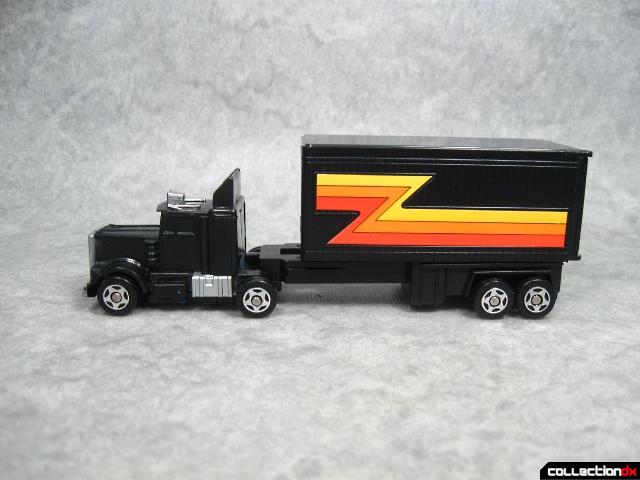 Either side of the big boxy container is adorned with a wonderfully 80's sticker. I'd like to believe the front of swoosh is meant to be a "Z" for Zybots. From the side, Tractor-Trailer still looks pretty authentic although it's easier to notice he's missing the rear wheels from his cab. I believe this was done so he could still articulate like a normal semi-truck as other the hitch would knock into any additional wheels otherwise. This oversight makes him seem less refined than other toys of a similar nature. 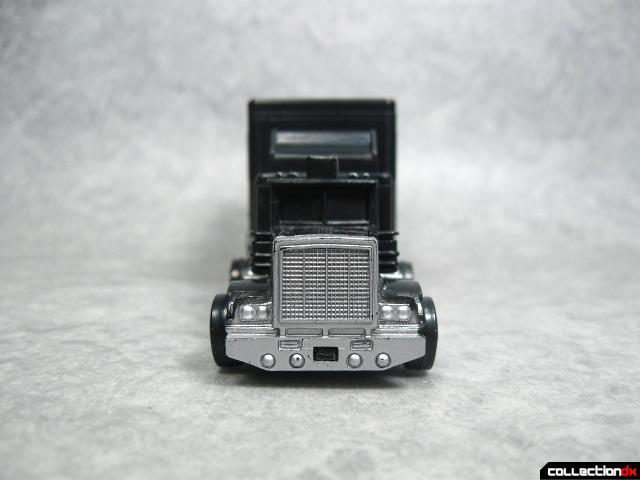 The cab is quite detailed overall and could easily pass for a regular truck toy. 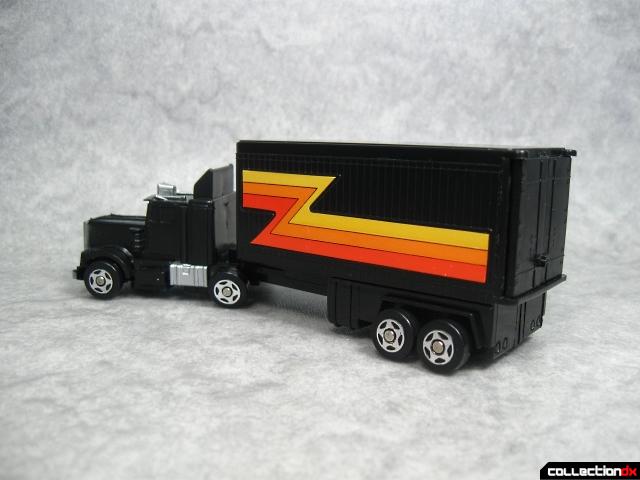 Moving around to the rear, Tractor-Trailer even has molded (unpainted) tail lights in the appropriate place. 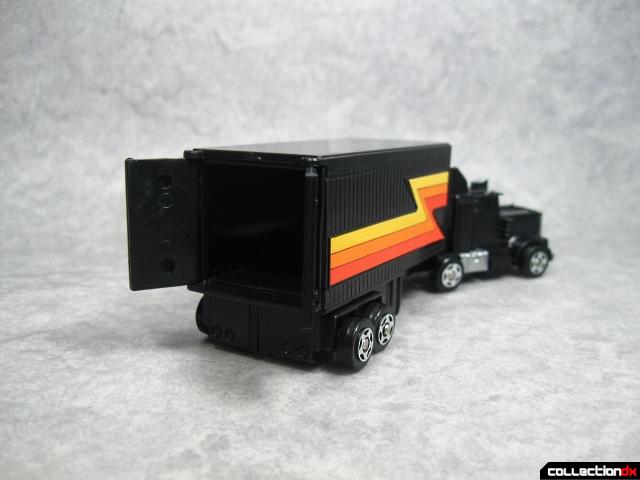 It even features working doors in the back! 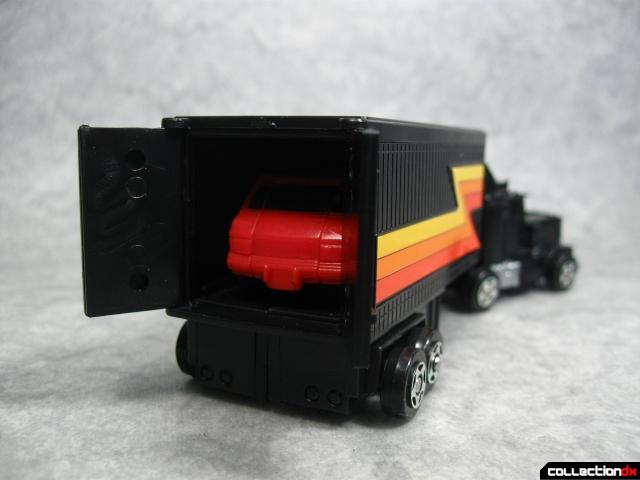 A small sized car like Micromaster Tote can fit inside the trailer. 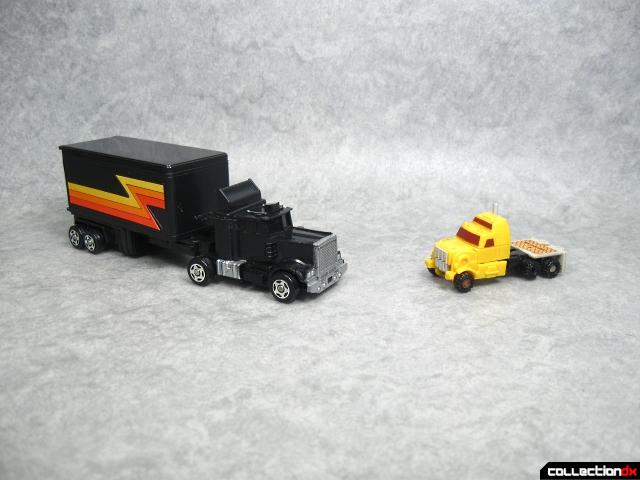 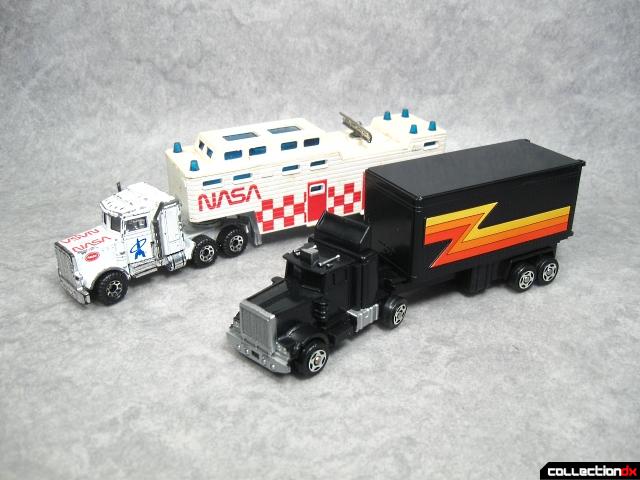 Tractor-Trailer looks pleasingly inconspicuous next to an authentic diecast truck toy like the famous NASA semi. He's quite the robot in disguise. 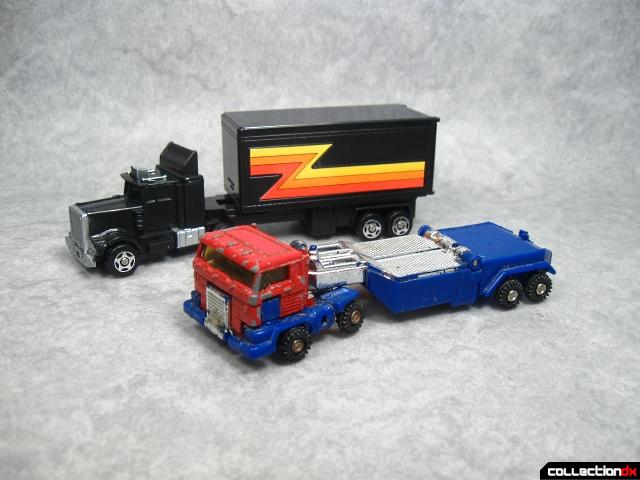 As an all-in-one transformable truck, Tractor-Trailer seems to draw inspiration from fan favorite Gobot, Road Ranger who has a similar design to the Remco toy. 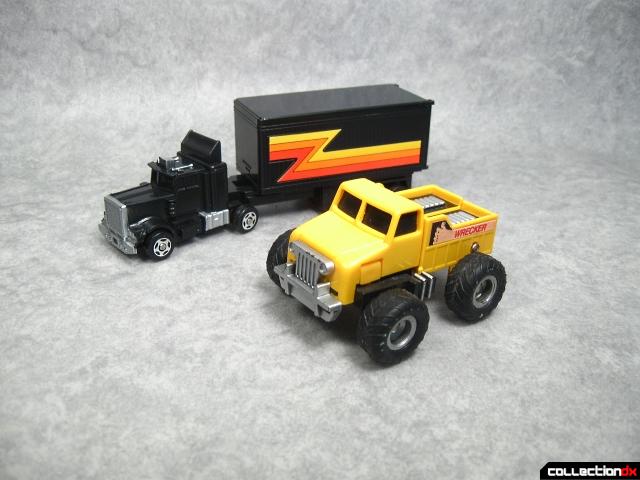 And here is Tractor-Trailer next to his fellow Zybot, Tow Truck. The line had a good variety as far as vehicle types were concerned. 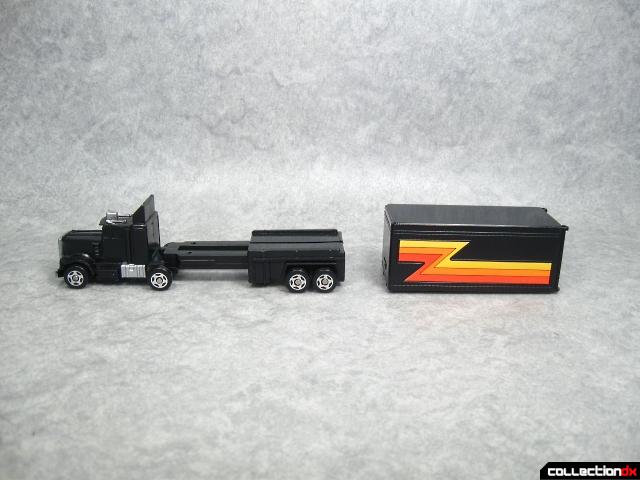 To transform Tractor-Trailer, you have to remove the container which exposes the simple sliding mechanism for his legs. 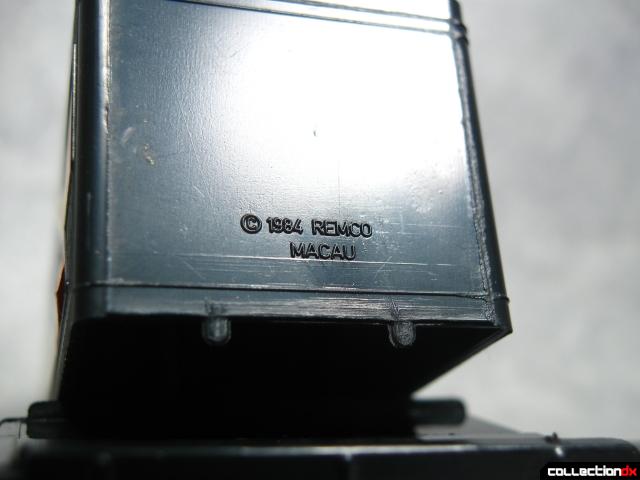 Detaching the container also makes it easier to see the copyright markings on the front. Vintage 1984 by Remco. 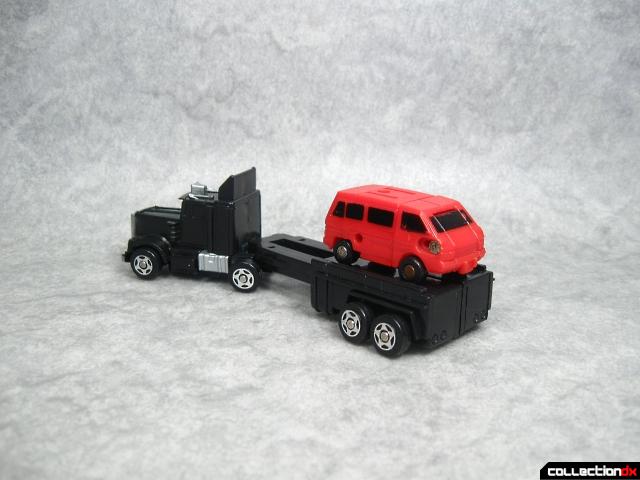 Without his container, Tractor-Trailer still makes for a decent flatbed with the backs of legs serving as a tiny platform. Even with the cover removed, Tote still abides his ride. 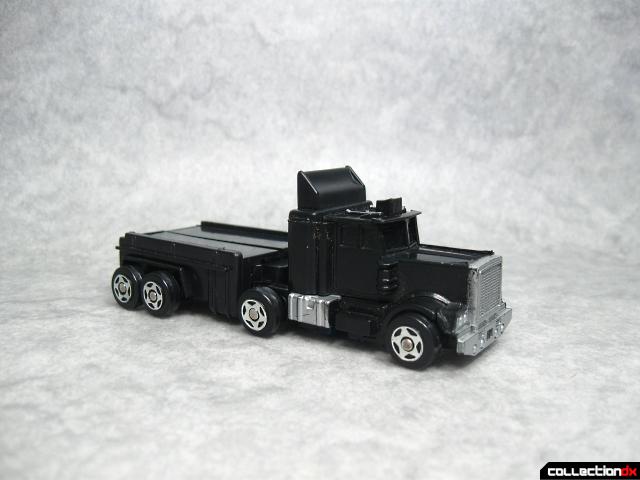 On the way to robot mode you can slide his legs back to create a long nose transport truck. 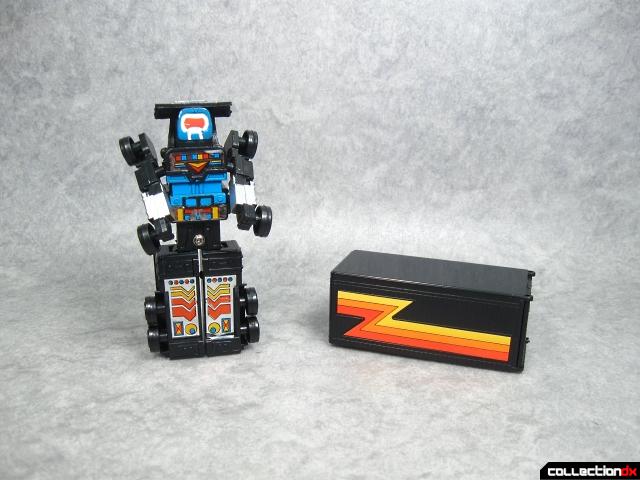 In robot mode Tractor-Trailer compacts into a humanoid machine that stands four inches tall. His transformation is quite basic with a pair of pull-out arms rounding out the process. Similar to Optimus Prime, part of the truck mode has to just chill out off camera while Tractor-Trailer is off fighting evil. 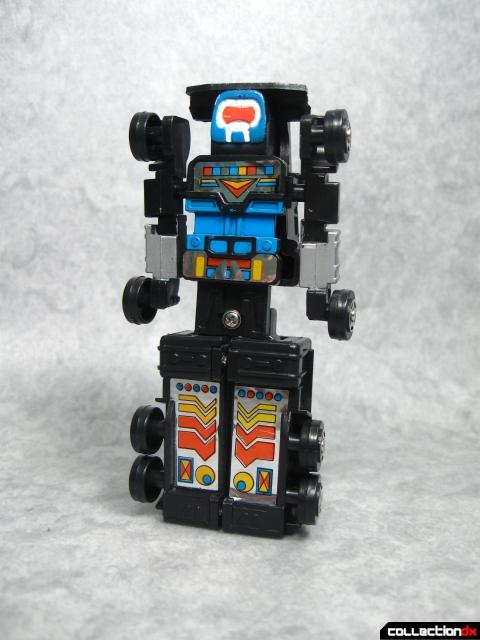 Convertors are often seen as less refined Gobots and in many ways Zybots manage to shimmy under even that low bar. There is certainly an attempt made to emulate the style of Bandai's Machine Robo figures but here it is so much simpler in execution with major details being represented by huge foil stickers. 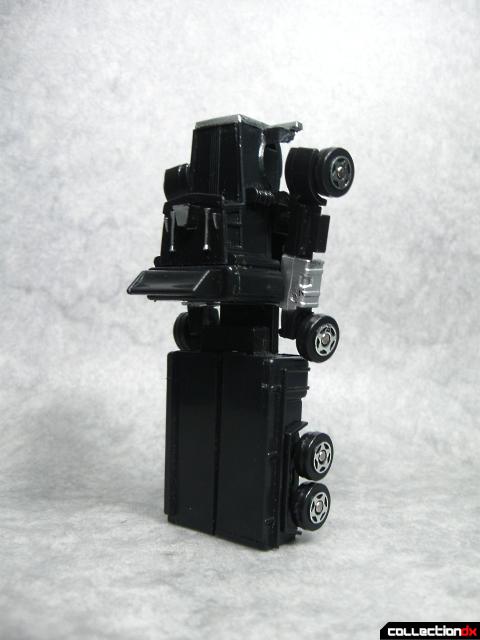 From the rear, Tractor-Trailer is quite obviously just the shortened vehicle form standing on end. I suppose if you left his lower legs extended you would get a really tall robot... 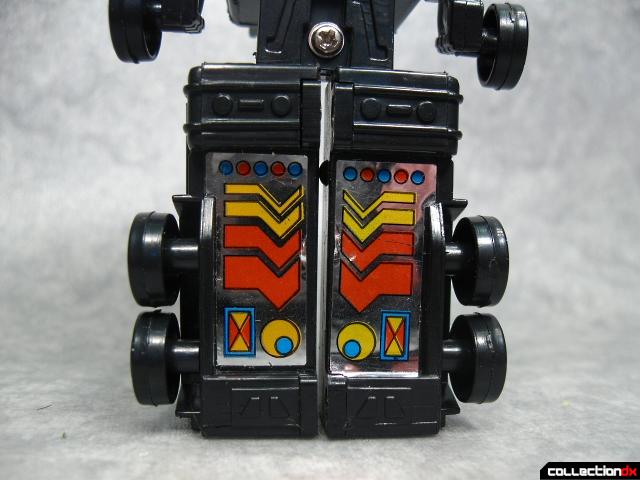 Tractor-Trailer's lower legs are separate from each other and split apart just a bit for robot mode. Each shin is further enhanced with colorful patterns of "robot stuff" and also what looks like a pair of googly eyes. 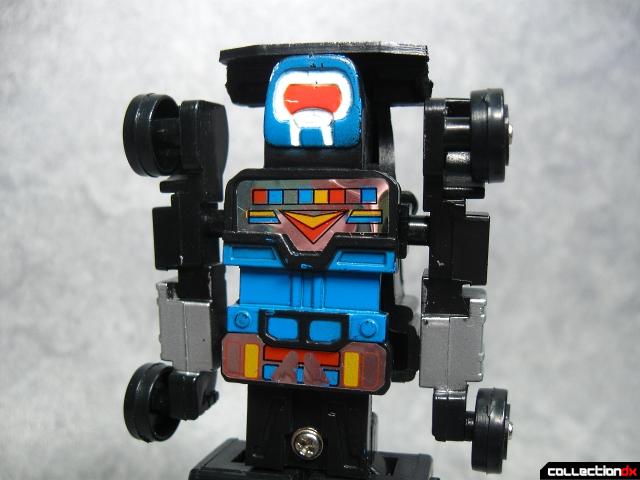 His painted blue midriff is a passable Gobot imitation with the main attraction being two reflective stickers that are a mirror to Tractor-Trailer's robot soul. 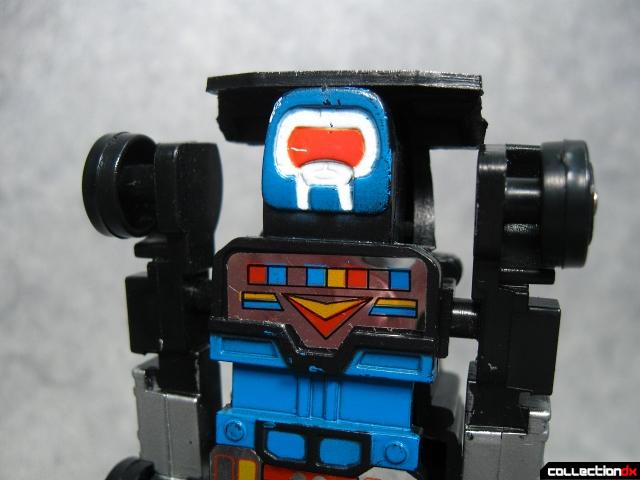 One cannot help but be drawn to the bright red "eye" that serves as the center point of Tractor-Trailer's face. This is probably the weakest part of the robot mode as the design is too flat and far too abstract. It's hard to see but he has a tiny oval that I believe are attempting to serve as lips. Again there is definitely a conscious attempt to copy Machine Robo as the overall layout is eerily similar to Highway Robo's face. 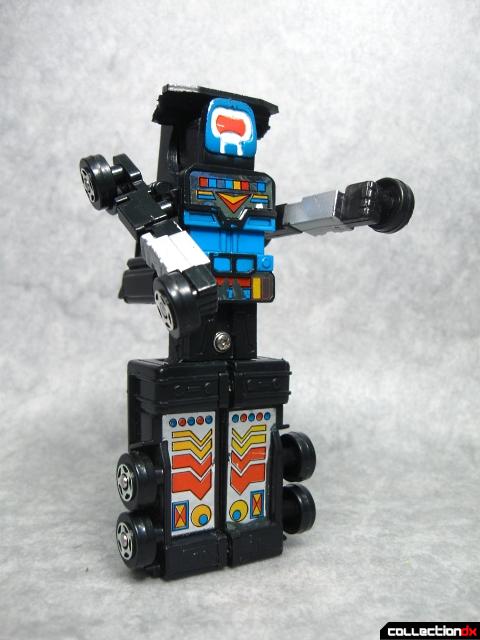 Tractor-Trailer's arms feature the usual level of articulation for a toy of this era each limb being able to rotate at the "shoulder." They are also mounted on a small hinge that tends to loosen with age so the arms drop downward. 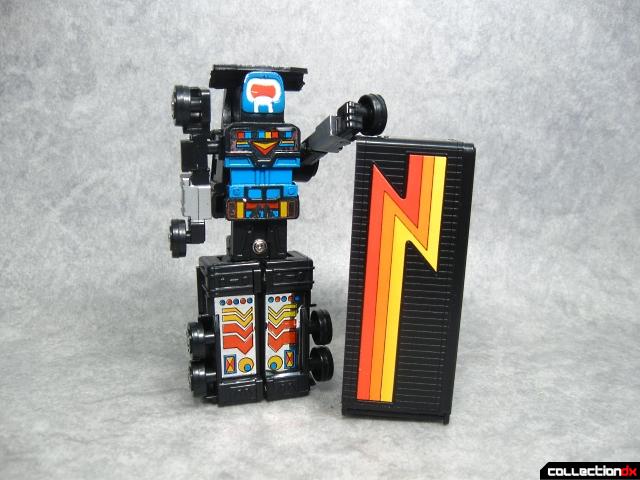 At the very least he can proudly show off those sweet swooshes on his container. Righteous decals, bro. 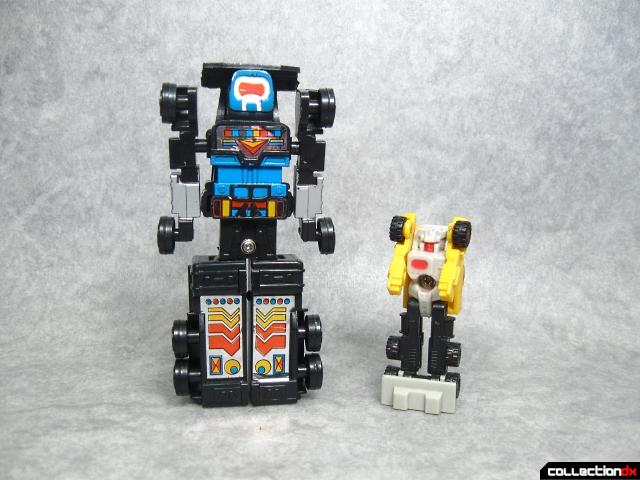 Among robots of a similar vintage, Tractor-Trailer looks a bit simple even when compared to the minuscule Ironworks. 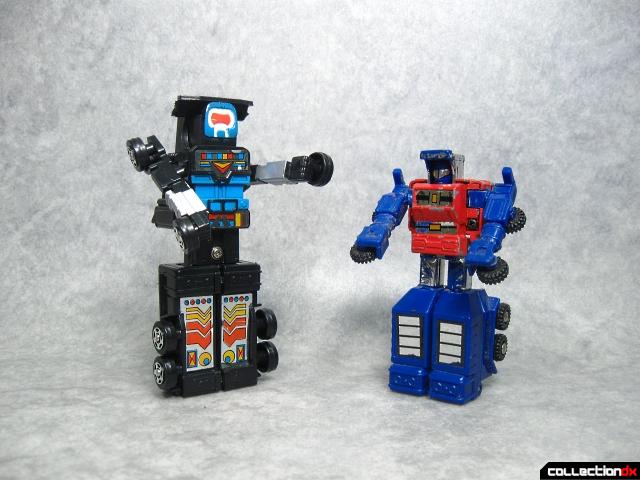 When placed next to Road Ranger in robot mode, the similarities are even more evident. In many ways Tractor-Trailer is the Gobot that never was. 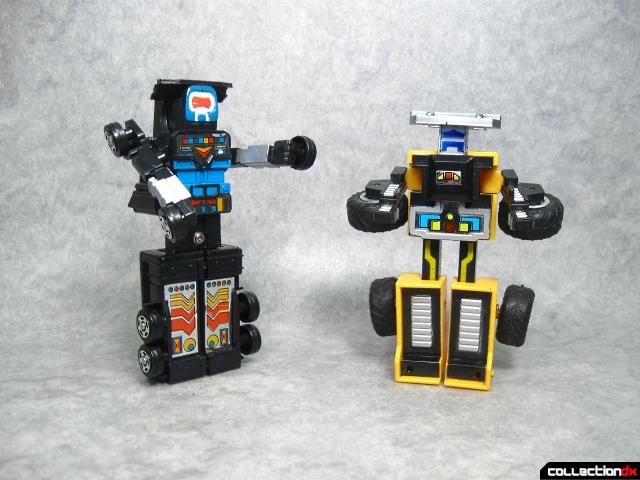 Here he is with Tow Truck whom I will cover in a later review. Both Zybots have such an unrefined simplicity to them but I find Tractor-Trailer to be the better of the two.

Now I wanted to have the Zybots interact with more Transformers but there were some hiccups... 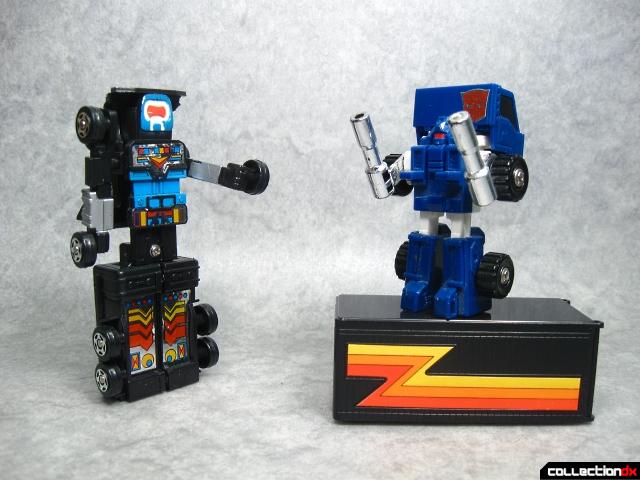 "Hey you! Get down from my container right now!"

"No way Mister Lamebot! I only take orders from Optimus Pri-" 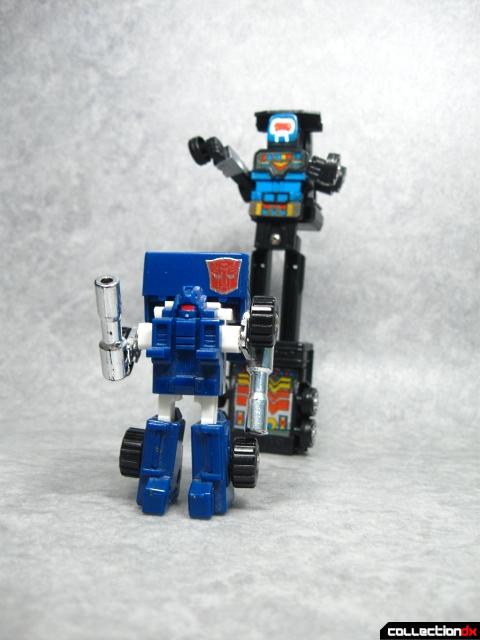 Tractor-Trailer is not some amazing hidden gem of a toy but is certainly a charming little entry in a mostly forgotten line. The truck mode is quite attractive for its size and the robot mode is competent if a bit simple. Fans of old style transformable trucks will probably get the most out of this figure. He does a good job of blending in with regular semis and has some basic play features that help round out the package. If you're looking for Tractor-Trailer on the aftermarket, try to get him with his container as it is essential for completing the vehicle mode. He was available by himself or in the massive 10 Piece Deluxe Gift Set. Tractor-Trailer can usually be had by himself for around $10 to $20 depending on his condition as Zybots aren't really in high demand.

6 comments posted
It could be worse

Now that you have pointed out the "googly eye" decals on the lower legs, I really want to see this guy flipped upside down with the arms arranged as legs/feet/stabilizers to make a block-headed abomination of a robot even more awkward than the intended form.

I keep making jokes about Zybots, but I had the blue one of this guy!

Guess what appears on Robot Chicken:

I like how Starscream's legs were mis-transformed to keep him in frame.

I had this as a kid and a couple years ago I was able to find this MIB. I think he looks great in my Machine Robo collection, though I am not much of a fan of the other bots from the line.

These toys arent that bad. I remeber seeing a Zybots combiner somewhere. It was real odd looking,just like the Bots Master combiner. I wonder when I will see a Bots Master review on here....