They say that time heals all wounds. I would like to amend that time also cools down petty nerd rivalries. For the longest time the Gobots were generally considered to be the vastly inferior competitor to the mighty robots known as the Transformers. Decades passed and the schoolyard arguments died down. Also it didn't hurt that Hasbro had bought out Tonka and acquired all rights to the Gobots brand, which helped assuage the fear some harbored by some that Gobots managed to garner a little success. With all the baggage out of the way, collectors and high minded toy philosophers could finally sit down and enjoy some classic transforming robot toys.

All that being said, I gotta say Gobots was still way better cuz they had the guts to include a bunch of female characters in the main cast right off the bat unlike those *clearly* sexist Transformers. Sometimes you have to praise the small victories ya know? 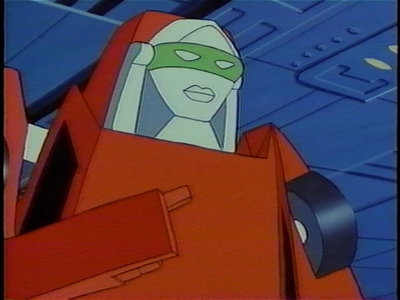 Sparky gets the notable distinction of being one of the few toys created by Bandai specifically for the Gobots line and for being a reoccurring side characters who is a girl. Alongside fellow Gogirls (Girlbots?) Small Foot and Path Finder, Sparky was another competent member of the heroic Guardians. She has a pretty cool toy too. 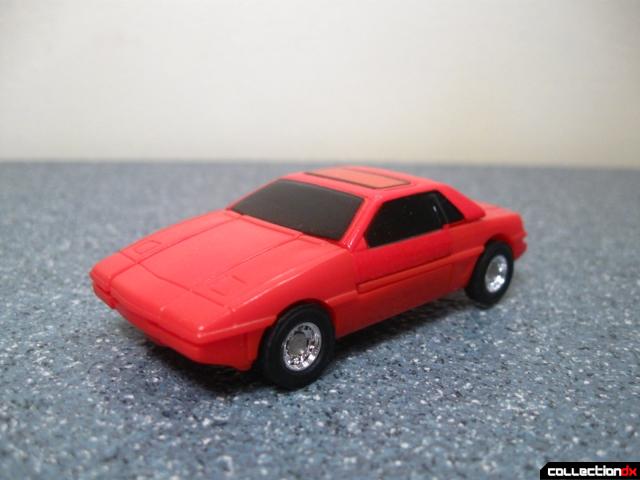 Sparky's car mode is a nice and compact little Pontiac Fiero. The Fiero itself is a simple 80's sports car that is well suited to being a small toy. The windows and roof of the car mode are all one solid diecast metal piece. Sparky's four rolling wheels all have rubber tires. 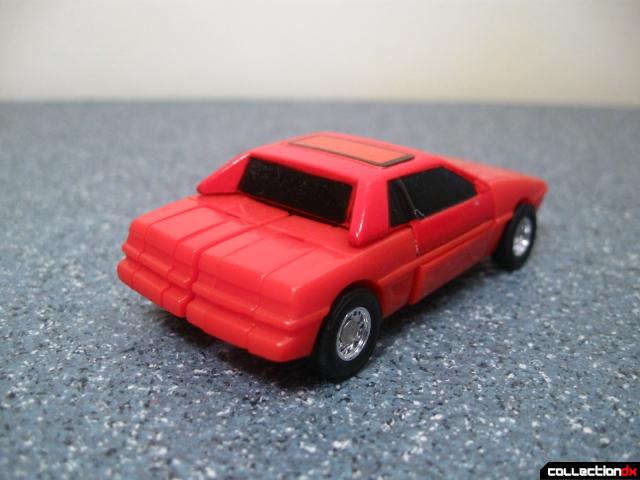 Aside for a few obvious seams, Sparky makes a pretty convincing little toy car. She's a little under three inches long in car mode. For whatever reason the sunroof on top of the car is represented with a sticker that consists of a red block with a black outline. I'm pretty sure the paint underneath the sticker is still red but I suppose that was one facet of the car's design that had to be accentuated at all costs. 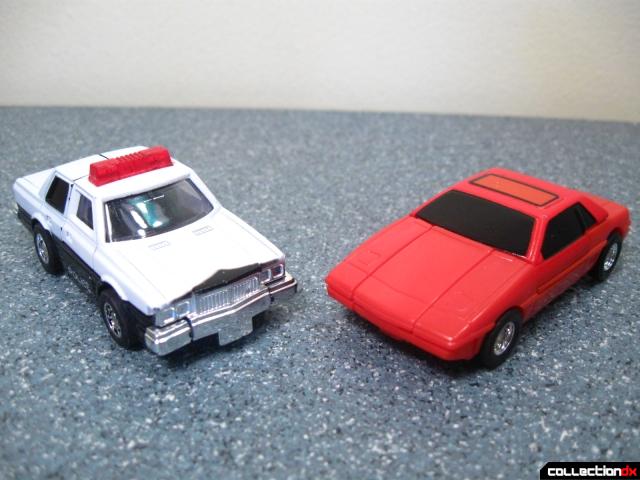 Sparky looks right at home next to an early Machine Robo derived figure like Hans Cuff. 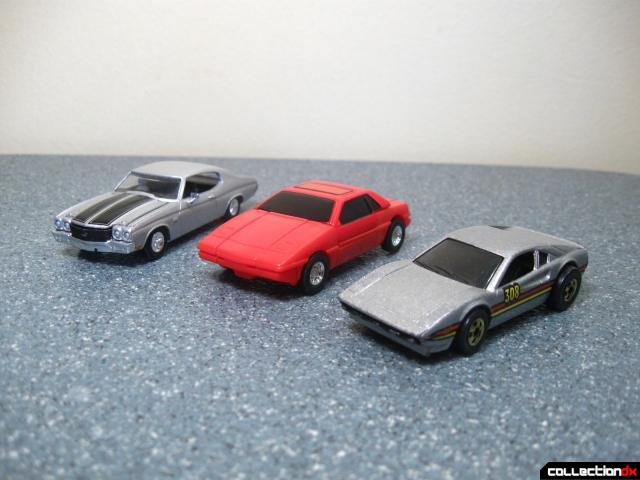 And again is quite inconspicuous among similarly sized toy cars. Truly a robot in disguise. 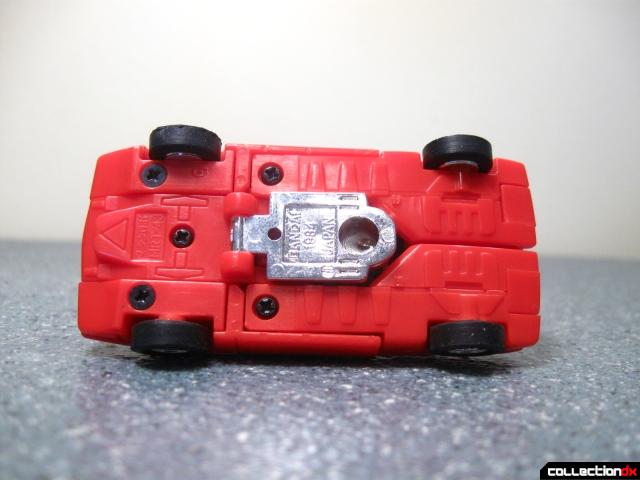 Sparky even has a really clean underside. The only hint of the transformation to come is the out of place chromed plate. 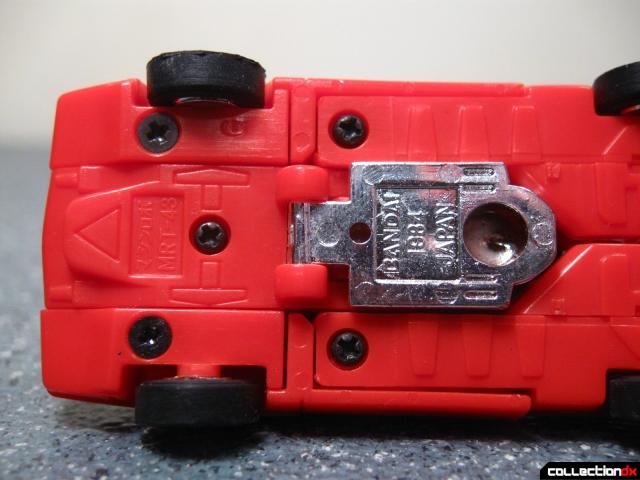 Taking a closer look we can see the Bandai copyright markings on the chromed piece and the MRT-43 designation near the underside of the front bumper. The "T" is said to stands for "Tonka" as Sparky was one of handful of figures that was not originally part of the Machine Robo line. 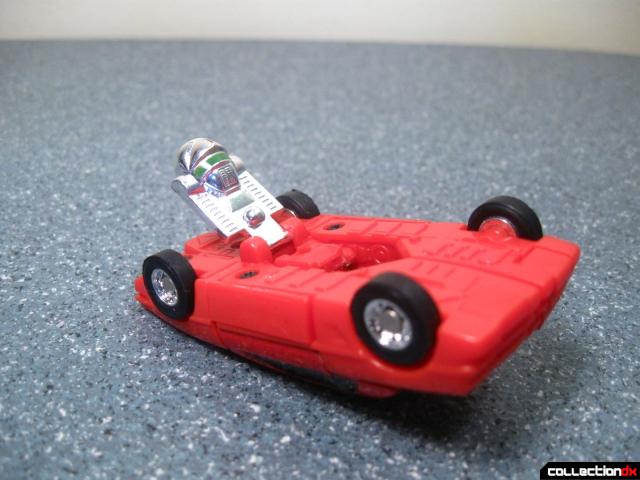 First the chromed plate on the underside is flipped up to form Sparky's head. 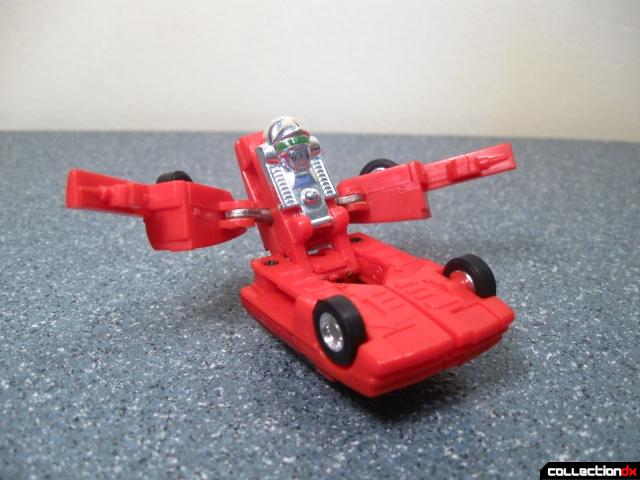 Next the front sides of the car mode are pulled outward to form the arms. The remaining front portion of the car starts to transition forward in an arc. 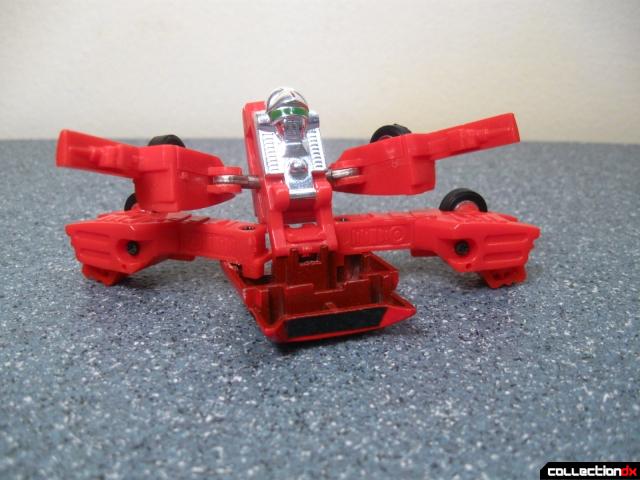 The rear sides of the car are swing outward to form Sparky's legs with small feet flipping to finish off the robot mode. Note the small molded in piston detailing on the sides of the legs. 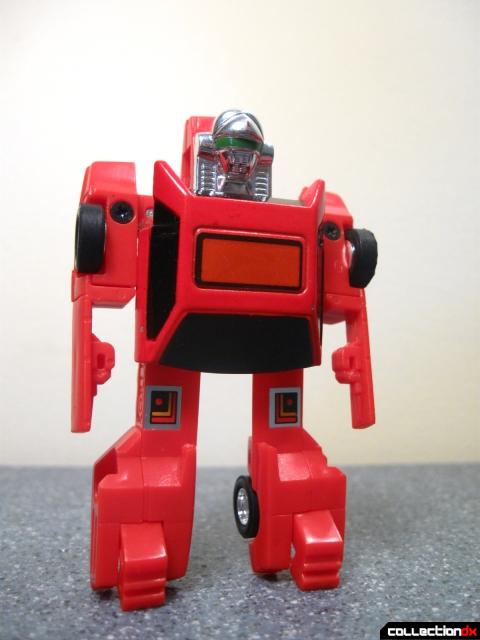 Given the rather novel way Sparky transforms, it's no surprise the resulting robot mode is a little different than the usual Gobot fare. I must admit I could never figure out her transformation before I owned the toy. In fact even as a child I thought it was so odd that Sparky had wheels on the insides of her legs while most other Gobots had them on the outside. Overall her robot mode is a lot larger than you'd expect given the size of the car mode. She's a good looking simple and stocky Gobot. 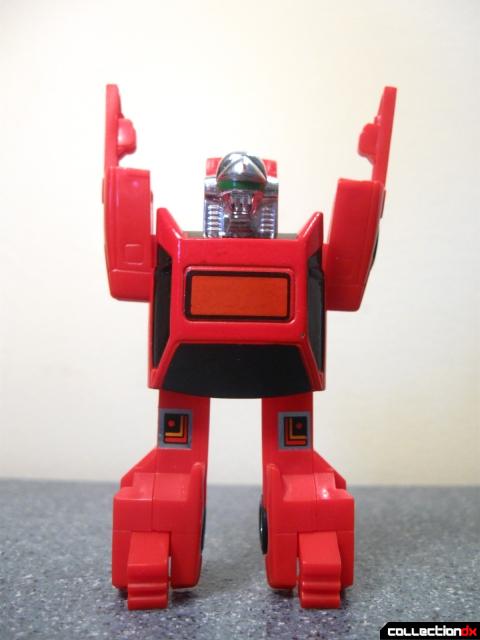 And if you raise her arms up she looks like a big red "H." 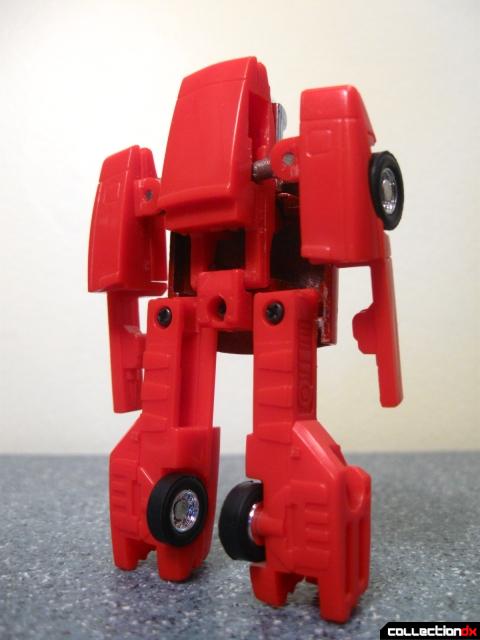 I find that even looking at the rear of the robot mode, it's hard to figure out where everything came from in car mode. 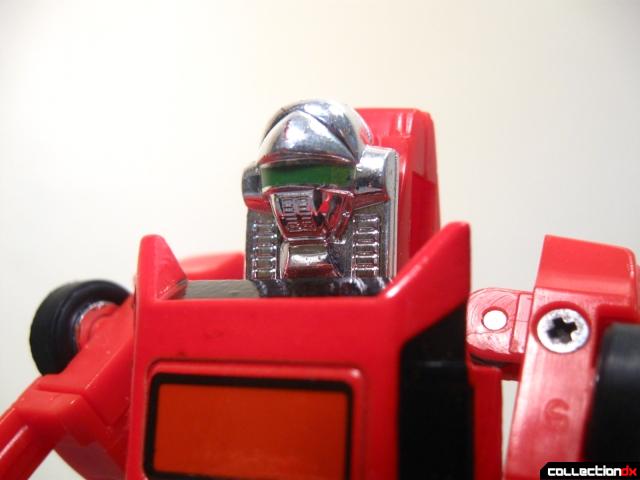 I imagine designers at Bandai probably didn't know or care that the toy was going to represent a female character so Sparky looks a little different than in the cartoon. In fact her toy has one of the least human looking faces with a nondescript vent for a mouth and an inhuman visor for eyes. The face on the toy looks like a robot from the cover of a pulp sci-fi novel. Be wary that the chrome on the face is often scuffed up by years of wear on loose figures. 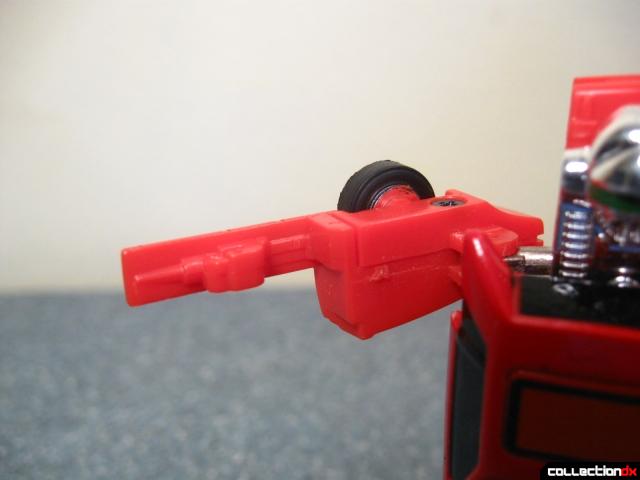 Another nice detail to Sparky is what appear to be small guns mounted just in front of her fists. Since so few Gobot toys had actual weapons, the animators at Hanna Barbera would simply show characters fire laser blasts from their fists. This design quirk on Sparky is an interesting bit of synergy between the typical cartoon episode and the toys. 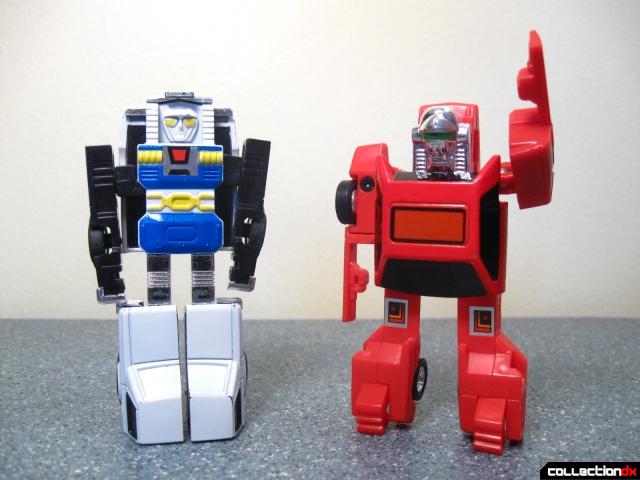 Sparky has a leg up (or in this case arm up) on some other Gobots with the articulation in her shoulders. A combination of a ball-joint connected to a swivel lets her arms go all the way around. Her arms also tend to stay a little bit tighter than on other simpler figure like Hans Cuff. 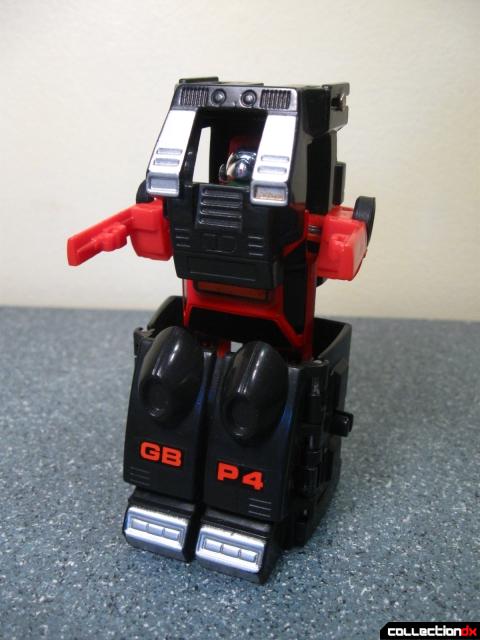 "This thing is broken! I can't see where I'm going!"

You can even stick Sparky inside one of the Gobots Power Suits. Due to her squat frame she might look a little weird depending on which suit you place her inside. 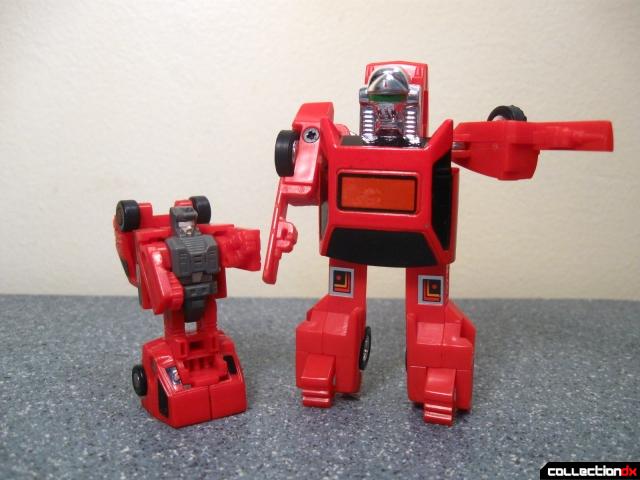 Here's a little shout out to Prometheum5 and his favorite couple.

Sparky was a figure I always wanted to own but hadn't gotten around to buying until I recently got bit by the Gobot bug (Gobug?) and started buying a bunch of figures off of eBay. Her unique transformation and somewhat atypical robot made make Sparky a standout figure among the line. She has great build quality and is an excellent transformable toy.

Nice review! I always liked the unique (and sometimes bizarre) ways some of the GoBot transformations worked, Sparky being a perfect example. She was one that I also missed until years later on eBay.