Even in the harsh jungles of Kumen, Votoms still has room for fanciful ideas such as an ace pilot with a custom paint scheme. The mysterious Ypsilon tears up the jungle in his custom ATH-14-WPC Snapping Turtle, which is distinguished from the regular grunts by its striking deep blue and white color scheme.

This Snapping Turtle is part of the same series of toys at the Diving Beetle I also reviewed. Toys from this line are made from a combination of ABS plastic and diecast metal. 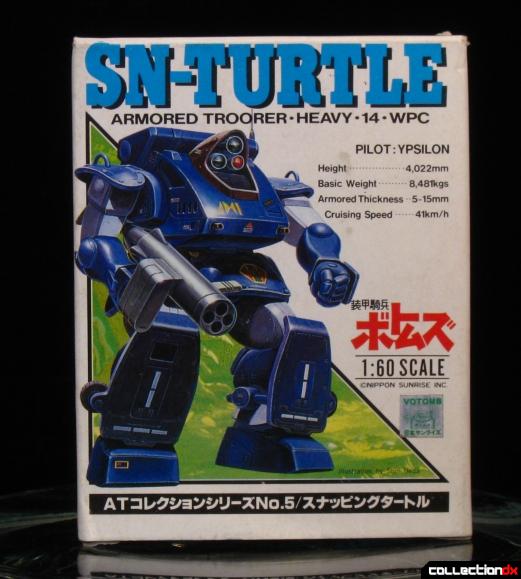 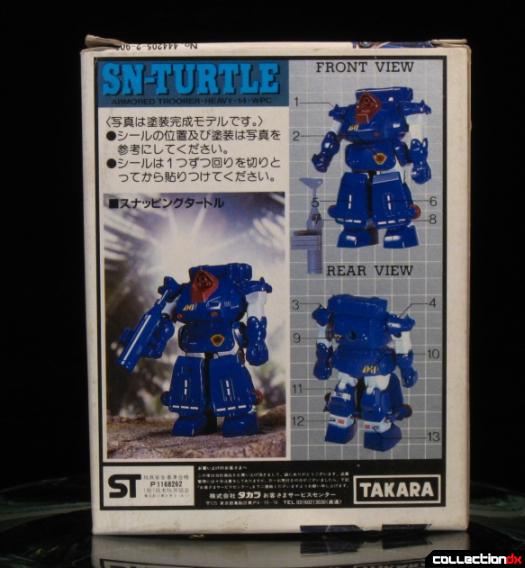 The back functions as a combination sticker and painting guide.

One side features a short bio on the mysterious (and pretty) Ypsilon and the crazy English Votoms logo.

The other side shows off two very different explanations of the "VOTOMS" acronym. 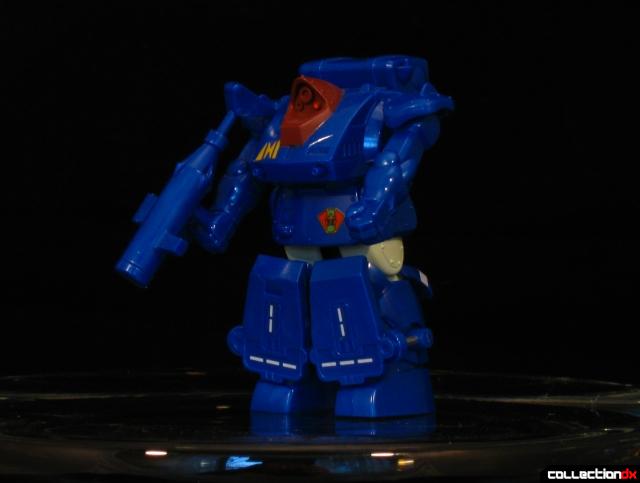 The toy itself is made primarily of blue plastic with a little diecast in the chest. It has far less diecast than the Diving Beetle. 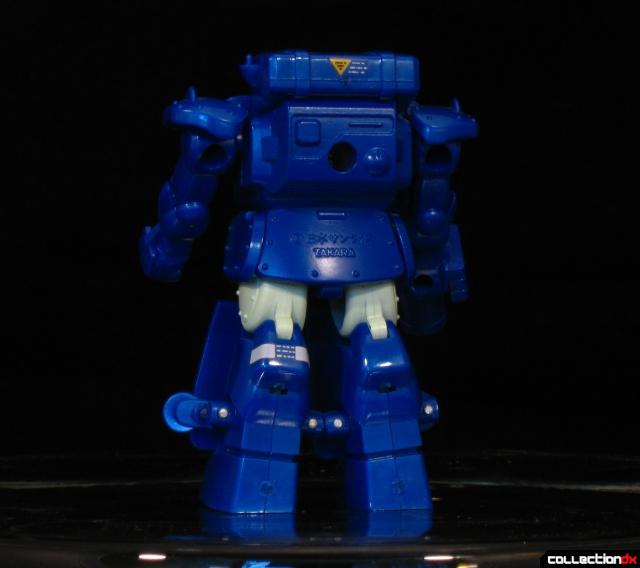 The toy comes with a few stickers which help liven up the bare blue surface of the toy. 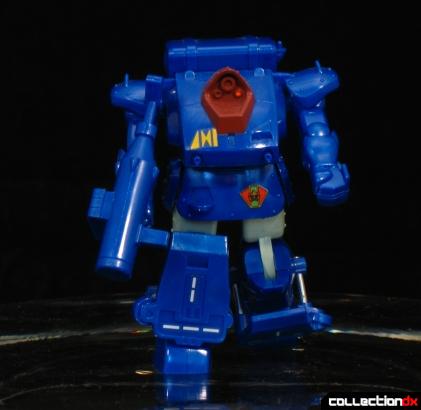 Unlike the Diving Beetle, the Snapping Turtle dares to have some useful articulation. A pair of knee joints let this old toy achieve a fairly convincing walking pose. 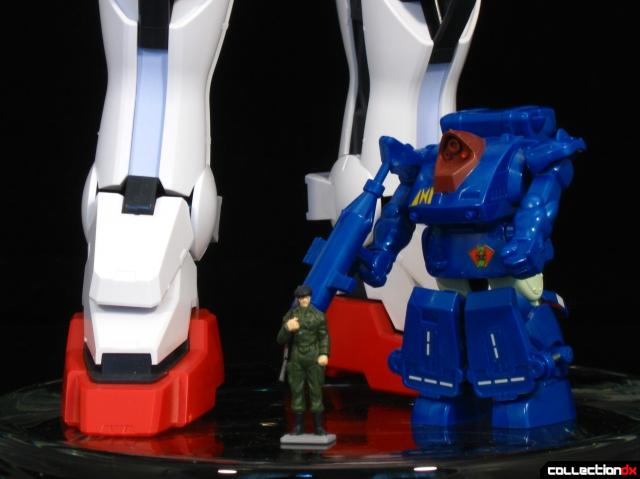 The recent smattering of 1:60 scale toys has made me into a bit of a scale nut. Together with the 1:60 Exia and a figure from the Destroid Defender I can make my Snapping Turtle stand tall at the feet of giants.

It's actually very interesting to look at these things, because you get a sense of how ridiculously huge Gundam mechs are. I think that maybe Tomino didn't quite know how long a "meter" was...

It was actually the sponsors at Clover who wanted a larger robot. They wanted 50 meters so in the end Tomino compromised at 20 meters.

They're the aquatic-use geared version of standard VOTOM land roller systems. This type works on land, but they work much better when submersed. Normal terrain types are the opposite, and don't work too well in the swampy/river environment that the arc they appear in takes place in. Which is why Chirico had to end up using a Marshydog instead of a Scopedog while on Kummen.

they let it go vroom vroom

IN water, actually. Unless I'm having some major, unnoticed strokes, and I've lost the portion of my memory pertaining to VOTOMS.

The thing you use to post these messages is attached to the internet.

Why don't you try google.

Well, at first, I didn't know what they were. No help there.

Then I searched "VOTOMS water", "VOTOMS battle", "VOTOMS fight", and "VOTOMS underwater". And all I get is the opening credits more-or-less each time.

I need to refine my search a little more, and then I'll have it.

Try searching for Votoms rollerskates. Because that's basically the idea.

In case anyone doesn't know, Dream Pod 9's "Heavy Gear" basically uses VOTOMS mechs as its central characters. I think someone described it as "the mecha from Votoms in the world from Dougram".

I definitely love the striking illustrations & text designs Shin Ueda had put into the box art of this toy. Ueda must've been influenced by the American pulp-style comics that was standarzied from the 1930s to 1950s.

It would've been interesting if he made a pulp American style Votoms mini-manga that came with the toy.