The Zybots are one of the lesser known toy lines to come out of the 80s transforming robot craze. Lacking the design pedigree of more well known brands like, Transformers or Gobots, these little toys by Remco are doomed to walk the Earth as those unknown toys in the assorted lots you see on eBay. After taking a look at the Zybots Tractor-Trailer (who I recently found out is named, "Trac"), I made a mental note to keep an eye out for some of the other entries in this humble henkei robo team. Thanks to fellow CDX reviewer Nekrodave, I got my hands on the line's requisite transforming aircraft. So let's dive in and look at the Zybots F-16 Fighter Plane that transforms into the robot called Mach 1. 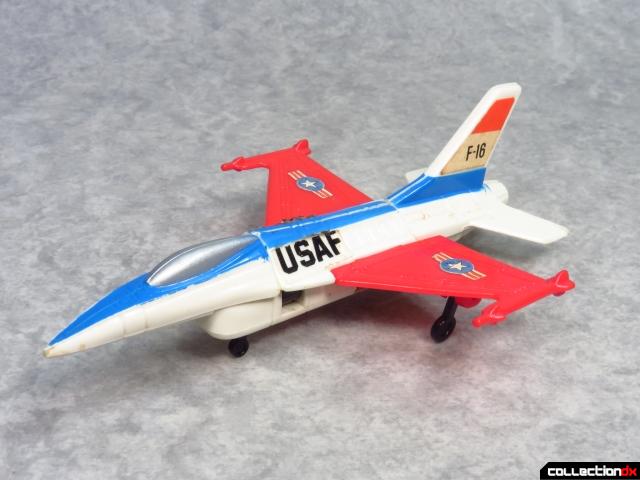 Mach 1's vehicle mode is an all-plastic rendition of the F-16 Fighting Falcon. He measures a little under 4 inches in length from tip to tail. 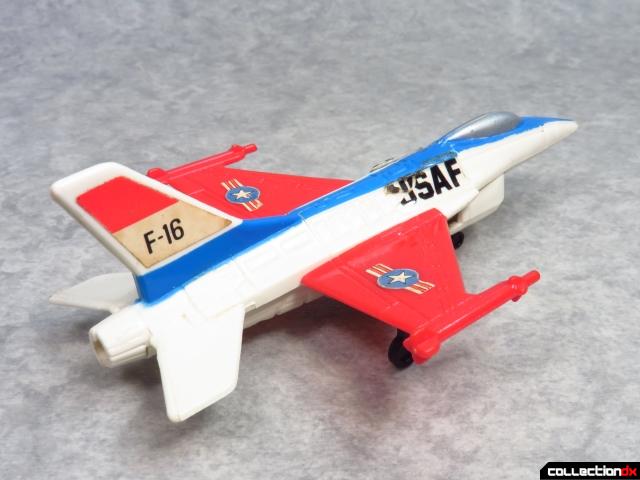 The toy's patriotic color scheme is based on the real life YF-16 prototypes, which is a cool thing to see on such a low cost toy. It looks like someone at Remco must have been a bit of an aviation enthusiast. 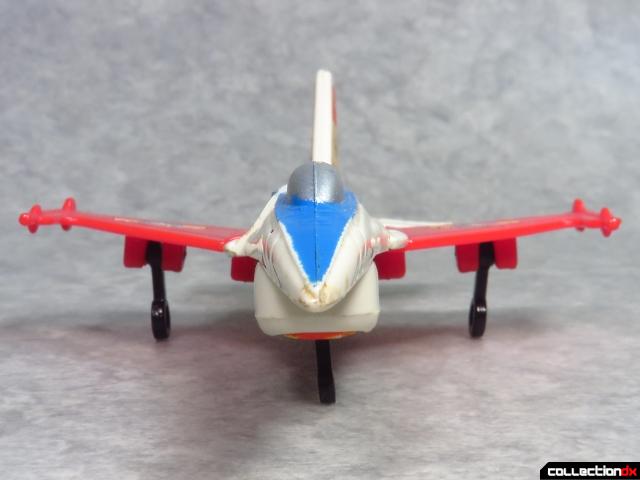 Mach 1's front profile is amazingly sleek, even if his wings are drooping a bit due to age. A full set of retractable landing gear gives the Zybot the quiet dignity of a plane on the tarmac. 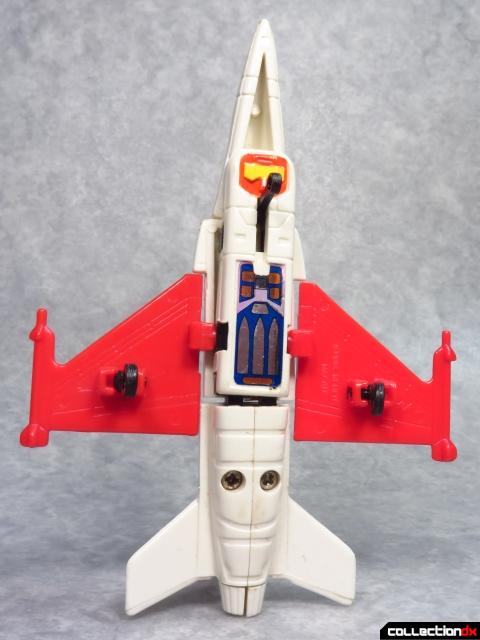 From below, things get a little less graceful, as a big chunk of Mach 1's robot mode is etched into the ventral air intake of the F-16. 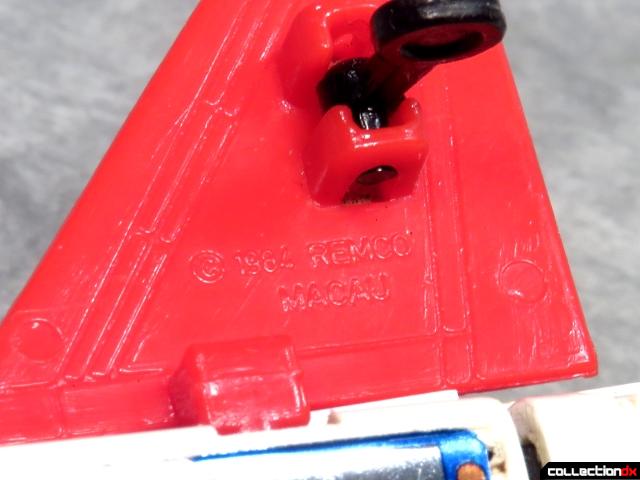 On the underside of the left wing is the authentic © 1984 REMCO MACAU production stamp, noting when and where the toy was manufactured.

Now, because the joints on this Mach 1 have gotten loose with age, I'm going to call in a pinch hitter for the next set of photos. What you are about to see is one of the toys I got while hanging out with Josh at the "The New England Transformers Collectors Club Meet and Greet" at the Comicazi comic book shop. 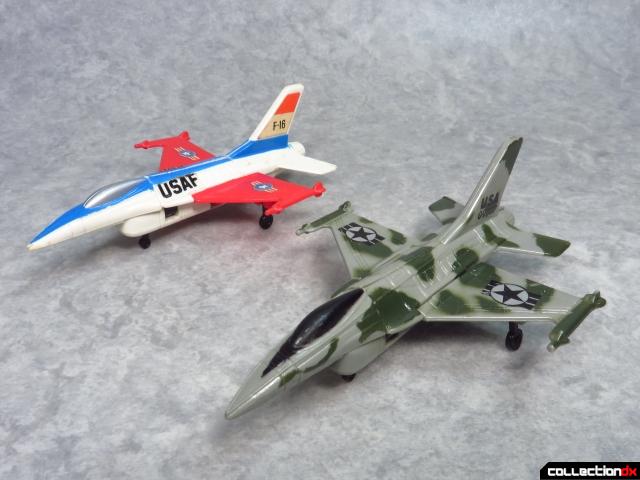 And so, here is what I like to call the "Aggressor Type" version of Mach 1. 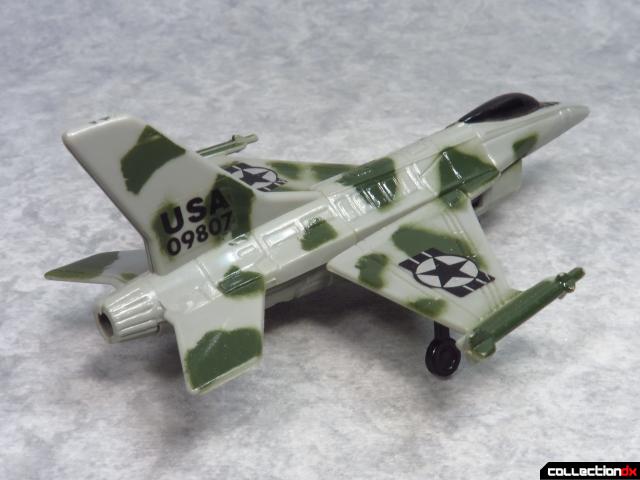 It is the exact same toy, but done up on a camouflage pattern that might be emulating the markings used by the opposing force during training. Members of an aggressor squadron fly airplanes painted up to resemble airplanes used by hostile nations, so an American F-16 in this type of camo is something you would see in real life. 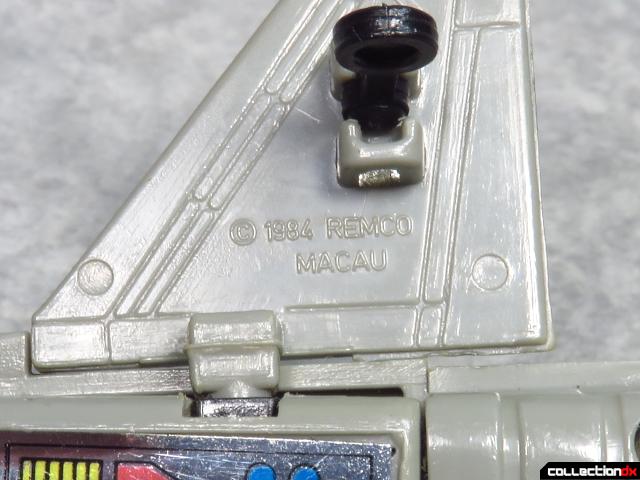 This is the first time I have ever seen this variant of Mach 1, but since it has all the proper markings under its wing, I assume this is a legitimate Remco release and not a bootleg. 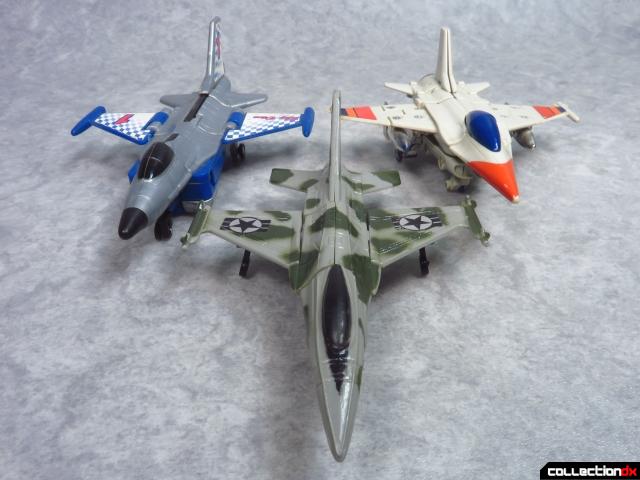 And while a lack of diecast makes the Zybots F-16 seem a little "cheap" in comparison to other contemporary transforming Fighting Falcons, the toy easily holds its own in the looks department. Here is Mach 1 along with Aerialbot Sky Dive (G2 version) and Gobots Heatseeker (aka Falcon Robo). 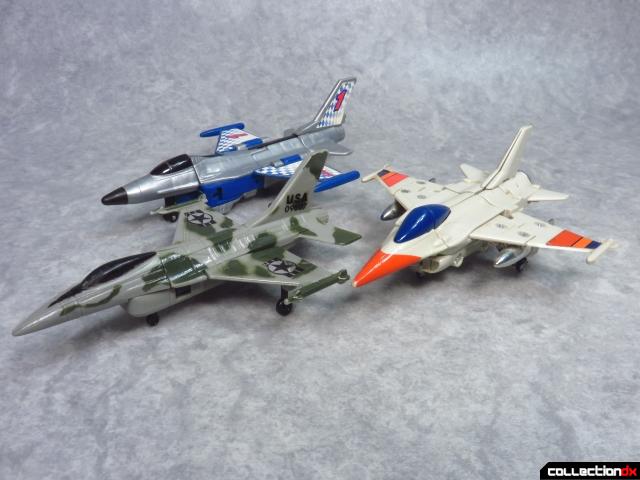 Mach 1 is easily the sleekest and most accurate of the three, and could be easily mistaken for a regular toy jet (so long as you don't look at the robot face on its underside). However, that level of fidelity to the real life aircraft comes with a cost that we will soon see. For now, let's just enjoy some shots of the old Remco toy on a modern display stand. 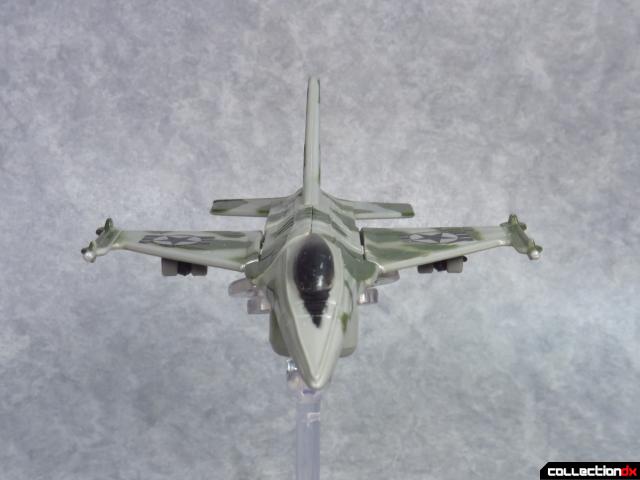 The landing gear can retract for a more streamlined look in flight. 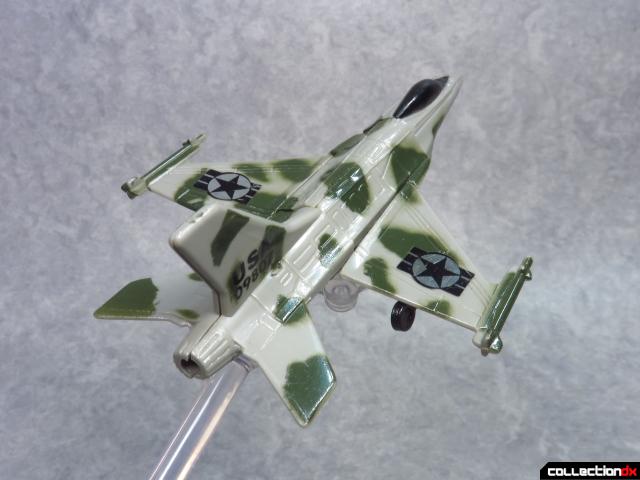 Unfortunately, the rear wheels stick out a bit from under the wings, but what are ya gonna do? This toy costs like four bucks. 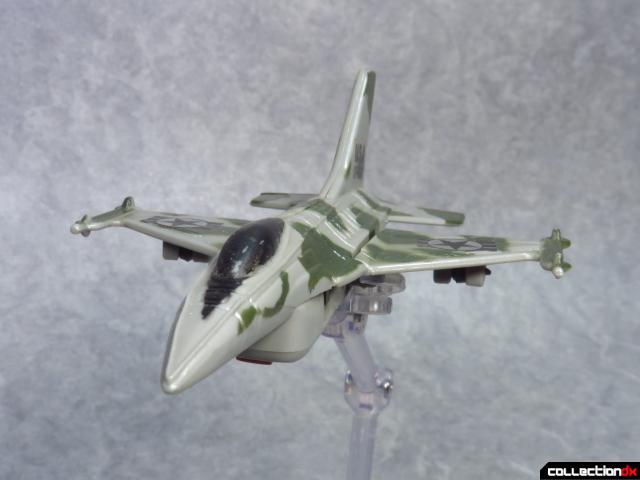 Let's just bask in the small amount of glory Mach 1 achieves in jet mode, before things get a little "iffy" in robot mode. 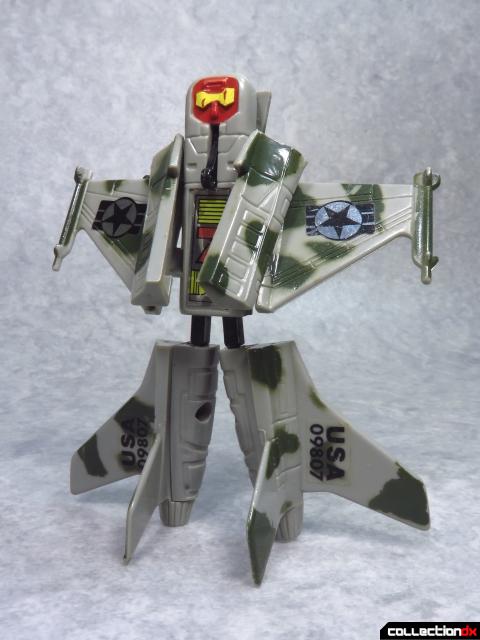 You know, I think what I like most about Zybots is that someone at Remco was clearly trying to make something good, but was held ba ck by a number of limitations. Mach 1's robot mode is terrible, but it's a charming kind of terrible. This is more or less an F-16 carved up into some bits that sorta resemble a humanoid robot. There really isn't much to this transformation, but it still manages to be a bit clunky. Honestly, it reminds me a lot of the Generation 1 Decepticon jet toys, which - let's be honest here - were also pretty inelegant toys. Mach 1 even shares the same wing configuration as the Decepticon jets, and tries to get away with the same "use chunks of the jet's backside as arms" trick. 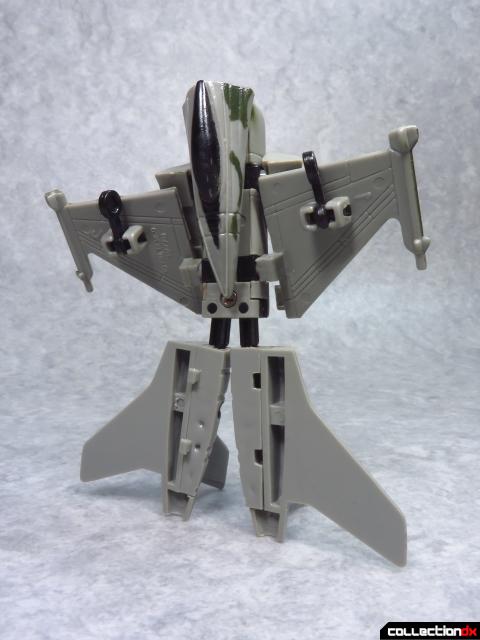 Getting the toy's arms out is an awkward affair, since you have to position both his wings and airplane nose block in certain ways just to give Mach 1's limbs enough clearance to swing out and around. His legs extend and angle slightly at the hips, giving the toy a barely noticeable A-stance. Also, be careful when rotating the plane halves that become Mach 1's legs, as they like to pop off the tiny cross-shaped peg they move on. 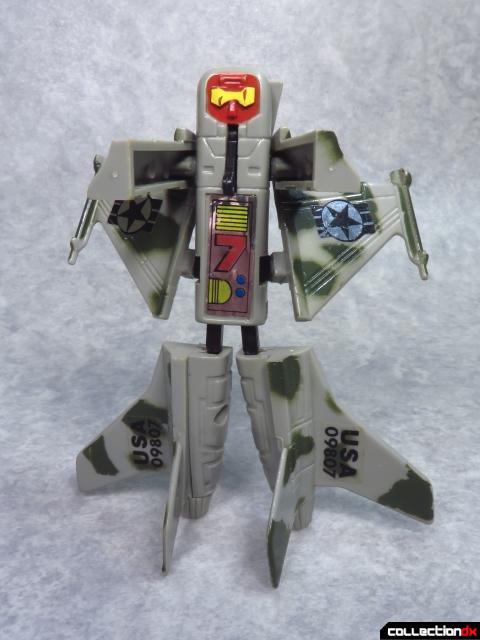 The only major difference between the Zybot and Starscream's gang is that Mach 1 doesn't have a pair of boxing gloves to shove onto his hand-less airplane slabs. 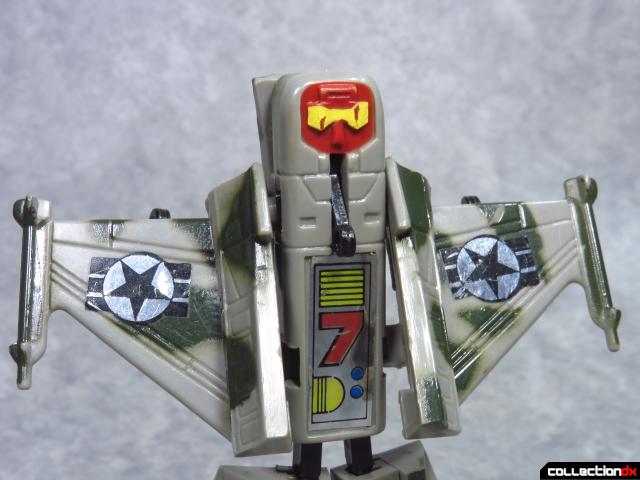 Like fellow Zybot, Trac, Mach 1's head consists of a minimalist robot face. Just a pair of yellow goggles, straddling what looks like a nose, is all we have to go on. My copy also looks a bit derpy thanks to some unfortunate paint scrapes on the visor. I do appreciate that the camouflaged version of Mach 1 has an entirely different chest sticker than the other one. The numbered belly plate is giving me some Daitetsujin 17 vibes. 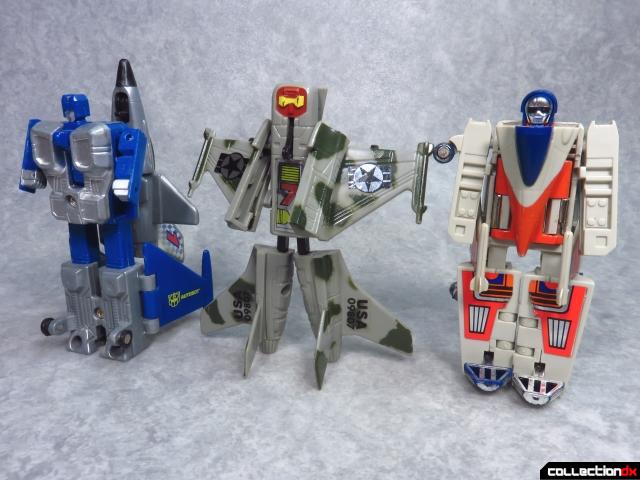 When placed in between Sky Dive and Heatseeker, poor Mach 1 looks like someone's attempt at a scarecrow made out of junk from an airplane graveyard. Out of these three, the Gobot is the clear winner since he actually does an amazing job of balancing plane and robot mode, while the Aerialbot is just your typical Transformers Combiner limb with a jet (albeit a cute one) on his back. 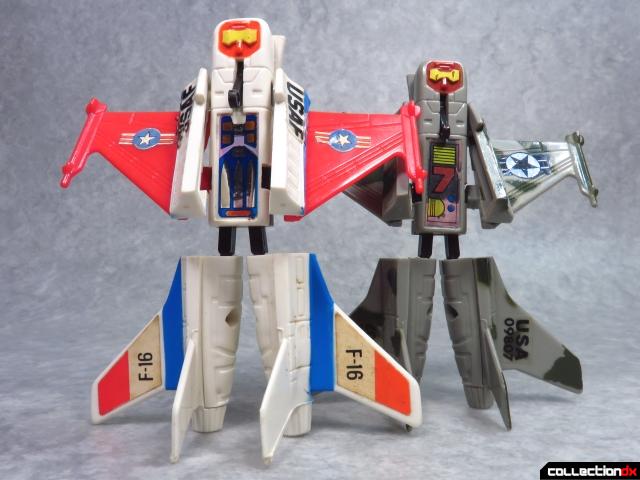 And here are the two versions of the Zybots F-16 Fighter jet side-by-side in robot mode. While they are far from the most impressive things on two plastic legs, I can't helped but feel sympathetic towards them. 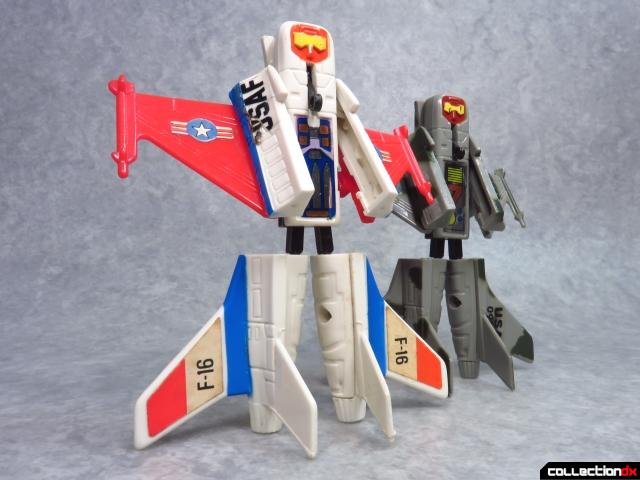 I feel like Megatron in that "Robot Chicken" sketch - these guys need a pat on the head and something to call a victory to lift their spirits. Maybe I'm just being moé for cheap robot toys... 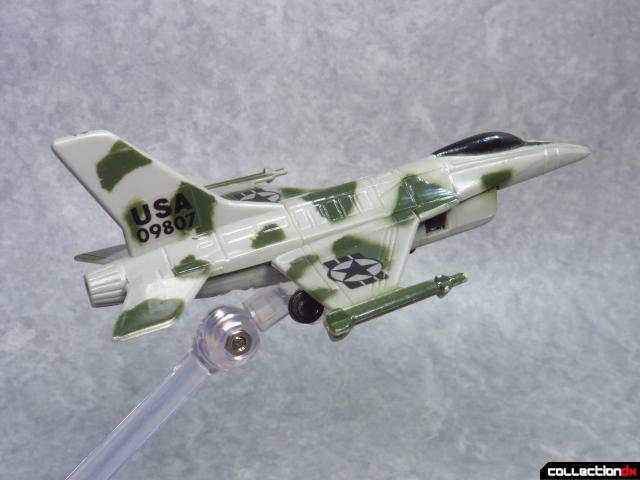 All in all, Zybots Mach 1 is just another footnote in the vast history of transforming robot toys. The figure is in no way a hidden gem or an unappreciated masterpiece, it's just a cheap piece of plastic that tried to cash in on a fad. Still, there is something about its inherent awkwardness that makes it all the more appealing.

And at the very least, Mach 1 reminds of the good times I've had with good ol' Louis Gossett, Jr.

I love strange little toys like this. They remind me of what toys are actually about. When you are a kid, articulation and even balanced proportions mean much less than your own imagination. Every toy, no matter how "bad" it is, was some kid's favorite, even if just for a day or two when it was new. Thanks for the review!