Hey all you van fans out there! Vanity Veef here, welcoming all you guys and gals to another eye-opening review of a crazy kooky old robot toy!

Alright, enough of that van-jive, let's get down to business. So of you may remember my review of the Convert-A-Bots Car, which ended up being an even more off-brand release of the Toyota Soarer Robo-Car by Mark. Well it just so happens that I found another Convert-A-Bot while perusing Mr. Ginrai's Gobots bin at the recent Chogokin Summit. Get ready for a real supervan! 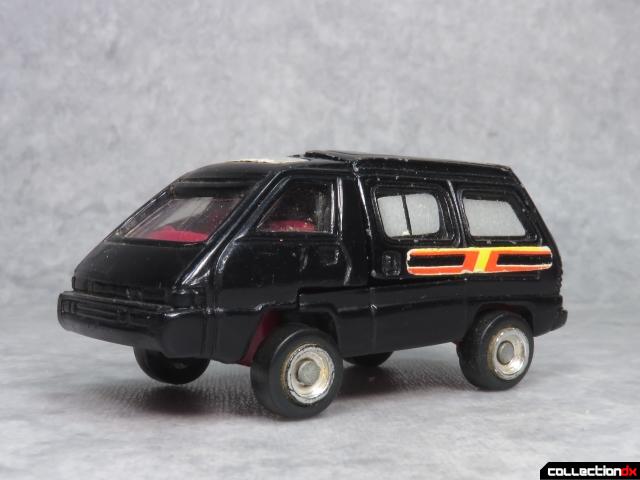 The Convert-A-Bots Van came out a little after the more familiar Converters Mini-Bot version. Like its kin, this Van is a roughly two and a half inch long diecast vehicle with rubber tires. 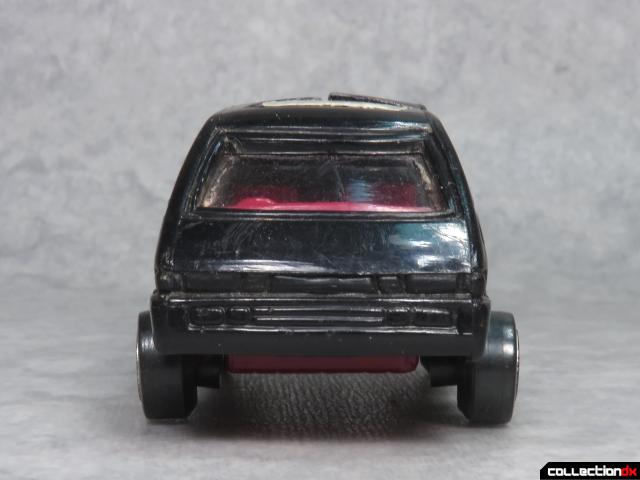 The toy was originally known as the Robo Car "Ace Robo," and transforms into a Nissan Cherry Vanette. Transformers fans may recognize this humble family roadster, since it's the same vehicle mode as Ratchet and Ironhide. 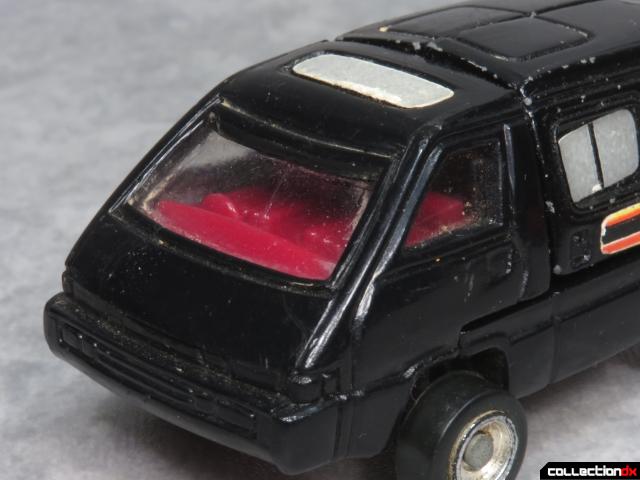 One cool thing about Mark's Robo Cars is how that they all have clear front windows and a basic interior sculpted inside. 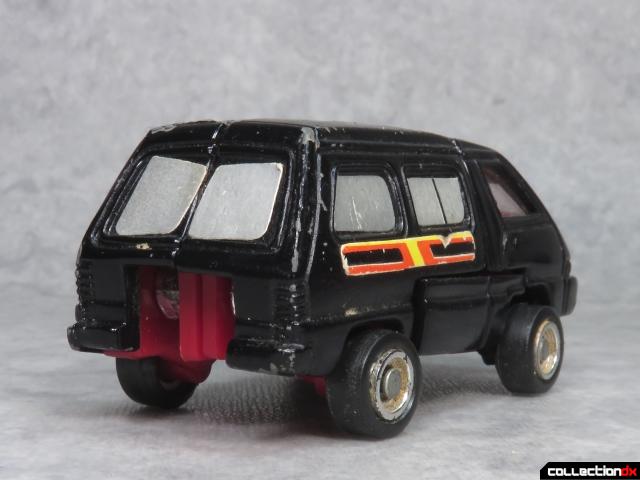 Unfortunately, the rest of the windows are just stickers, and it appears the rear windshield ones weren't applied properly on this toy. 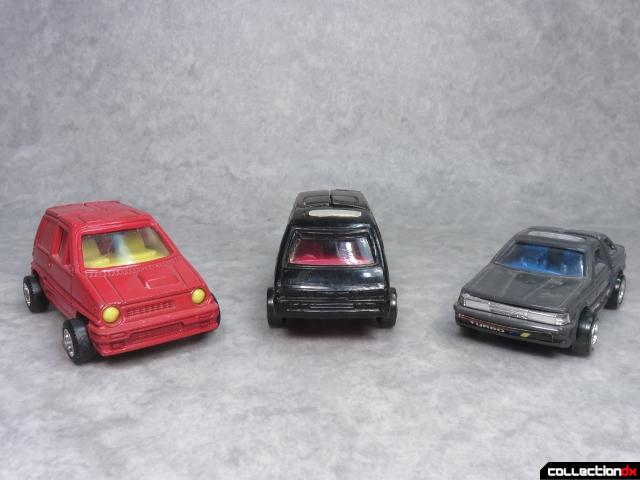 Van fits in quite well with its Robo Car brethren. On the right is a Converters City, and on the left is the aforementioned Convert-A-Bots Car. 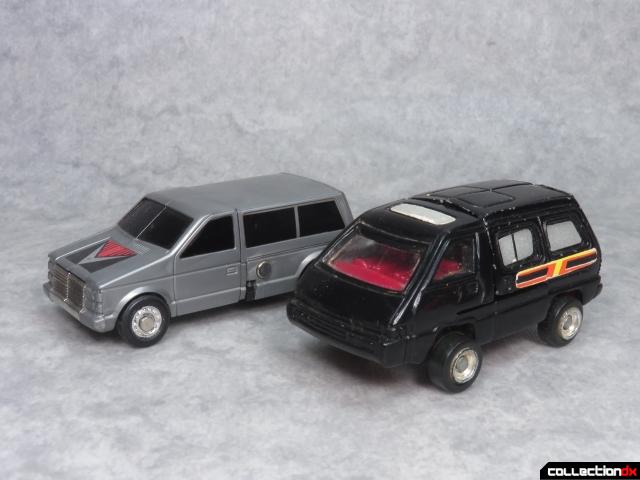 And I would be remiss not to mention how well Van fits in with similar 80's transforming vehicles, like Gobot Van Guard. For a lot of children, these were all the same kind of toy regardless of their origin. 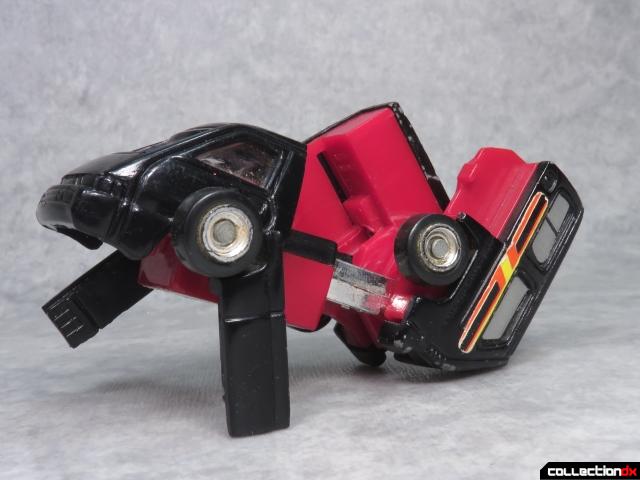 Transforming Van into robot mode is a typical Japanese 80's henkei affair, with the sides of the vehicle pulling out to become arms, while the rear half unfolds into legs. 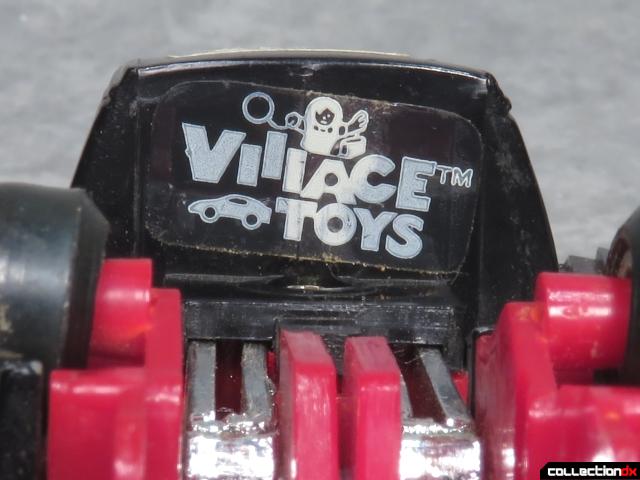 Along the way, we get to admire the ominous looking "VILLAGE TOYS" logo that serves as the maker's mark for Convert-A-Bots. 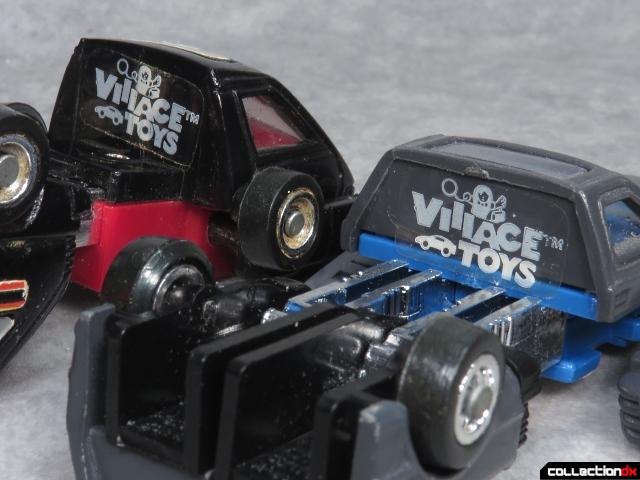 Both Van and Car have this branding. Also, I assure you that it does not say "VIIIACE TOYS." 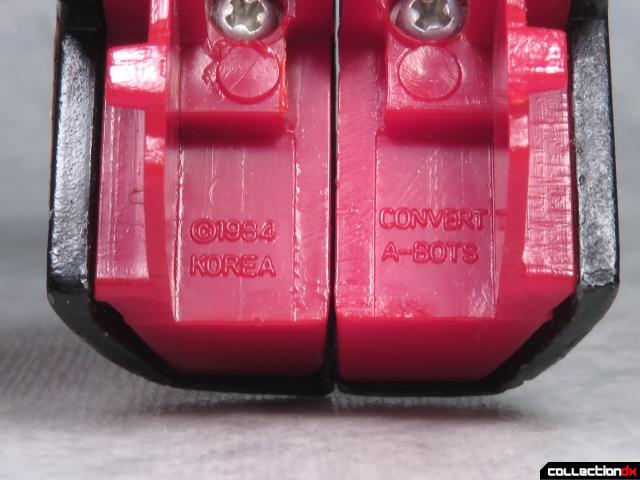 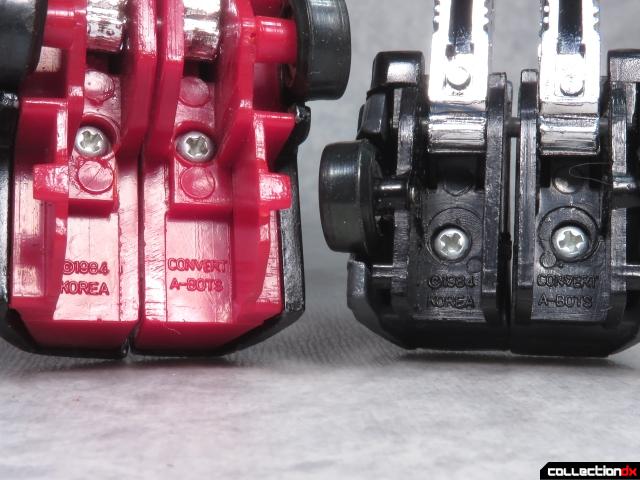 Here are the manufacturer's marks on Van and Car. 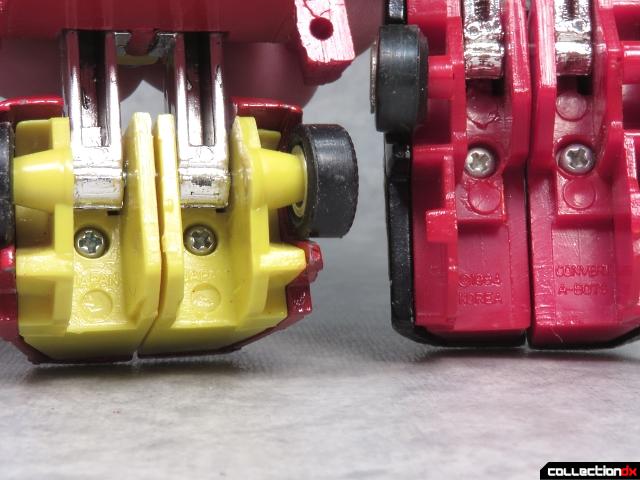 By contrast, Converters just have a pair of "Japan" stamps, which seems to indicate that they were produced in the same factories as Mark's Robo Car toys. 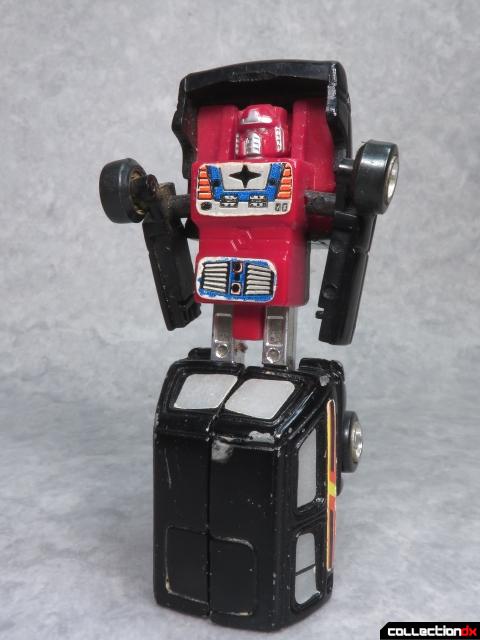 Van unfolds into a competent little toy robot that stands three and a half inches tall. 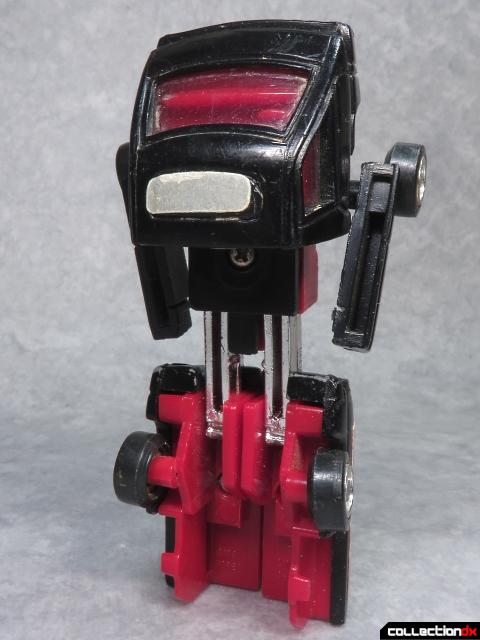 The toy has a tendency to tumble backwards due its lack of solid heels. 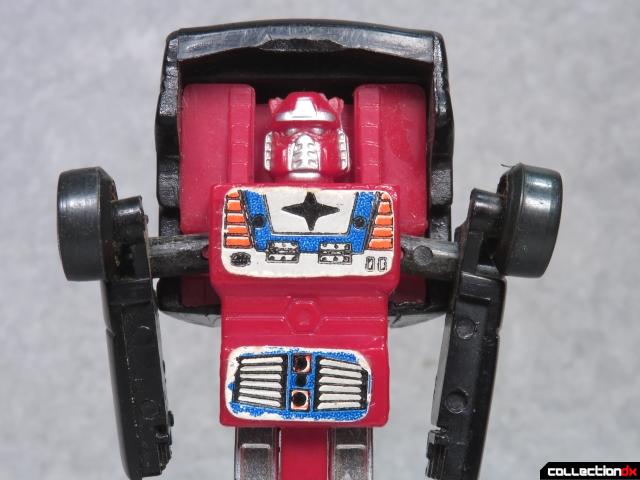 Van's head design appears to be a cross between the RX-78 Gundam and Don Hakka from Starzinger. Silver paint brings out all the appropriate details, and gives the toy a charming low-budget finish. The body stickers provide a generic 80's robot feel, but, for whatever reason, Van sports a pair of door hinges in its chest plate design. 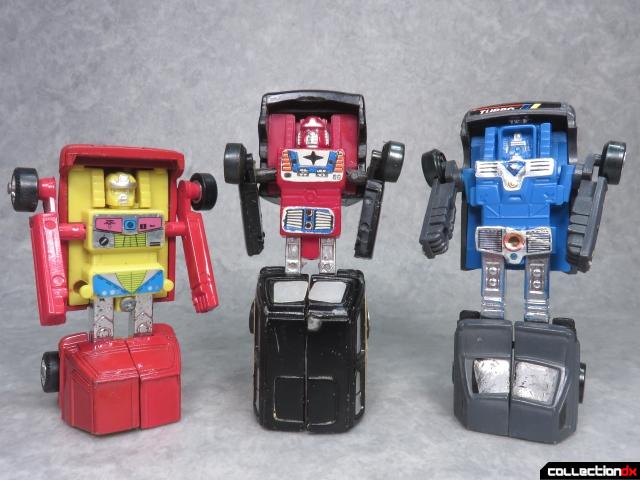 Here is Van with Converters City and Convert-A-Bots Car. The three toys display the fairly consistent Robo Car aesthetic, which helps differentiate them from the other transforming robots they tried to emulate. 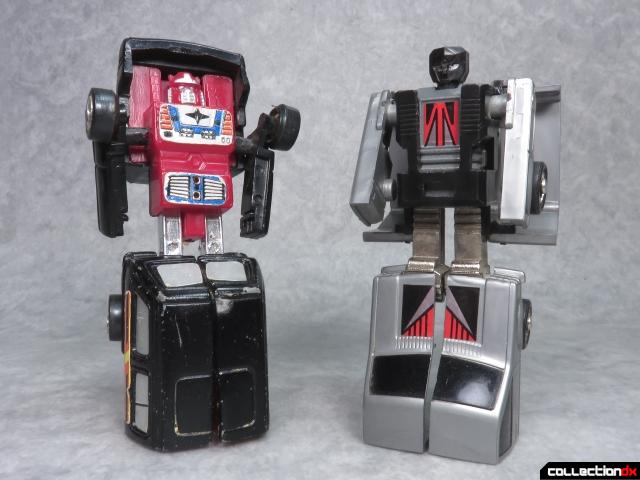 Although, that design style is close enough to make a Robo Car easily mistakable for a more mainstream Gobot figure, such as Van Guard. 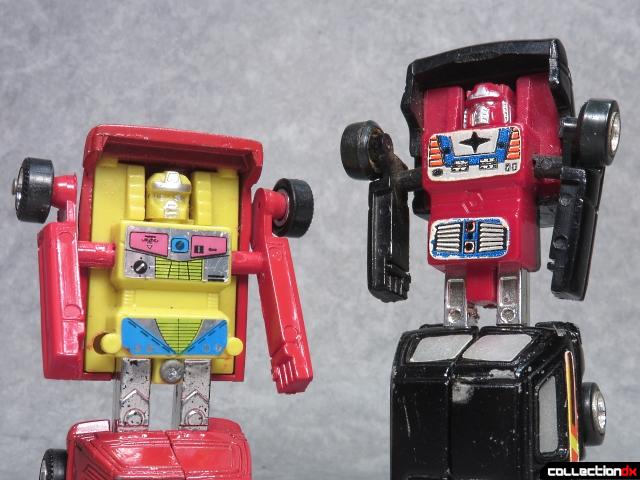 And while there was never a show based on these toys, pairing up City and Van gives them a bit of a Laurel and Hardy vibe.

The Convert-A-Bots Van isn't the most interesting toy on its own, but the story behind it provides a cool look into the highly competitive world of 80's robot toys.

Until next time, Vanners, keep on ridin' high...