It is odd to note that when Japanese model kit firm Arii was licensed to produce model kits for the 1982 series Super Dimension Space Fortress Macross that the worst scaled kits in the line would be the flagship vehicles of the show, The Valkyrie Fighters, Battroid and Gerwalk variations.

Looking back all these years it’s good to note that most of the other kits produced by Arii of their 1/100 Macross model line still hold up quite well. Good examples are the Destroids and Regult battle pod lines, one of which I should have finished for a review shortly. 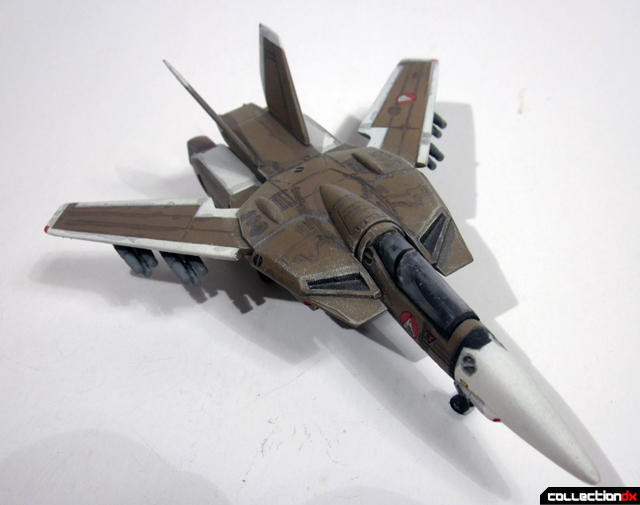 The Valkyrie kits on the other hand were badly executed when it came to Arii designing, engineering and manufacturing them. First I would like to talk about the issues of scale.

Most model airplanes plastic model kits are usually manufactured in four scales: 1/144, 1/72, 1/48, and 1/32. 1/144 is considered the airliner scale, as most all airline model kits would be much too large to fit on a shelf if they were produced in a larger scale. The second scale 1/72 is considered an international or standard scale as most all manufacturers worldwide still produce kits of this size. It is a great scale as it is just large enough to produce a decent scale kit of a small WWII airplane but just small enough to produce a large bomber kit such as Monogram’s B-36 Peacemaker kit.

I/48 and 1/32 are great scales for large high detailed kits and it is a good scale to mix armor and airplane kits with for same scale diorama scenes. Yes there are other scales but these four are the most popular in aviation plastic modeling. 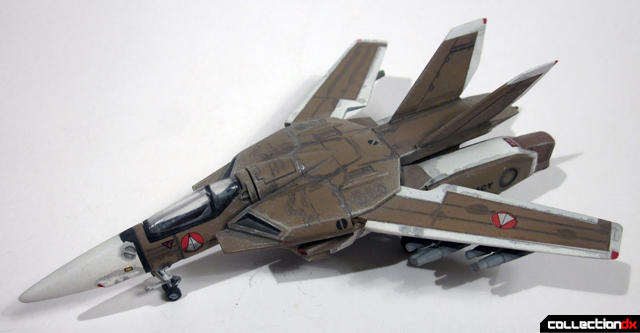 One scale that has seemed to have died in military modeling is 1/100 scale. In the 60’s and 70’s there were quite a few companies producing 1/100 scale model kits, but over the last couple of decades 1/100 scale has seemed to disappear from the model shelves for aviation modeling. The huge exception of course is if you build anime robot model kits.

Most Gundam model kits are produced in 1/144 and 1/100 scale and those two scales are the most popular in anime robot modeling, with 1/100 scale being reserved for Gundam High Grade model kits. I personally build model airplanes in 1/72 scale and having these Arii Valkyrie kits produced in such a small scale that is out of scale with all my other airplane model kits, the VF-1A just does not look right sitting on the shelf next to my other airplanes. Is it really not too much to ask to produce a 1/72 scale or even a 1/48 or 1/32 scale Valkyrie kit? The Grumman F-14 Tomcat, which is slightly larger than a Valkyrie, has been produced in 1/48 and even 1/32 scale by a few manufactures. So I ask, “When is our large scale Valkyrie model kit going to be produced?”

The VF-1A was the standard and most numerous fighters in the Macross TV show. Usually they were the cannon fodder in the series and most of the pilots on Macross seemed to have started with the VF-1A. 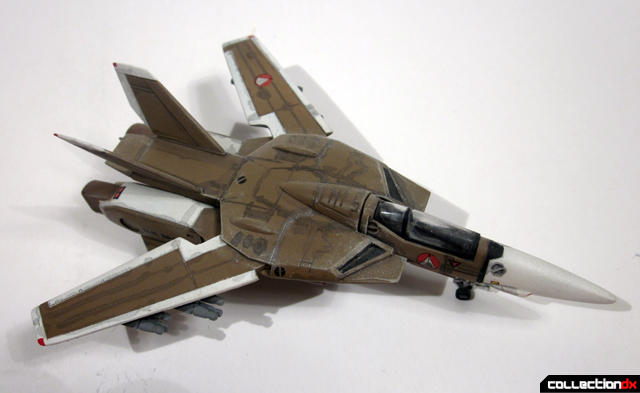 One positive note that I can say about all the Arii’s Macross model kit line all the box artwork and art design are top notch and their VF-1A model kit is no exception with a beautiful oil painting of the subject in flight with a blue universe background and fighter performance stats. Typical of Japanese anime kits of this era there is no picture of the actual model kit on the box.

The kit comes with three white sprue, one clear window, one sheet of decals and a paper insert advertising other model kits within the Macross model kit line. One sprue is just the front of the aircraft and the Battroid head, just so that Arii can produce many kits of the same subject but just replace the head with one small sprue. The markings are of the standard VF-1A paint scheme of military brown and flat white. The airplane can be built in either flight mode on a beautiful UN Spacy marked stand or with the landing gear down. The model also has an option of building the kit with four sets of missiles to be placed under the wing.

The kit is a great starter kit if you have not built any model kits before, as it is a simple build as the kit has only 38 parts and the instructions are quite simple to follow. Some pointers if you are going to building it will the landing gear down I would omit parts 8 and 9 as the landing doors are too large and the doors would have folded back after the landing gear came was released in the down position. Also take note although the wings can fold in and out the missiles do not turn with the wing so you should decide exactly how you want the wings positioned before you glue the missiles on.

If you are going to build it out of the box, one fault is the clear window is molded distorted and thick and is out of scale. If you have the ability it would be best to vacumform a new window with thinner clear material. Also there is sparse detail in the cockpit and landing well areas of the kit. 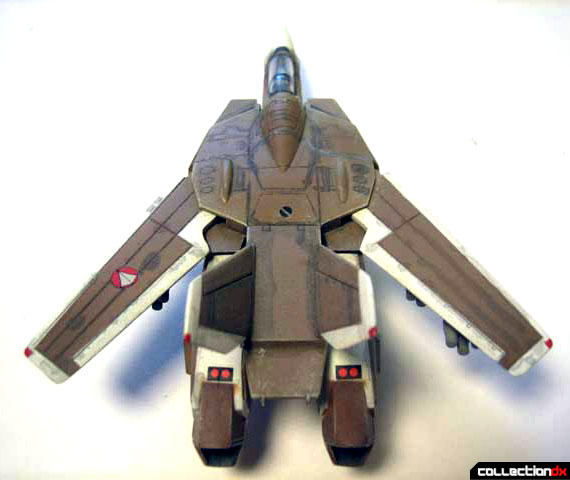 I painted my VF-1A with Testors Model Master Flat Military Brown and flat white, they appear to be a great match to the colors on the instruction sheet. The model was painted with a Badger 350 airbrush. After spraying a gloss coat I applied the decals, which were a bit thick but went on and set well with Microset and Microsol decal setter. After a flat coat to seal the paint I applied a thin wash of paint thinner and black paint although these days I do not apply washes that way (I use oil paint now). I built the kit around 11 years ago, and although I have lost a few pieces over the years it still looks nice.

Now lets talk about Arii scale issues with the entire kit and entire Valkyrie line. If this model kit were to transform it would look nothing like the Arii 1/100 scale Battroid. The body of the aircraft is too thin and long and the arms would be too long and small. The heads are too completely different sizes as well. The Battroid is shorter looking and stocky and the legs and arms are fat. The Gerwalk and fighter bodies are two different bodies. It seems there was no continuity in designing the Valkyrie series, which is too bad as the Valkyrie was the main icon of the series. But of the three the Valkyrie Fighter looks the best and still looks in proportion even though it is out of proportion.

Since these poor kits were manufactured a few other Valkyrie kits were produced. Soon after this kit was released one of the other Macross model kit licensee Imai would produce an excellent 1/72 scale Variable Valkyrie model kit that 20 years later still hold up beautifully. Also Arii will scale down the Imai molds to 1/100 scale and release their own variable Valkyrie kit that also still holds up well.

Most important and recently, the model industries most innovative and important model aviation manufacturer Hasagawa started producing Macross Valkyrie kits. Of what I have seen they look beautiful and better yet they are manufactured in 1/72! It appears the designer of the new Hasagawa Valkyrie kit approached the kit as if it was a real aircraft, something Arii should have done all those years ago. I am looking forward to building one these Hasagawa kits soon; their Strike Valkyrie Fighter is a beauty! 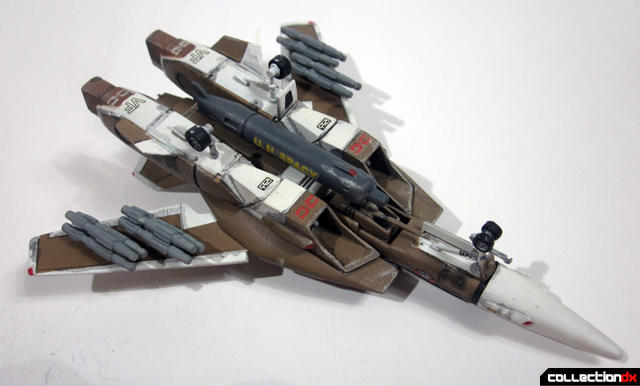 If you are a Macross toy or kit collector all the Arii kits are worth purchasing for their artwork and historical value. There are at least 50 model kits in the first year Arii releases alone, not to mention reissues and special 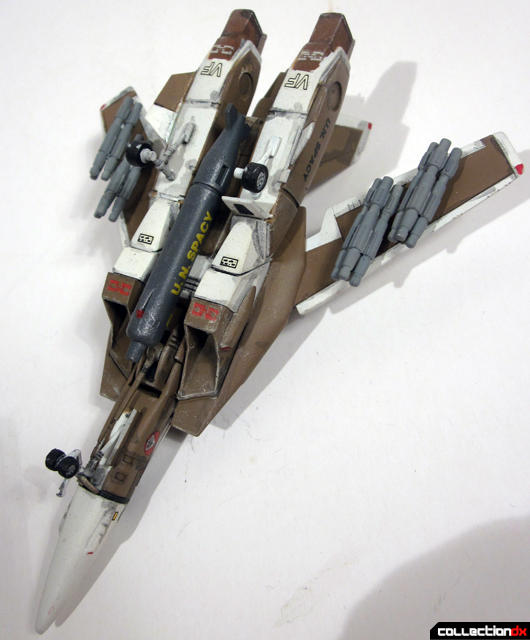 Of the three Valkyrie Arii issued kits, the fighter I believe is the only one worth investing time to build. It would fit well in your anime model kit 1/100 collection fine but if you build 1/72 scale aircraft it would be better to build Imai’s excellent 1/72 Variable Valkyrie kits or Hasagawa’s recent 1/72 kits. These old Arii kits are always being reissued every so often so they are not hard to locate. Most importantly if you are beginner modeler this is an easy and fun kit to get started on if you want to build up your Macross model kit shelf.

4 comments posted
the ARII kits were rushed to

the ARII kits were rushed to market in the 80's when MACROSS was first on the air, to capitalize on the show's suprise success. So no wonder it's a little out of scale. ARII was rushing to get product onto store shelves. I doubt they thought the kits would be re-issued so many times over the years.

it's strange- you ask early on in the review why no one makes a 1/72 scale valkyries- but then bring up how good Imai and Hasagawa's 1/72 kits are... so two companies made nice 1/72 kits- why ask for more? It doesn't make any sense.

Yamato made a 1/48 scale transforming valkyrie toy- it's a very nice piece, and when people with model kit skills customize them, by painting and weathering, or with custom decals- they look *amazing.* You should consider buying one and customizing it if you're looking for a 1/48 scaled valk, the ones i've seen on forums that people have done up look far better than 99% of the MACROSS kits i've ever seen.

and again- thanks for covering these model kits.

Yes, That was a bit confusing as the start of the article But I was trying to get into the mindset of 1983, and as we both stated that Imai kits and later the Hasagawa Kits would more than cover that scale. I'm so close to finishing a 1/72 VF-1D Imai kit for a DX review, I should have it up next month.

I'm really not the one to paint up toys but I have seen some people do some fantastic paint and weathering schemes on toys. The only one I've ever considered painting a toy was one somebody painted up a 1/72 scale toy of the Flying Wing from Raiders of the Lost Ark and made it look ace. Why there isn't an Official 1/72 or 1/48 model kit of the Flying wing from one of the most popular films ever is beyond me. I'll most likely write Fine Molds as they seemed to be the ones that would release it if there ever was a release of the kit.

Having built several 1/72 Valks, it's interesting to note that they're still very small vehicles compared to modern jet fighters. They're actually only about as big as an F-16; the F-14 and F-15 are significantly larger, and the F-15 dwarfs them. (The YF-22, aka "Gigantor", somewhat restores the balance.)

Compaired to a F-14 the Valkyries are definately the smaller aircraft. Knowing the maddness of people maybe one day somebody will build a 1/1 scale Valkyrie like the Gundam head at the Bandai Museum or the Mazinger at that park in Spain.