Hailing from the second year of GI Joe releases in 1983, the GI Joe Collectors Display Case was an item I never purchased until last year. This is an example of changing tastes of a release that I did not care much for when I was younger and I now think is quite great and practical. 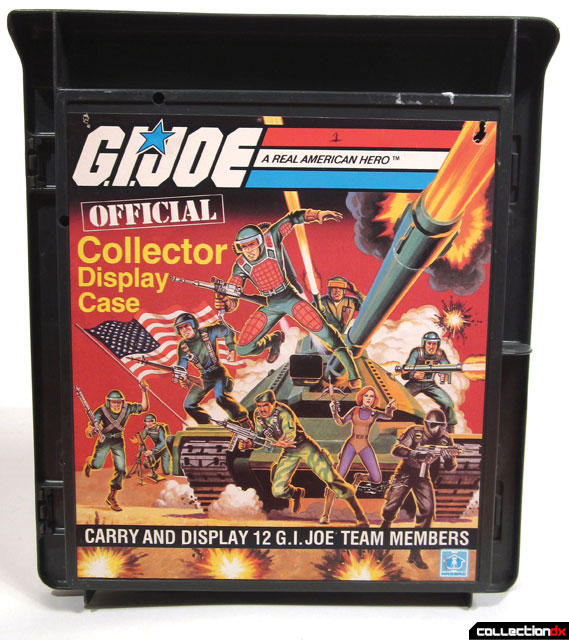 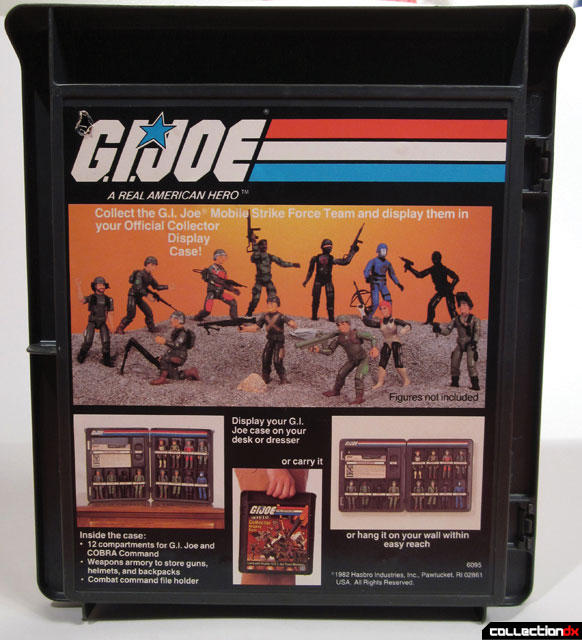 With a growing battalion of soldiers in Hasbro’s GI Joe: A Real American Hero line of action figures and accessories, Hasbro decided to released a carrying case for their figures early in 1983. Although with good intentions, Hasbro really failed to make a decent carrying case for their figures. Perhaps it was an explosion of so many figures every year that they could not keep up with a case that could adequately carry numerous figures and decided to just not produce one. 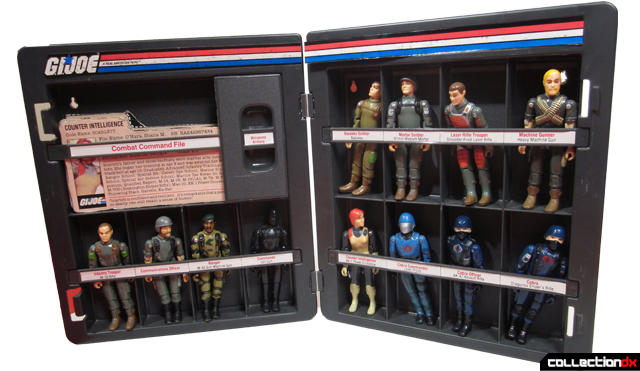 Their first effort, the GI Joe Collectors Display Case was not a bad release but by the time it hit the toy shelves I already had too many figures than spaces in the case and I really did not have the desire to have my parent’s purchase one for me. The figure tags also eluded to the 1982-year only figures and at the time the new 1983 figures seemed so much more cooler thus giving the case a “last years product” feel to it. Compared to the masterpiece of carrying cases Kenner’s iconic Darth Vader case, which held an astounding amount of figures, GI Joe Collectors Display Case only held 12 figures. 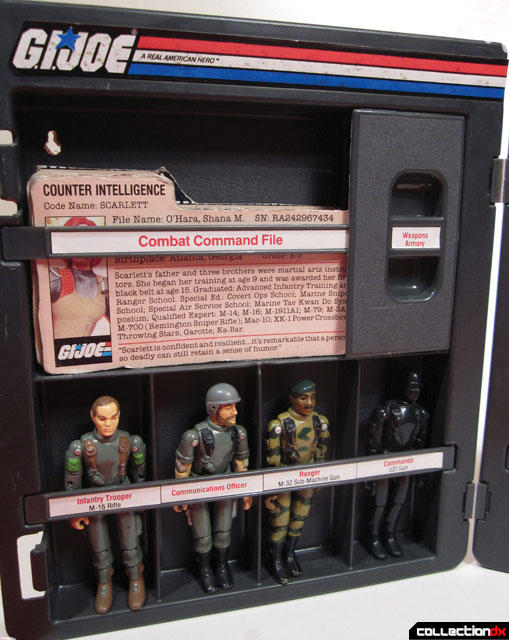 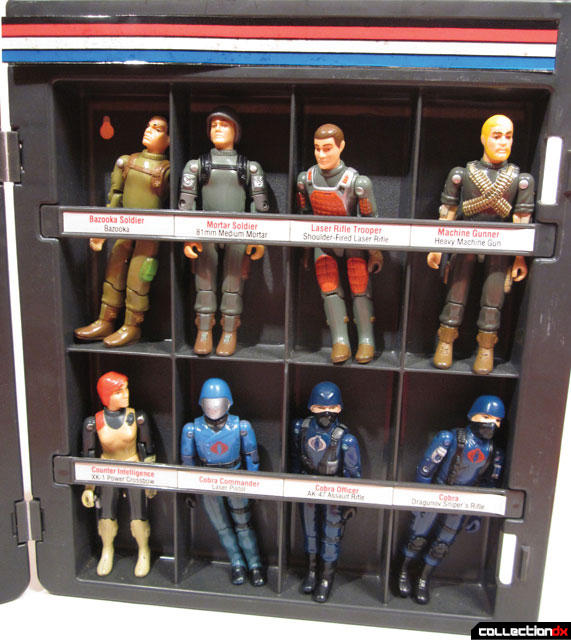 In the last few years I have been purchasing GI Joe items between 1982-1985 and anything with the magical year of 1982 embossed on the product is golden to me. When I was visiting the Sci-fi room at the Pomona Antiques Mall I saw a stack of these cases for $8.00 each and purchased one. All these years later I was finally able to inspect one of these cases and include one in my collection. 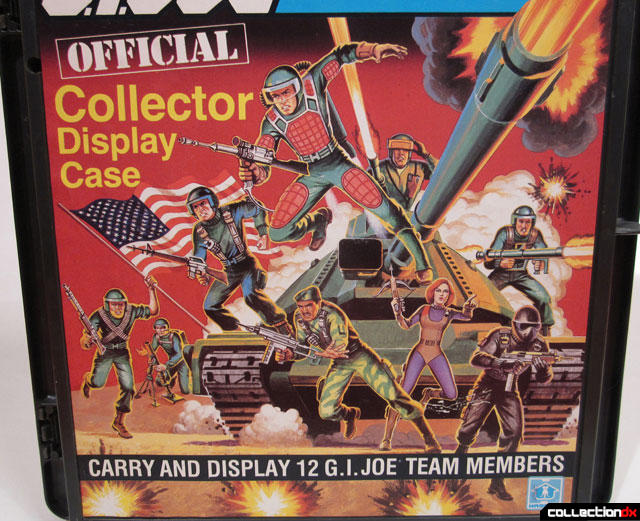 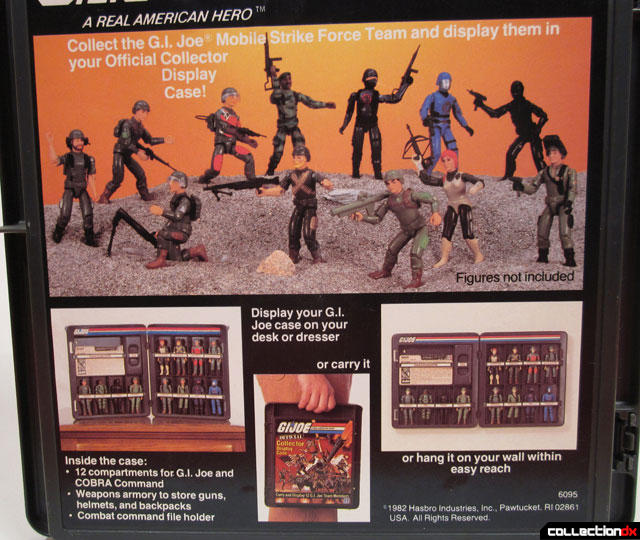 GI Joe Collectors Display Case was manufactured in good solid plastic, the kind of plastic they just don't make toys in these days. I love the exciting Marvel Comics style graphics on the cover and the cool diorama Hasbro toy catalog style graphic on the back. The clamshell case snaps firmly open and closed. The decals later came with a second set of 1983 figure names to place in the case. Weapons could be placed in an open space that has a cover that also firmly snaps shut. I also admire how there is a space for GI Joe File Cards. Two pre-cut holes are also included in the upper corners that could be cut out thought the graphics to hang the case on the wall with two nails.

The theme for 1982 GI Joe is “simplicity” and today that is what I enjoy about this case. When I set up my glass case for my vintage toy display at home I wanted to display some of my Joes as well. One shelf has this case with the figures and file cards to represent my entire GI Joe collection. The simplicity of the GI Joe Collectors Display Case on display with the figures and file cards speaks volumes for my entire GI Joe collection. 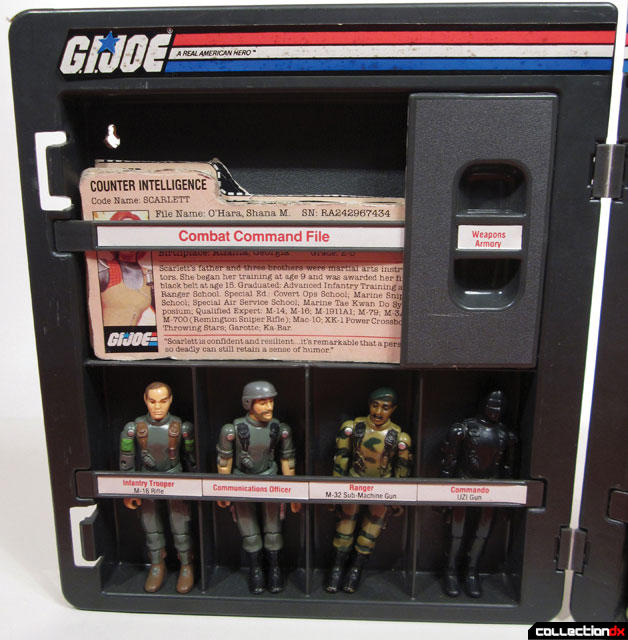 I still believe that Hasbro failed to make a case to carry numerous GI Joe figures and it is a shame we missed out on a product that should have been. Today collectors are more concerned with displaying their collection than carrying them place to place and accordingly the GI Joe Collectors Display Case has certainly lived up to its name in a big way.