There's really no denying it - Govarian is pretty ugly. It attempts to bridge the gap between classic super robot, and mid 80s mecha, and it fails miserably. Go Nagai must have been having a bad week when he designed Govarian and his motley crew.

The thing is, I can't help but love him. I've always rooted for the underdog, and Govarian is generally regarded as a waste. Govarian also holds a small place in my own personal robot history. Let me explain...

I used to be very into comic books, and back in the late 90s I had just begun to revisit my Shogun Warrior roots. I was hanging out at this comic store in Dracut called Command D. The owner, George, brought this figure out to me in a beautiful silver box. I had no idea what it was and neither did he. I knew it was Japanese, and it was very cool, so I took it off of his hands for a small sum.

I rushed home and fired up my Pentium 133 computer, and connected to the Internet. As the buzz of the 28k modem whirred in the background, I found a manufacturer... Poem... A quick search brought me to Alen Yen's ToyboxDX, and the rest is history... One of my first genuine vintage robots was the ST Poem Govarian.

The Govarian obsession had begun.

I later found out that there are three main Govarian toys, along with a magnetic vinyl. The largest of them, the DX Govarian (proper name is Kyogokin DX Psycho Change DX). ToyboxDX says this about Poem, and the term Kyogokin:

The Poem logo on the Govairan boxes is as derivitive as the look of the title character. Dangerously similar to the famous red oval of Popy, it would seem to be designed specifically to confuse young toy buyers. As for the Govarian toys themselves, they are amusingly all referred to as "kyogokin DX" pieces, regardless of size. (As an aside, "kyogokin" - "strong alloy" - was a brand name also employed by the even MORE obscure toy-company Sakura.) A fairly common bootleg version of Poem's largest Govarian piece, made in Taiwan by the "Chi Hung" company, was sold in an English language box.

The toy being reviewed here is that bootleg made by Chi Hung. It's almost identical to the original, aside from the packaging. One major glaring difference is the red chest emblem - it's upside down on the Taiwan version. The paint on the feet is not as solid on the Taiwan version as well.

Govarian stands about 9" tall, and has very little metal in it. The feet and upper legs are metal, but that's it. It comes with 1 set of fists (the original has 2 sets), 4 missiles, a sword, rifle, and 2 red discs.

Govarian can actually transform into some kind of space train. It's one of those "lay it down and now its something else" transformations. Turn the feet down, push the legs up, unfold wheels on the back, collapse the arms, fold the head into the chest, and pop out the wheels underneath the back. Finally, add the gun to the top. Not remarkable, but nothing is really remarkable about this toy, except the price that the original goes for. I've seen the original DX from anywhere between $200 - $500, and I've heard reports of it going for more.

While Govarian made little impact in Japan, it found a second life in South Korea. Sometimes known as Gobarian, Govarian had its own bootleg toy in South Korea, as well as the design of Govarian being used for toys of Mazinger, Grendizer and Taekwon V. I wouldn't be surprised if there were more Korean toys of Govarian than there are Japanese Toys. 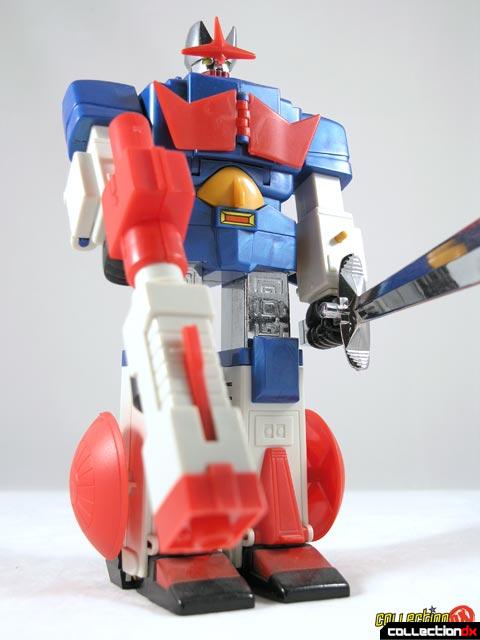 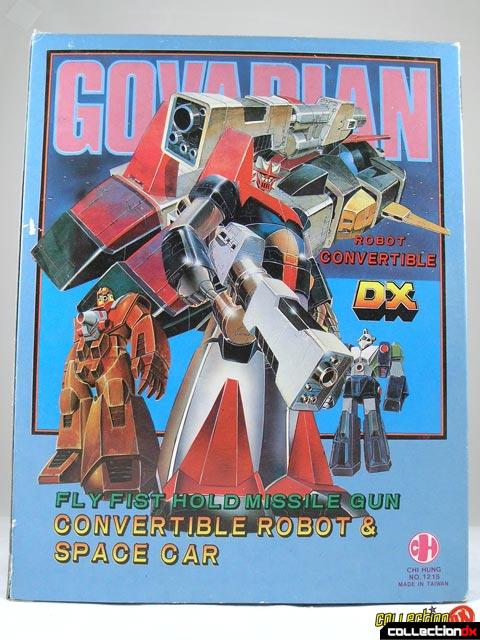 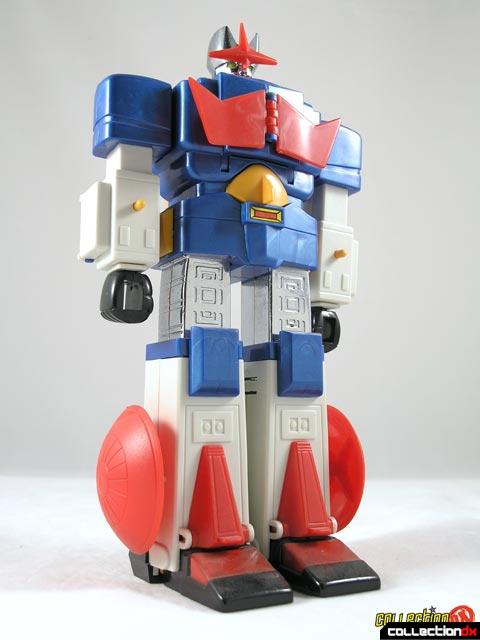 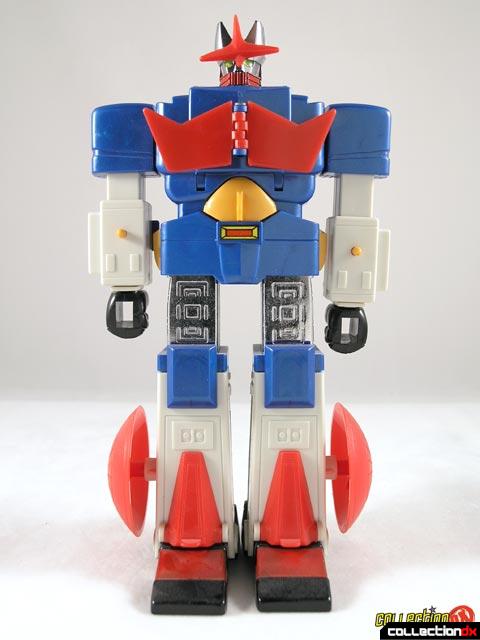 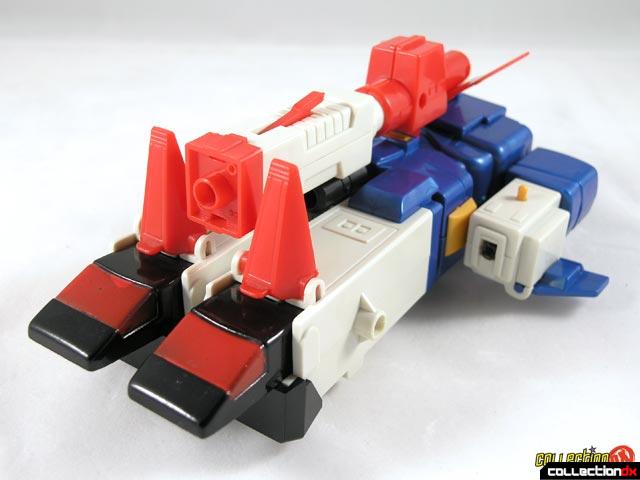 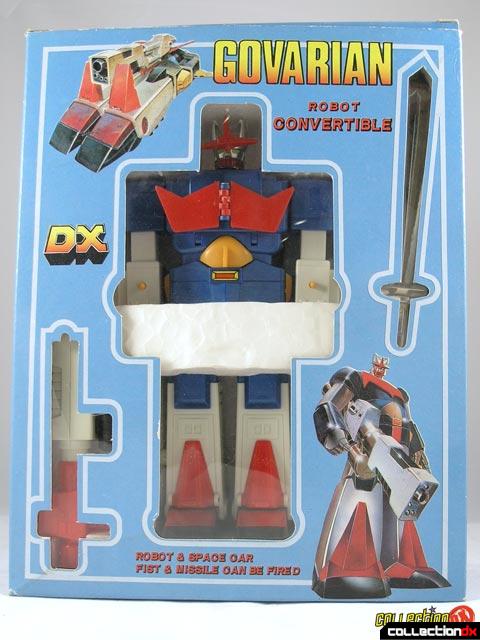 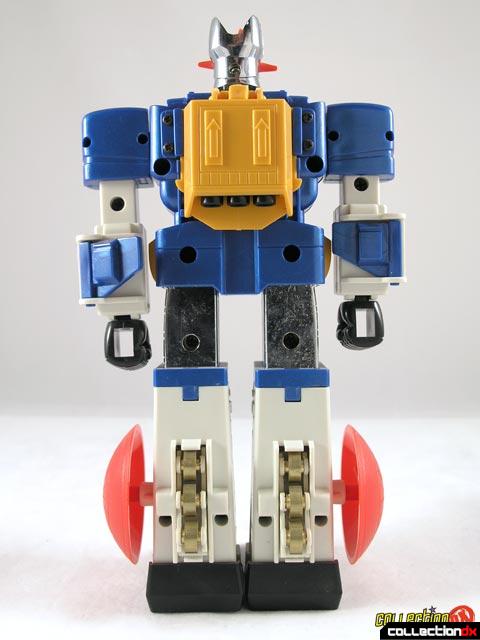 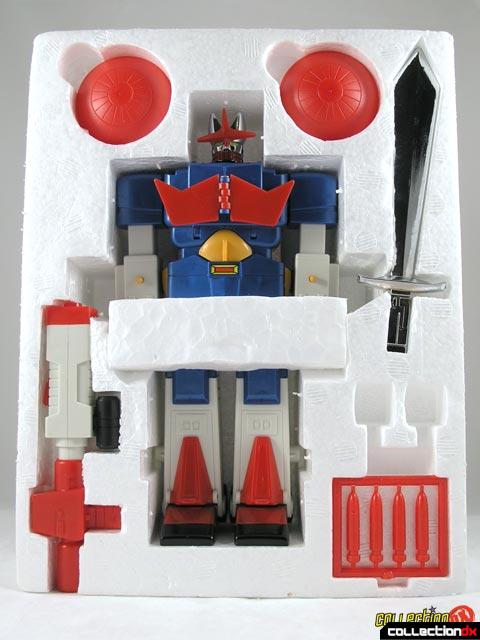