The XA Fighter Robot is a bootleg of the Clover "Basic Fundamental" Xabungle, originally released in 1982.

The toy is a sturdy diecast gokin and it comes in a very 80s box. The black cardboard box features a cellophane window that can display the figure. Oddly though, the toy comes packed with a styrofoam cover, so by default all you see is a white styro cover. Removing the cover and placing it behind ensures proper display. 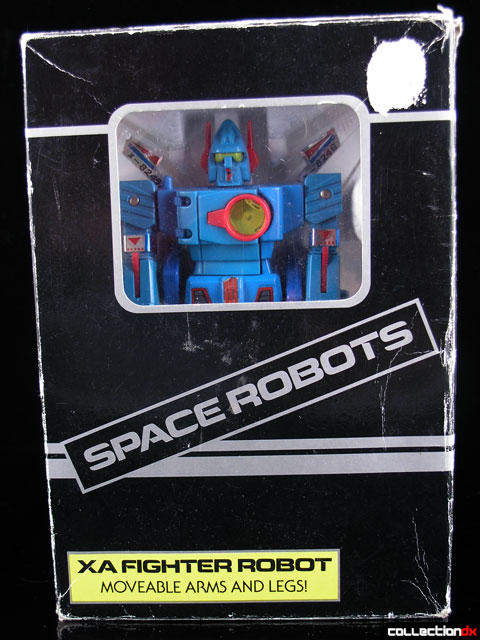 The box features other toys released in the line. Together they are called simply space robots, but their Americanized names gives a clue to their origins: 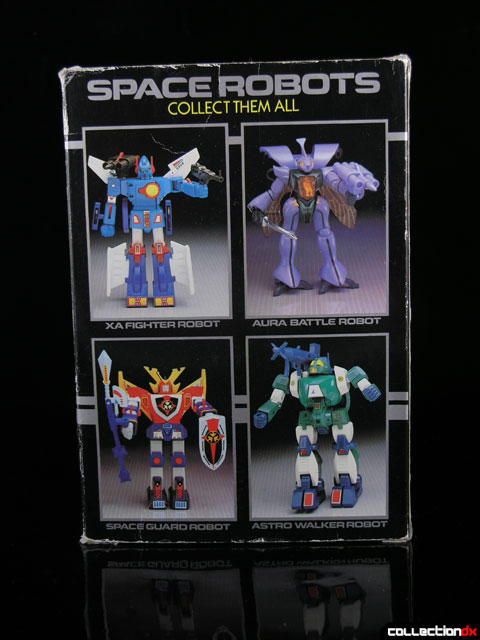 This toy is credited to a toy company named Alps, who is most widely known for Tin toys. Alps (Shojo Ltd) is a Japanese company founded in 1948, and still exists in some fashion today. 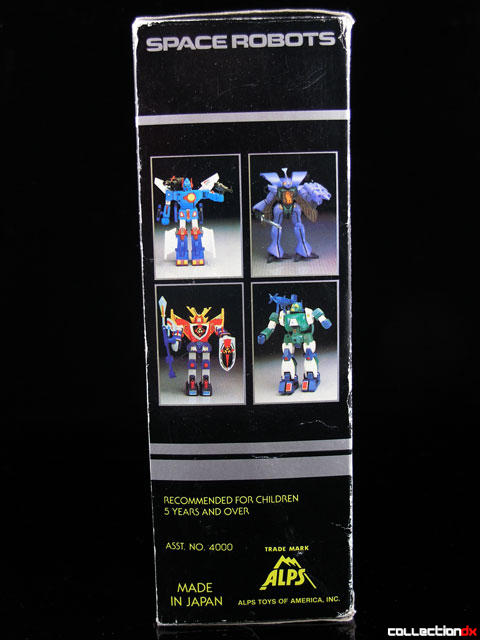 Although they stopped making tin, the business continued in toys and other merchandise. Clover, the toy company responsible for the original Xabungle toys, went out of business in 1983. It is likely that Alps acquired the molds for these toys when Clover went out of business. On the back of the toy, it is still clearly marked "made in Japan" but the Clover markings are blocked out. Considering the massive amount of bootlegs of Clover Xabungle toys that came out after the companies demise, this idea is not so far fetched.

Alps supposedly stopped making toys in the 70s to focus on consumer and industrial electronics, but this toy shows that they had at least some hand in toys during the 80s transformers boom. Alps Toys of America Inc. was incorporated in California in 1981, but has since disbanded. Alps is the parent company of Alpine, the car stereo maker.

Enough of the history lesson.

The toy is just about the same as its original counterpart, with a few minor differences. There is the aforementioned blocking out of the clover copyright info on the toy, and the reflective gold sticker on the chest is slightly different. The biggest change is likely due to safety concerns for the US market - the fists are glued on. Otherwise, its the same toy. 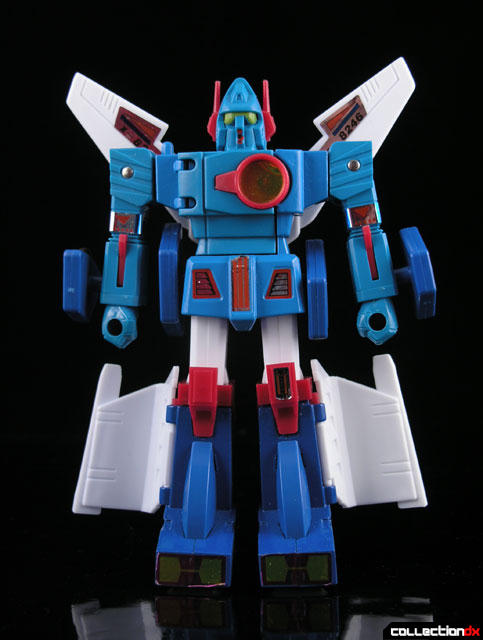 The XA fighter robot has a considerable amount of diecast, specifically in the lower legs and the torso. 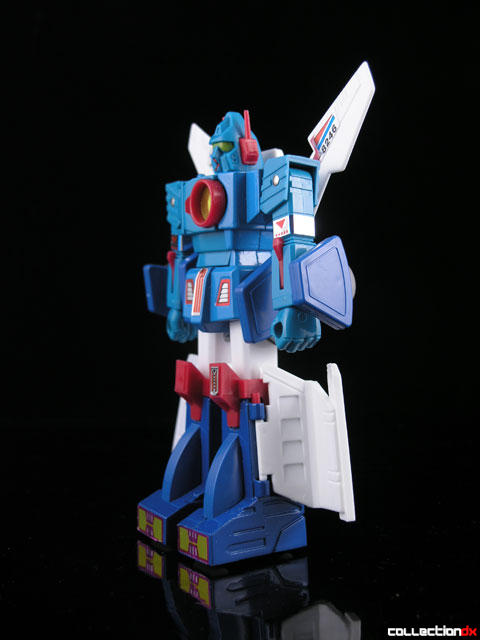 Much like most toys of the day - articulation is almost non - existent. The arms can move but that's about it. The toy is not without gimmicks though. 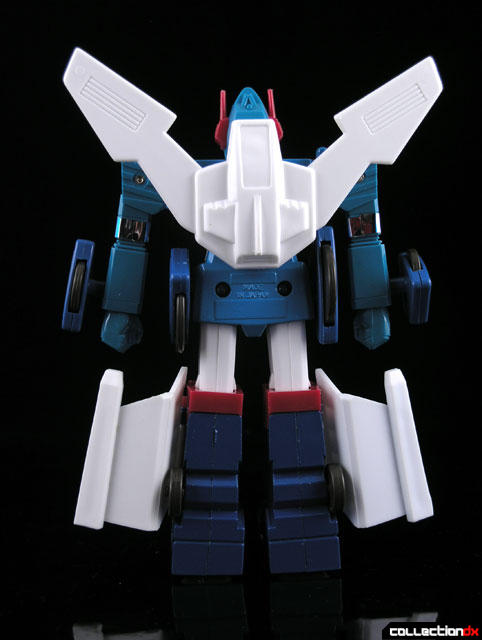 The feet have metal rollers underneath, and there are three other sets of wheels on the toy. As we all know, the original Xabungle transforms into a truck and trailer, but this being the mid-priced model, it doesn't really transform. Parts of it look like it should, but my guess this is just to re-enact the transformation sequence. 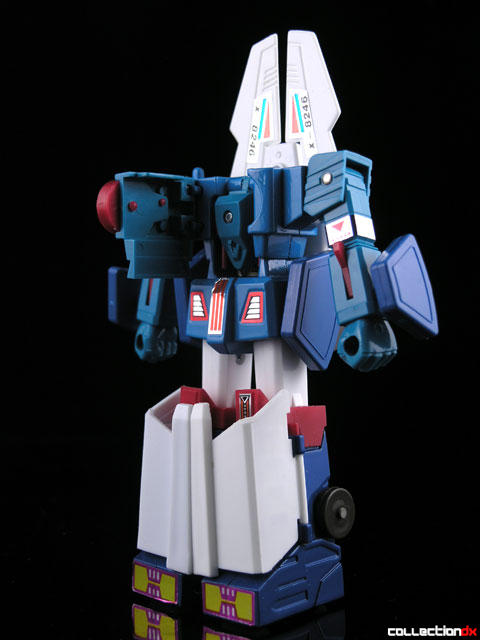 For example, the white covers on the legs can close, but the legs do not collapse. Nor does the toy separate into two sections. The wheels on the hips can move, and the whole assembly can turn around. Thee arms can go up and over the head but cannot meet in the middle. The wings on the back do close, but the whole top section needs to be able to rotate around but it does not. The head can even fold into the chest when you open the door but there's nothing to replace it. These are not failings of the bootleg - this is how the actual toy was designed. Perhaps they had grander plans but weren't able to execute them because of price. 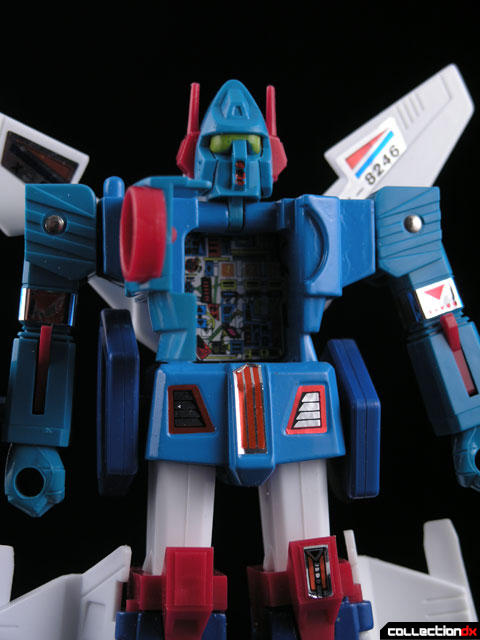 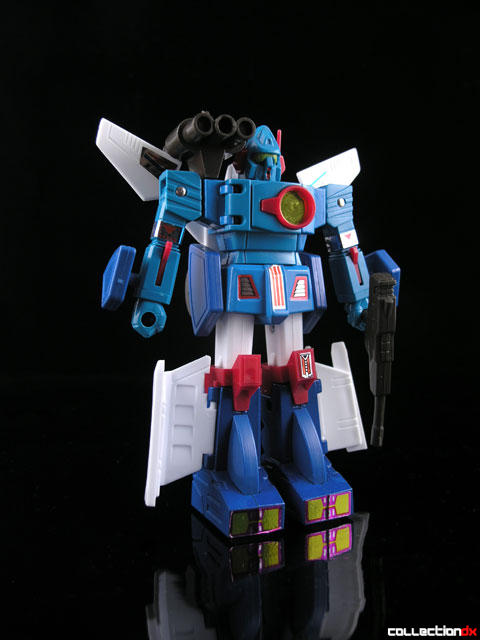 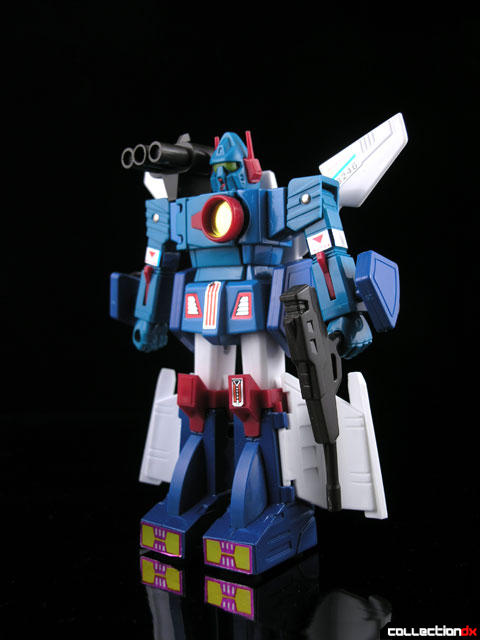 The Basic Fundamental Clover Xabungle has been bootlegged dozens of times, but this is one of the best ones out there. It is a cool toy on its own, but upon researching this I gained a greater insight to the culture surrounding the 80s robot boom when every company was scrambling to bring competitors to Transformers to the market. It's a topic that continues to fascinate me as my collecting scope continues to expand. 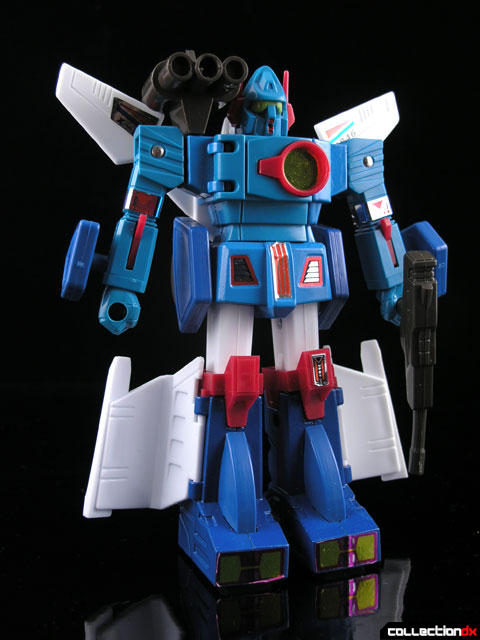 I never would have guessed, yet it's not too surprising.
That was a great read.

Nice item Josh. It's cool to see "made in Japan" bootregs, and not just as we think of most of them from Taiwan, China, etc.
I wonder if it's the same company that put out the huge Diogia DX remake called Magnatron (or,Magnetron, ..forgot spelling). I remember that also was a "made in Japan" product, but with english box writing. Exact Diogia replica, except for the helmet crest was eliminated.

Oh wow. So some Clover toys were available in the U.S. during the 80's? That's great.

I don't know how it was in other parts of the country, but here in California, you would see robot toys in every store. I don't care if it was a mom & pop dime store, or a big department store like Gemco or JC Penny, they had toys from shows that nobody had ever heard of - but didn't care because it was a robot. Even places like Swap Meets and yard sales had cases of toys, usually from people who had contacts in Asia.

Many were the crazy bootlegs that had just as much diecast as the original, but you often see Takatoku, Bandai, Gakken, Clover, Takara, and many other genuine toys in full Japanese packaging. Sometimes there would be crude stickers slapped on over the Kanji with names like "Space Hero" or "Heroic Robot Warrior", probably to try and give the toy some form of identity without a show to sell it.

This is how I got to know the joy of toys like the Mugen Calibur, Orguss Orgroid, Battroid Valkyrie, Machine Robo and others, years before I'd ever know what they were actually from. It was a great time to be a kid and enjoy all the great toys that would later be remembered as some of the best toys ever made.

I personally had an original non-bootleg Clover Dunbine like the one pictured on the back of the box in my collection for many years and here's a review of my Clover Mobile Suit Gundam I bought back in the day http://www.collectiondx.com/review/1979/mobile_suit_gundam

Like Duke stated above many of these toys were available everywhere, and if you were hip to it you could pick up some great classic robots at rock bottom prices.