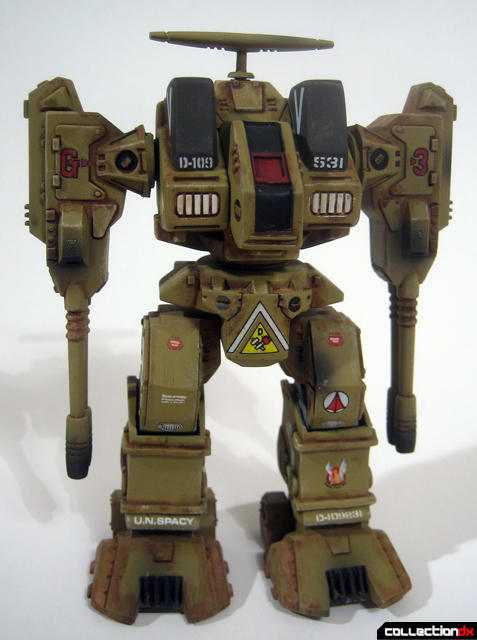 The Destroid Defender was one of five different styles of non-variable battle robots that were used throughout the 1982 anime series Super Dimensional Fortress Macross. The Destroid Defender was very much a walking anti-aircraft gun platform, armed with four cannons and operated by a single driver. Although they heroically put up a good fight against the Zentradi, the slow-moving and bulky Destroids usually became one of the series “cannon fodder” mechas. Regardless, they are affectionately remembered and have a cult following by Macross fans. 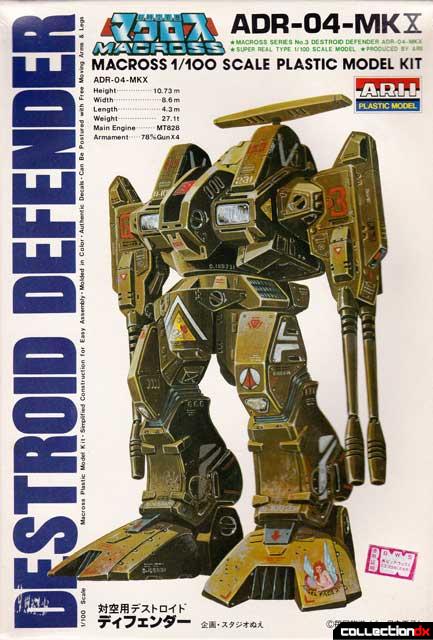 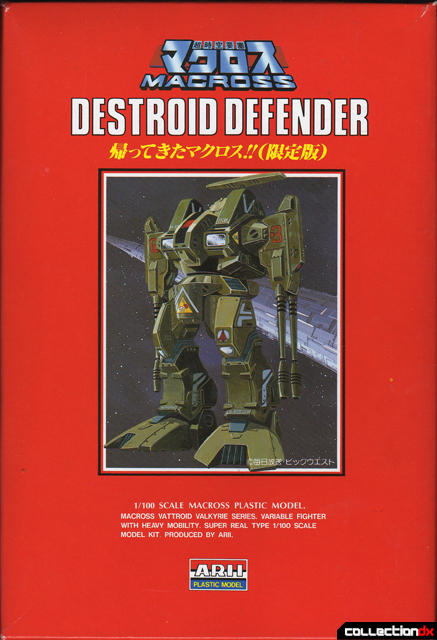 I had only build Imai excellent 1/72 Destroid Defender model kit when I was younger, and missed out on building Arii’s 1/100 Defender kit. I picked up my Defender from a dealer at Macross Con ’08 for $5.00, but they have been reissued periodically since they were originally released back in 1982 and can still be found under $10.00. This kit comes in a reissue box from the 1990s and although box art looks decent, I definitely prefer the original oil painting style illustrated boxes from the first release. 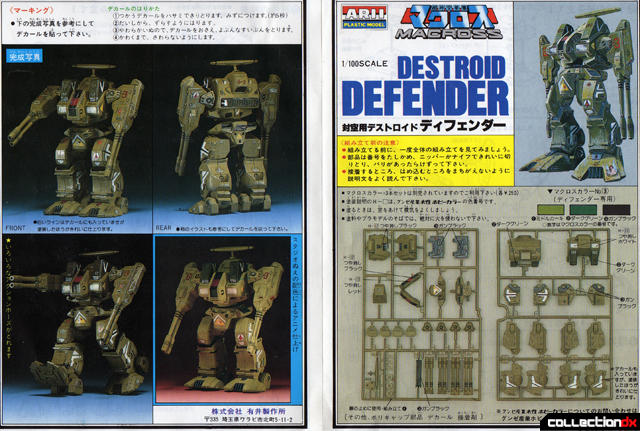 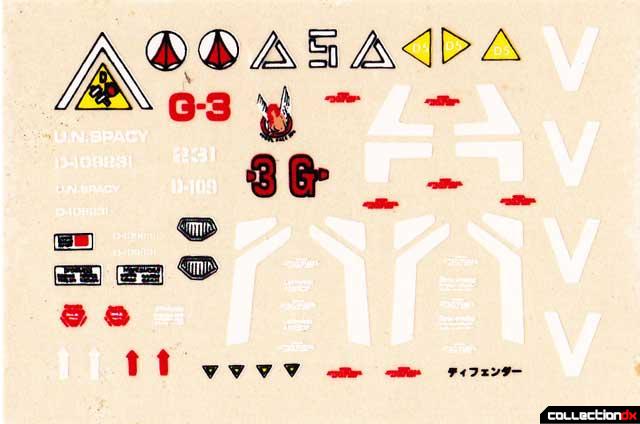 I have taken for granted the statement “…the model kit has sharp details…” that I forgot what a model kit looks like with soft details. The details of this kit are very soft and rounded, and not sharp at all, unlike a current Fine-Molds or Tamiya kit. I have always likened the Destroids to tanks and accordingly I am used to those types of details for a tank type kit. 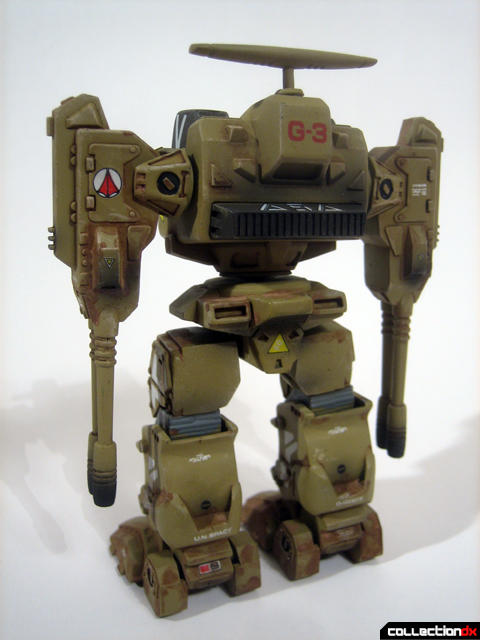 When these Arii kits first came out they broke the previous record of number of units sold, beating the previous record that had been held by Gundam kits when they first were released a few years earlier. Nearly 30 years later these Macross molds are still being used and the wear of the molds on these kits are starting to show. Make sure you have a lot of green putty because the fit is terrible, especially on the body, lower legs and where the gun barrels attach to the upper arms. Most of the time spent building this kit was filling up all the gaps with green putty and Mr. Surfacer 500. I also boxed in the arm pivot area with some thin sheet styrene to close up the gap and make it less toy looking. 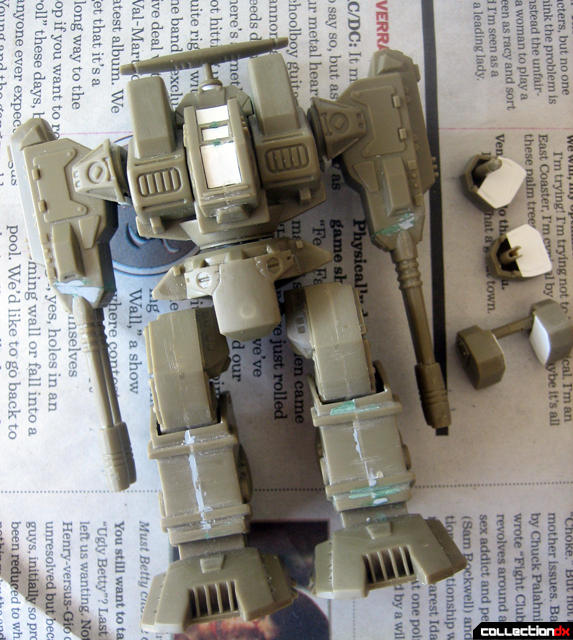 The good feature about this kit is that you are not committed to putting all the main parts together until you are finished building the kit. This helps with the ease of painting, decaling and finishing. The separated parts include the arms, legs, waist, body and radar. They easily snap in and out of place due to the polycaps. I wish that Arii did this for the feet as well, but as is, it is fine with me. 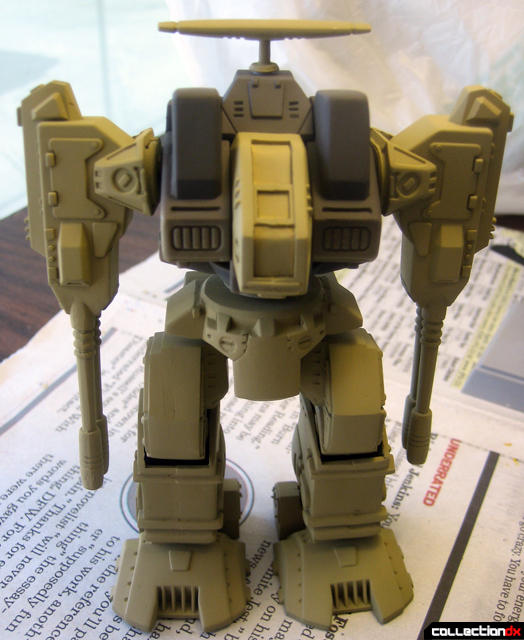 By far the worst engineering in this kit is the bottom leg section. It is nearly impossible to fill and shape the gaps in the front and back of the lower leg. Also they expect the modeler to chisel out the middle section of the front of the leg leaving only the small corner “L” shaped edges on the leg. I knew something looked wrong and it was too late before I figured it out. Why Arii just did not make it smooth with eight small “L” shaped parts to glue to the leg is beyond me as it is considerably more dangerous to allow a kid to chisel out that part with and Xacto-Knife than to just have eight small parts. The rear ankle parts had open holes, which I boxed in to get a solid look. 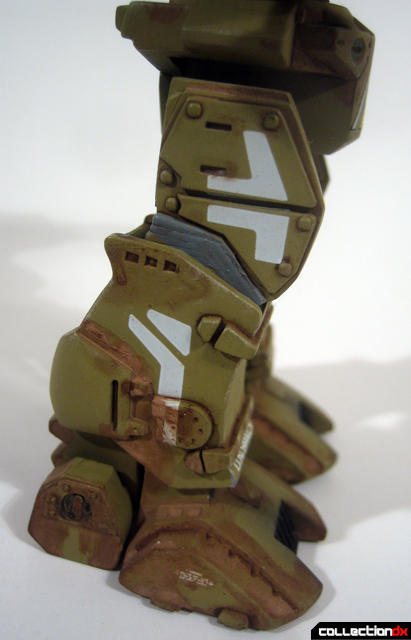 Gluing the barrels to the upper arm did not go too well either and after applying layers of green putty and Mr. Surfacer I was able to get a good fit. The front sensor part also had some difficulty. Molded in two halves (Parts 18 & 19), when glued it presents itself with a seam that is impossible to fill without damaging the surrounding area. I decided to glue some thin sheet styrene over the gaps. The result is great but it took a considerable amount of time to accomplish that goal. I also suggest not gluing the completed sensor part until the last step after painting and applying the decals as it would be impossible to mask off the ammunition box parts as it is a small area to work with. You will be glad you did. 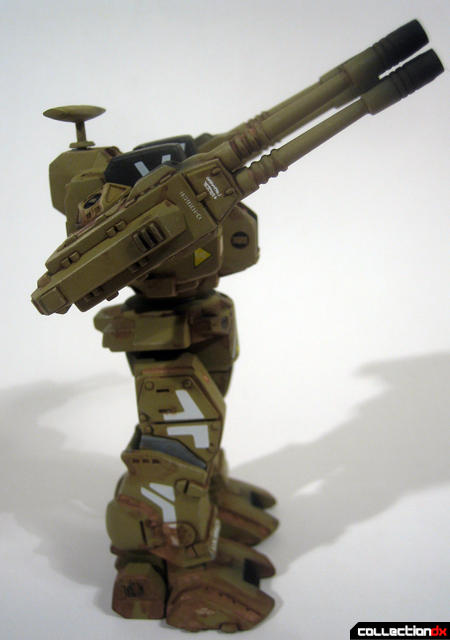 The real shame of this kit is not including any clear parts. These parts should include the clear sensor covering, the two headlights and the knee lights. A red clear senor gem should have also been included. The sensor cover should cover the red and black part on the “nose”. The headlights should be painted white or silver and knee sensors are represented as decals. A red gem could be scratched build and would greatly improve the look of the kit. 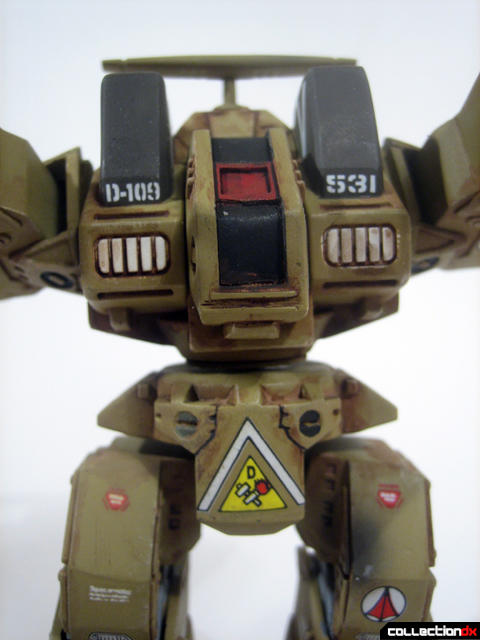 I have made some effort this year to improve my weathering technique and though the Defender would be a good platform to experiment with. As an undercoat I painted Tamiya German Grey around the panels and raised areas and painted Tamiya XF-60 Dark Yellow as the overall base coat. Tamiya Green Khaki was used for the ammunition boxes and Testors dark Gull Grey was used in lower knee area then sprayed Testors gloss coat for decals. 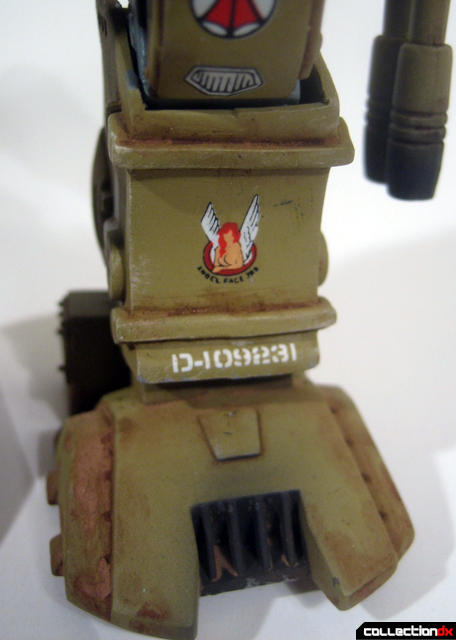 When I first saw the decal sheet I thought the decals were junk. They were very frosty looking, the details were not sharp and even the sheet was not cut correctly. Surprisingly they were some of the best decals I have ever worked with although one cannot read the words on the stencils. Unfortunately the decal placement was very vague in the instructions but luckily enough I was able to go back to my old Imai Defender kit and use the resources at Macrossworld.con to get the decals in the right places. One cool decal that the kit came with was some pin-up art for the Destroid named “Angel Face”. It is suppose to be placed on the left toe, but I moved it up to the lower leg for better display. Over all I love the WWII tank feel with the decals such as the pin-up art, geometric codes on the back, “V” ammunition box codes and stencil serial numbers. 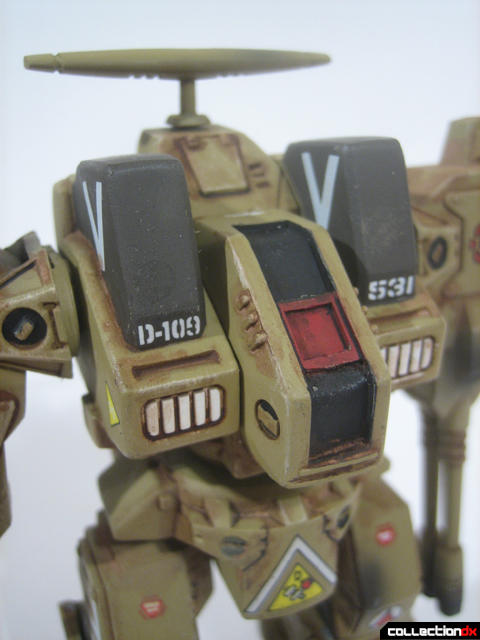 One complaint I have read about the kit is the application of the while leg stencils. The upper leg stencils after being cut in half presents no problem when applying but the lower leg stencils have to set on a high contour raised area. Believe it or not I got it to set with Solve-set a high concentration decal setting solution I picked up at the local hobby shop. It took a while and I had to work with it but I got all four stencils around the contour with no major problems. The finished product looks great and I highly suggest picking up a bottle of Solve-set for your modeling supplies.

After spraying a coat of flat coat, I applied a wash of Winston oil paints of Lamp Black and Burnt Umber. I dry brushed a lighter tan for the raised areas. Most importantly this was the first time I used MIG weather products from Spain. I wanted to represent a Destroid Defender from after the Battle of Mars in episode 7: Bye-Bye Mars. MIG products is a weathering system of paints and washes developed by a Spanish modeler named Mig Jimenez http://www.migproductions.com/index.htm that has very much taken the military modeling community by storm by introducing some unique products to modelers.

I bought Europe Dust P028 a powdery substance that is mixed together with MIG Thinner for washes. When the two products are mixed together it produces a thick muddy substance. The mud is then applied to the model with a brush, and when the thinner evaporates a very realistic mud coating is left on the kit. I only used it in the lower leg and feet area and other places where Martian mud would settle. It is going to take some mastering but I think these MIG products have a lot of potential for Sci-fi modelers. I finally airbrushed some black in the gun barrel tips and other assorted areas and sprayed another flat coat over the kit again seal it completely. 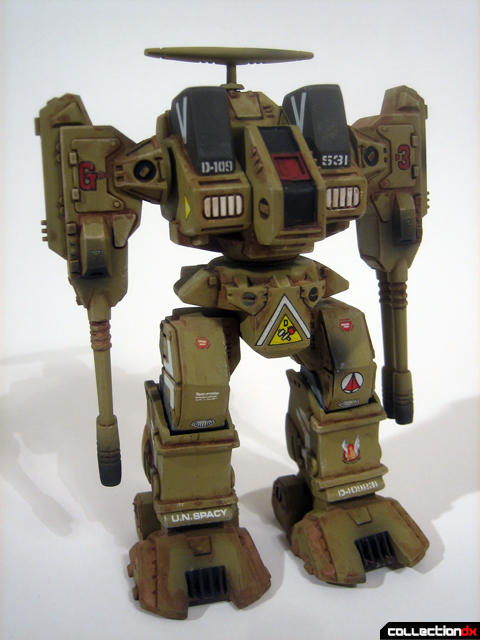 What do I think of this kit? At first I was quite disappointed with the kit with its soft details, lack of clear parts, ill-fitting parts and the many problems with the lower leg area. But after I painted, decaled and weathered it, the Destroid kind of came into its own. The raised details weather quite well and the small details such as the pin-up art make this an interesting kit. The Arii Defender kit does stand a bit stocky for my taste but overall I am quite pleased with the kit.

The real question is how much time do you want to spend on fixing a $5-$10 model kit? I only did some minor improvements but a modeling expert could make this a stand out kit. And for $5.00 it is cheap enough for a beginner modeler to have some fun, and the overall one color is great for modeler who uses spray cans. Yes this is an old kit, but unlike the Arii’s Valkyrie kits, with some elbow grease this kit still has little life left in it for the Macross modeler until a better kit comes along.