The Magnetype Dougram is one of the rarer Dougram pieces released by Takara.

I don't know why Takara released this toy. It wasn't part of any line, there are no magnetic counterparts from other series by Takara (excluding Microman). Still, I am glad they did, because it's a fantastic piece.

The toy comes packaged in a bright, high quality box with a die-cut clear window. The front features a beautiful illustration. 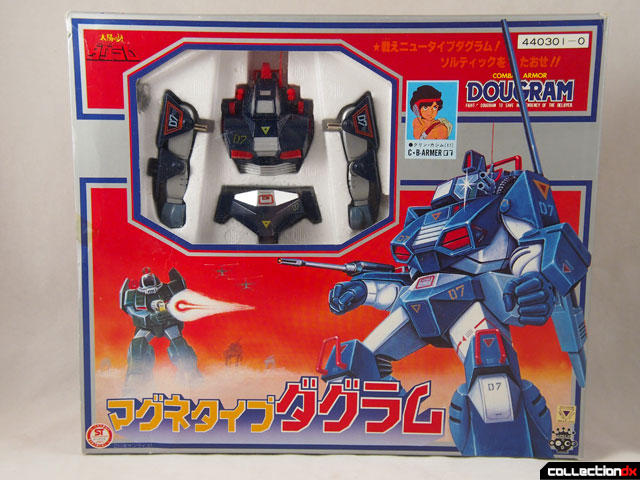 The back has a great line-art comparison with a photo of a kid demonstrating the play features of the Dougram. 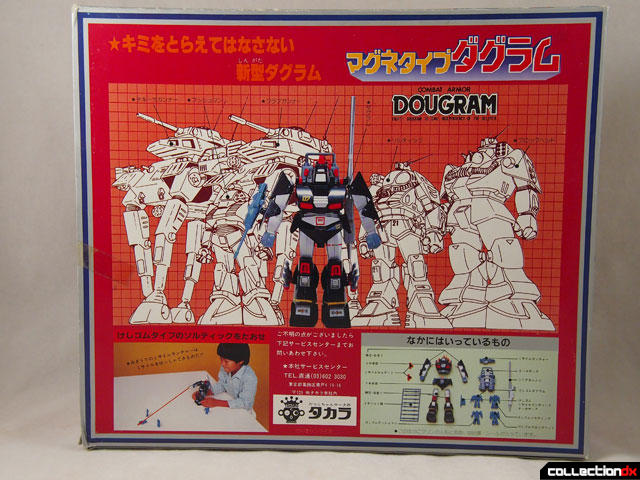 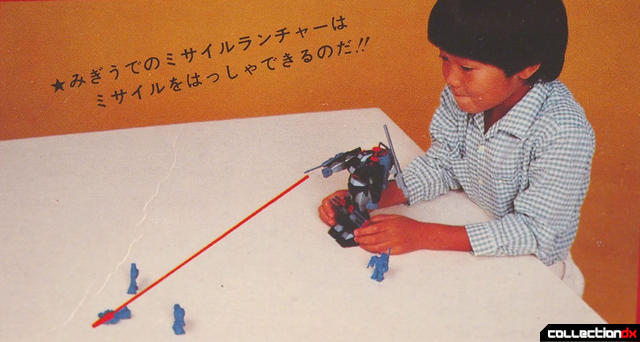 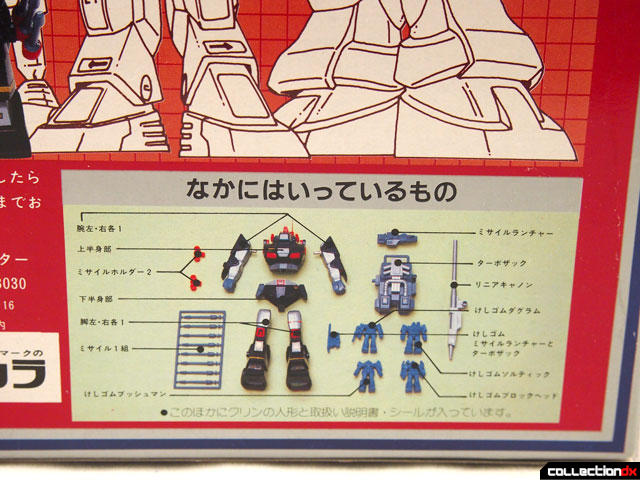 All the parts are laid out nicely in a styrofoam tray. 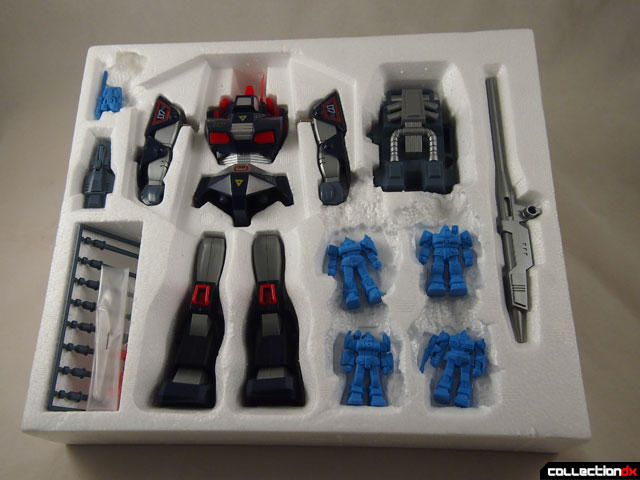 Over time, the small rubber figures have undergone a chemical reaction with the styrofoam tray. Most specimens of the toy you will find will have trays with holes eaten straight through. It's best to store the figures separately. 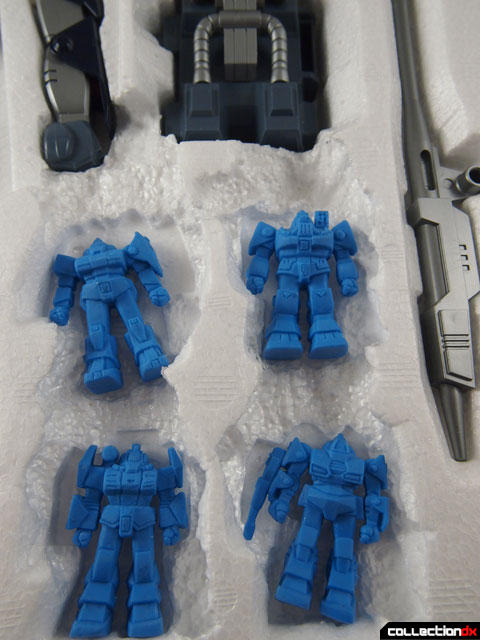 Instructions and a sticker sheet are included. 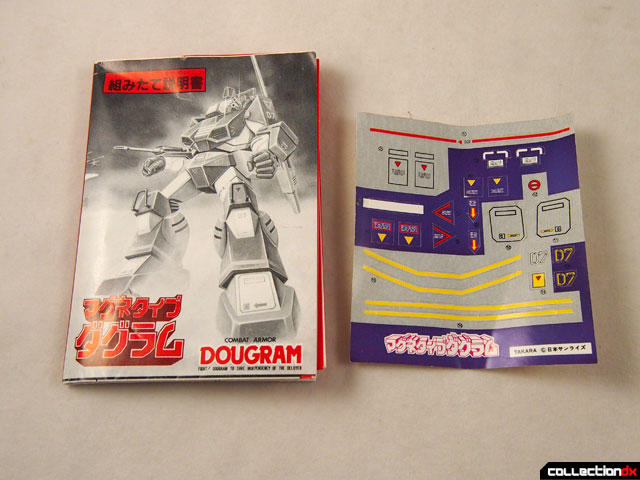 The assembled toy looks a lot like the 1/72 Dual Model Dougram. The construction, however, is very different. 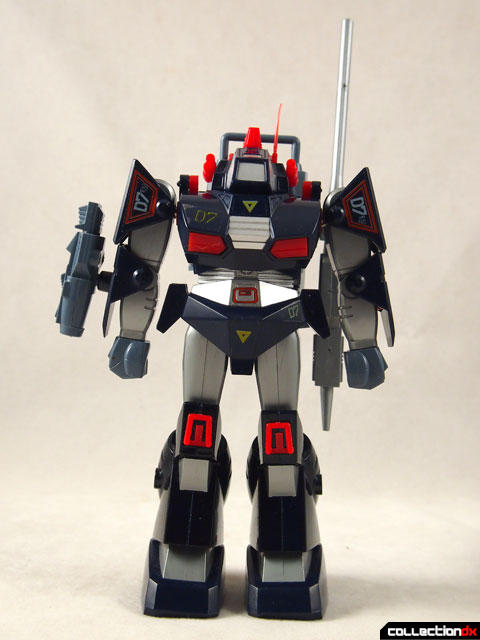 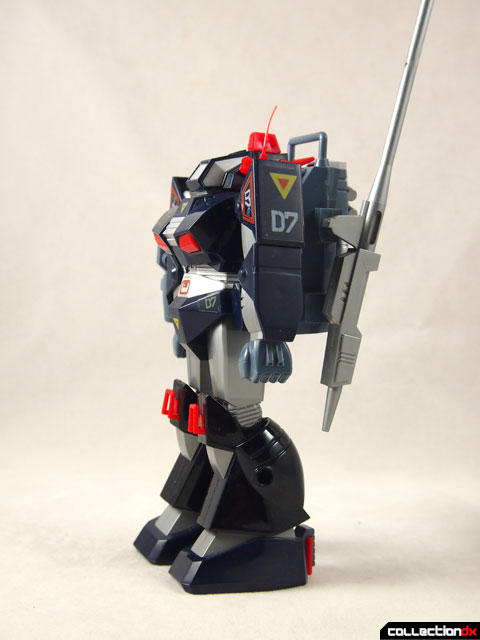 The toy separates into several distinct parts, but the only magnetic joints are the waist and the backpack. 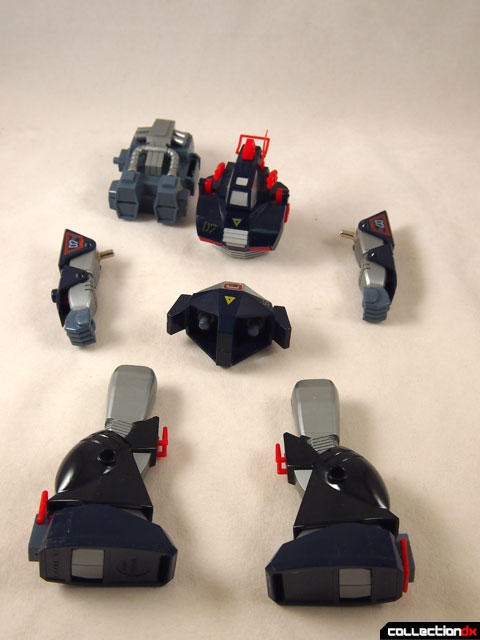 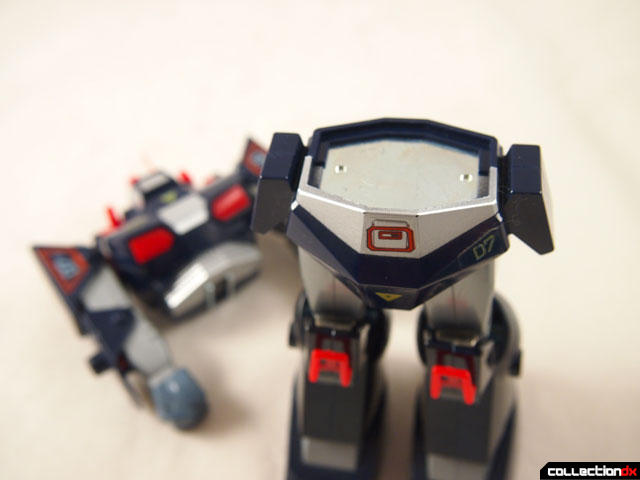 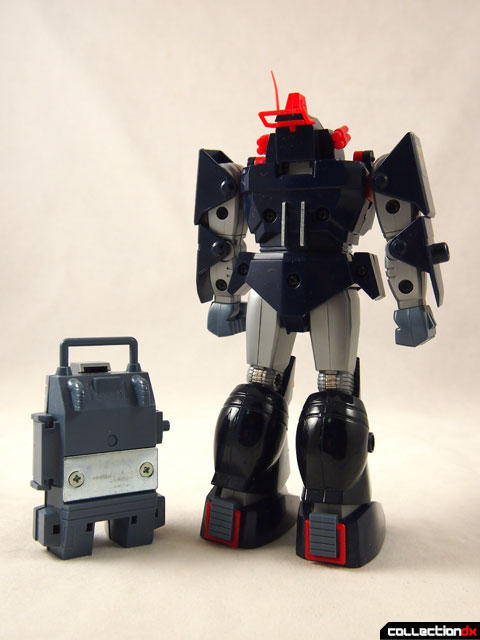 The backpack is a nicely detailed part on its own, with a movable shoulder cannon and an opening storage compartment. 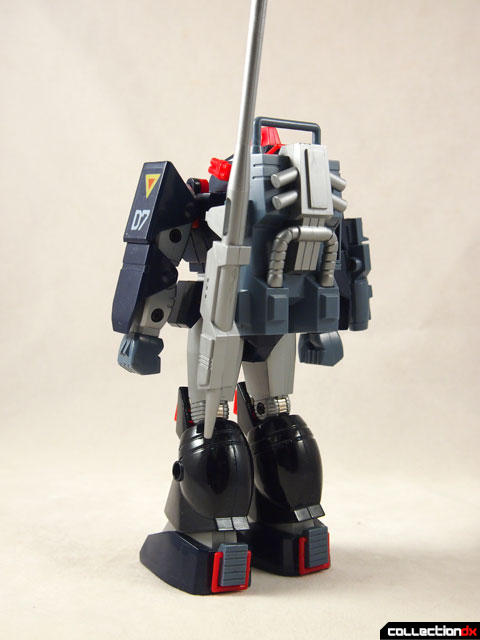 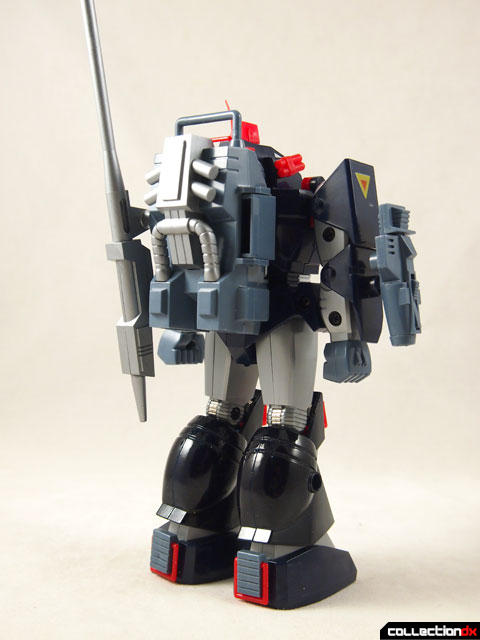 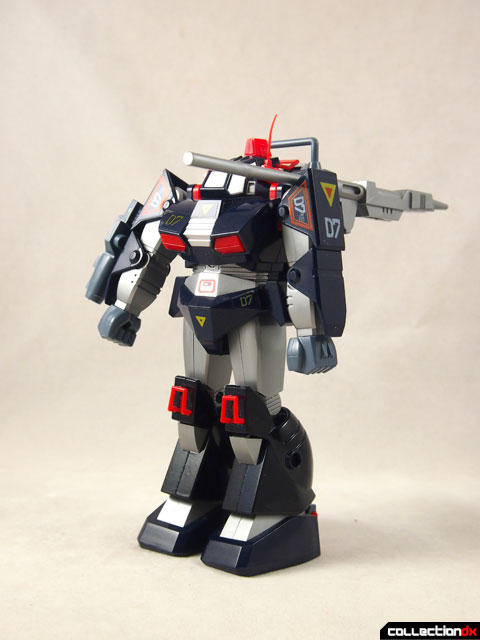 You can store the arm-mounted missile launcher and two missiles in the backpack. (I've left the missiles on their sprue for this review.) 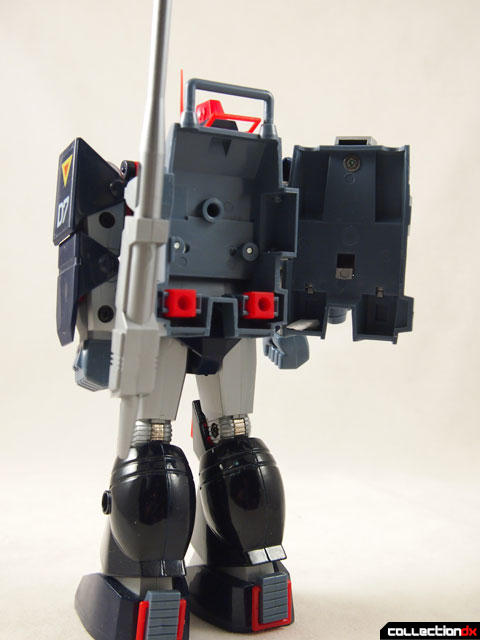 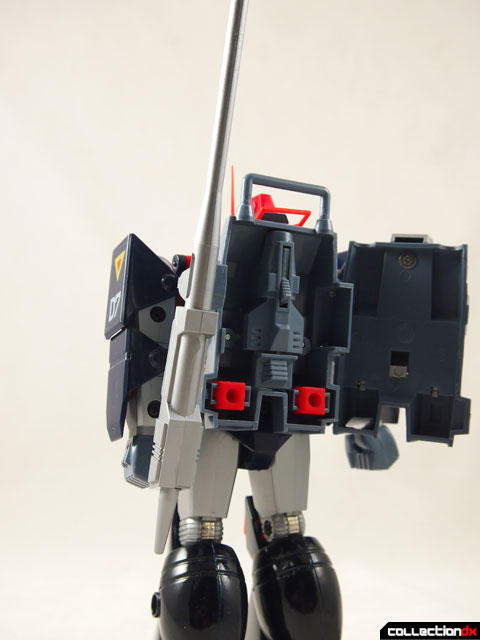 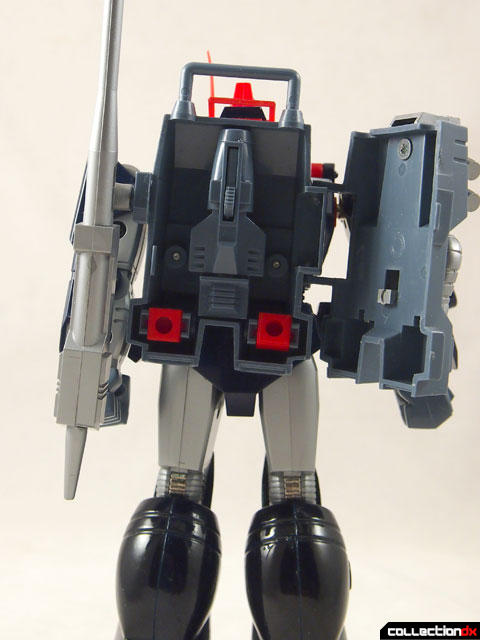 There are some key differences between this and the 1/72 Dougram. Notice the entirely diecast lower legs. 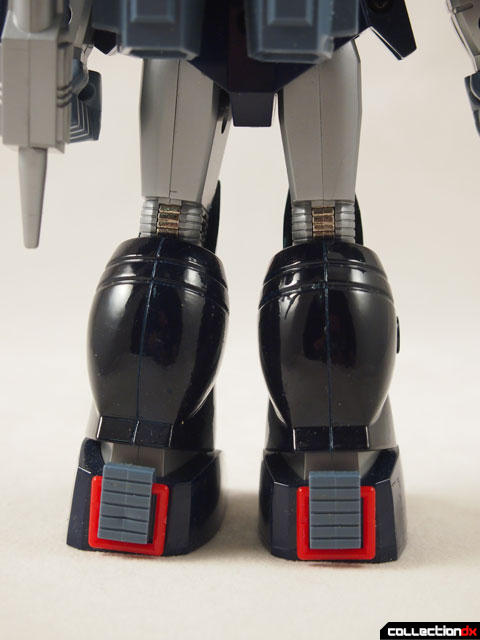 The cockpit opens, and a pilot is included (still in the bag). 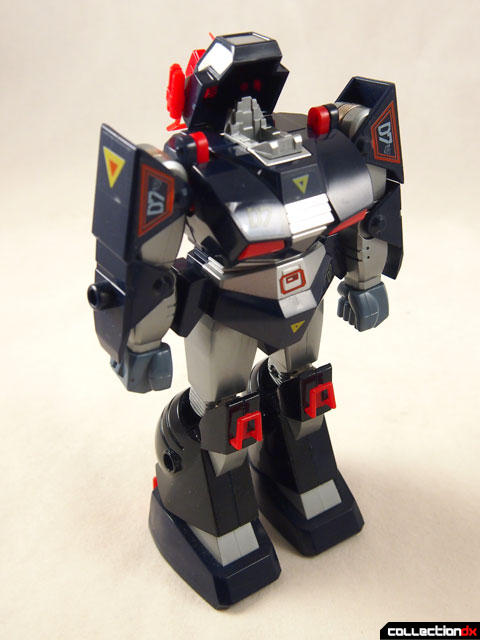 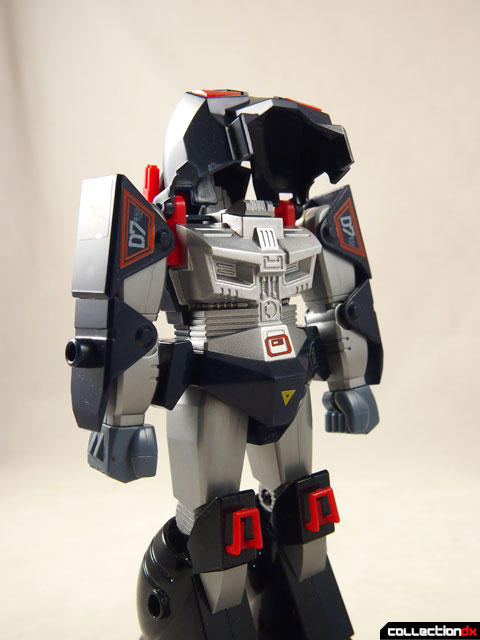 Overall, the accessory count is pretty high. There are also two missile holders that clip to the sides of the legs. 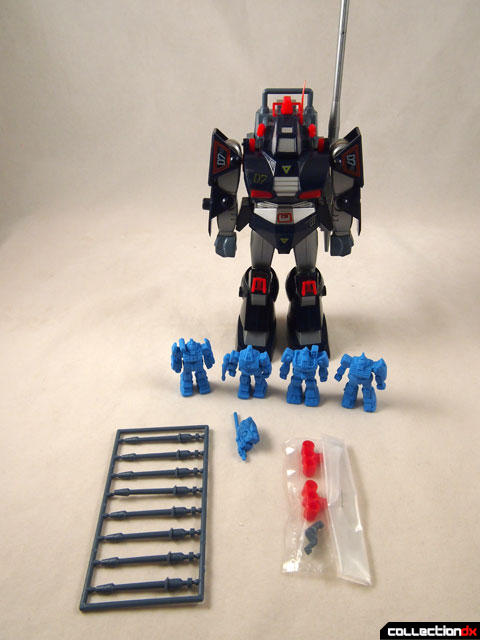 The included little rubber guys are, naturally, provided as target practice for the launching gimmick. Each is a nicely detailed Keshi in its own right. 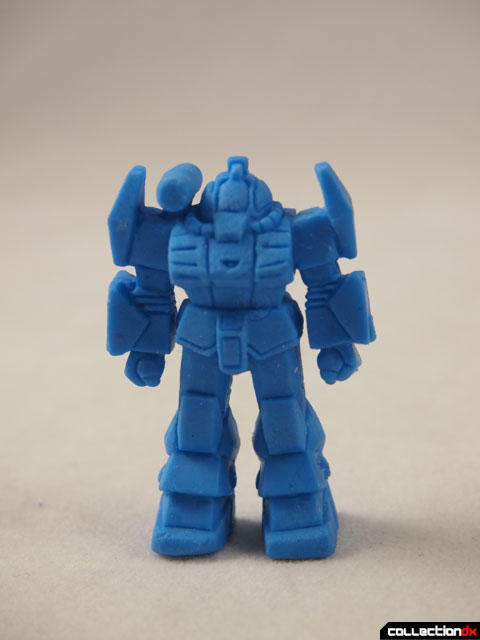 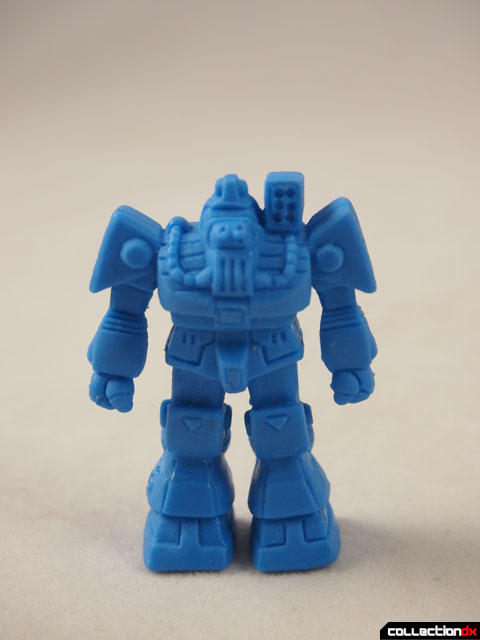 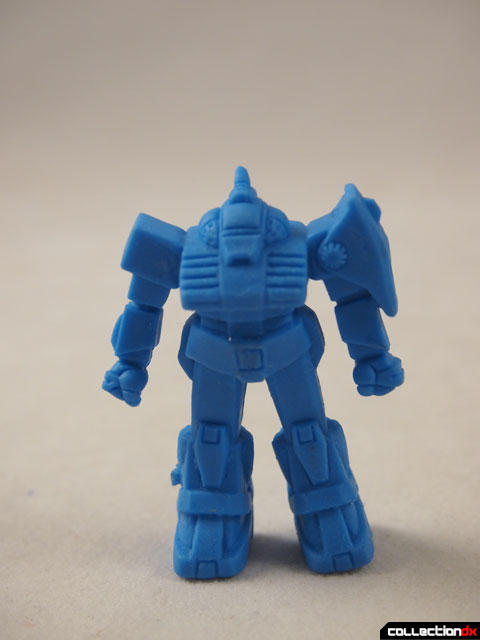 ...and a much smaller Dougram, with removable backpack. 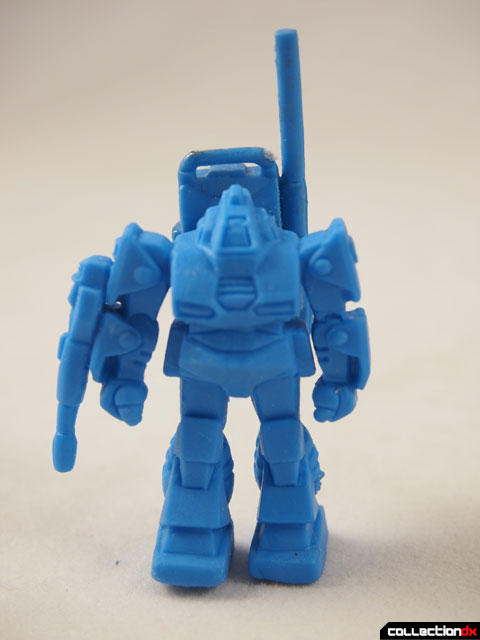 It's a classy piece, and a lot of fun, even if it barely qualifies as Magnemo. 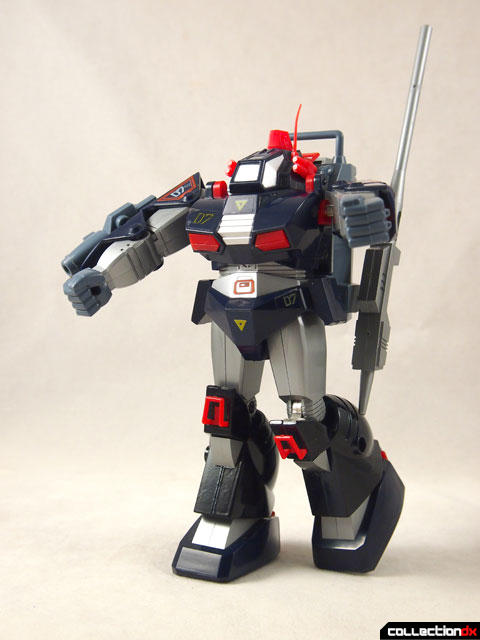 Are there other instances of this chemical reaction happening in other older toys that you're aware of? It's crazy how fast these guys melt through the tray. I'm surprised (and a little jealous) at how nice yours looks, to be honest.

I don't know why, but mine has two Crinn figures. One is still stapled in the bag, and the other one was already in the cockpit.

The only one I know of is the rubber to styrofoam, I learned this when I opened up my Spiral Zone toys after 10 years and the rubber boots created a melted path through the tray.

This toy looks great. I'd heard good things about it before, but seeing that torso interior really did it, and now I want one.

Also, that "how to play with it" photo is fantastic;
http://collectiondx.com/gallery/v/Toys/Takara/Dougram/magnemo/cover.jpg.html

It's a hefty toy that's nicely sized (only second to the 1/48 Dual Model). It's rare, but from what I've seen it won't kill your wallet.

As pointed out in the review, this toy makes no sense. I'm with Josh, however, and glad that it exists. It's my favorite Dougram toy. The colors and the interior detail and the missile firing and the stickers all combine to make a glorious figure that still has that Dual Model fidelity with a much more toyetic aesthetic and design sense. I LOVE it.