Recently I had the opportunity to hang out with Josh at his home, for the trip I brought along a few pieces for us to look over, one of them being an SG-01 Tetsujin 28. 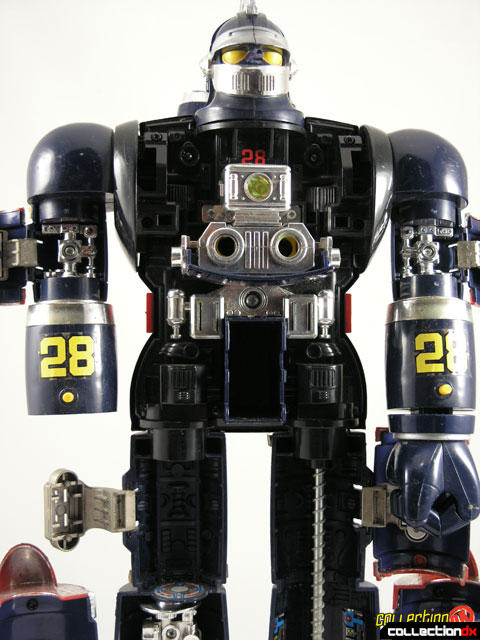 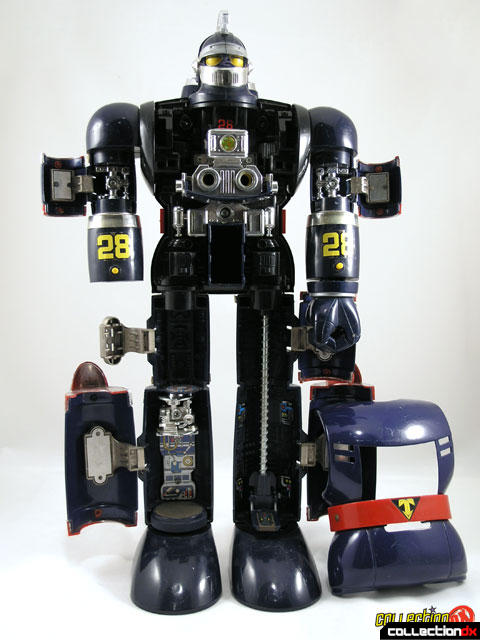 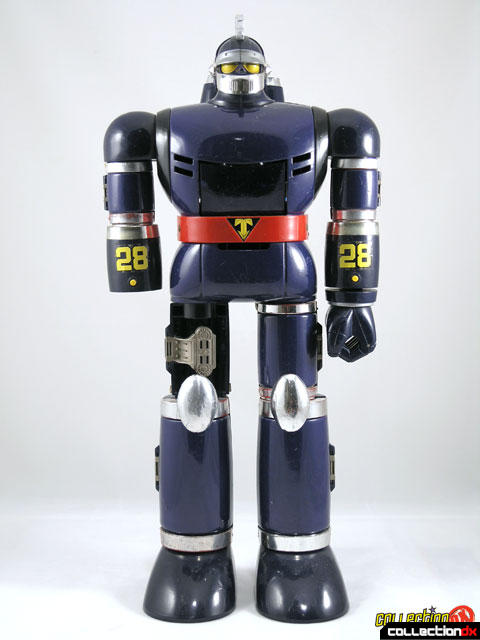 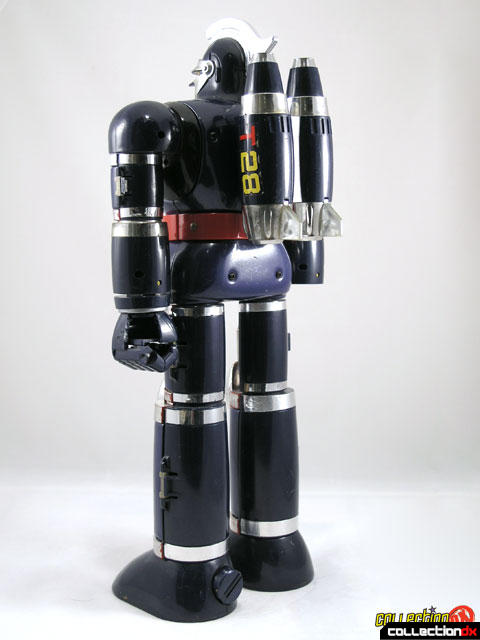 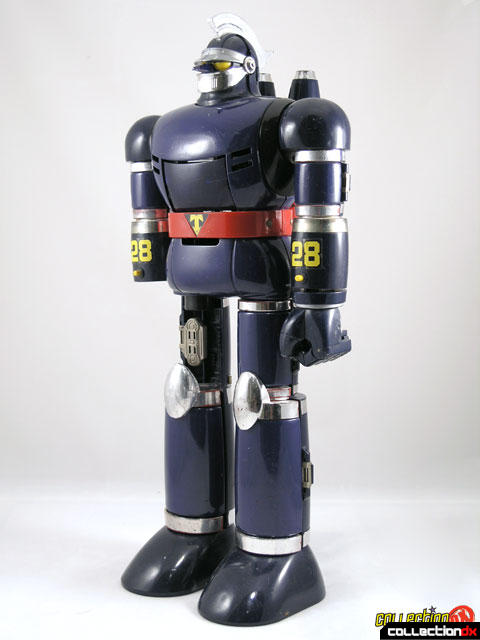 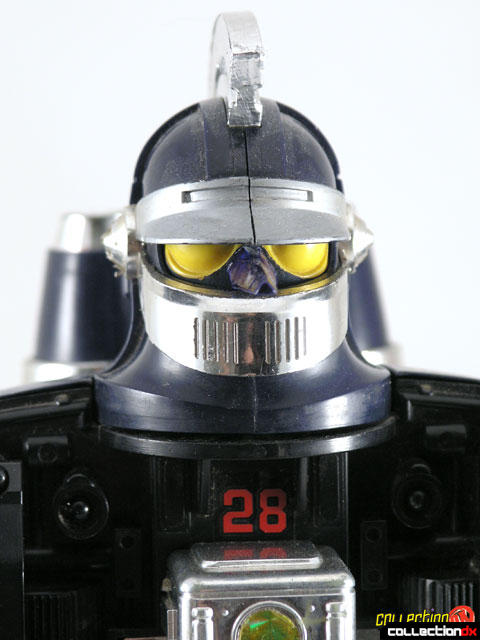 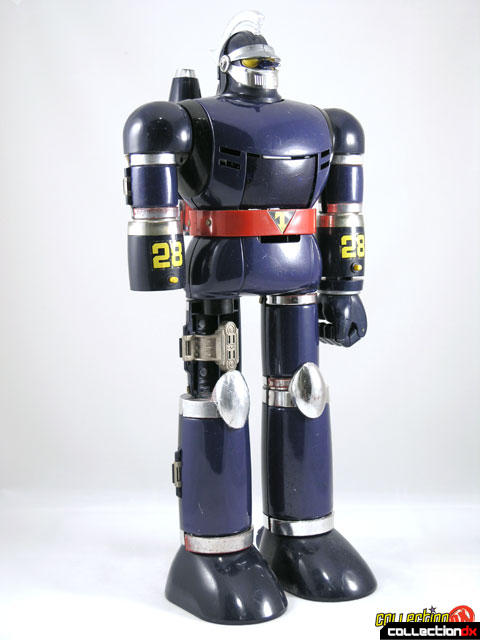 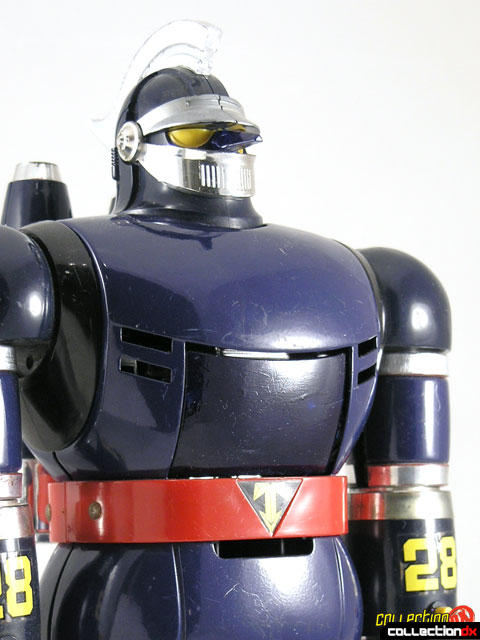 In 1981 Popy stared a new toy line that would consist of the largest and most complex die-cast toys they had produced up to that point. The Tetsujin 28 was the first, and unfortunately, the only piece to come out of this line, a victim of the waning toy market at the time. Standing at an impressive 16" its construction and features are like nothing found on any other pieces. On a quick glance it doesn't really appear to do much more than other die-cast pieces, with only 2 point of articulation in the shoulders, 2 missile launchers in the chest and the standard rocket punches. But then it keeps going.


The chest plate, upper arm sections and leg sections are removable and reveal a complete, and might I say quite lavishly detailed internal skeleton. In the stomach area there is normally a seat that a small figure of Shotaro can sit in, though I've never heard of Tetsujin ever being controlled by anything besides the remo-con. The right leg is fairly hollow; the ankle area has a small magnetic rotating platform that one of the mini robots can attach to and spin.


On the plus side there are several lithographed tin detail panels inside the leg, as well as chrome plastic mechanical parts. The left leg contains a screw operated lifting platform that goes the entire height of the leg, it is operated vie a crank on the back of the left foot, and works rather well. The panels on the upper arms open to reveal more chrome mechanical details.


The construction of T-28 is mostly plastic, with the back, chest, upper arms and front leg panels being constructed of steel with chrome plastic detail, an interesting move that gives Tetsujin a good amount of strength and a very "real" feel while not adding much weight (though it would have been nice if Popy had decided to smack this thing with huge hunk-o-gokin panels). By making the panels steel it was possible for them to attach via magnets attached to die-cast hinges. The rear jetpack also attaches this manner, and as I've been told, the small vehicle piloted by Shotaro can also attach in the same manner.


Well I think I've hit just about every detail aspect of this piece I can. Until I held it in my hands I was never all too keen on it to tell you the truth. This was purchased on yahoo Japan auctions as a back up plan after a sale of another item fell through. I'm glad I went for it though. The imposing size and mystique of the SG-01 can't be ignored when you're in its presence. Even though it's not all that hefty compared to other chogokin, and it might not be packed with missiles and multiple joints, it conquers all with its sheer "I'm large and in charge" factor.


It dwarfs ever other non-jumbo toy I have, including my Yamato 1/12 Scopedog. If you ever have the opportunity to pick this guy up, do it, the price is high, but in this author's eyes, it's worth every penny.


This specimen of the toy is obviously incomplete, and is missing the drivers, robots, a fist and a leg panel. The nose is a reproduction, and some parts have been touched up. If you have any spare parts for sale, contact the author.