It's been a while since I've reviewed an Ideon toy, and this time it's back to the classics with the TOMY DX Ideon. In the past i've shown Ideon toys by Yamato, Bandai, and Beat. Now it's time to check out one by the original licencee from back in the day. 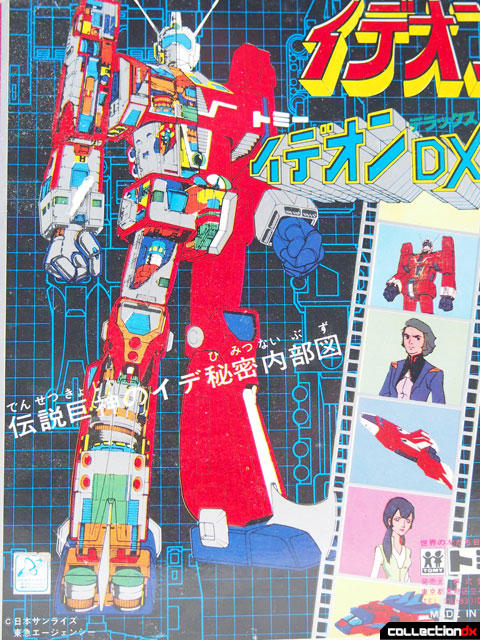 If you like metal in your toys, you will not be disappointed. This thing has a beastly amount of metal in it. It feels like a slab of iron in your palm.

The box is awesome in it's own way. It's loud and annoying, but it fits in with the 80s aesthetic. All of the hallmarks are there - the naive airbrushed art of the character on the front, the electro-grid lineart background, and even the half-translucent cutaway drawing on the back. 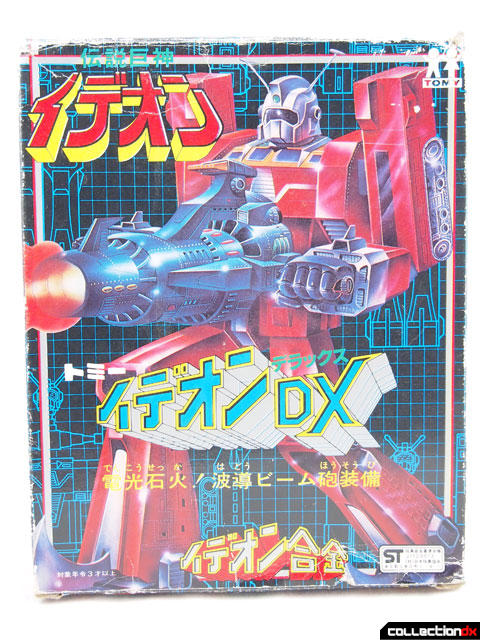 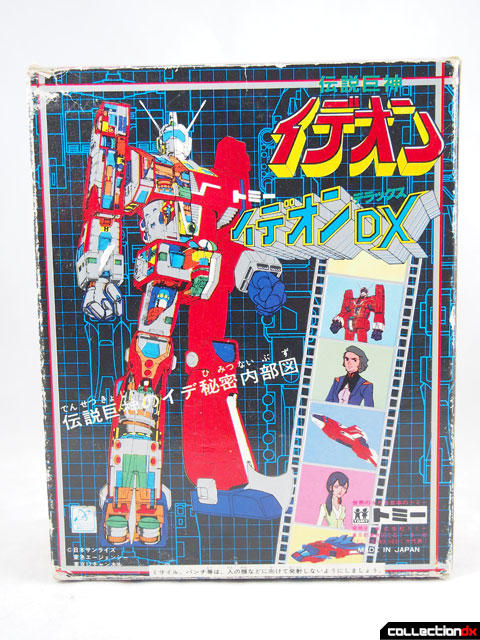 Inside is the styro tray, cradling the gloriously heavy Ideon. 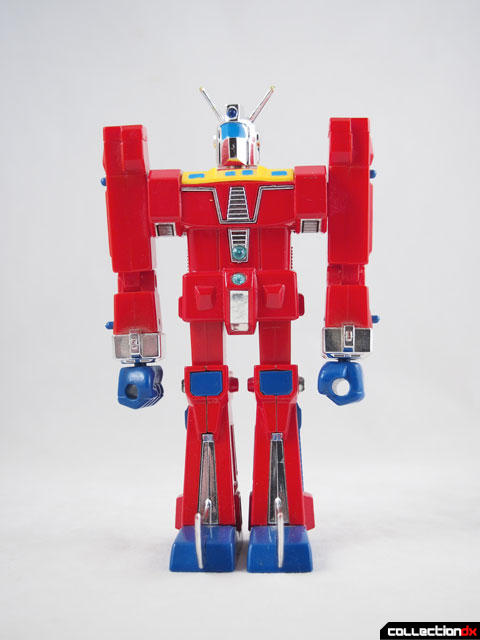 Lets be honest here, the proportions on this Ideon SUCK. He looks like a big goofy red gorilla. If you want anime accuracy, go get the Yamato. This here is all about the TOY. Kids back then did not care about anime accuracy. They wanted a fun toy that did stuff. 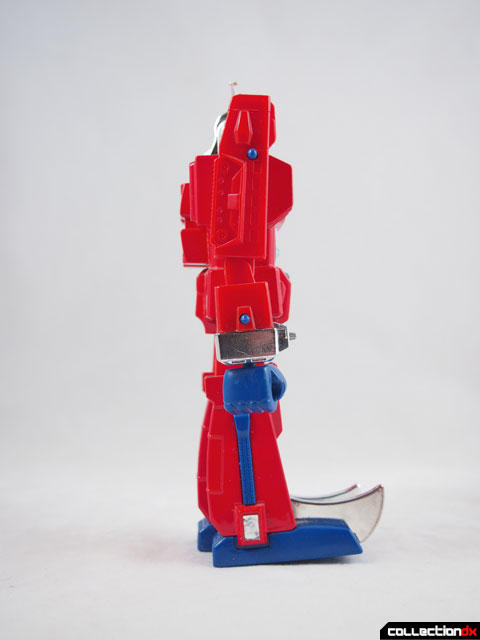 This toy does stuff. 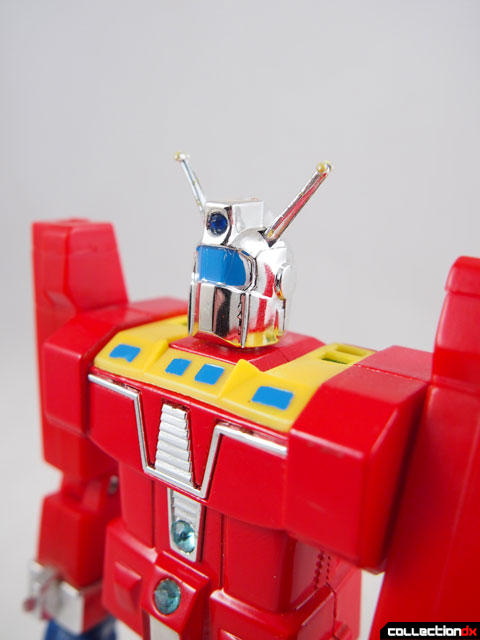 It moves pretty well, all things considered. It's so very heavy that it anchors itself well to the ground. 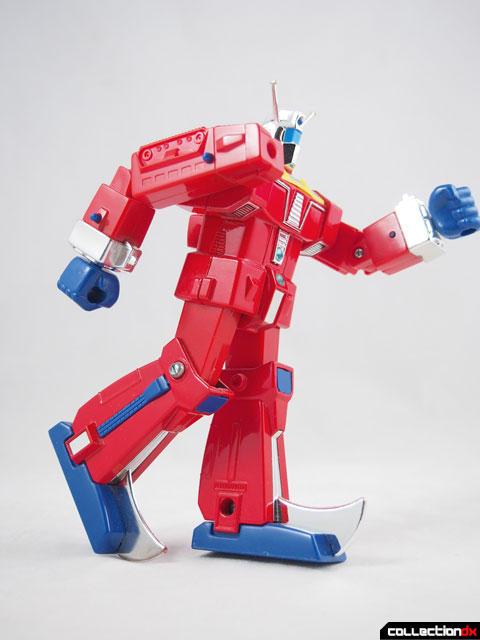 The fists fire, and you can replace those fists with missiles, which also fire. 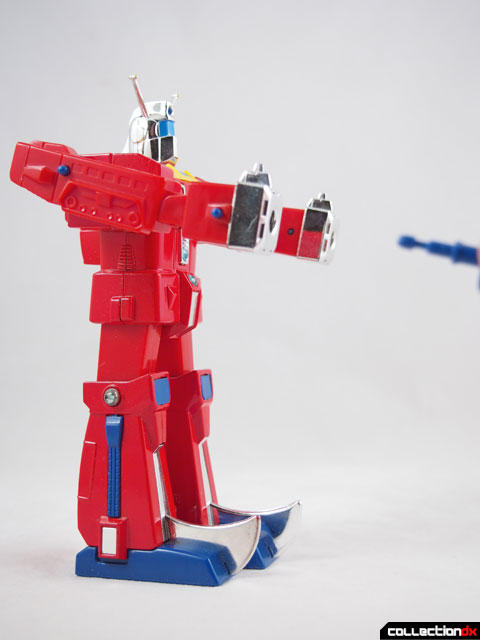 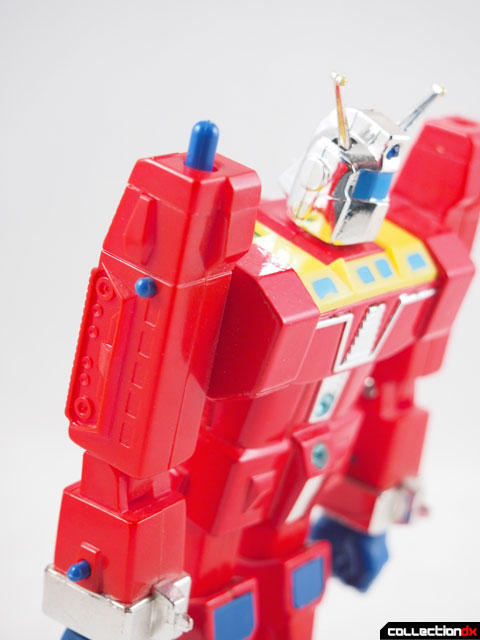 Do you like chrome? Of course you do. In addition to the incredibly inaccurate chrome head, you also get two chrome guns that mount on each shoulder. They don't shoot anything, but they do look cool. 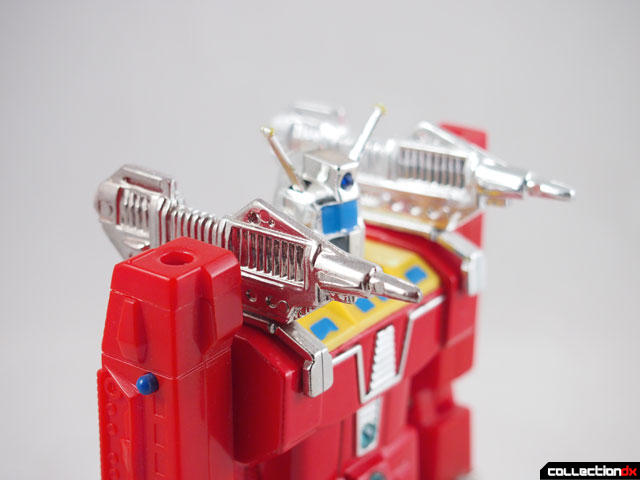 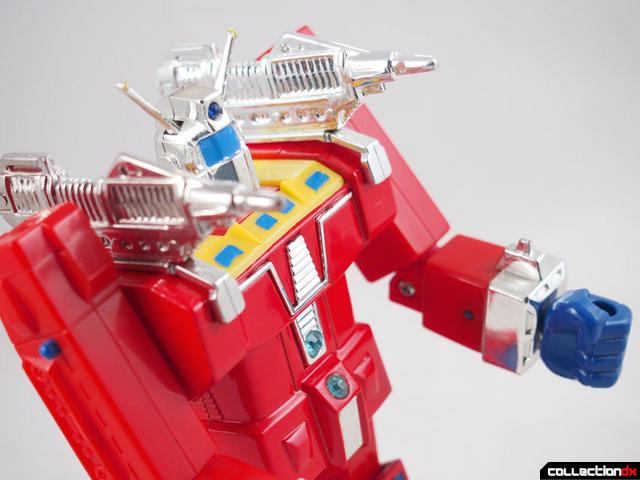 Not enough firepower? Fear not, because Ideon comes with the creatively named "Ideon Gun". This large gun is held in both hands and also clips to the waist. 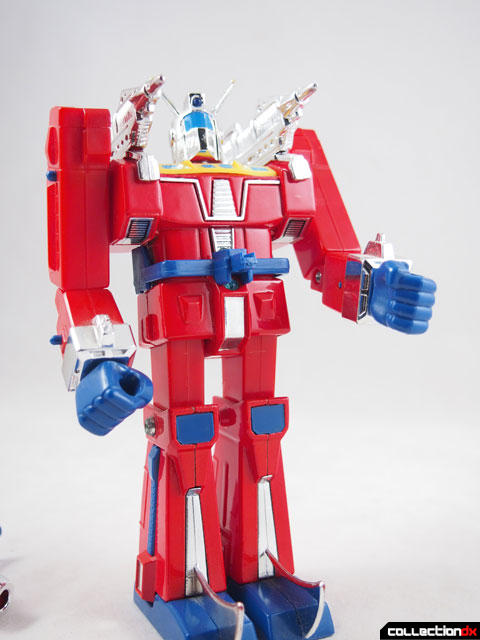 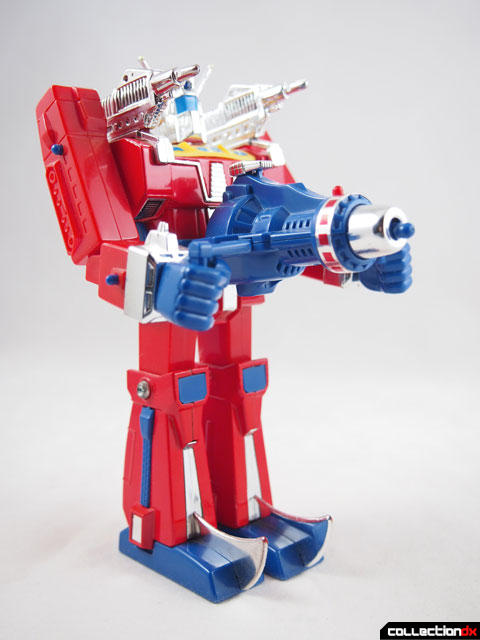 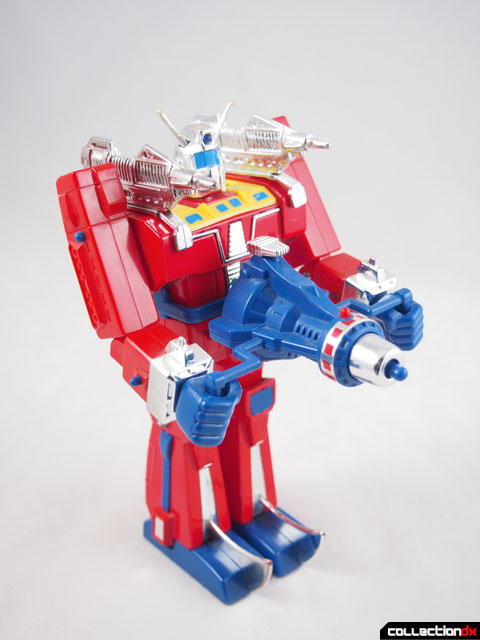 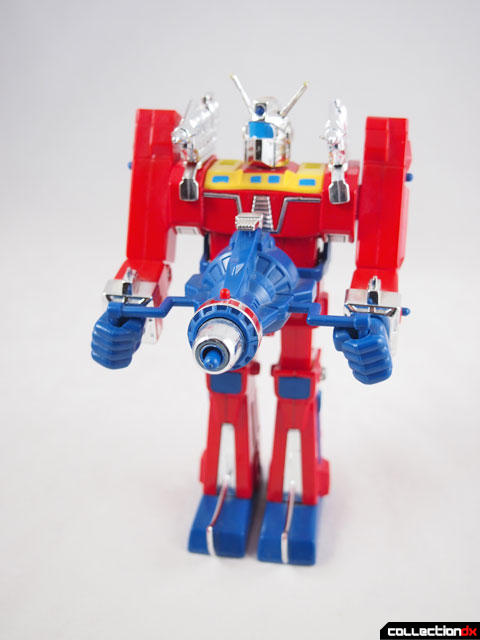 With a press of a button, Ideon can fire the tiny missile out of the gun. Kind of underwhelming for a weapon that is supposed to destroy planets in the anime. 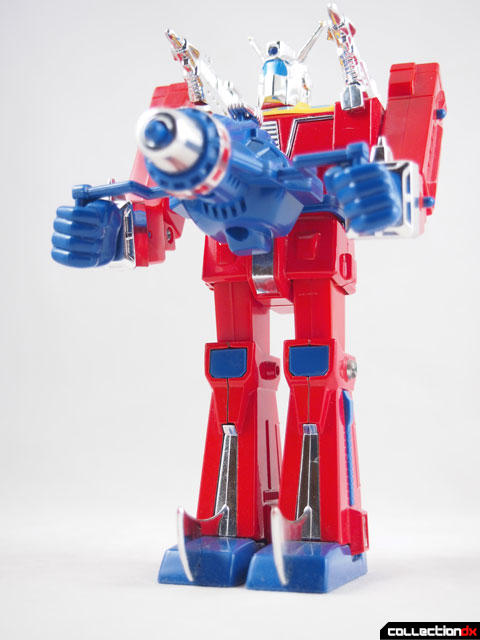 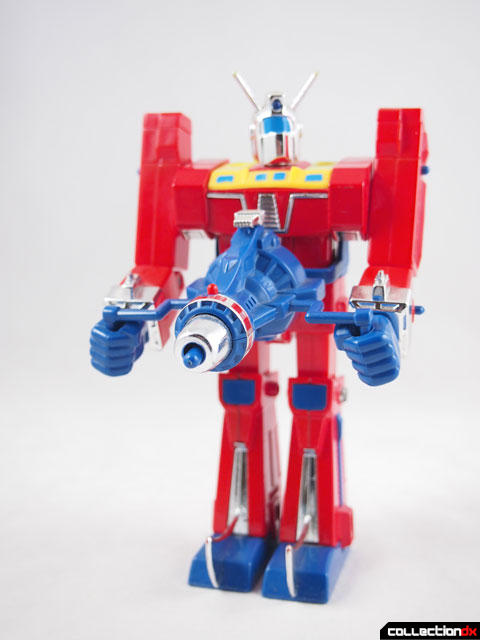 It's a wonderfully funky, simple piece. 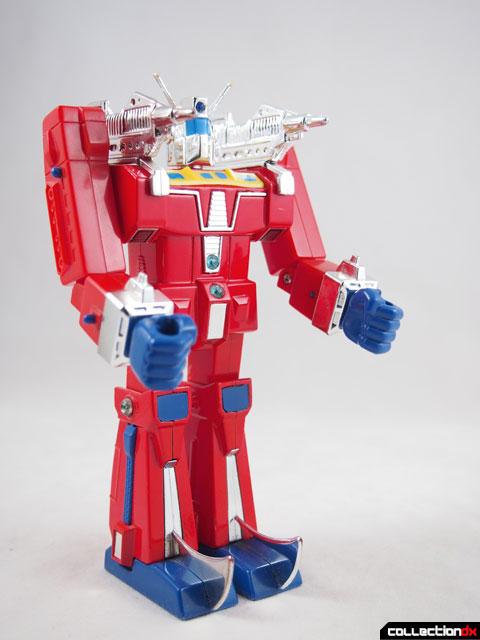 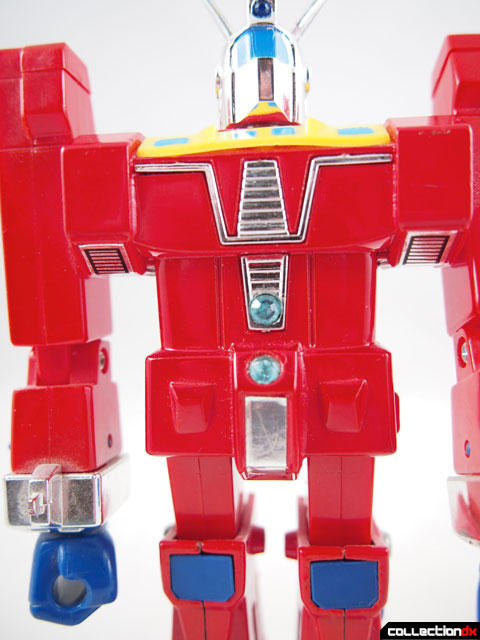 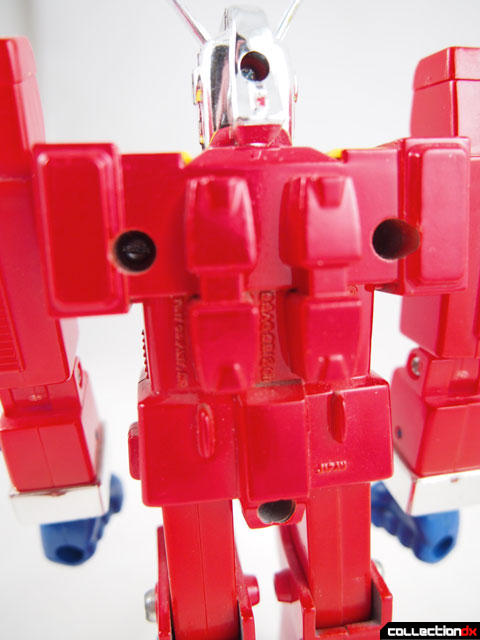 6 comments posted
I wish toys had box art like

I wish toys had box art like that nowadays.

So this isn't the combining one they did.

I feel the same...it makes me sad...lol
Memories are always beautiful, unless you open the box of memories.

Is Kogawa still alive? I haven't seen his name on anime since Dunbine, in 1983.

Such funky proportions! Ideon is perhaps one of the great overlooked "key" anime series - I would be very surprised indeed if Hideki Anno didn't take a few things from it when he was coming up with "Evangelion".

Japanese children around that time ignored the series, except deep fans of Tomino - they were teens.
We kids were just involved in Gundam, enjoyed SpidermanRobo, and glued to camel-toe in Crusher Joe The Movie.

The story was a typical Tomono work, ironic and cruel...for kids, that was too strong, I suppose. I believe works of Kogawa Tomonori was great - he drew beautiful lines of characters. But Tomino said "Ideon ...bad design works by Submarine, that was failed. Just big red GIM"

Zanza-lubu was one of Tomino's great designs....full of cubic curves.
(refer: Wonder Festival 2007)

With a slab of Die-Cast metal XD

it looks like a cool toy IMHO. All of that gokin....