First, I want to apologize for the condition of the toy that I’m going to review. I received this one from my mother (thank you mom) around 1984. It’s over 20 years old, so the condition may not be to good. But at least it’s still intact, eh. 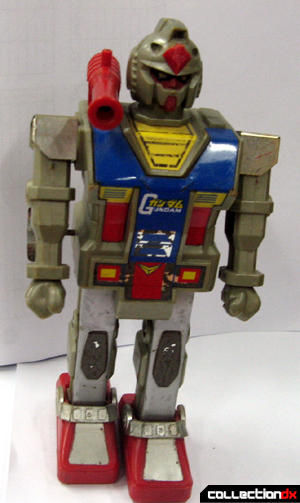 Let’s start, shall we? This is a Clover made Gundam toy. Basically, it’s a windup toy with Gundam character. The Gundam itself is the RX 78-2 Gundam. The main character from the first Gundam. 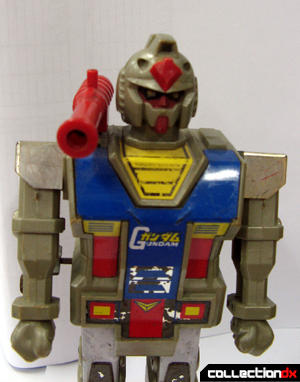 It made mostly from ABS Plastics with tin covering for the body and kind of Iron plate for the shoulder and knee. The plastics is strong enough to withstand hard beatings. It had a shield that you put in the left arm and it’s made of tin and iron. Unfortunately, I lost it, so I can’t show it to you. I think it is about 75% plastic, 15% tin and 10% iron. 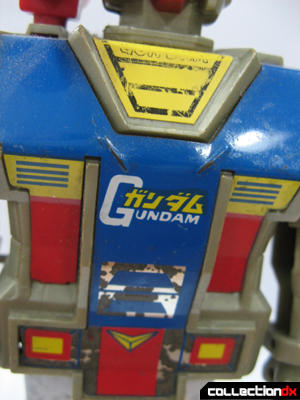 They toy itself had a blocky look. Although very uncommon these days, it is the standard for 80’s toys. But the blocky look is what attracts me (maybe some of you) to collect vintage toys. The sculpt and the paint although not Anime accurate, succeed in bringing the Soul of Gundam. It also had what vintage toys should have, It’s name written in the chest. The details are a far cry from today’s Gundam kit or figure, but, again, it is a vintage toy, so it’s forgivable. It has wheels in it’s feet for the walking mechanism. The wheels made of plastic.

Considering the material, it’s not a Chogokin. But the love magnet of this toy is not the diecast part. As I mentioned before, it’s a wind up toy. So, after you turn the knob, watch as the mighty Gundam walks with glory across the battlefield (or your room). Beside the walking feature, it also has a shooting feature from the Bazooka that it carries on it’s right shoulder. It is supposed to imitate the Bazooka that Gundam uses in the Anime. 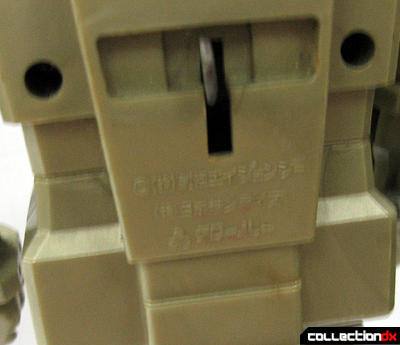 The bottom line… this is a simplistic toy that is what a toy should be about. Endless hours of play value. Imagine having it walk across the room, and stop just in time (there’s a lever to stop the toy) to shoot your enemies. Also it doesn’t disappoint us collectors. A truly must-have for toy enthusiasts or just Gundam fans.

I actually saw one in nice condition on eBay maybe six months ago...I forget how much it went for, but it was a lot! That's great that this is actually from your childhood, though! Most of my toys from my childhood are long gone.

Do you have the missile for the launcher? That'd be pretty cool...

Oh, and you mentioned that the arms are articulated. Does that mean that they don't swing as the robot walks? Usually on tin walkers, if anything, only the head turns. The arms and legs are geared to move in sync when wound up.

Cool, I've seen this one a few times as well, but never bothered to grab one. I actually prefer these old school Gundam toys to the newer models and such out these days, too. Which reminds me, I've got a junior machinder around here I've been meaning to review forever..... Thanks for contributing!

It's all about the blockiness!

@ Sanjeev:
Yes, the hands move because of knob wind up backwards (Spring mechanism) and kind a "rotating" the arms. My Missile is gone, but I will keep looking for it. Maybe it just pop up, We'll never know, eh... Talking about pop up, This toy had been in my attic for years, I guess old school toys are made to survive the time...
@Nekrodave:
Yes, I kind of "feed up" with these sleek Gundams, maybe I'm just a little bored.
@Goldenage
Blocky Robots Rules!!!

Thanks for the comments