The Shogun Action Vehicle Shigcon Jet is a re-branding of the Popinica PB-13 from Popy and originates from the show Daitetsujin 17. It is a companion piece to another Action Vehicle, the Shigcon Tank. According to the guy in the following commercial, the "c" in the word is essentially silent.

I bet that this is one of those toys that I would have enjoyed much more as a child than I do now. My imagination back then would have been more likely to run wild and I would have actually played with it. As it is now though, since I have no attachment to the source material and the toy doesn't wow me in and of itself, it really just represents a mark on a checklist for me. Just one fewer Shogun branded item I need to add to my shelf. Yes, I realize this is kind of sad. 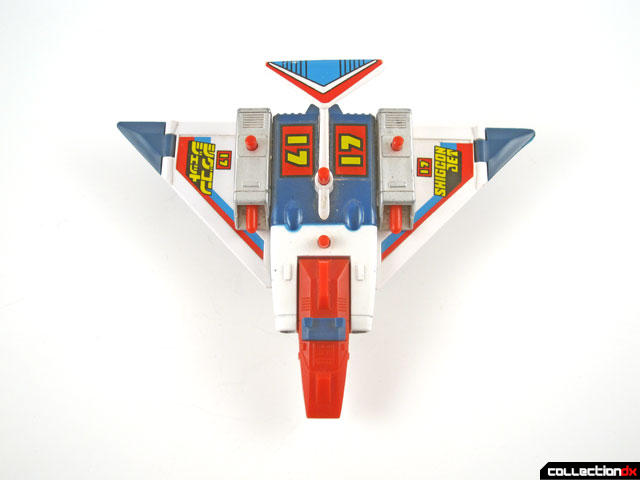 The Shigcon Jet is obviously an aerial vehicle with a 6.5" wingspan but there are a few surprises hidden in it's otherwise nondescript appearance. First off, even though it's not mentioned or depicted on the box, there is a retractable panel that can be pulled out of the nose of the ship. I'm not exactly sure what this is meant to represent though, having not seen the show. 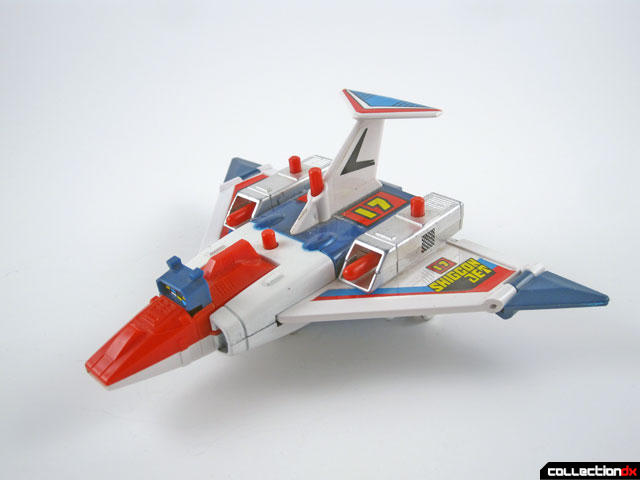 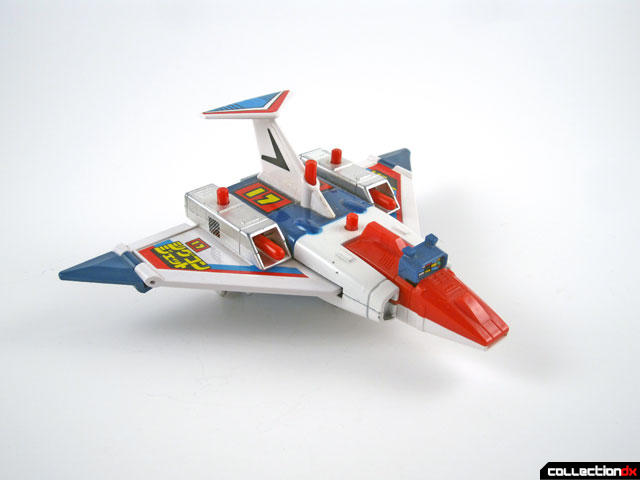 Next, of course you can fire the missiles from the silver holsters positioned on the inside edge of the wings. The outside edge the wings can also fold up, providing a 4th and 5th pair of wheels that I suppose can help out on those extra treacherous touchdowns. 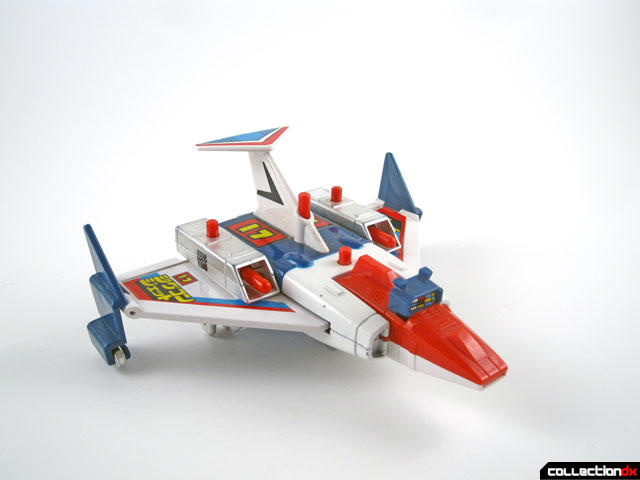 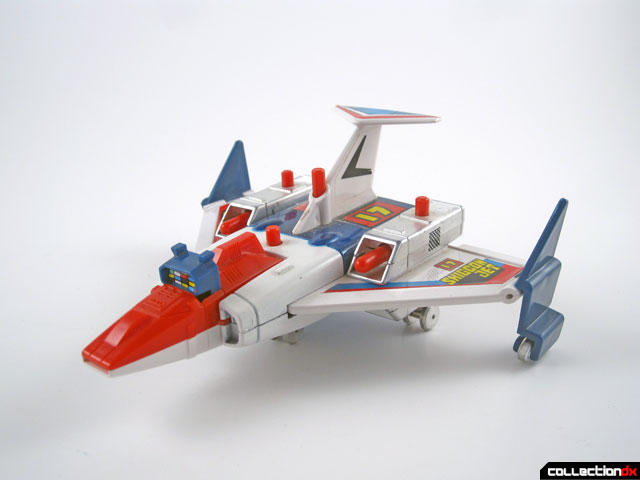 I think those wingtips are best left lowered for the next gimmick though. Pressing the red button on the bottom of the tail fin causes the wings to swing backwards and form one large wing at the rear of the vehicle. Again, I'm not sure exactly what this accomplishes. Perhaps the Shigcon Jet doubles as a land or even water vehicle in a pinch? 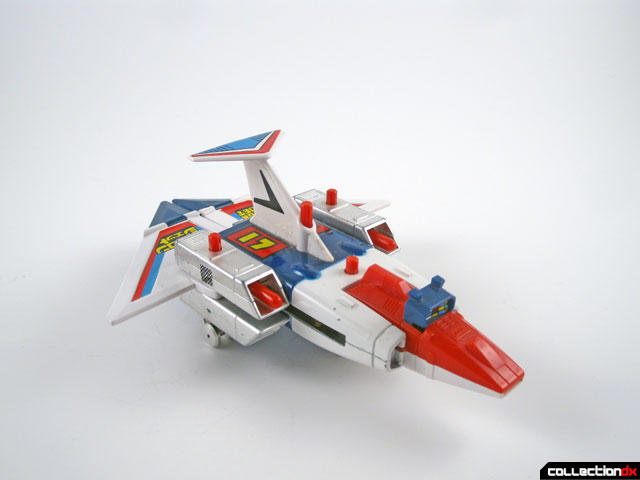 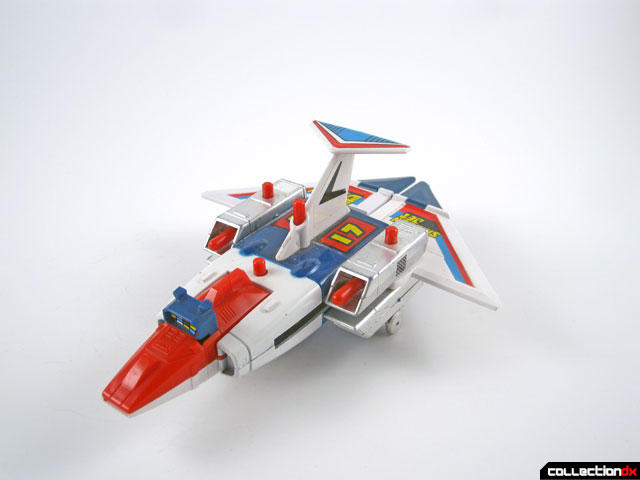 Lastly, it's got one more trick up it's sleeve. Much like the infamous Sky Arrow (review forthcoming, I promise!), this vehicle can launch it's cockpit with the press of a button; the little red one behind the red nose cone to be precise. 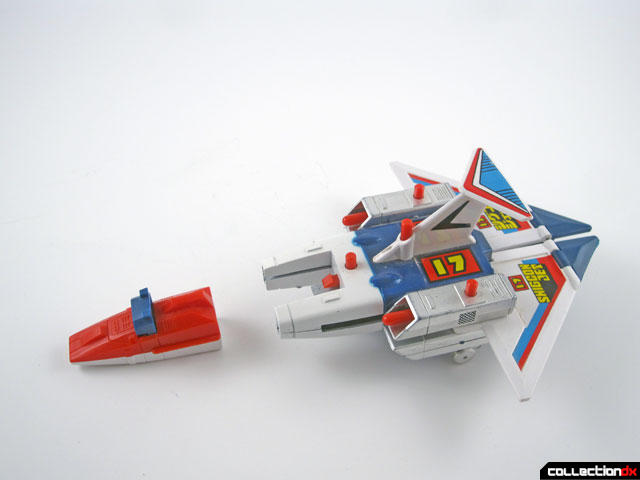 I'm probably being a little harsh on the toy. I'm sure kids of the day would have loved it but for me now, it's all about the box it came in! 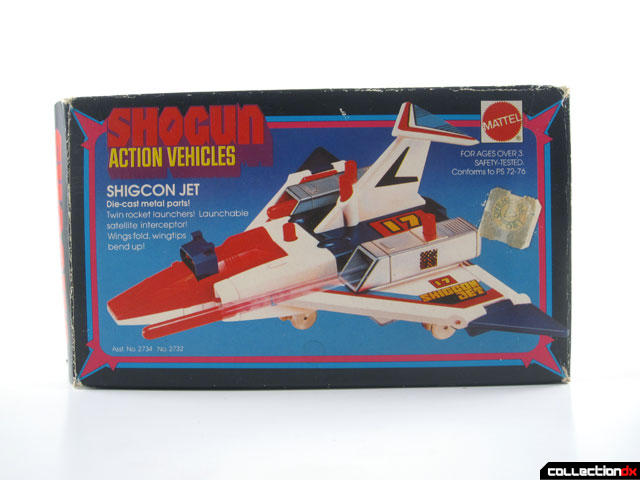 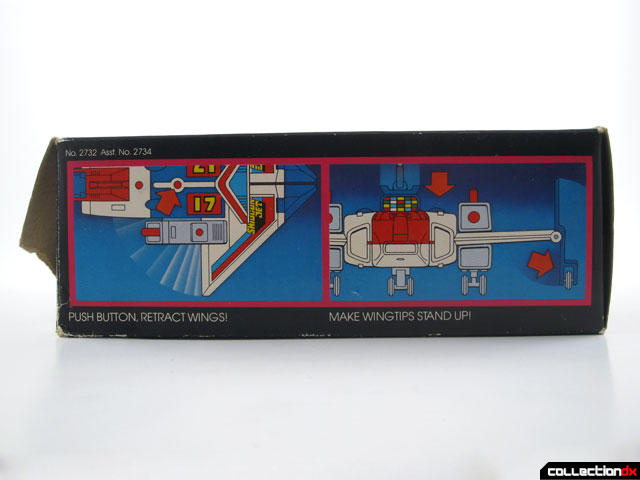 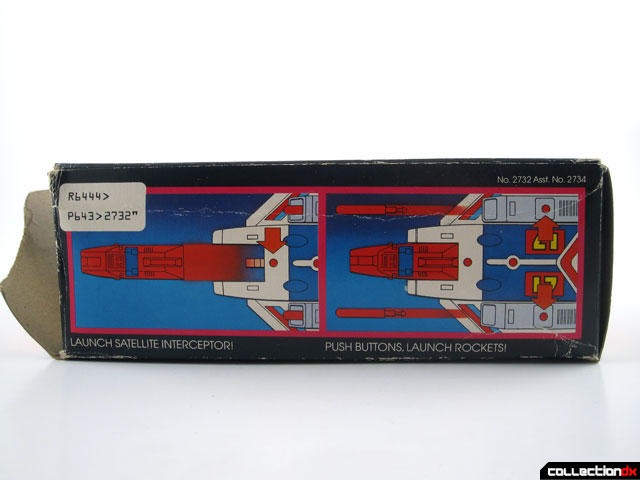 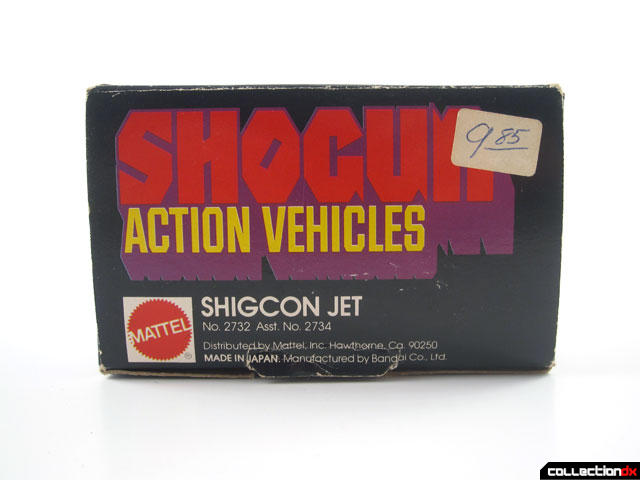 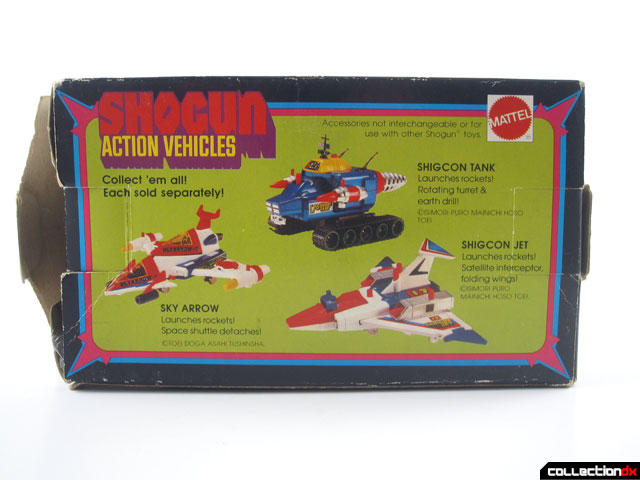 The Shigcon Jet, like the Shigcon Tank's appeal really depends on the whole Daitetsujin 17 aesthetic... if you like that robot's design (or warm up to it) - than the style of these vehicles make a bit more sense. For example... the retractable panel in the cockpit mirrors the looks of the "eyes" of the D-17 (as do the cockpit part of Shigcon Tank) - are they connected by the same computer brain that run the robot?

Not that they aren't fun and full of play features by themselves. Yeah, that whole wing retraction thing doesn't make much sense if you haven't seen the show (I think I've seen about 4 dubbed episodes of "Brain 17" and don't recall the Shigcon Jet getting much action) but it's still a neat spring loaded gimmick. It's old skool and "they don't make em like these anymore" enough to recommend any gokin collector to grab one for cheap.

Perhaps my favorite part of the more electronic Bandai D-17 gokin (with the woeful self transforming mechanism) were the nicely detailed little Shigcon vehicles that docked in it's foot.

Really like these reviews, all I had growing up was the old shogun warrior adds in comic books, never was able to see and have the real things.

But how awesome is that commercial!