Any warm-blooded kid over the age of about 30 is likely familiar with the classic Kenner Star Wars action figure line that debuted in 1978 and had a lasting impact on the toy industry.  Outside of the United States, however, there were toys released by companies other than Kenner that are also really terrific.  You may have heard of one such company, none other than the Japanese titan, Takara!  The most prolific and common Takara-made Star Wars toy is a wind-up R2-D2 that is around the same size as the Kenner release and was available in Japan and Canada.  The toy is all plastic, and who has time for that?  Where Takara really flexed their creative muscle was in a brief line of proper chogokin Star Wars figures made on a larger scale than the Kenner toys.  Info and pics of these toys can be hard to find, with the best English-language write-up appearing in the final issue of Super7 Magazine (now available for free here), but even that has hardly any photos of the toys.  I’ve been working on collecting this line, and next up for review is the main man himself, Darth Vader.  My goal with these reviews is to provide some much better pics of the toys than have been previously available, and to showcase how darned cool they are! 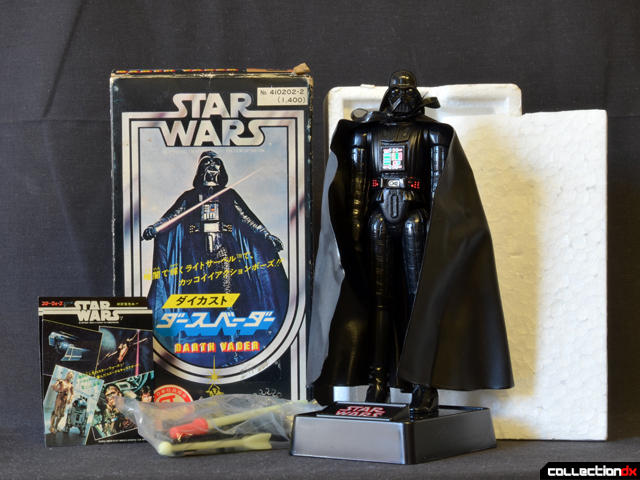 Takara’s diecast Darth Vader comes in a printed box that features painted character artwork and a design treatment that matches the Kenner toy cardbacks that 3 ¾” figure collectors will be familiar with.  Included in the box are the figure in a styrofoam tray with lid, a display stand, and baggie of accessories, and the small pamphlet showing off Takara’s other Star Wars offerings. 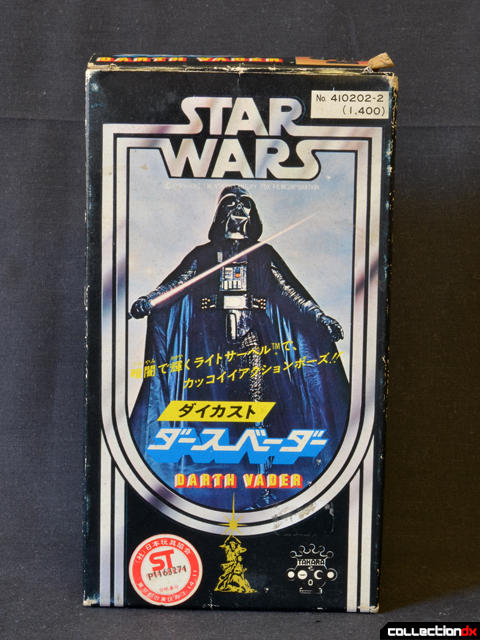 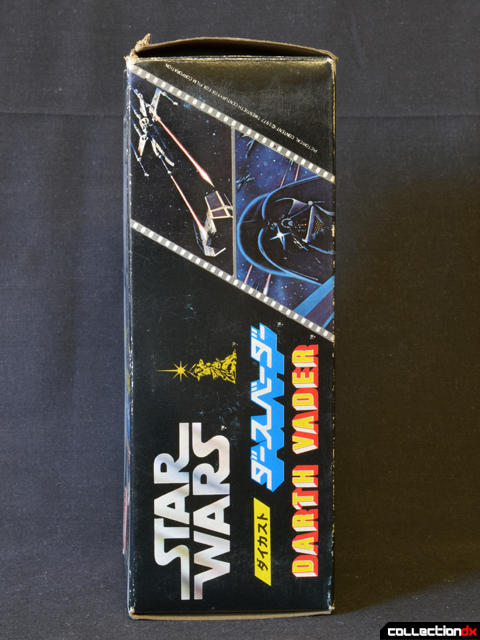 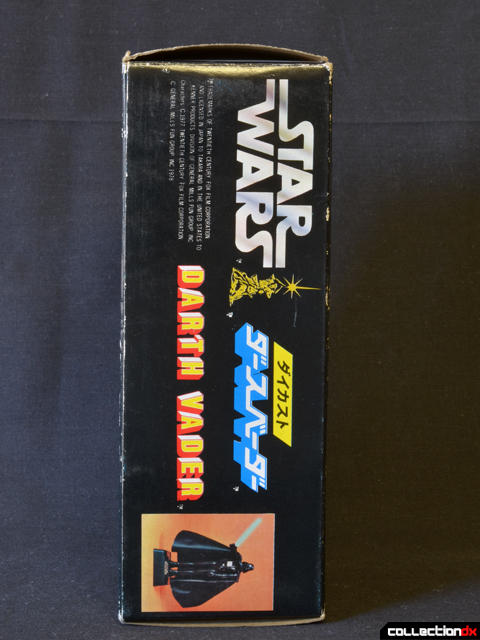 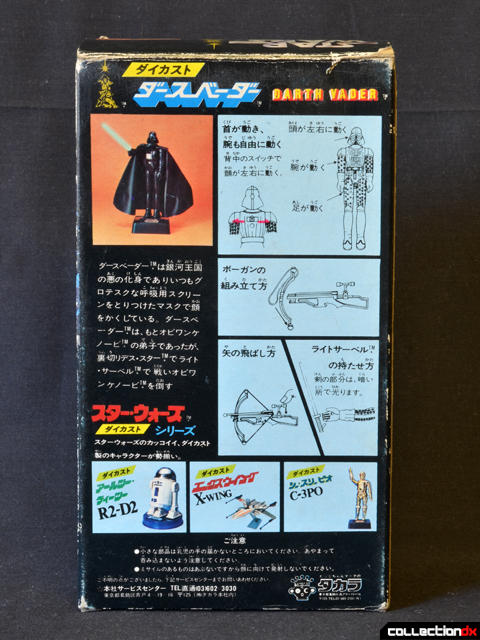 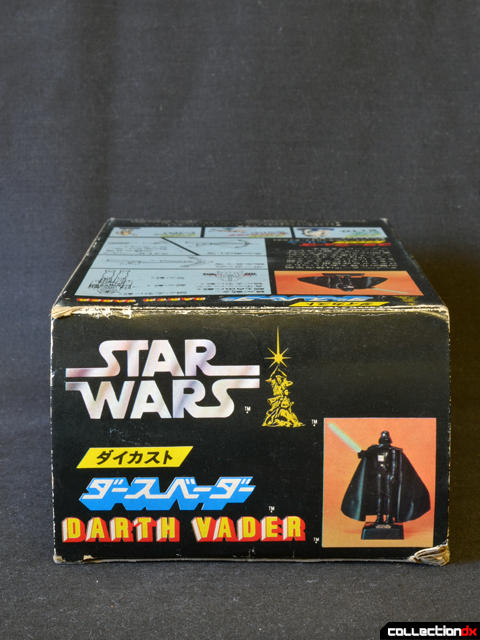 Here’s a full turnaround of the box.  The top and bottom lids are printed the same.  The price tag is a printed feature on the box, listing the original retail price as ¥1,400.  The instructions on the back show that things are going to get a bit weird. 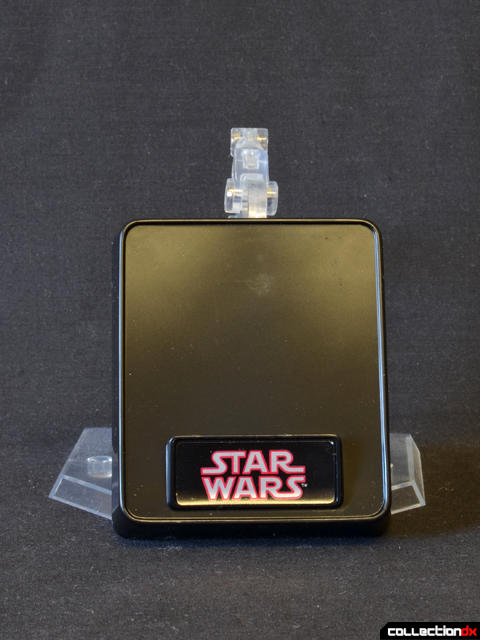 Vader comes with the same display stand as the diecast C-3PO did.  This one looks unused, or close to it.  These display bases are so classic Japanese robot toy, and I love the air of elegance that they add. 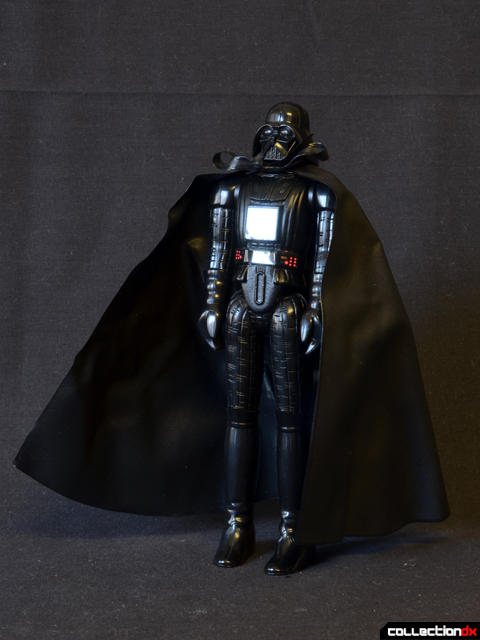 Out of the box, Vader stands about seven inches tall.  The torso is made of diecast metal, with plastic limbs and head.  The cape is made of vinyl and ties around the neck.  I find the tie to be a little distracting and spend a lot of time futzing with it, but I don’t want to pull on it too hard for fear of tearing it.  Still, the vinyl seems plenty supple after all these years, and feels more in scale than the cloth goods on other figures from the time did. 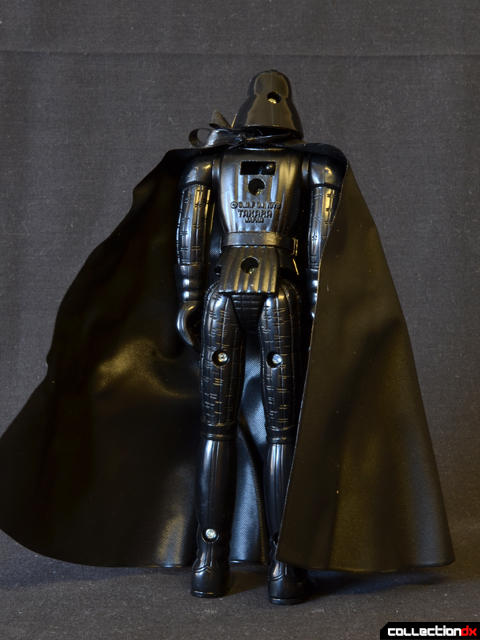 On the back, Vader features his Country of Origin (COO) and one action feature lever.  The COO reads ©G.M.F.G.I. 1978 TAKARA Japan.  GMFGI stands for ‘General Mills Fun Group, Inc.’.  The lever is linked to Vader’s neck and makes the head turn. 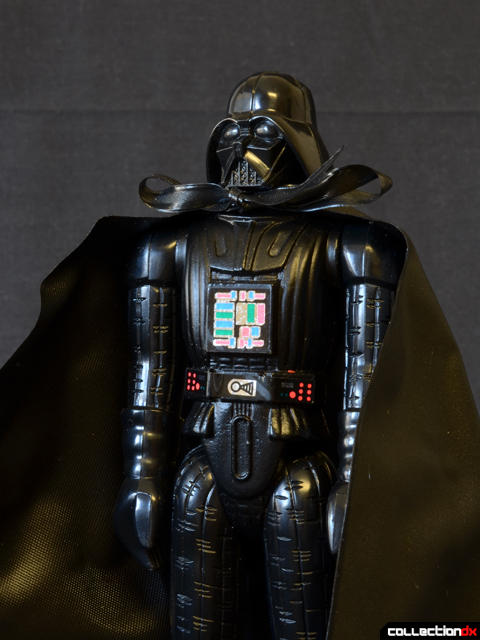 The toy is cast in black plastic, with a black painted metal body.  The only decoration are a couple of foil stickers on his body to represent the controls and diagnostic displays of Anakin Skywalker’s suit’s life support systems.  The bright colors and metallic sheen make these details really pop against all the black. 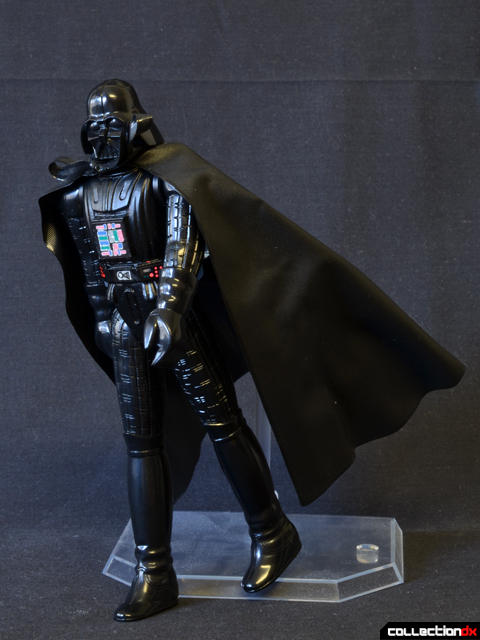 Takara’s Darth Vader features five points of articulation, same as on his Kenner contemporaries.  I really wish he had elbow articulation like the diecast C-3PO does, but the toy has really clean lines and a sharp sculpt without them.  The proportions on Vader are a bit odd, with a short torso and legs that go on forever.  I like his bulk, as it fits Vader’s imposing stature.  In a striding pose, he has just the right menace and purpose. 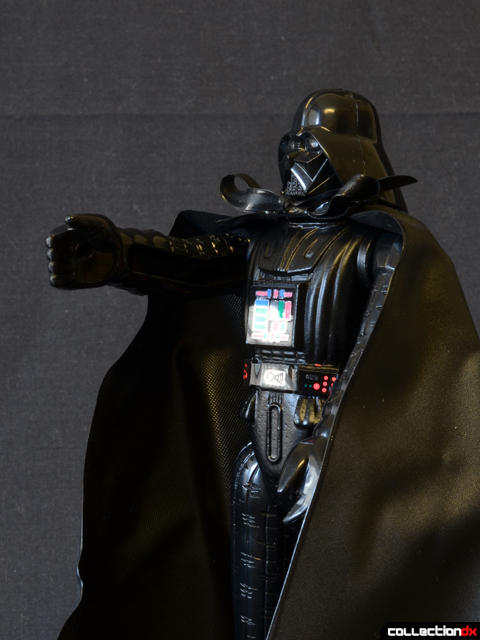 Vader’s hands have a peg hole in the side of each to hold his accessories in his big mitten-ey paws. 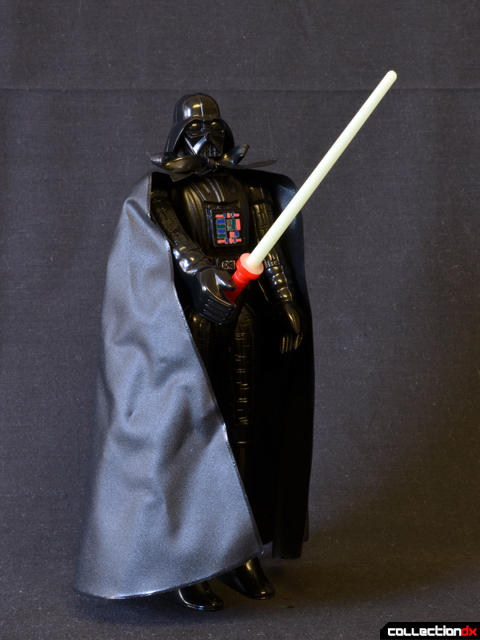 First up is Darth Vader’s lightsaber, with a red handle and glow in the dark plastic blade.  It’s awesome.  The blade glows green in the dark, but has weakened with age.  I’m tempted to cast a new one in red glow resin for a more accurate appearance. 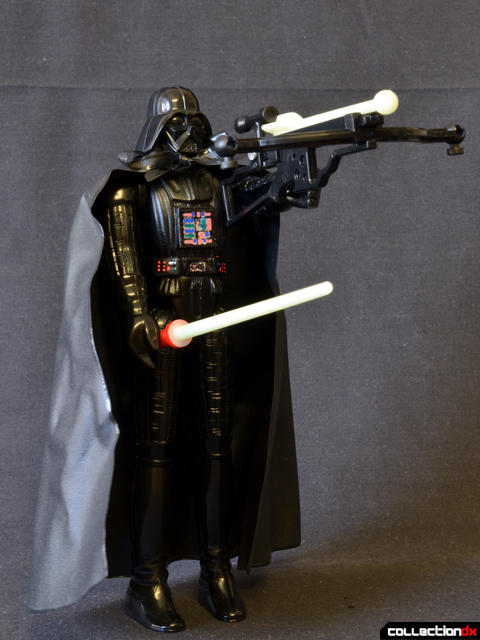 The other accessory is a bit different.  For reasons beyond my place to know, Takara included a big honkin’ crossbow.  It has a scope similar to Chewbacca’s bowcaster, but also included an elastic string that I am sadly missing.  The crossbow comes as two pieces in the bag, with the front span clipping onto the main body. 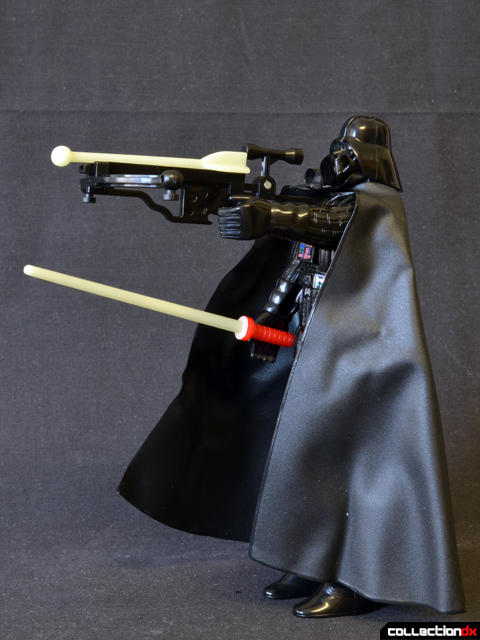 The idea is that the string hooks between the cross and latches back by the scope.  Then you can load in your glow in the dark giant crossbow bolt (!) and let’er rip!  I plan on rigging up a replacement string so I can try this out. 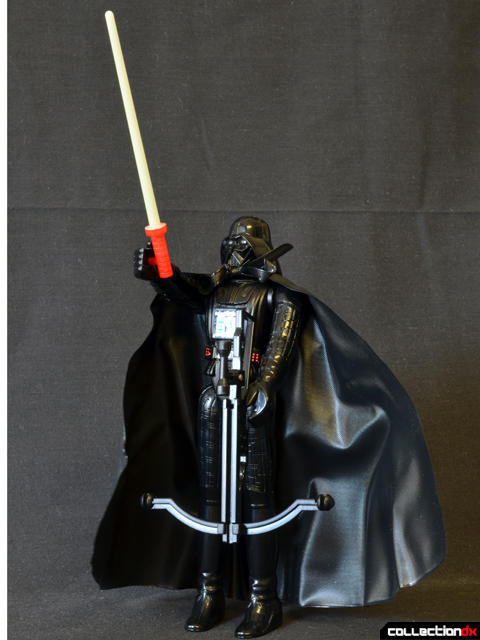 Seriously, if Vader had a big freaking crossbow in the movies, that rebellion nonsense would have been over in a jiffy. 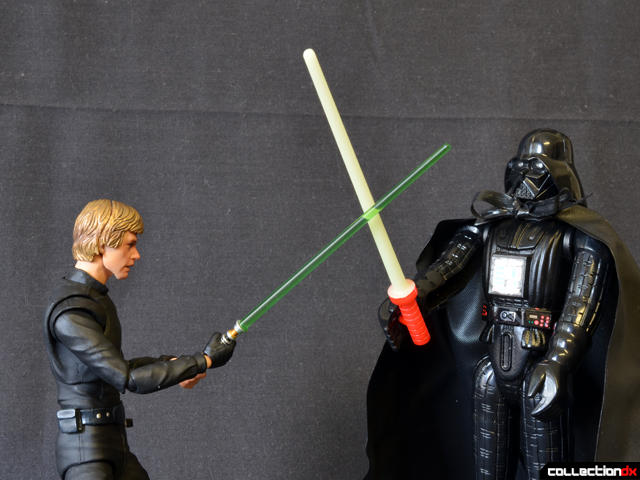 Vader sizes up nicely with modern six inch-scale figures, and makes me wish that the Takara line went deeper.  I can just imagine a diecast Stormtrooper with missile-shooting blaster rifle, or Han Solo with some kind of laser battleaxe. 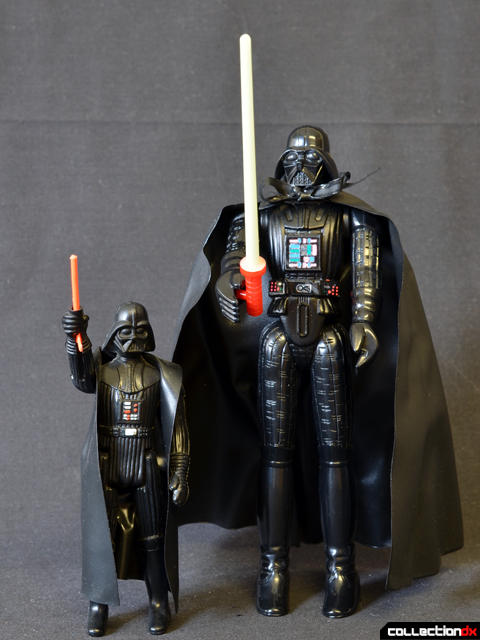 Here’s a comparison of Takara’s Darth Vader with Kenner’s release.  Other than the size different, they are actually quite similar.  Both toy makers came to very similar solutions in a lot of ways, but that glow in the dark lightsaber just can’t be beat. 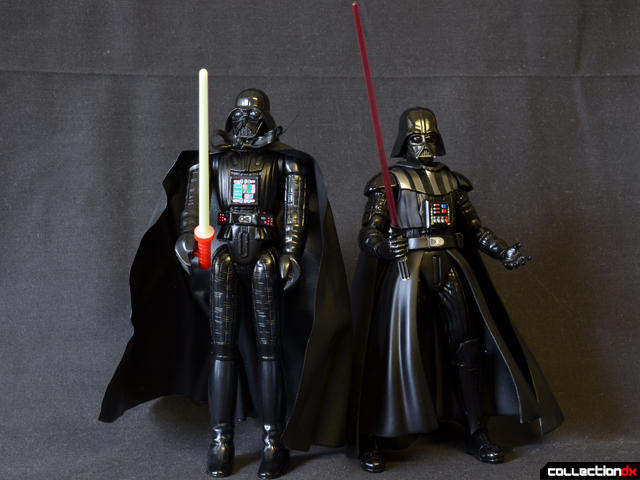 Here is Takara’s Vader with the most current Darth Vader from Bandai’s SH Figuarts line.  Obviously the modern toy has the edge in looks and articulation, but the vintage item is a fun toy made to hold up to kids’ play.  Plus, his lightsaber glows in the dark.  I cannot state enough how important that is! 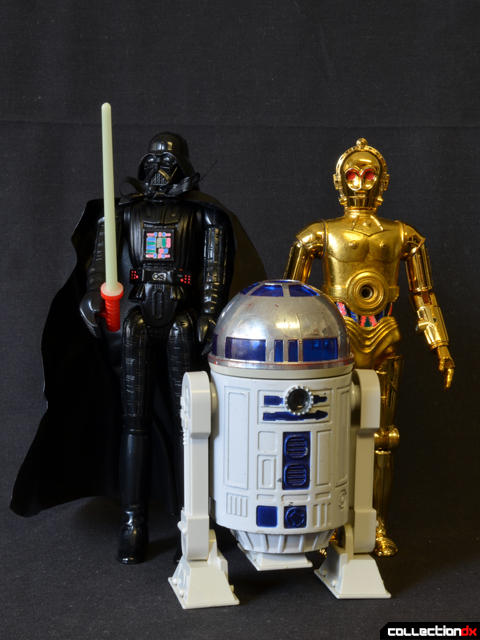 Last, a shot of the big three Takara DX diecast figures all together.  Each of these is an incredible toy, blending iconic characters with classic Japanese robot toy design to make something special.  I wish there was more to this line, because I would take these renditions over any others.  They feature wonderful accessories and the right amount of spring-loaded shooty goodness.  They feature lots of metal and are hefty, durable playthings.  Takara managed to capture the essence of each character with just the right amount of vintage funk.