Cheap, easy to produce and fun for the whole family, jigsaw puzzles are a great way for any company to promote it's brand and look to capture more of the consumer dollar. Mattel was no different and when it came to their popular brand of Shogun Warrior toys, they sub-licensed the brand out to HG Toys, a company who was prolific when it came to making oddball toys.

When it came to the Shogun Warrior jigsaw puzzles, HG decided to release them in two different formats. The first and most common were the smaller 150 piece puzzles. When completed, these puzzles resulted in a 10" x 14" image and used smaller pieces than the other version. There were three puzzles of this type made, featuring the characters Great Mazinga, Dragun and Raydeen, in Jumbo Machinder form. These came in boxes that measure approximately 11.5" x 7.5" x 1.5". 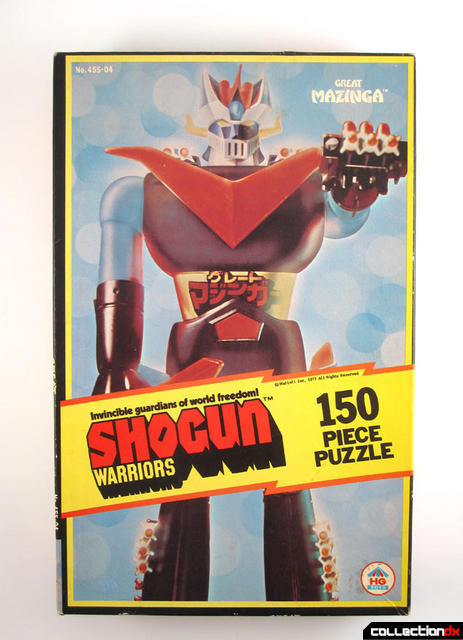 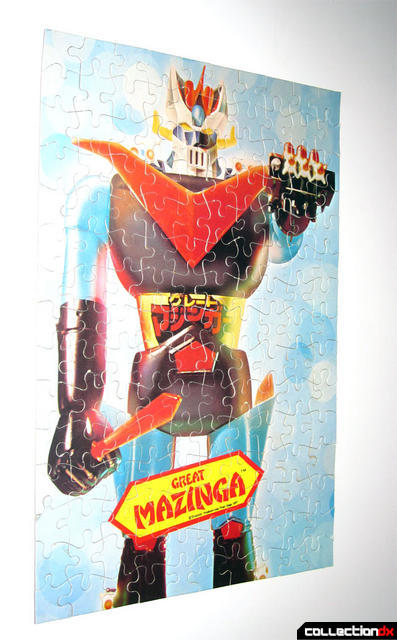 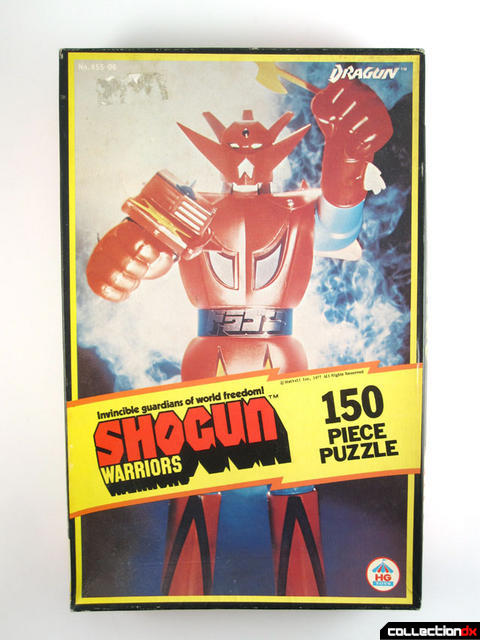 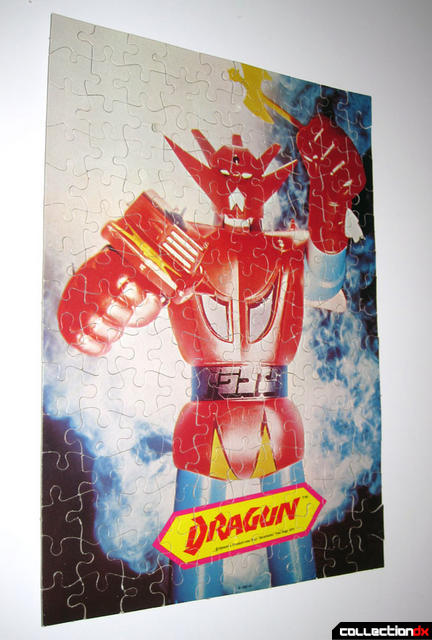 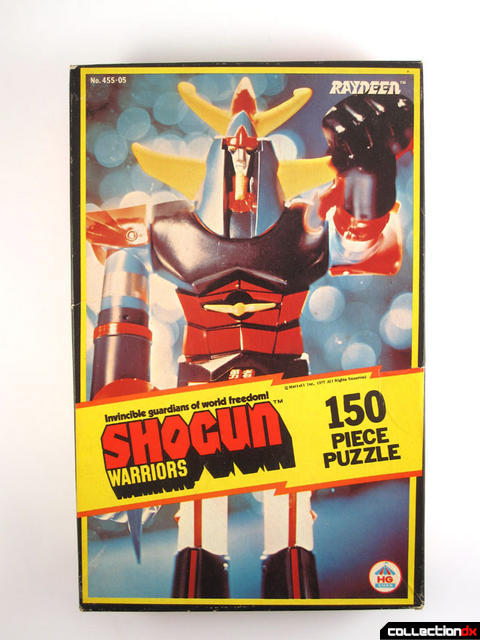 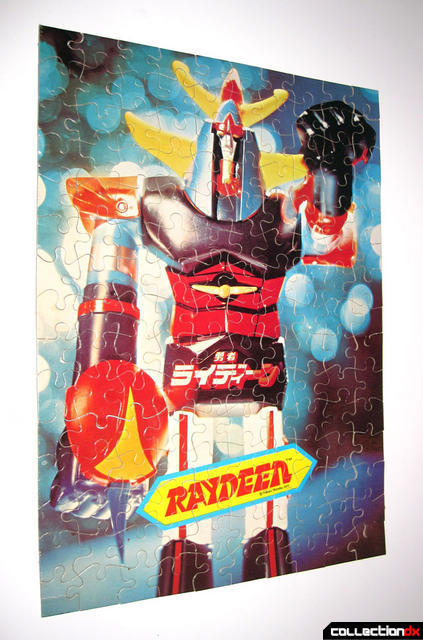 Above are the commonly seen puzzles that were released in the US, but in Canada at least Great Mazinga was also released in a box variant. This one has a different design and is printed in both English and French. It was a Mattel/HG Toys/Frolic co-production. If characters other than Great Mazinga were released above the border, I have yet to come across an example of one. If you've seen one, let me know. Better yet, if you have one, sell it to me! 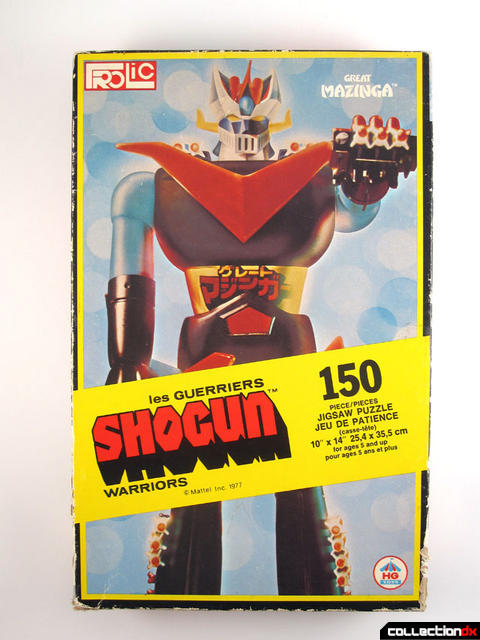 When lined up together, you can clearly discern the difference in the box design. 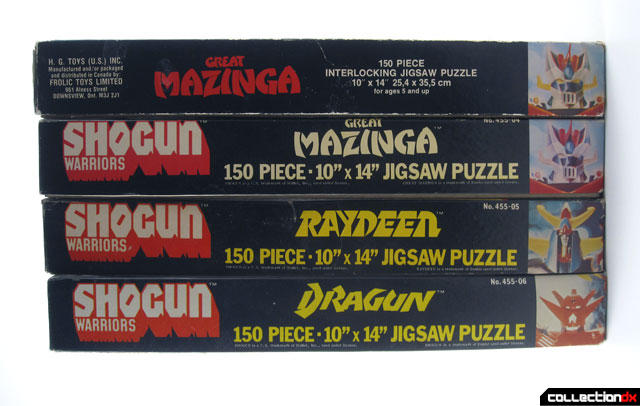 The second type of puzzle that was released was a much larger puzzle that includes all three characters in one image, although Great Mazinga holds the distinction of being most prominently displayed. This puzzle, while much larger than the others at 14.5" x 36", actually is comprised of fewer pieces, with only 100. Obviously, the pieces here are much larger, "GIANT" pieces. The box for this puzzle is much taller than the others at 19" tall. The other dimensions remain the same. 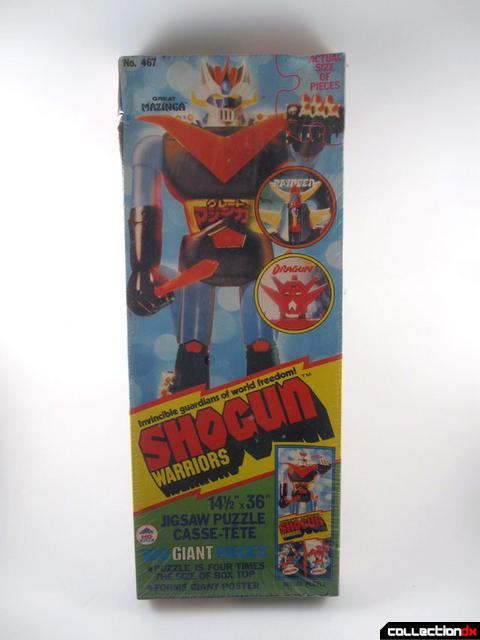 I am not including an image of the completed puzzle here because not only is the actual image shown on the front of the box (except that the blue border is not on the puzzle), but this example, which I was lucky enough to acquire at the 2012 East Coast Summit from our own repairtechjon, is still sealed in the original shrinkwrap and of course I have no intention of opening it.

While a few of you may think a "review" of jigsaw puzzles may be a bit silly, I think it's important to document what exactly was made so that future Shogun collectors will have an idea of what to look for when they set out to complete their collections. Most people know that there are puzzles, but I don't think there is another online reference for exactly what was made. So hopefully this will be of some help to someone.

3 comments posted
This is what the invincible

Wow, these are so disappointing. I mean, you'd think they'd at least come up with some kind of an illustration but nope, it's just a photo of the toy...the toy you could have instead of a crappy jigsaw puzzle.

It's like these exist as an extension of the pricetags to taunt all the kids who wanted the toys but couldn't (or rather, their parents wouldn't) afford.

It's funny. This post got me thinking about which Shogun toys actually do have original artwork. My initial thought was none, but the inflatables, Colorforms, Ben Cooper costume and Zargon all do. And of course, the coloring books. But beyond that, most of the toys just have photos on the boxes. At least on the fronts.