Nesser (or Nessar) is one of the three support mecha that fly alongide the Daikyu Maryu and Gaiking mecha in the 1976 anime "Daikyu Maryu Gaiking". 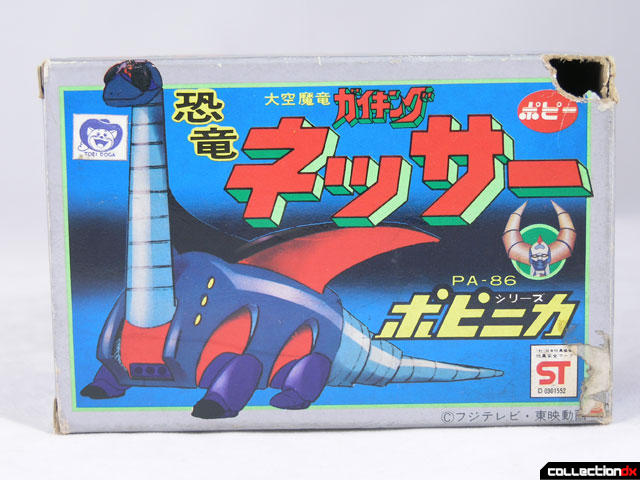 Nessar was an aquatic mech piloted by Bunta Hayami, the "Big Guy" of the crew of the Daikyu Maryu. There's always one in every crew. Being a big guy myself, the inclusion of these characters in these shows helped me identify with the Japanese shows moreso than their western counterparts. 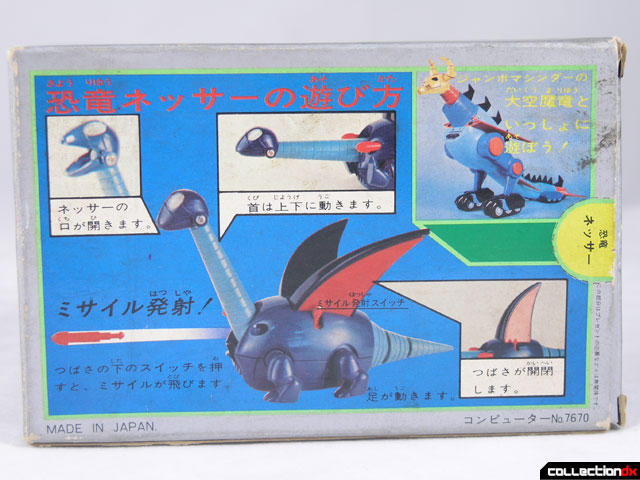 It's no coincidence that Nesser resembles a Plesiosaur. The Loch Ness Monster is thought to be a Plesiosaur, and is nicknamed "Nessie". Get it? 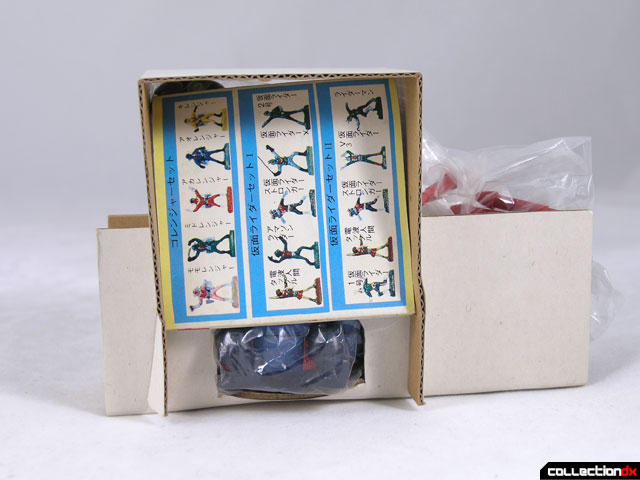 This little diecast toy was released by Popy in 1975. A few years later it was repackaged and released by Mattel as part of the Shogun Warriors line. 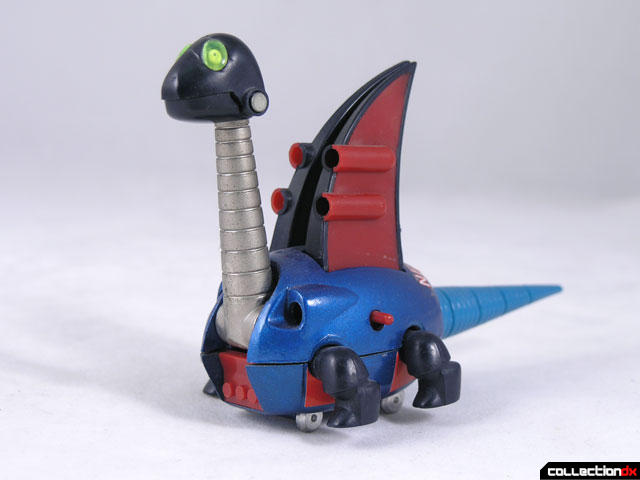 Lets face it, this little guy is cute. As fearsome as Gaiking was with the giant skull on his chest, the Nesser, Bazolar and Skyler are the cute kawaii mecha that kids can relate to.

As part of the Popynica line, you would expect that there would be metal, and Nesser does not disappoint. The body and neck are solid metal. The body is that funky metallic blue, with the completely non-anime accurate stickers, blaring the characters name in all its 70s goodness. There are wheels on the bottom of the body, enabling Nesser to roll around. 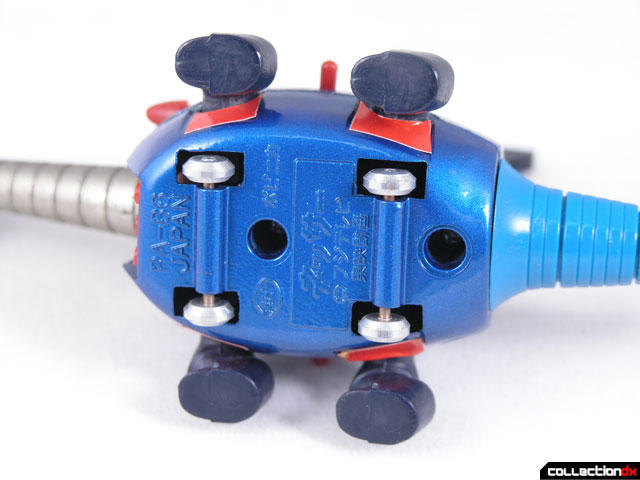 While we are on the body, lets talk about the wings. The blue plastic wings are lined with red plastic. Each wing has spaces to store extra missiles. These do not fire. On the inside of the wings are more funky yellow stickers with Japanese Writing on them. 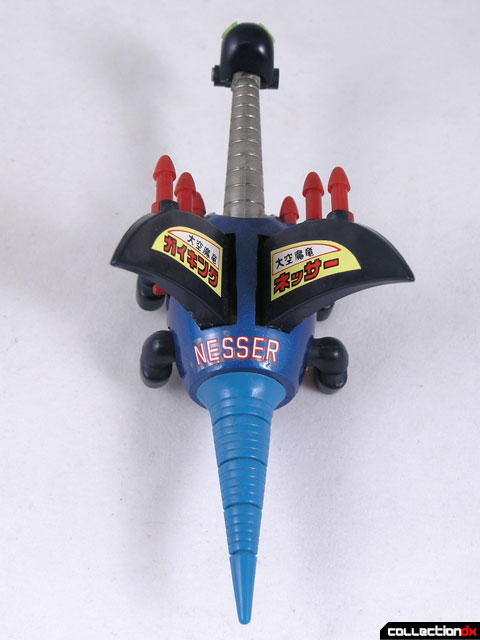 There are, however, two missile launchers in the body that are activated by pressing the red buttons on the sides of the toy. 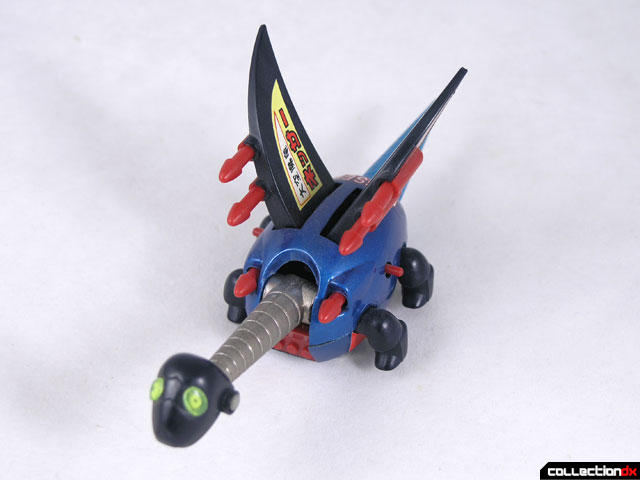 The neck is jointed at the body and at the head, enabling you to position it straight ahead. With the head out, the wings out, and the feet turned up, Nesser turns into a sleek flying or diving machine. 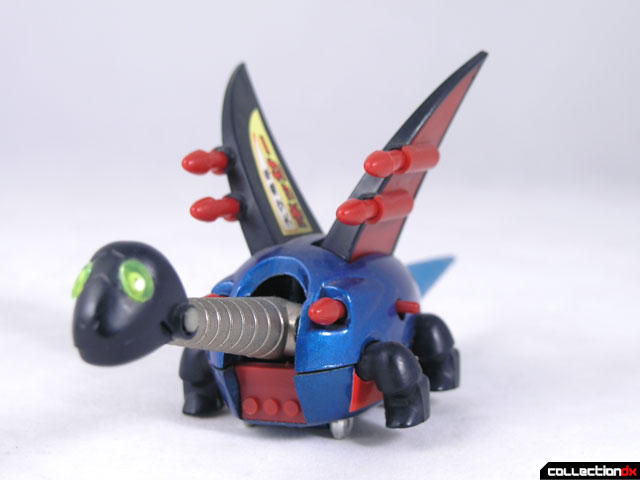 The head is dark blue plastic with translucent green eyes. It's articulated at the jaw. 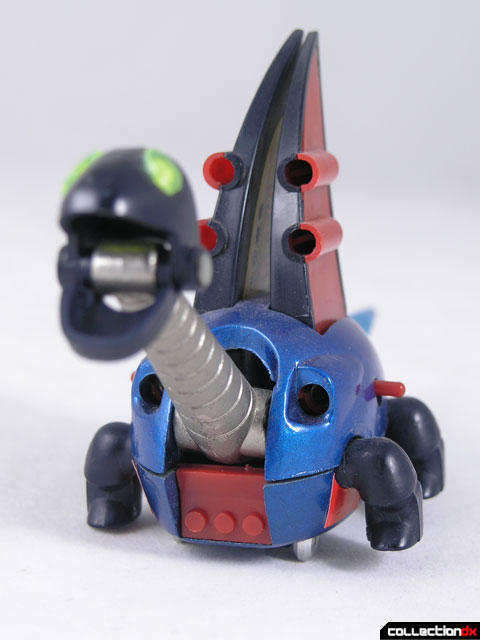 To put it bluntly, Nesser rocks. I love it. The only thing you have to be careful about is the tail. Over time the blue plastic of the tail becomes brittle and breaks off easily, often in the package. Be sure to have the seller check it before purchasing one. 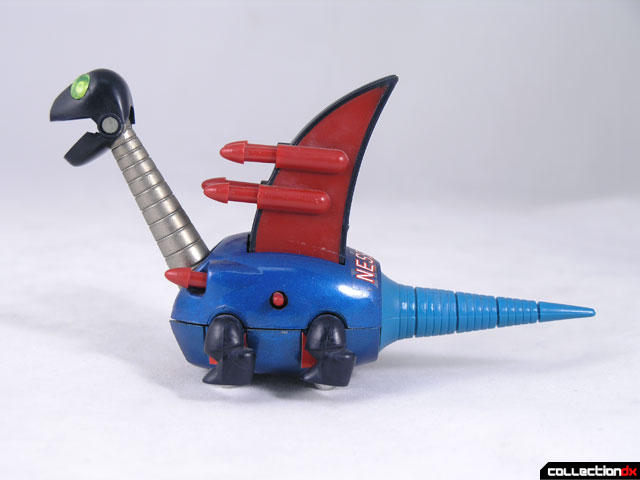 Josh, I love this toy! It just made my morning! Very cool!

Aw! So cute I can't hardly stand it.

That's pretty awesome. Makes me wish we got toys of the versions in New Gaiking (which were admittedly a lot less cute).

How big is the toy actually?

A 75 chogokin. Rare finding, my friend.

That was my first Japanese toy at 5. Man I love that thing.

By the way Josh B, you go to stop taking bites out of your boxes.