King Ding and His Robot Brain

I have been a collector of Japanese spaceship. Monster and robot toys since I got my first true Japanese toy, the great Popy PC-12 DX Space Battleship Yamato in 1980 but my love of robot toys stems from the great American plastic robots of the 1960s and 70s. Toys that CDX readers may not have any familiarity with. Toys like Remco’s Rudy the Robot and Lost in Space Robot, Ideal’s Robot Commando, and my favorite Topper’s King Ding. Wonderful, often gigantic, motorized robots with an American “mid-century futuristic” aesthetic, candy colors and delightful gimmicks.

In the 1960s, The United States was deep into the Space Race. Children (and many adults) were enthralled with everything space. Television was littered with Science Fiction shows like Lost In Space and the original Star Trek. At this time, the United States was also the manufacturing center of the world and somewhere around this time, Topper Toys’ factory in Elizabeth, New Jersey was apparently the largest toy factory on earth.

By the late 1960s they introduced a line of motorized robot toys called “The Ding-a-Lings.” Yeah, I know. Not the toughest sounding name, but this was a sweeter and simpler era. At least that’s how I remember it. I was a little kid in the 70s and grew up with a great many yard sale toys – among them Zeroids, Major Matt Mason – and the Ding-a-Lings.

These little robots were around 5 inches tall and designed around a personality trait or function. There was a very mechanical robot with gripping arms called “Claw”, a Robby the Robot look-alike called “Answer Man” with a roller dial and in his chest and popping balls in his head that enabled him to answer yes-or-no questions, and more whimsical designs like “Fireman” with a Fire Chief’s hat design for a head and a firehose for a hand.

The candy colors and fantastical nature of these Ding-a-Ling robots really cannot be understated. Robocon and Robot 8-chan would appear to be their thematic descendants.

The central gimmick surrounding these robots is that you could insert a “Power Pack” into the backs of each of them which would motorize the robot, driving the rubberized wheels in his feet and the gearing that activated their otherwise manually operated gimmicks. Pair these robot’s up with Ding-a-Ling Skyway Playsets, which were gear-toothed tracks that included loops and curves and the robots would zip around these monorail style tracks – rightside up, upside down and across bridges and loops.

By the 1970s, Topper was experiencing problems and the U.S. toy manufacturing industry was winding down – but the Ding-a-Lings still saw the grandest entry in the line. The King of the Dings. 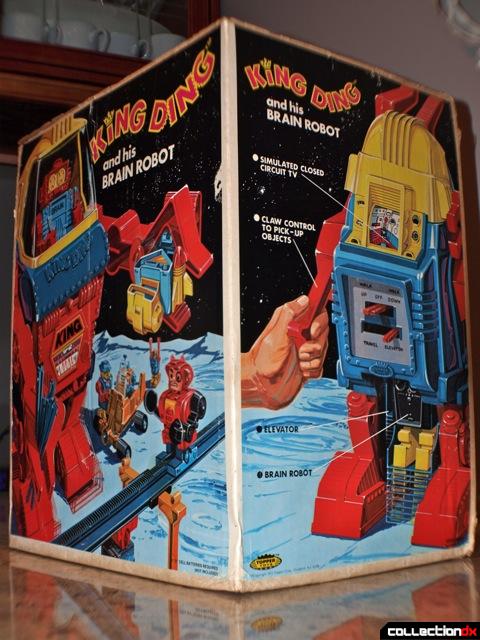 King Ding is among the most spectacular of the giant American robot toys of the era. 14 inches tall, 8 inches across at it’s shoulders and 11 inches deep – largely due to the interior volume necessary for his gimmicks and the fact that he is powered by 4 D-Cell batteries, stacked two on top of two and positioned longitudinally – the opposite of anything you see in toys today. 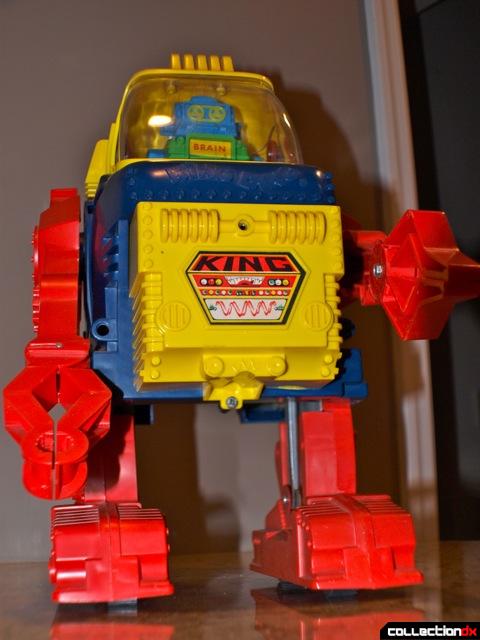 First off, King Ding is a robot piloted by a robot. Take that, Mazinger Z! King Ding comes with his own Ding-a-Ling commander, “Brain”. Brain is a great looking little robot with tremendous detailing, designed with along the lines of a 1950’s concept of computers and automation. He has computer-tape spools for eyes, rivets lining his form, and what look like buttons and registers festooning his body. 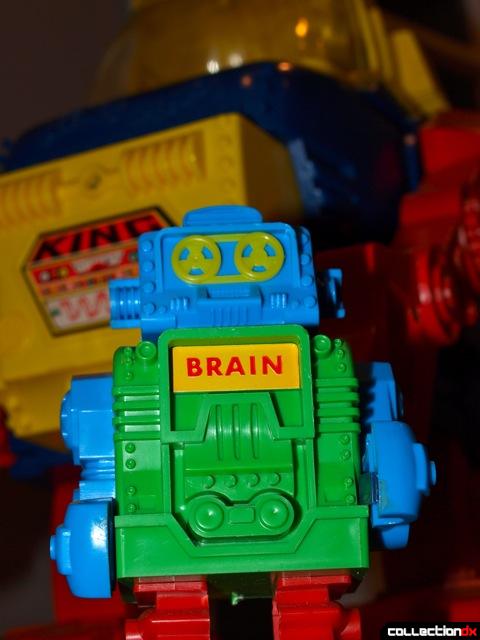 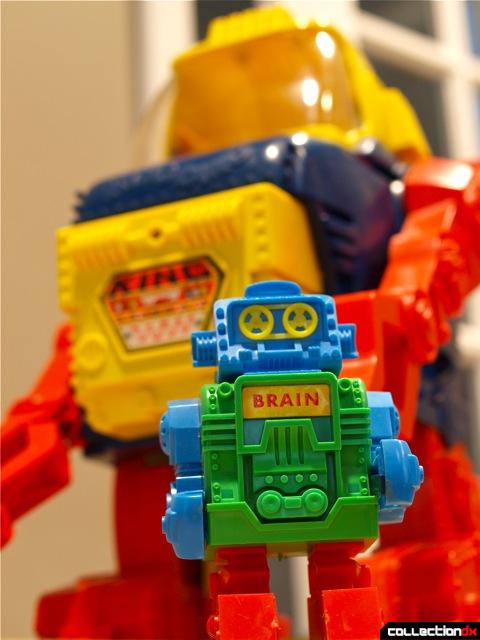 King Ding himself, of course, towers over Brain. 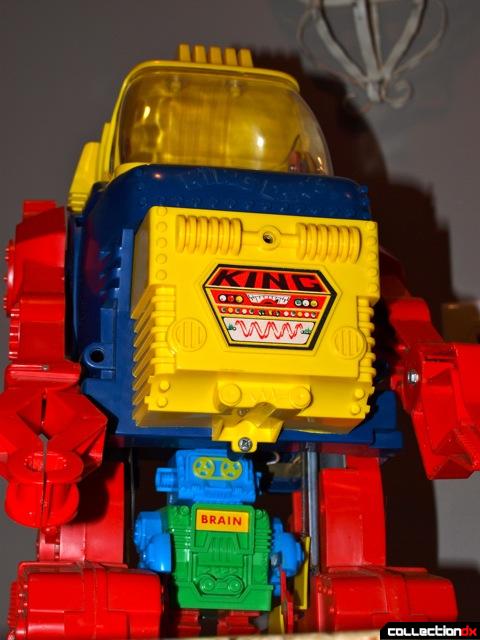 His claw-like gripping arms can easily clasp and raise (manually) Brain over King Ding’s clear cockpit of a head. 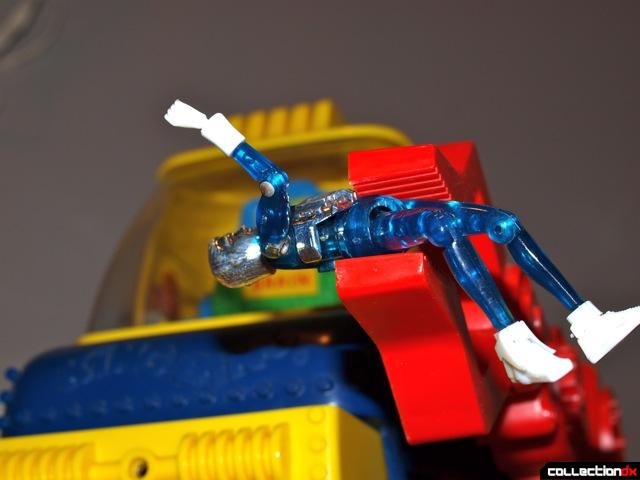 The claws are activated by a trigger at the top/rear of the arms but Brain’s function is to be the pilot and that is accomplished by moving to the rear of the giant robot where his control panel is positioned. 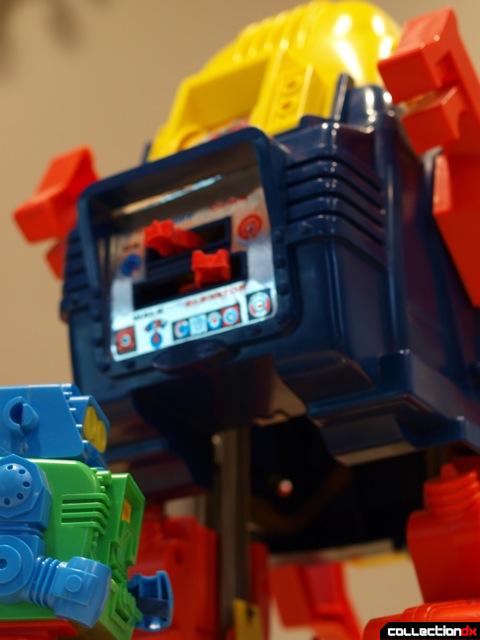 Below a rotating cylinder meant to simulate a closed circuit television”showing scenes of Brain moving through a fanciful representation of the giant robot’s innards, are King Ding’s controls. One lever switches his function from “walk” to “elevator” and another to determine the direction of the elevator’s movement. 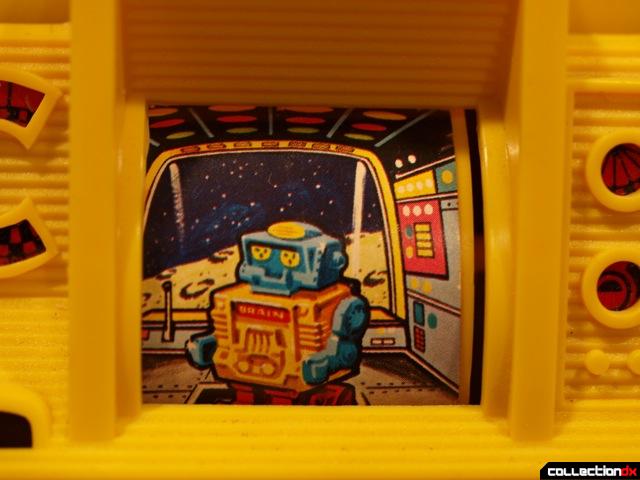 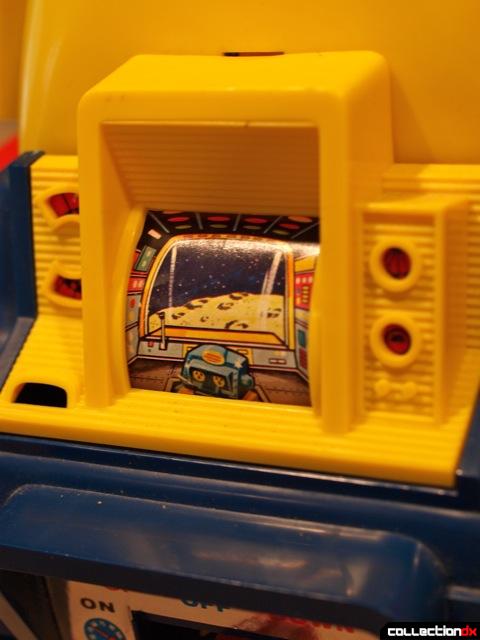 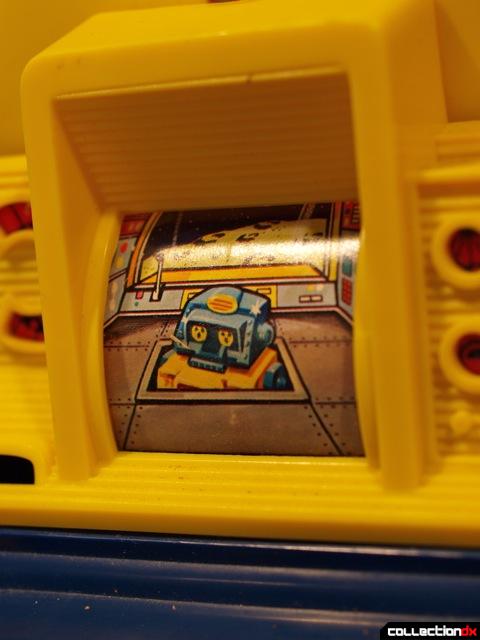 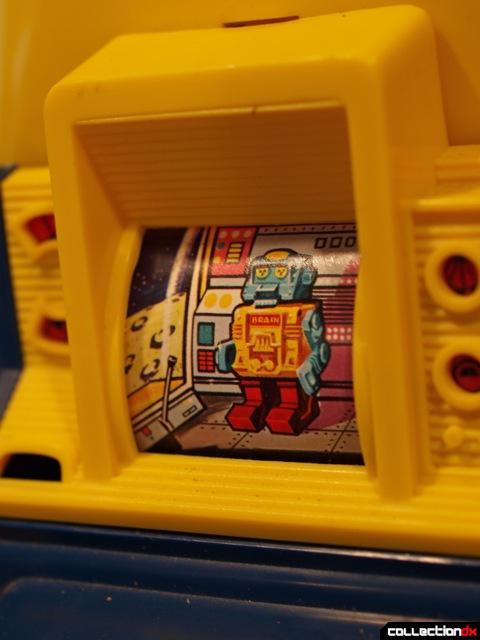 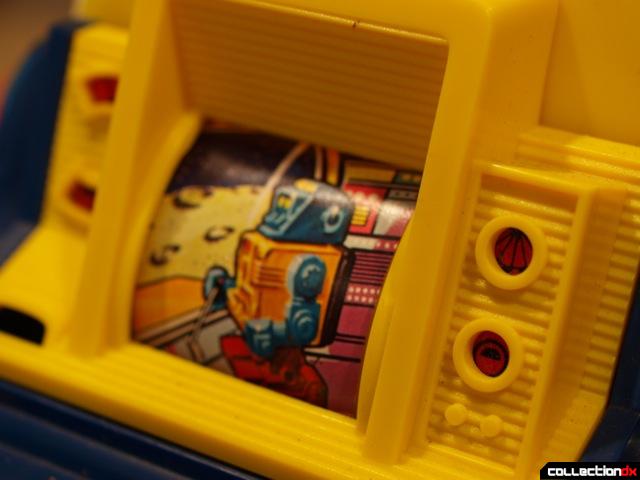 Flip the lever from off” to “elevator” and a yellow elevator platform descends from King Ding’s interior Load Brain onto the platform (or let him drive in on his own if you have a Power Pack) and Brain’s hands automatically snap onto the two red control levers. Flip the switch to “Up” and Brain rises through the robot’s interior and into the clear dome head accompanied by the spinning image wheel’s picture show. 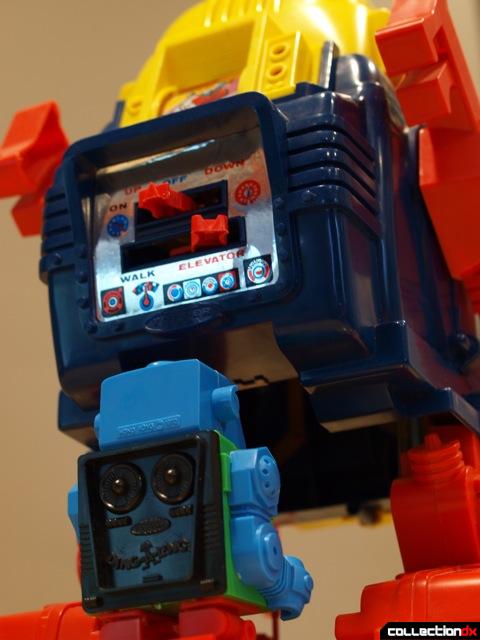 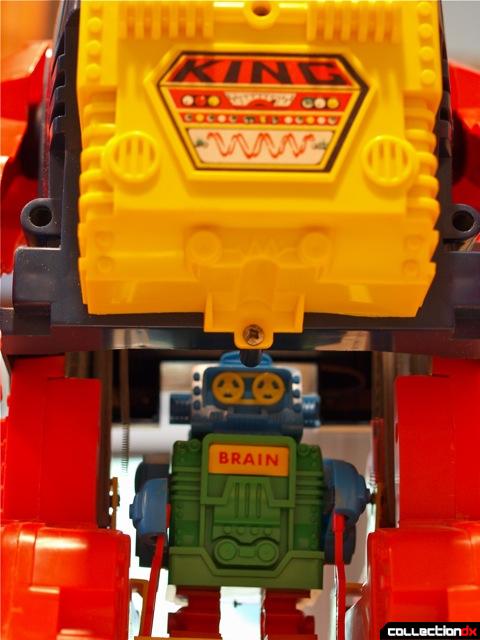 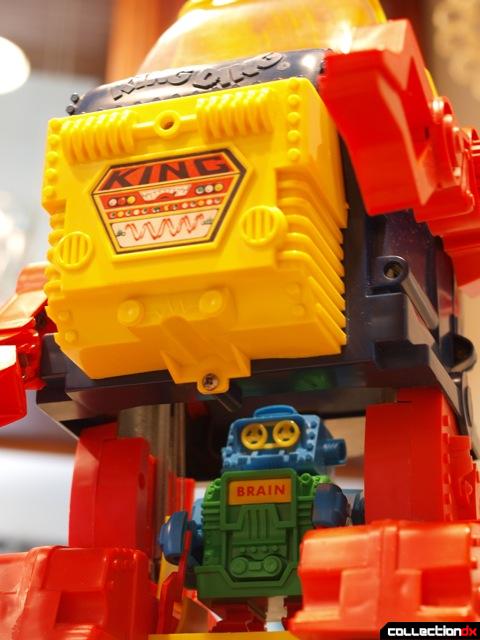 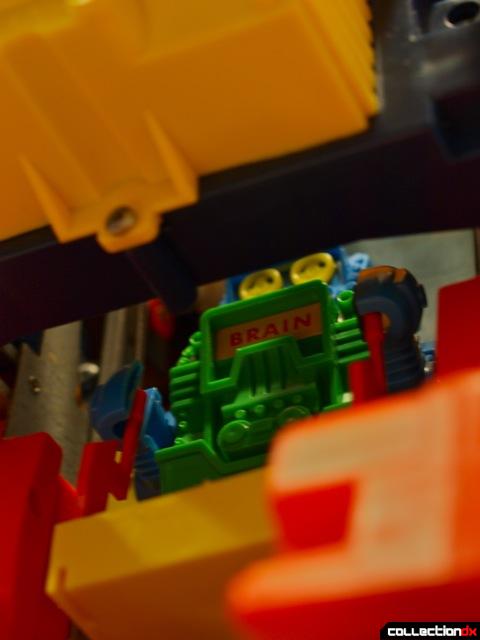 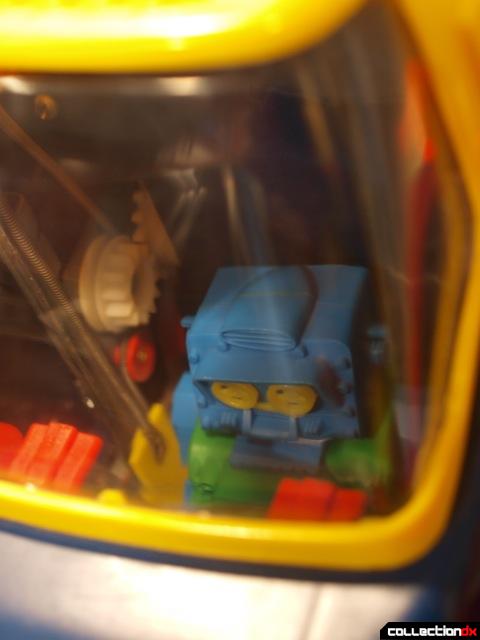 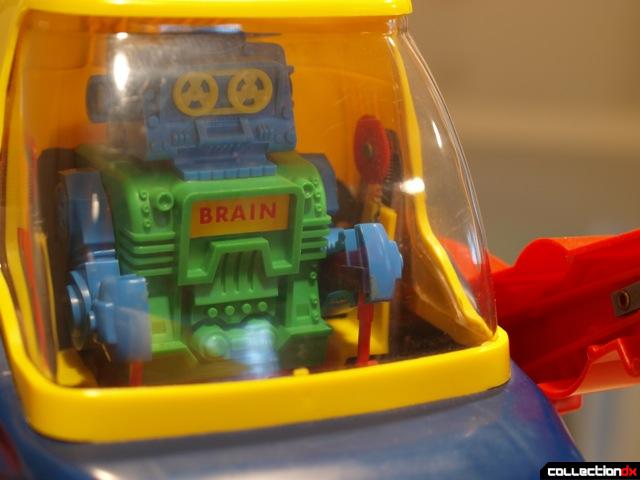 Crank the bottom lever to “Walk” and King Ding begins to move. 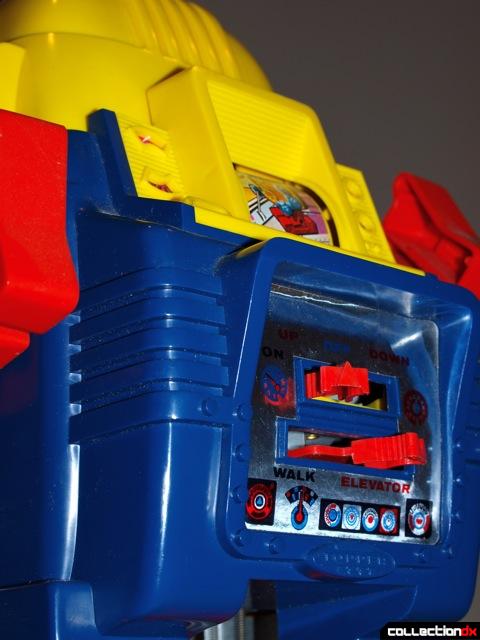 King Ding is not one of those wobbly scissor-walking robots with big tines projecting from the interior of the feet. He has big rubber wheels in his feet and moves along with a shuffling motion. The elevator track inside is a fairly complex system of gears and pulleys with a coiled metal spring where you might expect a simple rope or cord. 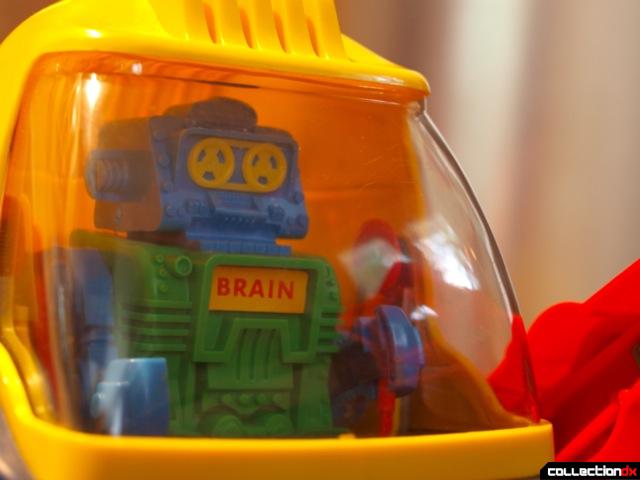 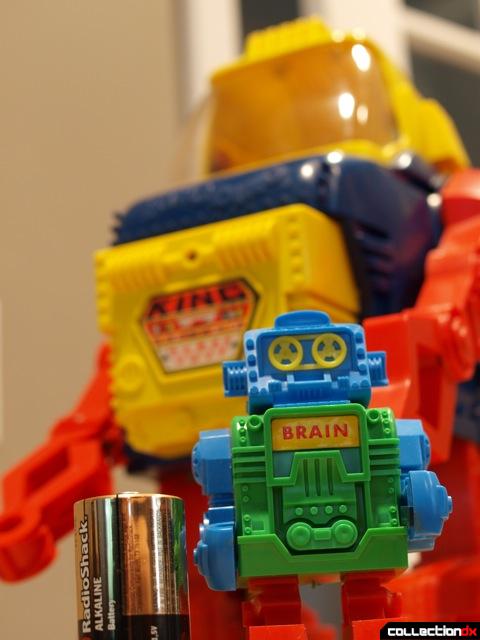 King Ding is encrusted with detail and charm and is a beautiful representation of American robot toys at their zenith. The Ding-a-Ling robots were gone from toy shelves by 1972 but they went out with a bang. These are fairly rare toys, but a few are usually always available on ebay with working versions of King Ding selling for between $200 and $500 depending on the condition. It is a wonderful toy that charms and delights 40 years later. 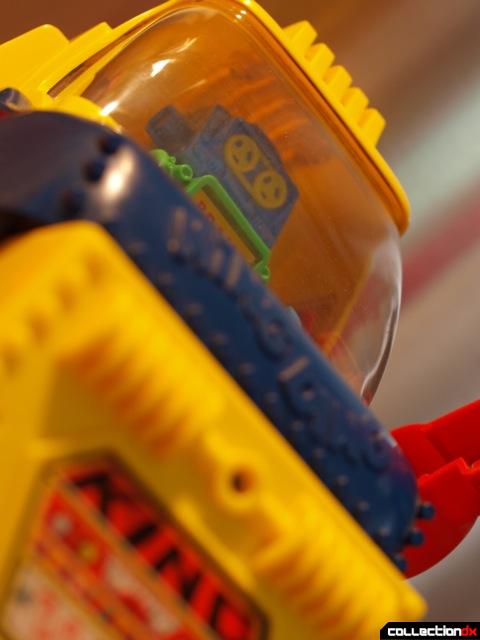 I have included a video for your viewing pleasure, the fun sound effects are a nice substitute for the screeching gear sounds of King Ding’s as of yet un-oiled mechanicals.

7 comments posted
more of these please`

Great review and a great piece. A robot piloting a robot is genius. Thanks for shining a light on a part of the vast sci-fi pantheon (American! Plastic!) which we rarely discuss here. I for one would love to see more along this line.

I have been very close to dipping my toe in the Matt Mason universe, but it would probably destroy me.

What a great toy! We need to bring that elevator gimmick into the modern age... STAT! :P

This was one of my favorite toys when I was a kid! Well. next to my Zeroids and Major Matt Mason, that is! I had a huge Skyway set and at least five different robots. They were great fun!

Is the COOLEST. THING. EVER.

Bandai, we need an S.O.C. King Ding. You're going to run out of Japanese super robots anyway (we'll know they're at that point when we get an Albegas).

Also, this company did the Johnny Seven One Man Army? Awesome.

Excellent review of one of the all-time greats of my childhood. I grew up in the 70's, too, and the Ding-A-Lings were easily my favorite pre-1976 toys. Well, these and the red Remco Lost in Space Robot. When I think of toy robots, they are the first things that come to mind.

All my Dings came from flea markets. It was like a treasure hunt, since you rarely found ones with working power packs. I remember finding a couple of minty packs sans robots for very cheap since the seller had no clue what they were! ^_^

Back when Ebay first started, I hunted around to replace my childhood Dings. I grabbed several plus a couple of the big track sets. I really need to set it all up and snap some pics.

HOLY CRAP THIS TOY IS ADORABLE!!

It's SO cute! It has such CHARM! The design, the colors, it's so friendly!

Why don't we have motorized toys like this today?!?!

Look at this line! Look at all the gimmicks they crammed into it! I'm sure with some modern redesigns it'd be a hit now: