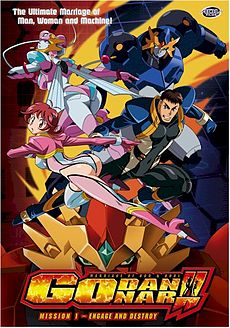 Godannar, the ultimate marriage of man, woman and machine (also known as 神魂合体ゴーダンナー Shinkon Gattai Goodannaa), is an anime series directed by Yasushi Nagaoka. The success of the first season has led to a sequel (known as Godannar second season).

Now, on their wedding ceremony, the Mimetic beasts emerge after years of tranquility. Goh and his robot, Dannar, are called to action once again forcing Goh to leave Anna at the alter. As Goh struggles in his battle against the Mimetic beast, Anna stumbles upon a top secret robot known as the "Neo-Okusaer". She is able to pilot Neo-Okusaer to save her fiancee by merging it with Danner to form the mighty robot "Godannar."

The series (both seasons) is famous for its fanservice: upskirt shots and the scantily claded female pilots. (Wikipedia)