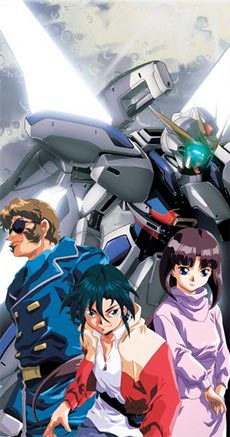 After War Gundam X (or "Gundam X") is an anime television series from Japan. It is a part of the Gundam franchise that started in 1979, but takes place in an alternate universe called After War Era. The series has 39 episodes, aired in Japan from April 5, 1996 to December 28, 1996. It was directed by Sunrise veteran Shinji Takamatsu (SD Gundam, Golden Brave Goldran, School Rumble), and the screenplay was written by Hiroyuki Kawasaki.

Following the phenomenal success of Gundam Wing (and the end of its run), After War Gundam X (released in Japan as 機動新世紀ガンダムX, or Mobile New Century Gundam X) premiered in early 1996. This series was the third of Bandai's alternate universes, and the last Gundam series to air for several years. This series is, in a way, a "what if" on the Universal Century's One-Year War. What if the colonists had dropped dozens of colonies instead of one, and destroyed Earth's surface? What if most of the world's population died, leaving the survivors in a ruined Mad Max-like world? (Wikipedia)