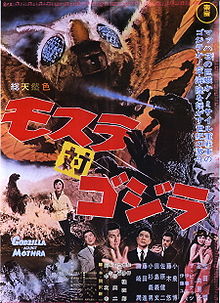 Mothra vs. Godzilla (モスラ対ゴジラ, Mosura tai Gojira) (also known as Godzilla Against Mothra, Godzilla vs. Mothra, and Godzilla vs. the Thing) is a 1964 live-action special effects monster film directed by Ishirō Honda. It was the fourth film to be released in the Godzilla series, produced by Toho Company Ltd. It is the second film to feature Mothra.