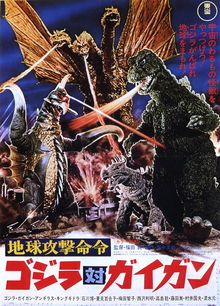 Godzilla vs. Gigan, released in Japan as Earth Destruction Directive: Godzilla vs. Gigan (地球攻撃命令 ゴジラ対ガイガン, Chikyū Kogeki Meirei Gojira tai Gaigan) and also known as Godzilla on Monster Island when first released to U.S. theaters, is a 1972 tokusatsu film. The 12th of Toho Studio's Godzilla series, it was directed by Jun Fukuda with special effects by Teruyoshi Nakano