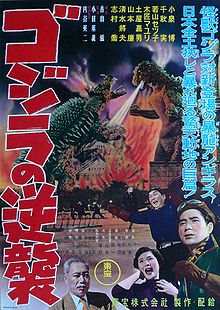 Godzilla Raids Again (ゴジラの逆襲, Gojira no Gyakushū), also known in the United States as Gigantis, the Fire Monster, is a 1955 Japanese black and white tokusatsu kaiju film directed by Motoyoshi Oda, written by Shigeaki Hidaka and Takeo Murata, and produced by Toho. It was the sequel to the previous year's successful Godzilla and was the second film in the Godzilla franchise.