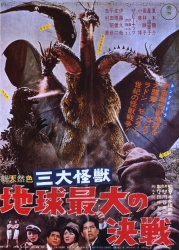 Ghidorah, the Three-Headed Monster, released in Japan as Three Giant Monsters: The Greatest Battle on Earth (三大怪獣 地球最大の決戦, San Daikaijū: Chikyū Saidai no Kessen) and originally released in the US as Ghidrah, the Three-Headed Monster, is a 1964 tokusatsu kaiju film, and is the 5th film in Toho's Godzilla series. It is the first film to feature King Ghidorah, the main antagonist of the Godzilla series, second film to feature Rodan, and the third film to feature Mothra. It was directed by Ishirō Honda with special effects by Eiji Tsuburaya.