King of the King

King of the King is one of the toys that when it first showed up, it was a somewhat dumbfounding experience. At the time, no one had ever heard of a Jumbo Machinder produced in Korea. This was a whole new territory to explore and it was unknown how many different characters were made and in what numbers. At the time, toy scholarship in Korea was all but non-existent. Over time, a great deal of information would come to light, but we're still learning about it all today. One thing that seems to be certain though, is that Jumbos produced in Korea are extremely hard to come by. While King of the King is undoubtedly the most common, it's still not exactly everywhere you look. After the initial discovery, it would be several years until more specimens showed up. 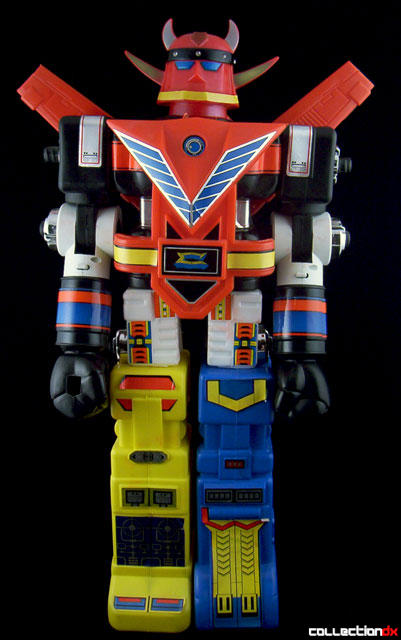 The majority of the toy is based on the sculpt for the Popy Robot Factory Godsigma Jumbo. The biggest difference is that the toy now features a new head, that of Korea's most famous and beloved robot, Taekwon V. (No other official Taekwon V Jumbo is known to exist, only a modern Jumbo vinyl.) Now as we know, Robot Factory style toys are made to be assembled by the buyer from many separate parts and this allows for a smaller box. In what is one of the stranger decisions I've seen by a toy company, this toy has this feature, but is instead packaged, fully assembled, in a large box inside a styrofoam tray! 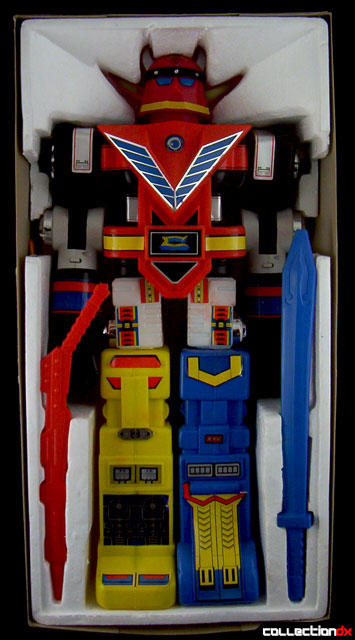 A thin cardboard insert with a cellophane window is on the inside and this is actually a pretty cool feature that you don't see on other Jumbos. It allows you to see the upper portion of the toy, with some nice artwork beneath. 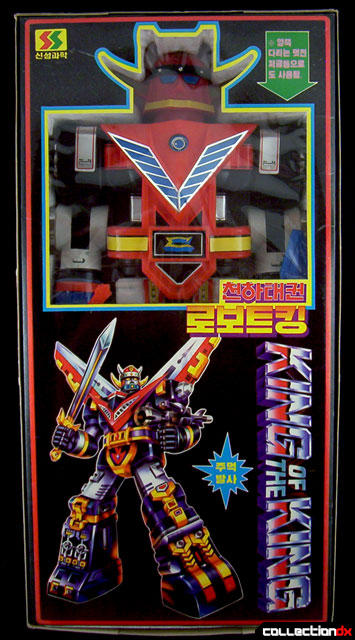 The whole thing is then enclosed beneath another lid that covers the length of the box. The artwork on here is really superb, in my opinion. There is even a slit in the side of the box that allows a handle to poke through for easy carrying. I think this is a real nice touch and the overall presentation is surprisingly sharp for a bootleg toy. 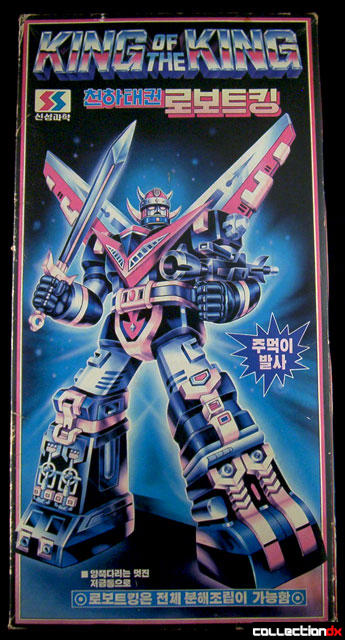 As for the toy itself? Well, it's pretty nice too actually. While I don't have an original Popy Godsigma Jumbo to compare it to, judging by the other Popy Robot Factory Jumbos I have and some of the Italian bootleg robot factory style ones (such as Titan), I'd rank the quality of this Korean issue somewhere in between. It's not quite up to Popy standards, but far, far superior to the Italian toys.

The quality of the plastic feels much better and less likely to crack and the pieces hold together well. I did notice a slight lean on mine as one foot seems to rest a little higher than the other, but a few hockey cards (an old hobby I'm glad I'm long done with!) beneath it fixes that up real quick. No big deal really. Even some of my Popy Jumbos lean a little. I do feel that the arms are a little too close to the body. If you aren't careful when you move them, they might actually knock the chest piece off. 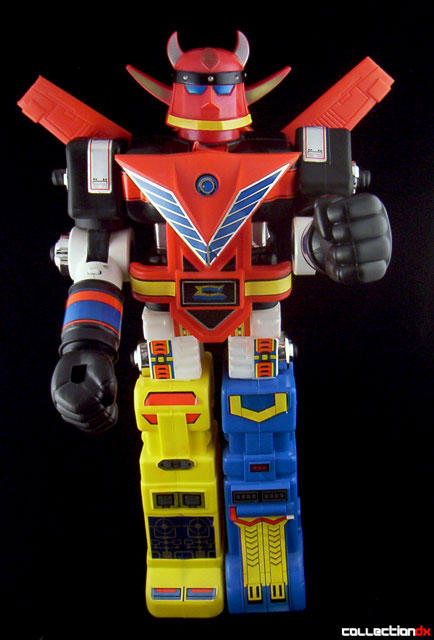 King of the King comes with a couple of weapons that he can hold in his right hand, a gun and a sword. The gun is rather long and as result I think he looks better with the sword, though personally I also tend to prefer a sword to a gun anyway. 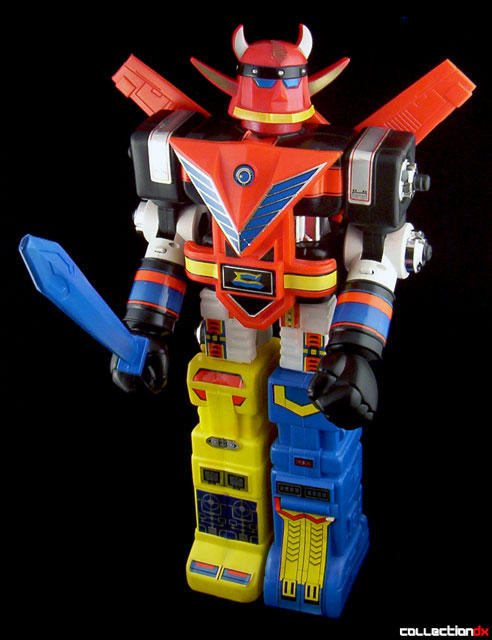 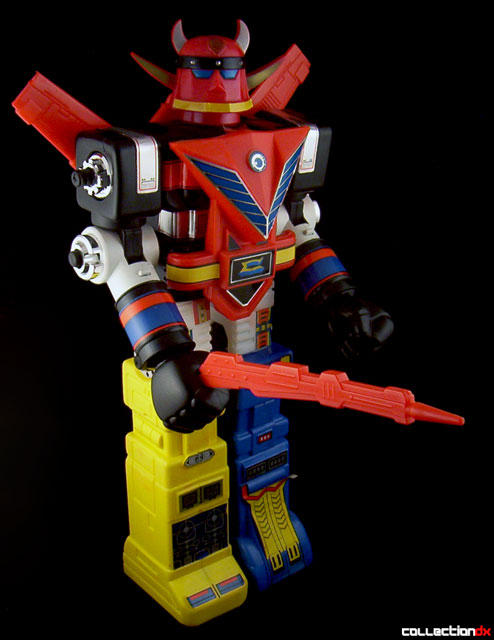 King of the King was actually produced by two different companies. The first version was produced by the Dae Jin Company while the second version reviewed here was made by Shin-sung Kwa-hak. There are some minor differences between the two toys. A nice collector from Korea once sent me the following very helpful picture to demonstrate them. 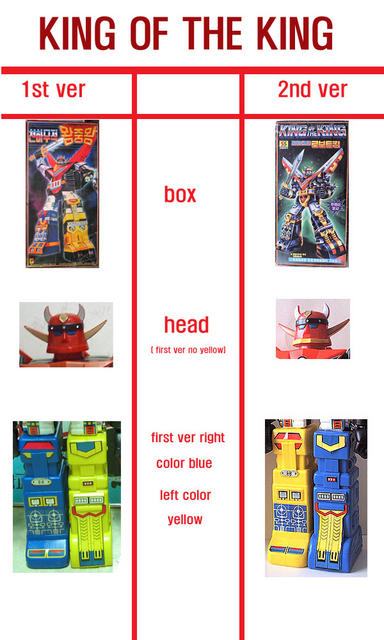 King of the King is a nice toy to have for the Jumbo collector. It's of fairly high quality for a bootleg and is just interesting in that it comes from something of a non-traditional Jumbo market. 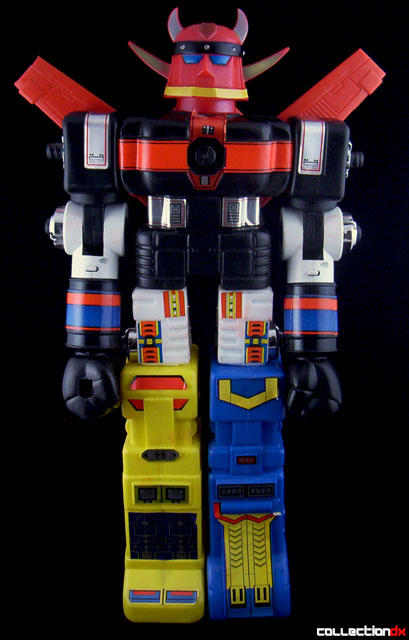 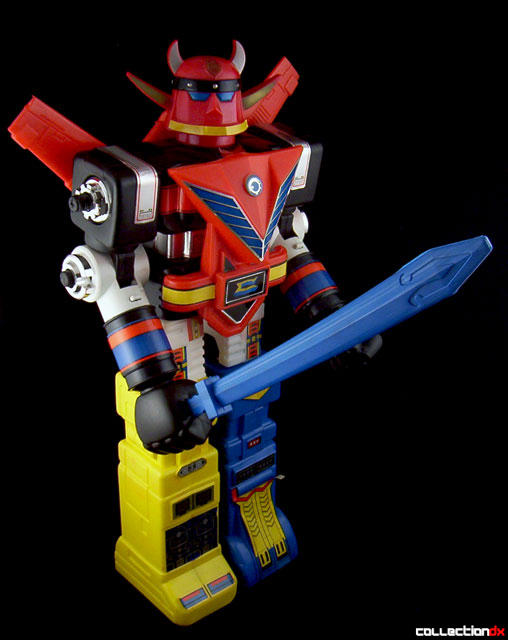 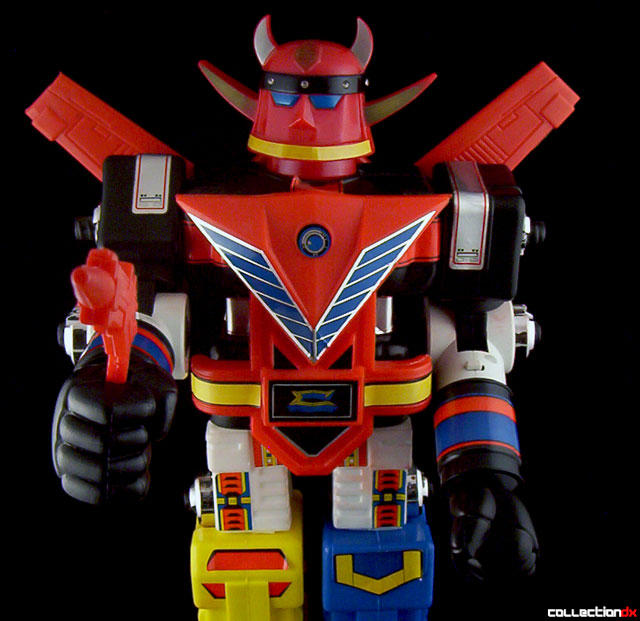 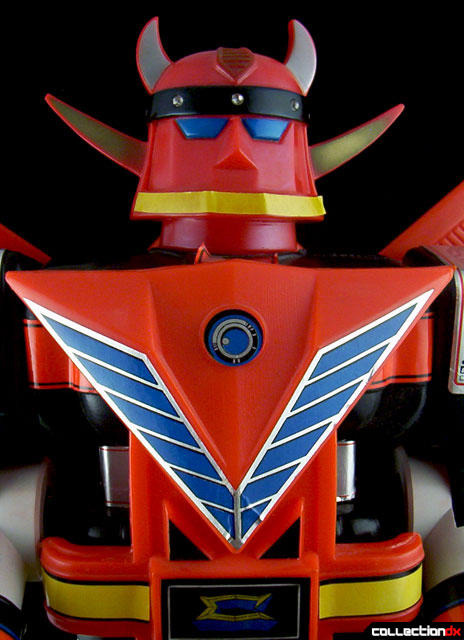 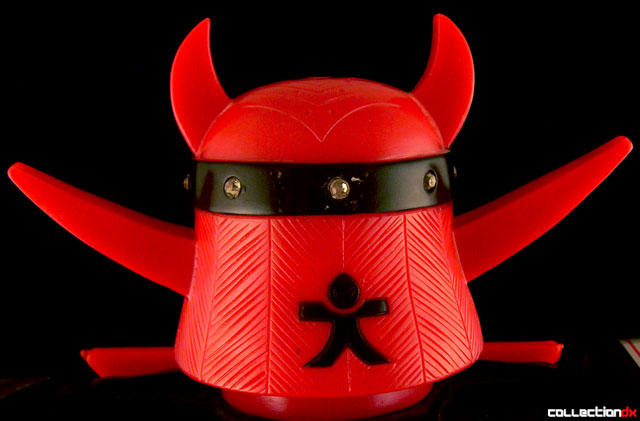 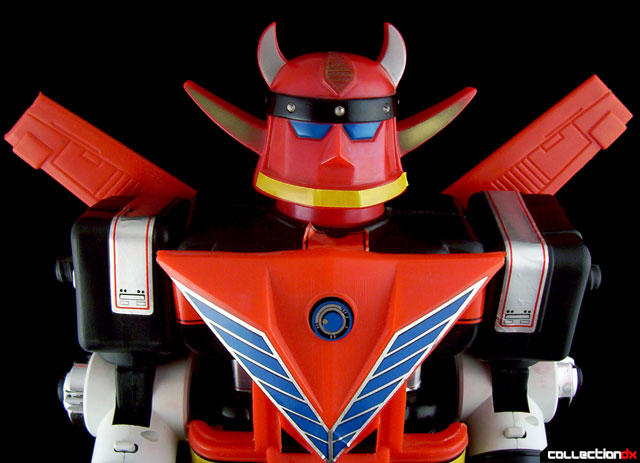 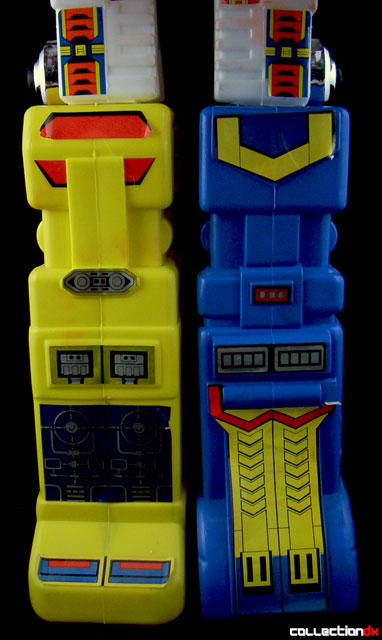 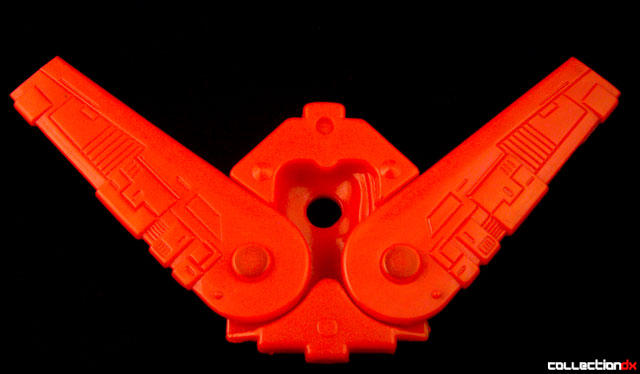 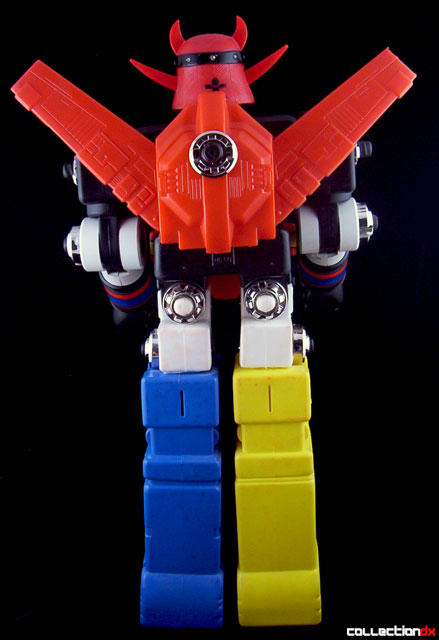 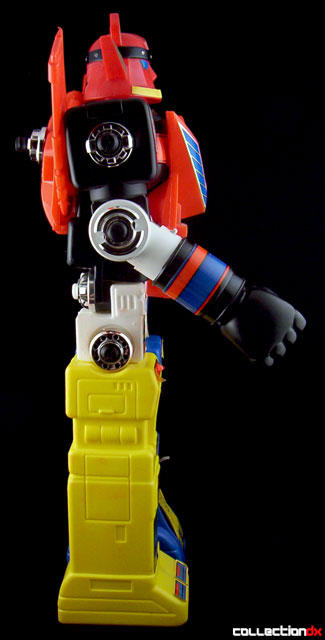 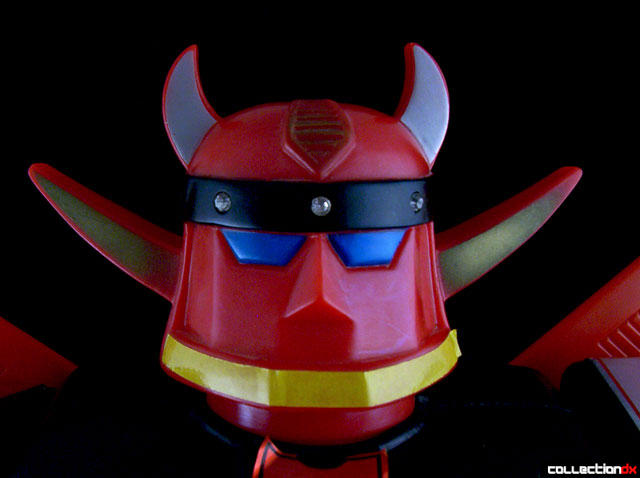 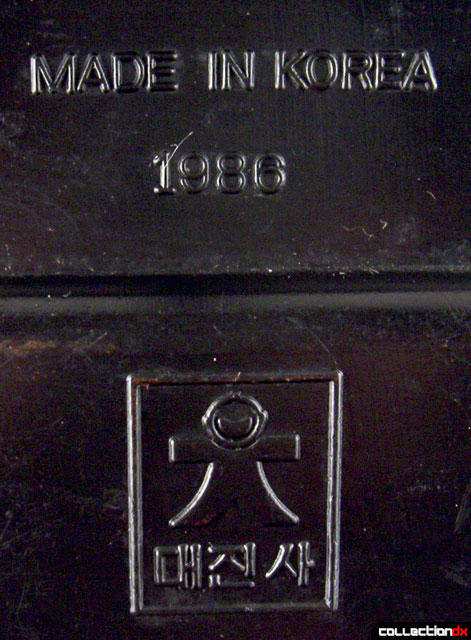 2 comments posted
So awesome. I wish I could

So awesome. I wish I could find things like this.

I have been looking for this king of the king, Jumbo Machinder Taekwon V since last year, but couldn't.
Is there anyone who can help me how to get it? Otherwise, I would like to know who has this item might be in selling.