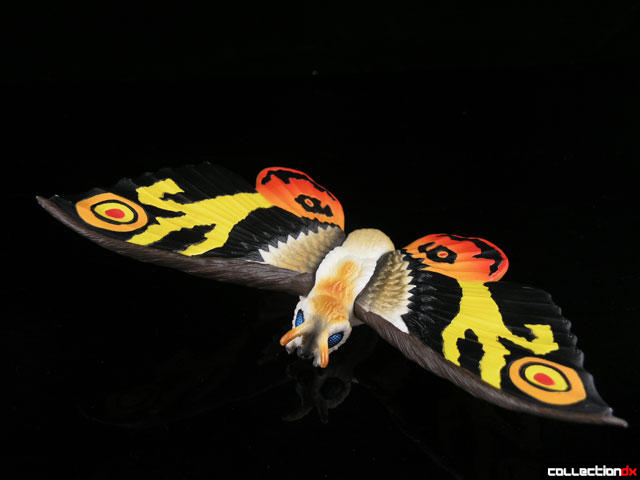 Mothra is one of those legendary monsters of Japanese cinema. Not just limited to being a Godzilla Kaiju, she has also appeared in his own series of movies. In fact, Mothra has appeared in 13 kaiju flicks!

Thank you very much Wikipedia!

Despite having such an impressive filmography, Mothra is often not even remembered by the casual movie fan. Well maybe as that "Flying Bug" or something. I never liked or appreciated Mothra until I got older and re-watched the classic 1961 film. Those damn peanuts stole my heart, I tell you. Now, because of my adult fanboyism coupled with my kids loving the hell out of Mothra from Godzilla: Final Wars, Mothra is the bomb again. 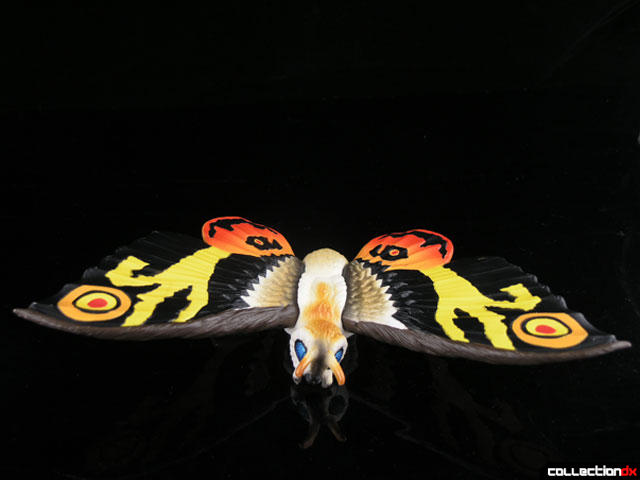 This particular Mothra figure is from the 2005 series of soft vinyl toys called "Movie Monsters". It's as she appears in the 2004 movie Godzilla: Final Wars. 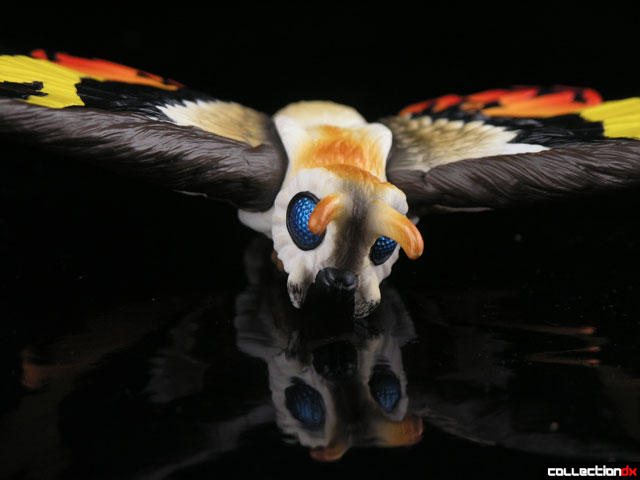 This figure does just about nothing. I mean, you can move her head, but that's about it. Paint detail is sharp but the vinyl is pretty soft, giving the toy the consistency of a dog's chew toy. 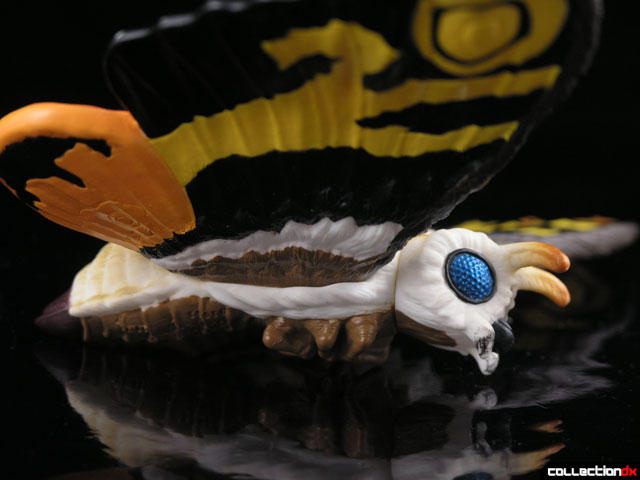 Mothra can be had pretty cheaply, and looks good hanging from your ceiling. If you don't have a Mothra in your collection, you just need one, on principle alone. 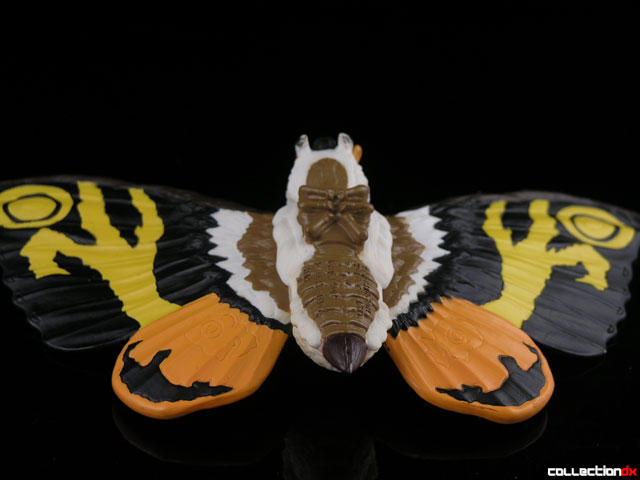 As I type this,I'm drinking my morning coffee from a Mothra mug!
Definately my favorite kaiju after Godzilla himself.

One thing though,and not to be an ass,but I think Monster Planet Of Godzilla is/was one of those weird 3-D VR rides,not a movie,IIRC.

I love Mothra. I'd probably have a lot more Mothra toys if they were easier to display. I'm embarrassed that I don't have a decent Mothra larva vinyl, yet.

We got a Mothra Crowd here. The only movie I really appreciated Mothra in was "Godzilla: Tokyo SOS". I always wish Mothra had better powers instead of wind power & pixie dust. He's a Japanese favorite and has his own back-up singers in the movies those twins. Batra was cool, especially as a larva. I have to say greatest foe's for Godzilla would be Classic Mechagodzilla, Gihdora, Smog Monster (one the best movies), and Gigan.

Haha...not to be an accuracy snob (oh, who'm I kidding!?), but it's a she. Mothra has been referred to as "Queen Mothra" before (along with King Ghidorah and King Caesar/Shisa).

Anyway, this is pretty groovy and pretty surprising: I, too, am a big Mothra fan. I think I like how she was represented in the heisei timeline the best. She (as well as *all* the other monsters, really) was a LOT more powerful in those flicks. She could emit energy beams from her antennae and she could create a glittery cloud of her "scales" around her enemy at close range that would cause their own energy attacks to be reflected back at them! Pretty badass.

As a glowie collector, you'd be shocked at how few good glowies there are of her. Sucks. First, I got this Marusan ST, but look how boring the colorway is. She has minimal light blue spray and silver sprayed eyes. That's it. And for an "ST", she's pretty damn small. And next, I have this giant-sized Marmit. The size is good and the paint is cool...but this came out a year or two ago when Marmit was going nuts with their glitter/double-cast fad. Yes, this is double-cast: translucent yellow vinyl infused with glitter on the outside...and glow vinyl on the inside. The result? Really weak glow. :/

I'm looking to score one of those nifty Fewture/Artstorm vinyl statues of adult Mothra rising from her cocoon next to a smashed-up Tokyo Tower. Yes, it glows! And just like Nekrodave, I've yet to find a decent Mothra larva (that glows)...

And lastly, yet more evidence why Wikipedia (a.k.a., "truth" by general consensus) can't always be trusted: Mothra was not in 1972's Godzilla vs. Gigan OR in 2002's Godzilla Against Mechagodzilla. Furthermore, Monster Planet Of Godzilla (1994) and Godzilla Island (1997) aren't even movies, as kidnicky started to point out.

Any word on when these drop? They are crazy looking, just like Mothra itself. I want a pair so bad.

Y'know, I'm personally not a sneaker head *at all*...but these DO look kinda hot! Might have to pick me up a pair of Mothra's or King Ghidorah's...

As you said: "And lastly, yet more evidence why Wikipedia (a.k.a., "truth" by general consensus) can't always be trusted: Mothra was not in 1972's Godzilla vs. Gigan OR in 2002's Godzilla Against Mechagodzilla. Furthermore, Monster Planet Of Godzilla (1994) and Godzilla Island (1997) aren't even movies, as kidnicky started to point out."

I thought those sounded strange especially the dates of these movies. I grew up watching these movies over and over. Here in the Boston area we had Creature Double Feature every Saturday afternoon on the local channel. Two old monster flicks back to back. Mostly Kaiju just about seen 'em all. At least I think? I've been renting the classics on Netficks lately the best. Ya' I knew Mothra was a chic but what were her offspring. (kidding)

I didn't even notice "Godzilla Island". Is that that strange muppetish show,or the one where they just sort of animate Bandais?

Also I agree with NekroDave,as an adult (i.e. I'm not playing with it) there's almost no point to buying a Mothra toy,due to the display issue. I guess you could hang it from the ceiling?

I used to have one hanging from the rear-view mirror in my car, but every time I'd pull into a gas station or ride with someone who wasn't into this stuff, they'd always say "I love your butterfly!". So it had to come out.. lol

Now, I have two Bandais sitting atop my vinyl case, just at the edge with all the others behind them.

I've also got that Marusan glowie Sanjeev linked to. I picked it up dirt cheap (2,000yen) in Japan in 2006, but it's still in the bag and hanging on the wall.

Hanging them up bagged is probably the best display option for them.

Not easy to display? Well, I have a number of flying kaiju STs, and I gotta admit, they are a bit awkward because their wingspans can get a little shelf-hoggy. They often have a much wider footprint than a typical biped ST.

But that's when you just get creative with your displays. For ST flying kaiju, you can just get those little clear acrylic risers to make them appear floating above the shelf...you should have plenty of room in front for mini's or other toys. [I haven't gotten around to doing this myself yet, but I plan to eventually...]

As for my giant-sized Marmit, I picked up Unicron.com's Unicron stand a few years back, but I've since stopped using it for that toy. I now use it for Mothra and it's DAMN perfect! There's plenty of room underneath for quadruped STs or midsize vinyls. I wish I had a pic handy...it's really fantastic!