From Wikipedia: Tekkaman Blade ("Space Knight Tekkaman Blade") is an anime series, released in 1992. The series was intended to be a reboot of the original Tekkaman: The Space Knight anime, though these shows ultimately shared little in common besides the "armoured hero" concept and a few common character names. The show was also dubbed and released in North America under the title Teknoman, one of the first shows on UPN Kids.

In the Year 2087, the Earth is under attack from an extraterrestrial enemy known as the Radam. The Radam are led by an even deadlier force known as the Tekkamen. Surrounding the Earth is the huge man-made orbital ring known as the Space Ring. The Space Ring was constructed well before the arrival of Radam and was the first human structure attacked by them. As the aliens attacked, those that were left either fled or were killed, and the Space Ring was largely abandoned, serving only as a battle ground for Blade and the Tekkamen. Fighting against Radam and the Tekkamen are the Space Knights. Led by Commander Heinrich Freeman, the Space Knights are a Special Defense Force, and Earth's last hope for defeating the mighty Radam. The Space Knights consist of Noal Vereuse, the pilot of the Space Knights' ship the Blue Earth; Aki Kisaragi, the Blue Earth Navigator; Milly, Communications Operator; Rebin, computer wiz and mechanic; and Honda, Mechanic and Repairs. The Space Knights have been unsuccessful at repelling the Radam until the arrival of D-Boy (Dangerous Boy - Tekkaman Blade's nickname while amnesiac), a mysterious young man who has the ability to transform into the powerful warrior known as Tekkaman Blade.

Today I will be reviewing Bandai's XS-12 Soul Spec Tekkaman Blade with Pegas. The sample for today's review was provided graciously by our friends over at Toynami/Tamashii.

You can pick this item up at Big Bad Toy Store or just click on the eBay links at the bottom of the page for a direct links to the item reviewed today.

Before I go any further I must state that I know very little if anything about the background of this figure and I am strictly going to discuss it from the point of view as a collector that appreciates the aesthetics of the figure. In a nutshell, please refrain from bashing me if something is incorrectly named etc...

Tekkaman Blade and Pegas arrive to you in the aesthetically pleasing window box you see below. You can clearly see Tekkaman and the box also features a half-flap that is able to flip up to reveal Pegas (not shown). 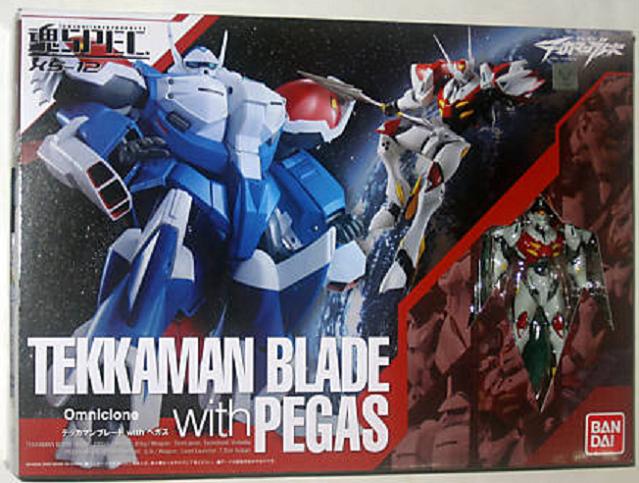 Shown below are all the items included in the box:

I'll start off talking about and the Tekkaman figure first. Tekkaman Blade stands approximately 5" tall with an impressive, 19 points of articulation. He has a lightweight, yet sturdy construction of plastic, PVC, ABS and what I believe to be POM. The articulation of the figure allows for some pretty cool poses as seen below. 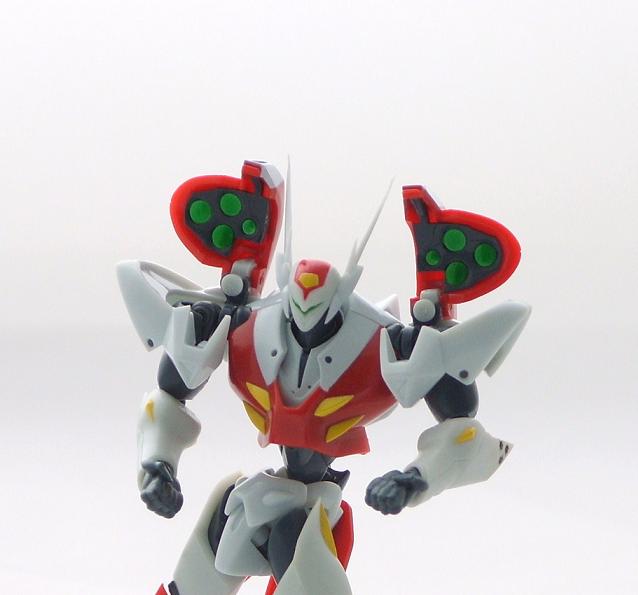 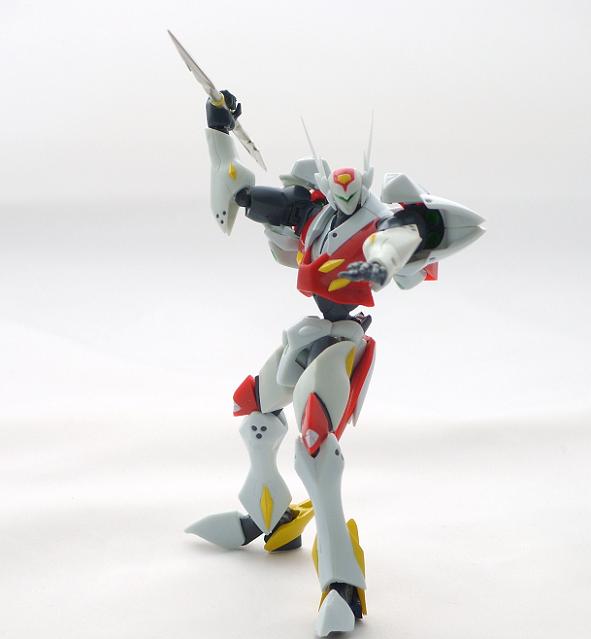 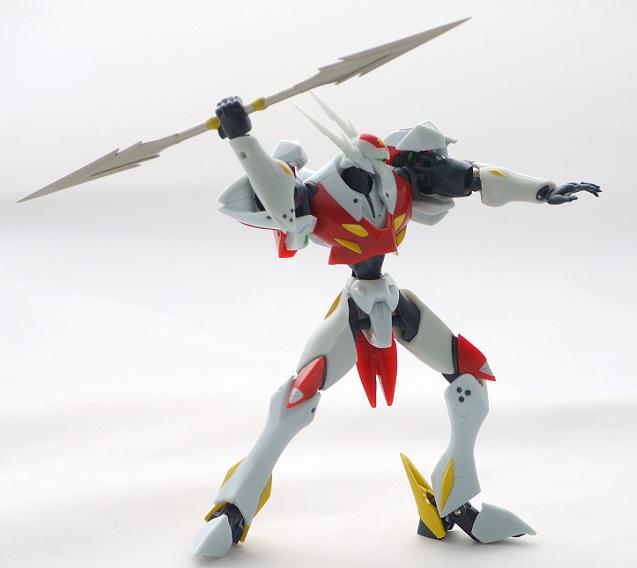 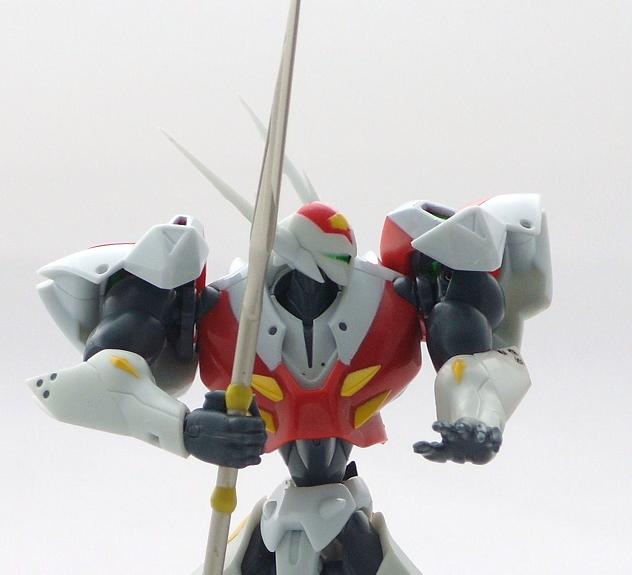 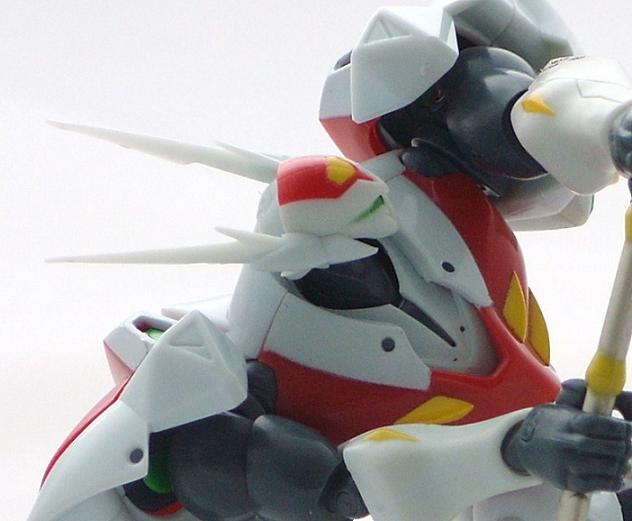 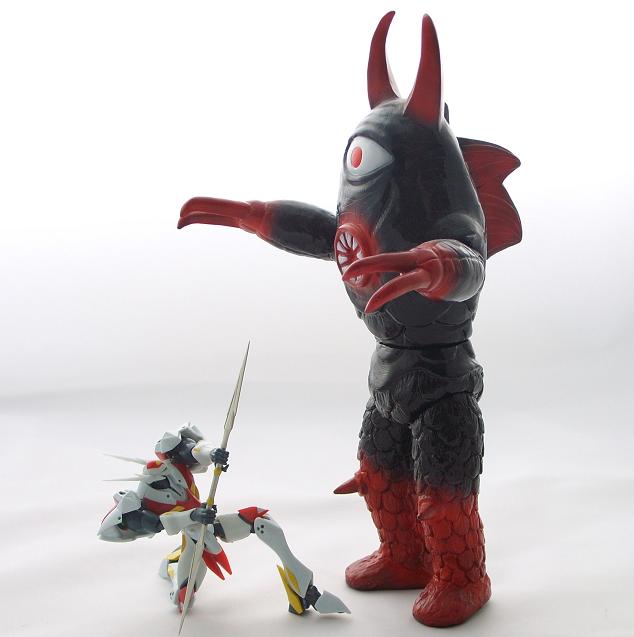 I especially liked posing him with his weapon fighting off CDX'x very own "Sky Deviler" figure. Tekkaman Blade is full of surprises. His shoulders are able to open up to unleash another formidable weapon. You didn't think he was going to fight off baddies with just his staff, did you? What? who did you think would prevail?

Now, Tekkaman is a cool figure, but he really shines when he is placed with the mammoth looking Pegas figure. 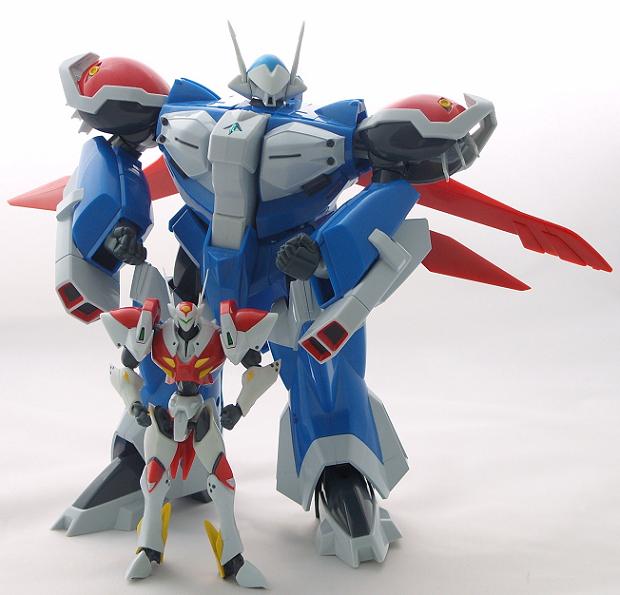 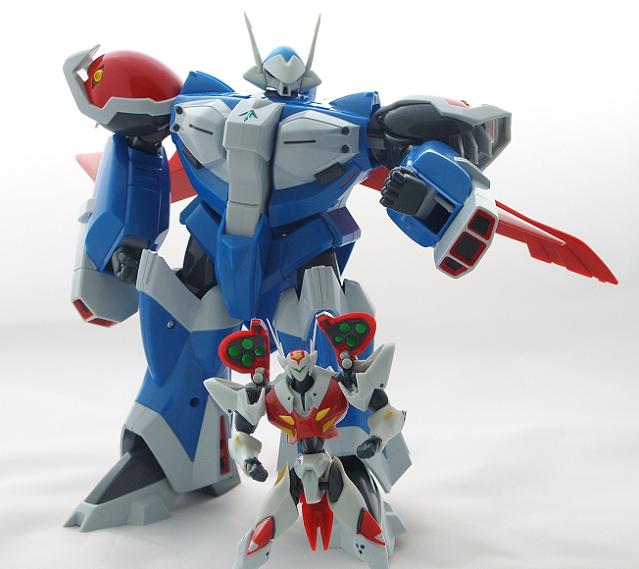 Tekkaman is able to fit inside Pegas via a rear opening hatch. To facilitate this happening you must fold Tekkamans arms forward and replace his head with and extra that is included that has no antennae. 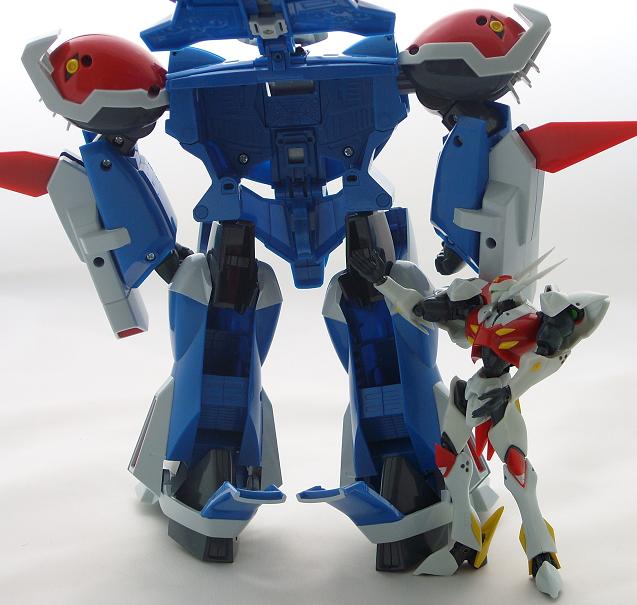 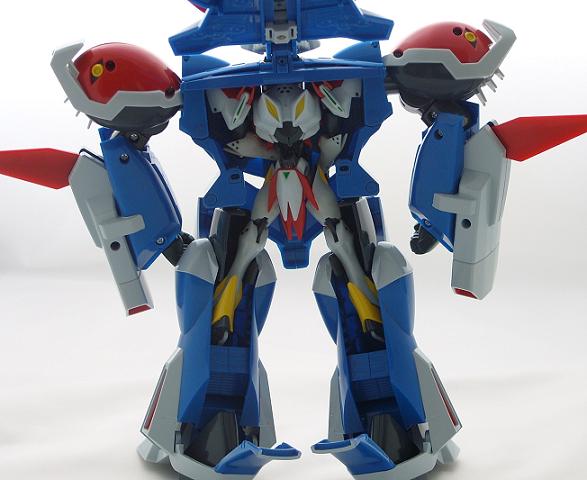 Now that Tekkaman is nestled snugly inside, let's talk about Pegas.

Pegas is an impressive figure standing at approximately 9" tall and almost 8" wide shoulder to shoulder. Pegas is constructed of quality plastic, PVC, ABS, POM and also has a fair amount of die-cast metal content in higher stress areas. The die-cast can be found in the perimeter of the chest as well as the upper thighs and other key joints. The mixture of these materials allows for a really sturdy, solid feeling figure when held. Pegas has 12 points of articulation and features move-able wings on his back as well as each arm, also his head and antennae can move. The real killer for Pegas in the realm of articulation is the fact that his thighs can only be spread side to side with no front or back movement. Even with that being said. I would still say that he has some pretty good articulation for his size, but he is limited by his brawny design. 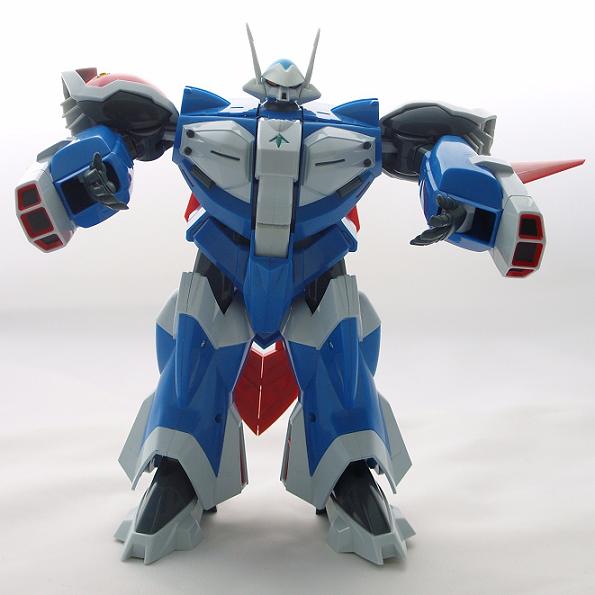 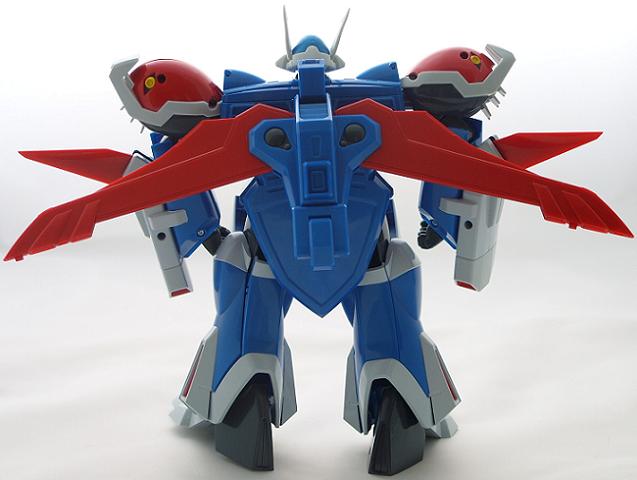 Another interesting little extra that I noticed whilst handling Pegas is the move-able vents located on each shoulder of the figure. Just one of those small details that could have probably been left out but is still cool and appreciated nonetheless.

The last cool feature about this set it the flight mode that Pegas can achieve through a short but fun transformation. Basically the main thing you do is collapse in the legs, straighten the arms, spread the wings, extend the front fuselage and viola! You have a fat, ugly duckling like mode as seen below. The cool part about this mode is that you can allow Tekkaman to ride on Pegas' back like the characters 80's anime Spaceketeers (aka Starzingers in Japan) did with their ships. Another cool little feature that can be utilized in Pegas' flight mode is the control handles that can be held by Tekkaman as shown below. 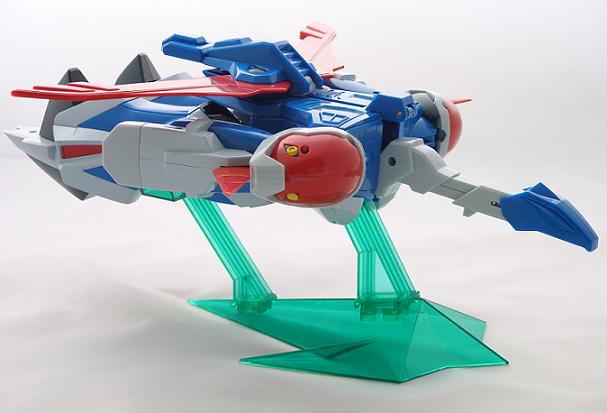 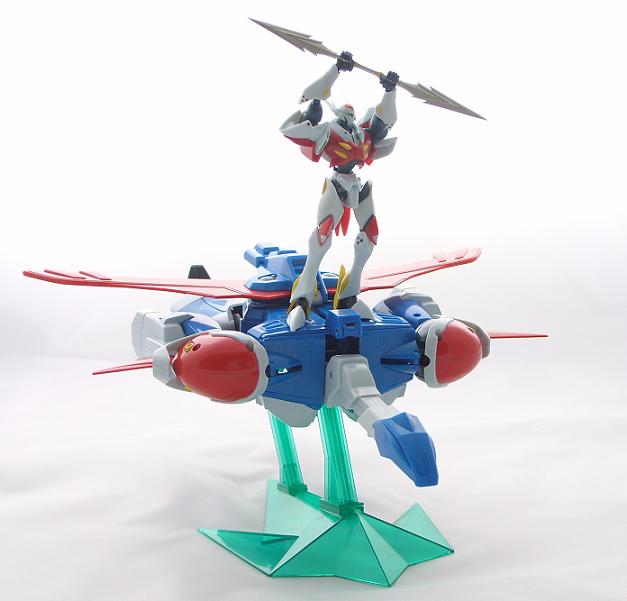 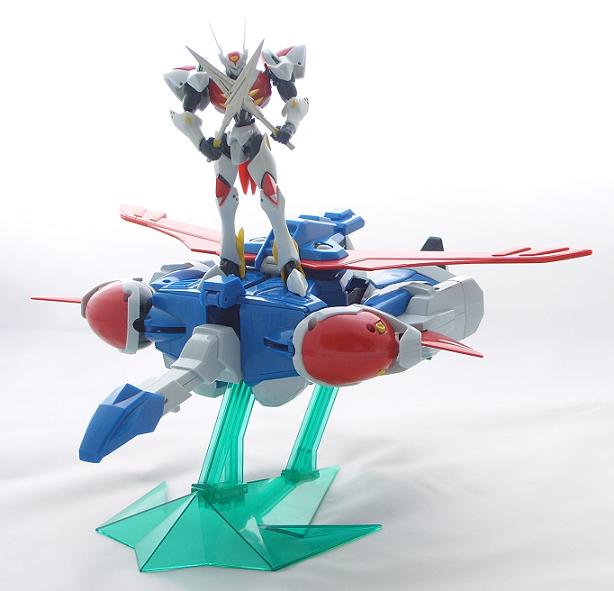 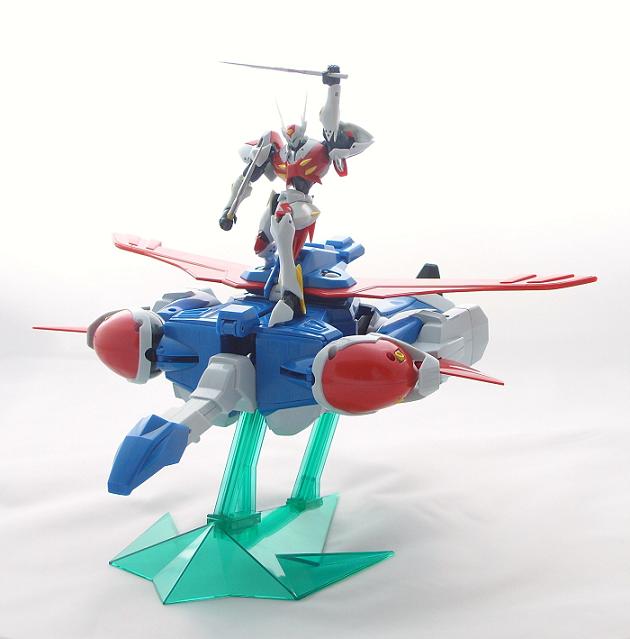 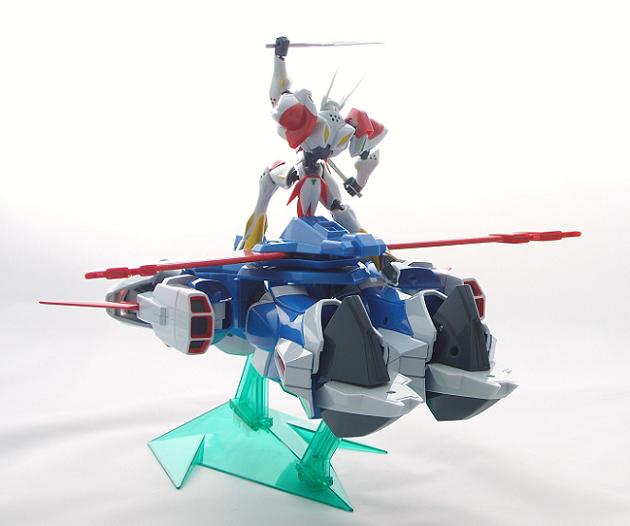 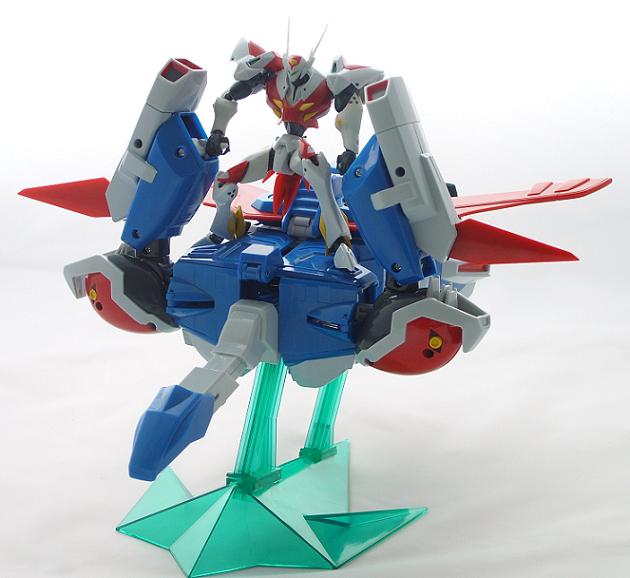 In conclusion, Tekkaman Blade with Pegas is a great set in the Soul Spec line-up. What really separates this set apart from others in the Soul Spec line is the more simplified approach that Bandai took with this set. A good example of this is that there is no removable armor to lose and it doesn't try to do too much or have an exorbitant amount of accessories. In my opinion, this set is one of the most well balanced to date in the Soul Spec line....Fun, yet uncomplicated....who could ask for anything more? 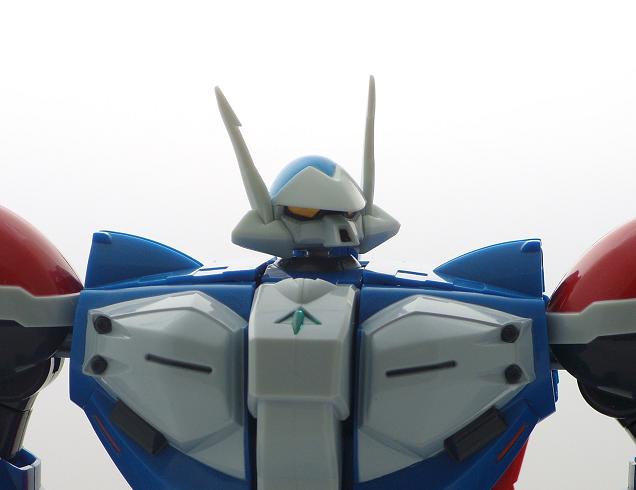 9 comments posted
Actually, I think it's a

Actually, I think it's a shame Pegas can't eject Blade from inside like he did in the show, but that's because he transforms. Also, I think it would be cool if blade's hands, shoulders and head anteannas collpased to form his high speed manouver mode, or include his whips that he uses to retrieve his weapon after throwing it, but that's just me bragging :)

BTW, the shoulder weapons are called Vol Tekka and the handles in Pegas extend when the robot is used to dramatically increase Vol Tekka's power output.

at that price, is it the most expensive SOC SPEC?

I too think it's too bad that he can't turn into his high speed mode. It's a pretty cool attack, and probably would've allowed for an easy way to fit him into Pegas too. This one is definitely gonna be my first SOC, even if it is a soul spec only cause I loved Tekkaman Blade so much. Someday....someday it shall be mine....

I agree. Tekkaman Blade's American rendition, Teknoman, was one of my favorite shows as a child. I've been waiting for what seems like forever for a decent toy set of these figures, so this will be my first SOC investment as well.

Seems like a neat piece, but tekkaman himself has no metal at all?

I'll take Baikanfu over this one, thanks.

The box is great, Tekkaman Blade is great, Pegas is great - Everything is great except the price.

As for Pegas' lack of leg articulation, there is nothing wrong as Pegas was only a carrier robot/battery charger/friendly robot. Notice Pegas' Tako (octopus) head - a trademark of Tatsunoko Pro. who seem to love sea creatures so much that even their trademark logo is a sea creature - a sea horse.

I sincerely hope Bandai will release a diecast of the classic Space Knight Tekkaman and Pegas.

Cool man. I got this recently and its a neat set. I feel Pegas steals a lot of thunder from Pegas but that ok. The ability for Blade to use him as a surf board is cool :D. I wonder though why is the extra head (with shorter antennae) grey instead of white?

Granted the lack of high speed mode and metal parts on blade its still a nice set I'd buy it. :D