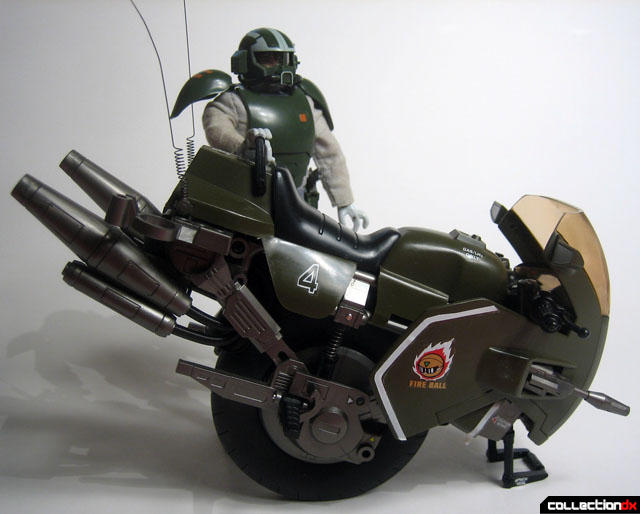 Bandai was somewhat ahead of its time when they released their SF Spiral Zone figures and accessories back in 1985. The Spiral Zone toys themselves were a fine combination of model kit details and toy mobility and were a definite forerunner of Bandai’s High Grade and Master Grade model kit series that are currently being produced today. 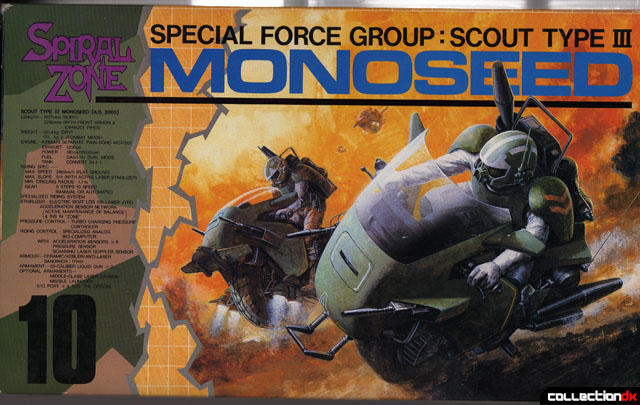 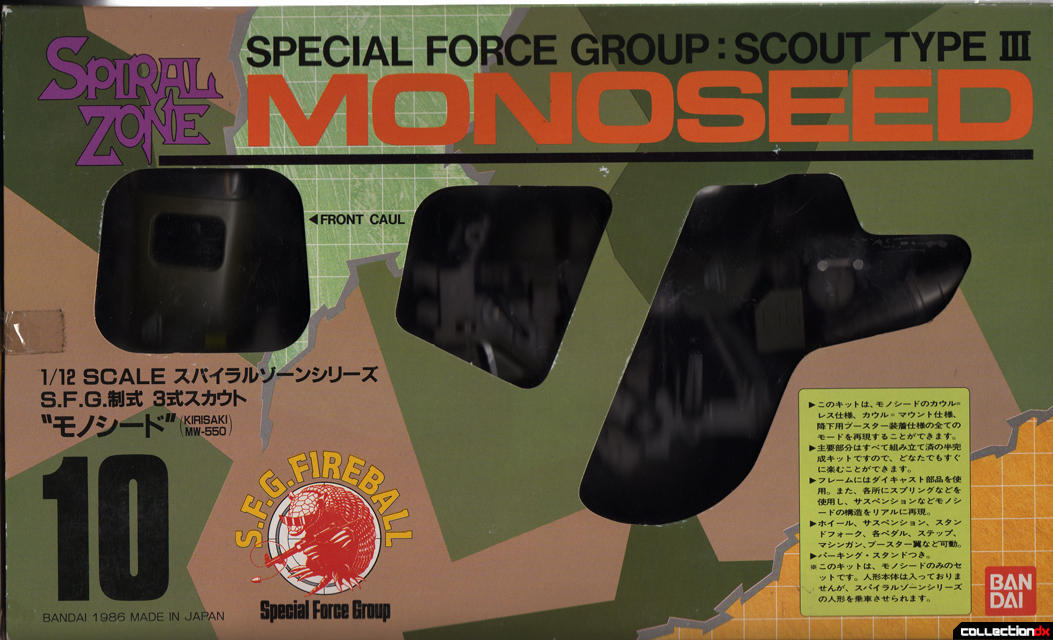 Unfortunately, it was a huge let down for collectors when the SZ line was killed just after two years of production, with only 12 “Acts” released. Although it appears that Bandai was gearing up to release a quick attack assault jeep called Fat Lynx, only one SZ vehicle was ever released, the one-wheeled assault motorcycle called Act 10: Monoseed type III. 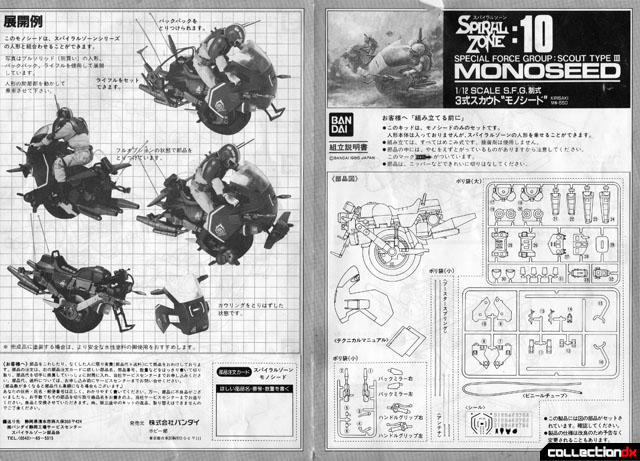 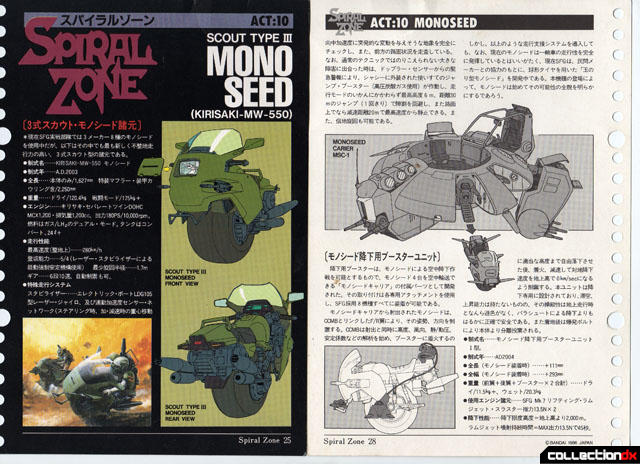 If there is one item in both the Bandai and Tonka Spiral Zone lines that is remembered by even the most passive toy collector, it is the iconic Act 10: Monoseed. The sheer audacity of the one-wheeled designed assault motorcycle along with Bandai’s beautiful multi-media engineering and high craftsmanship resulted in Monoseed being one of the few Spiral Zone acquisitions by non SZ collectors.

I picked up my Monoseed back in the late 1980s at Pony Toy Go Round in LA’s Little Tokyo district for $45.00. Due to the still high demand for Monoseed these days, expect to pay between $100-$250 for an example. 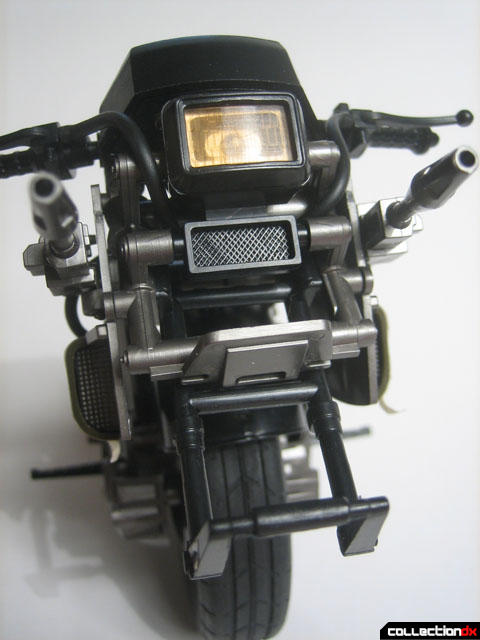 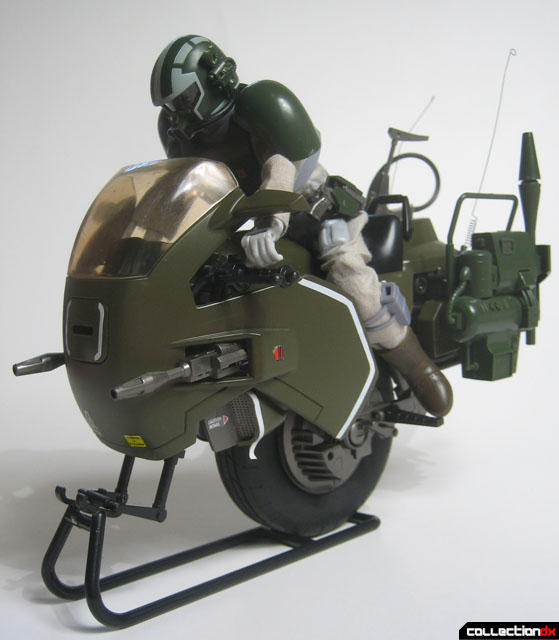 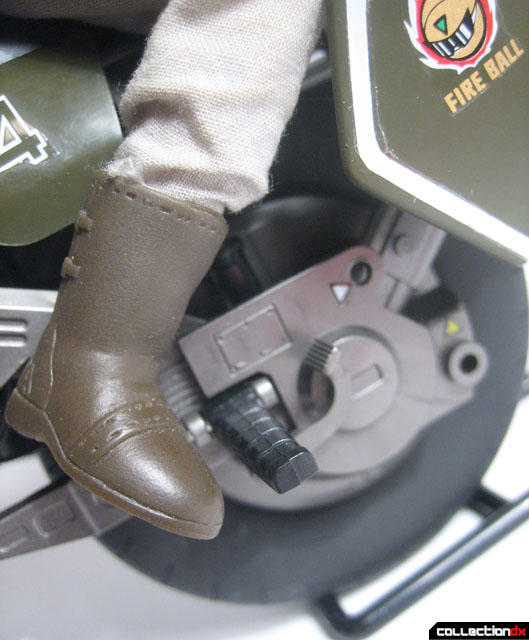 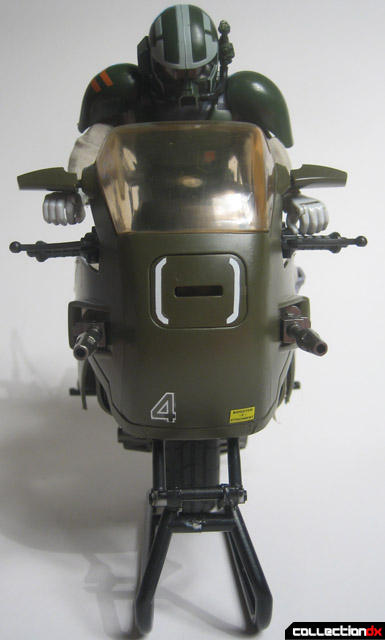 Monoseed’s options include: Optional Jet Pack, maintenance Stand. Some of the Monoseed statistics was that it was produced in 2003 with a 1200cc engine with 10,000 rpms. Fuel is both gas and liquid hydrogen when using its jet pack. Maximum speed is 280km on open road and has a specialized analog bio-computer onboard. Armament include 2x 50 cal liquid cooled guns with 17mm Ceramic/Kevlar/ anti-laser armor. 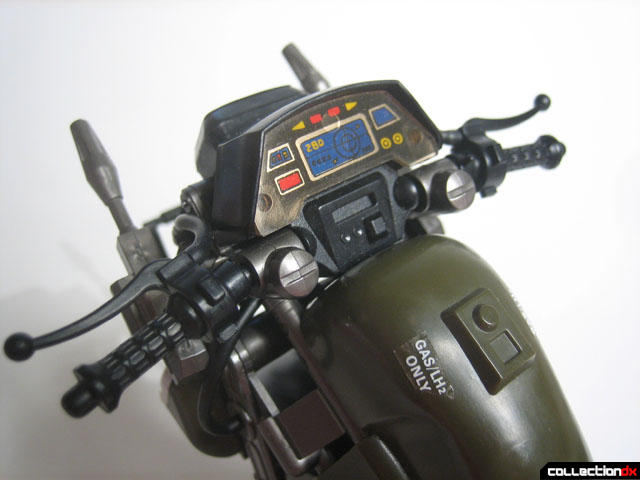 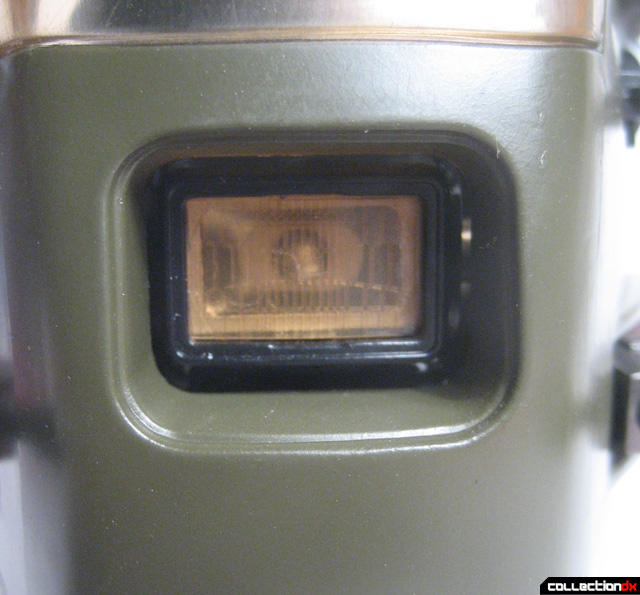 As previously stated, Monoseed is a fine line between toy and model kit which results in some assembly being required. I suggest a good sprue cutter tool to cut the parts off the sprue and give yourself about three hours build time. It is not a difficult item to build up but a couple of the hydraulic hoses need tweezers to attach to their pegs that are buried in the frame. 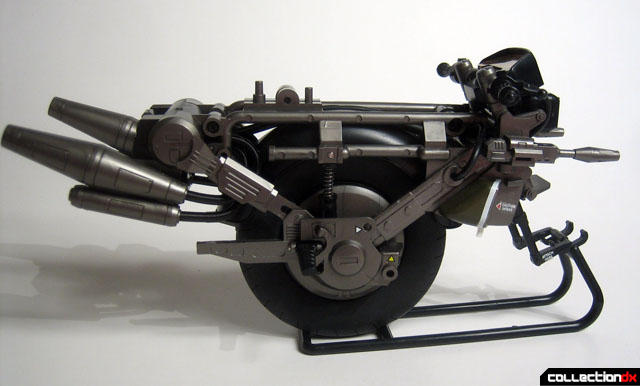 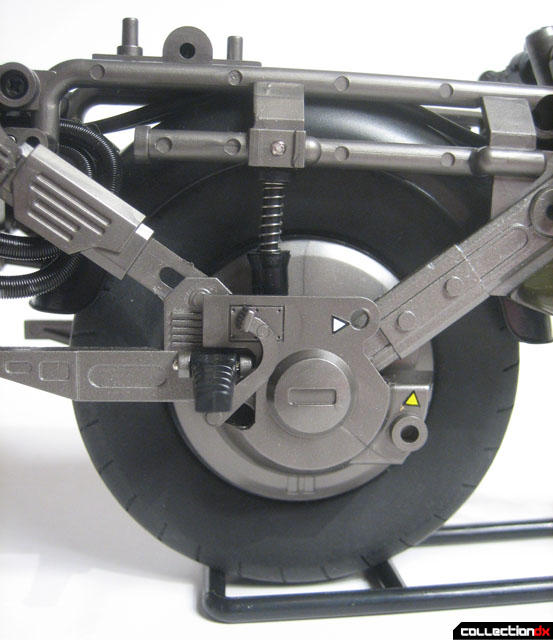 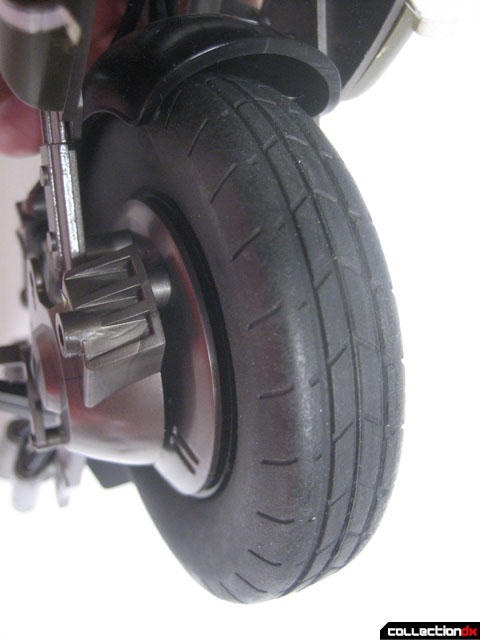 The stickers sheets comes with various call numbers and stenciling for the bike but as the box art suggests you can repaint and airbrush Monoseed to represent the three colors styles from the other extra protect suits. The sticker sheet comes with side art for those various versions. Although the green is a different shade, Monoseed is colored for Act 1: Bull Solid.

Once assembled Monoseed is a sight to behold. The tire is good high-quality rubber that after 20 years still holds up very well. The shock system is made up of cast metal parts and a real spring shock system. The entire cowling and various paneling are completely removable down to the frame for maintenance. Real rubber hosing attaches to all the throttle and braking systems. I also love the details on the dial screen that is enclosed by a clear plastic cover. 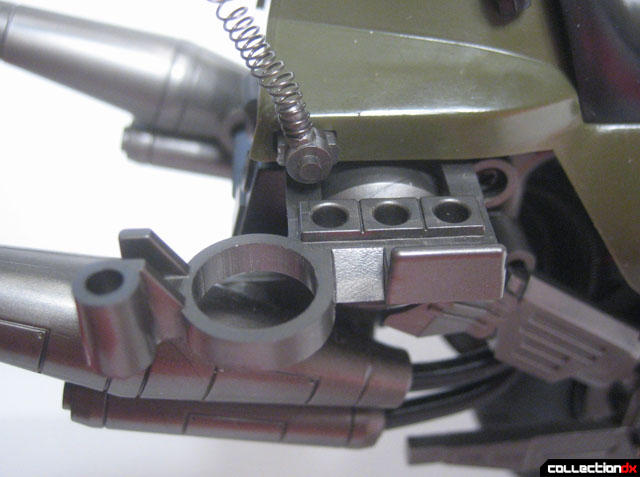 Due to the many various parts, some of the components do have a tendency to fall off the bike, these parts can easily be glued in place, although it has been my policy with all the Spiral Zone toys to not glue any of the parts on so I can put them back into the packaging.

The figure posed on the bike look great although I believe Act 3: Sentinel Bear armor most likely will not fit on the bike due to its bulky armor. 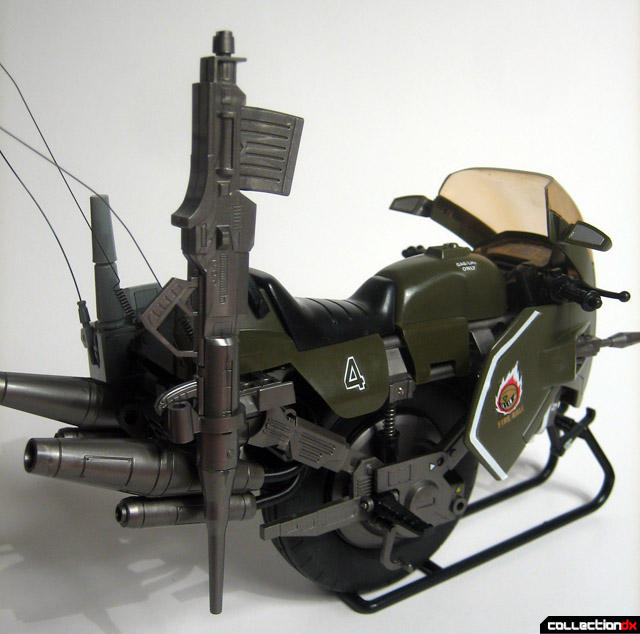 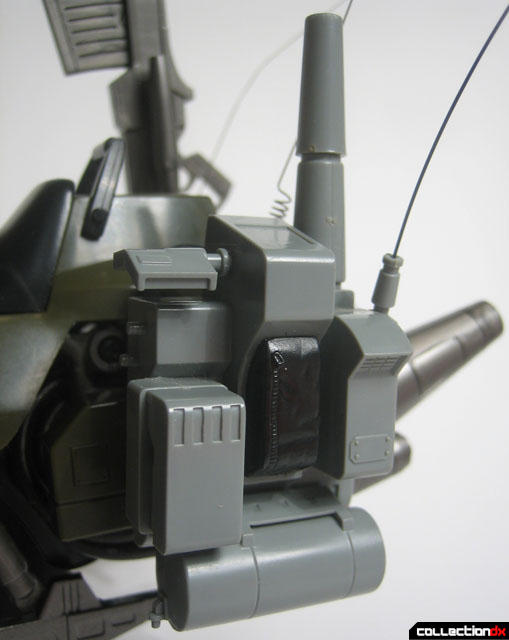 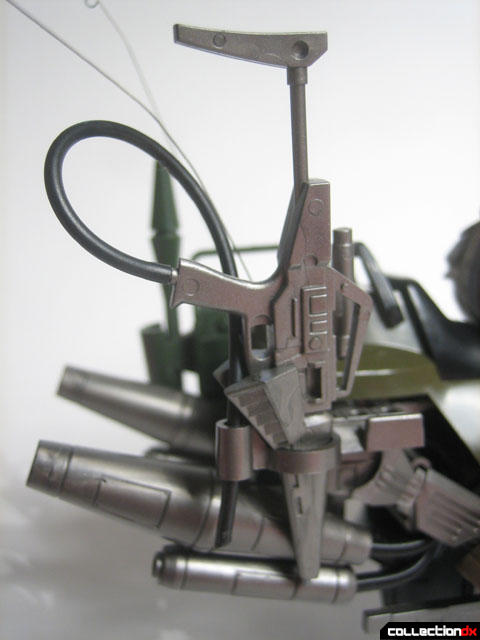 One great feature about Monoseed that has never been documented online is the how you can attach Bull Solid’s and Hyper Boxer’s specific equipment and weapons to Monoseed's backrest for an intergraded look. Bandai’s engineers took some time out to design Monoseed’s backrest to accommodate those parts down to a place to attach Hyper Boxer’s backpack hoses and its 7mm cannon. In fact, there are some clips that are unused and I am curious if they were designed for other protect suits that were never released. Because of Bandai has not suggested how the equipment and weapons attach to the bike in the instructions, feel free to comment if I missed an attachment to the backrest as I would like to have that mystery solved. 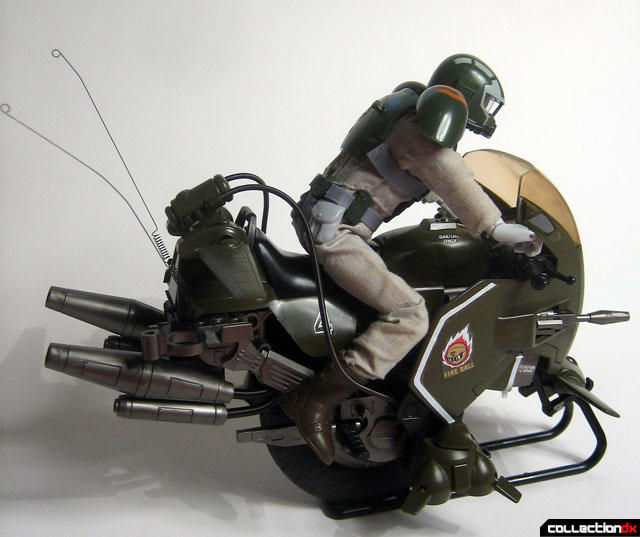 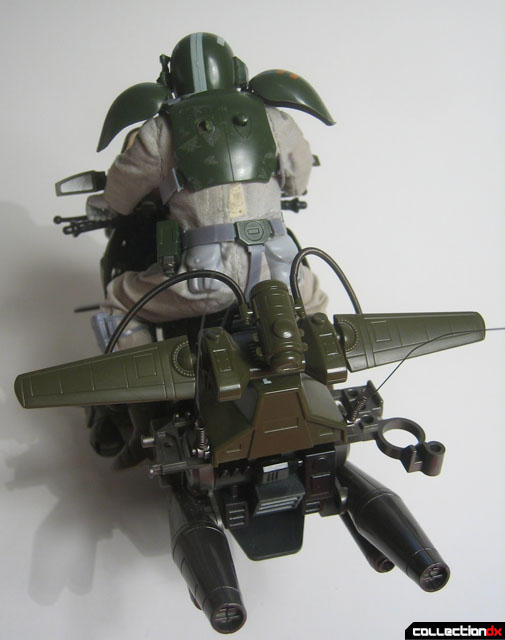 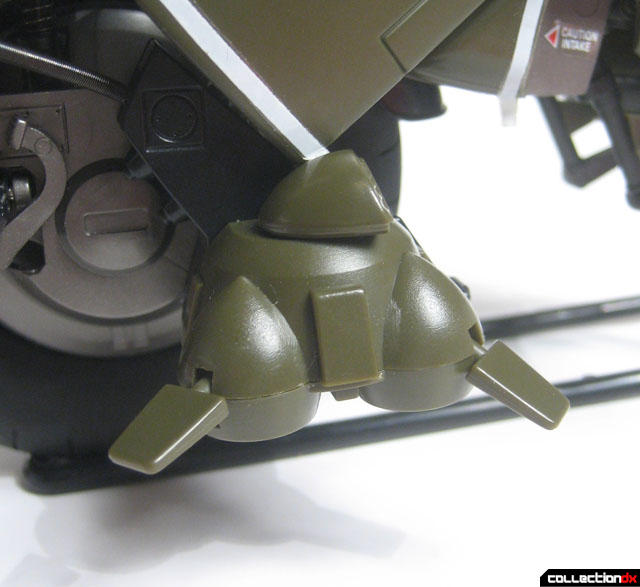 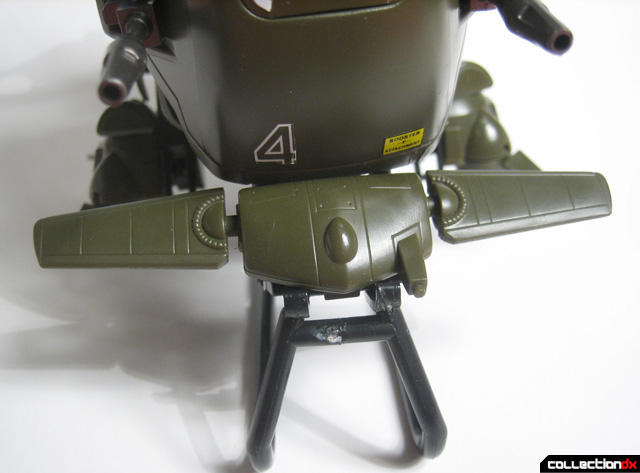 But hold on! Just when you think a one-wheeled assault combat motorcycle is more than enough for combat duty a detailed optional Jet pack is included to attach to your Monoseed motorcycle so your figures can buzz the Spiral Zone battlefields. The jet pack system is an over the top feature for Monoseed but is so well designed and integrated into Monoseed design itself, it is a nice addition to the set. The jet pack system attaches to the side cowls, front stand and backrest and features moveable wing surfaces and all the components are attached together by two metal springs. According to the beautiful box art, Monoseed is pictured flying quite high with these jet packs thus making it a formable weapon in combat.

Besides the jet pack components, what is the believability of such a vehicle to exist in the real world? A few years ago a young inventor and motorcycle enthusiasts wanted to create a zero-emissions electric motorcycle. The result was the Monoseed looking working prototype “Uno.” Although the Uno is actually two large wheels that are close together side by side, one cannot help but think of Monoseed in the Uno side profile. I do not know if the Uno will be mass-produced but it is a great looking bike. 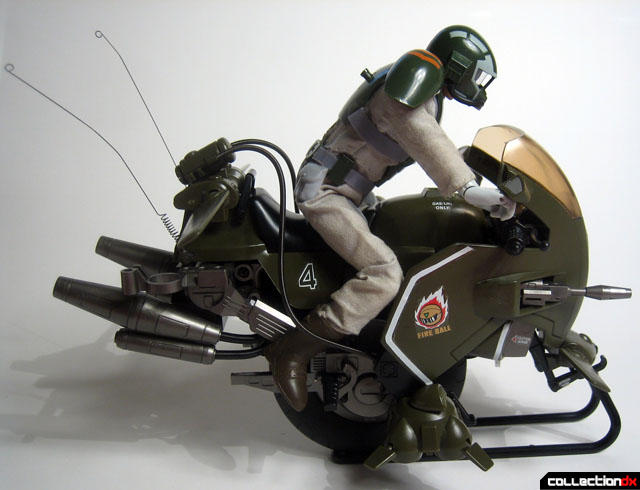 Monoseed is the crowning achievement in the entire Spiral Zone line and if there is one item that is a must own for any toy collector, Monoseed is the best example of the innovations and imagination of the Spiral Zone collection. An assault jeep called Fat Lynx was designed and prototyped for release in 1/12 scale for the Spiral Zone figures but it never made its way into production only seeing the light of day as a very rare premium mail-order-only model kit and a gashapon accessory. Like the rest of the Spiral Zone toys there was so much potential in the line but it was quickly cut short when the line was discontinued in 1987. Sadly Monoseed would be the only vehicle released, but what a release it is!

©2008 Article and Pictures by Leonardo Flores and CollectionDX

4 comments posted
Wow, this is really

Wow, this is really fantastic. I've managed to resist Spiral Zone figures so far, but a Monoseed and a figure may be on the horizon. Great Review!

Did Bandai create one.... I couldn't figure how it's gonna work... I mean a monocycle toy???

Wasn't this show repackaged as Zone Riders in the US? This monocycle was a popular concept though, appearing in vampire hunter d, at least one other anime series I think. This one is awesome though. I remember seeing it at Pony Toy way back.

Nah, the US cartoon was just called "Spiral Zone". It was released concurrently with the Tonka toys of the same name.

I seem to recall an anime called "Venus Wars" or something that had similar one-wheeled motorcycles...