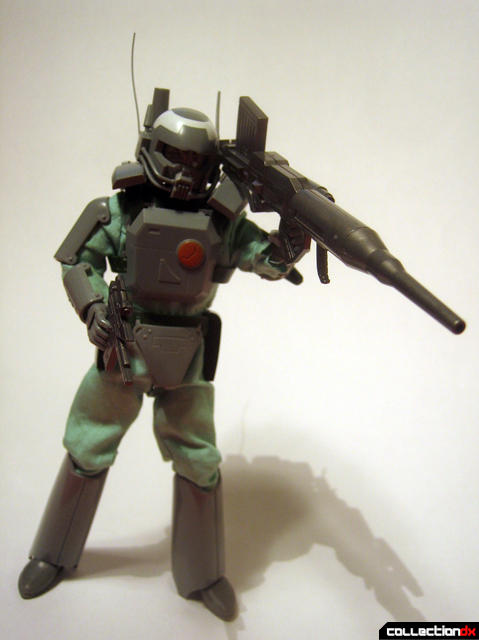 The second SFG Spiral Zone deluxe figure protect suit set to be released by Bandai in 1985 was Act 2: Hyper Boxer. Compared to the other protect suits, Act 1: Bull Solid and Act 3: Sentinel Bear, Hyper Boxer was the medium weight armor and weapon set of the Spiral Zone line. 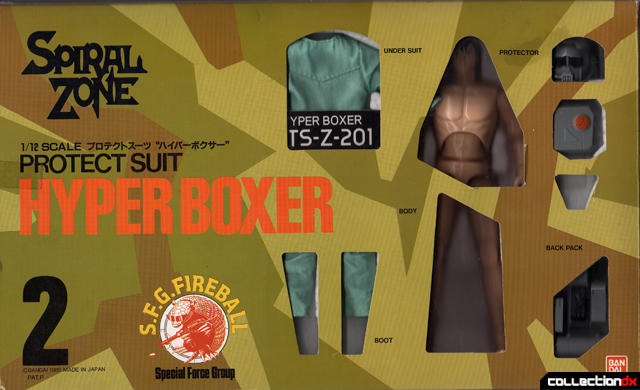 I originally bought Hyper Boxer new from Pony Toy Go Round back in the late 1980s for $25.00. According to the product box, Hyper Boxer was produced for combat in the then-future date of 2002 AD.

The design of Act 2: Hyper Boxer has grown on me over the years, mostly due to the fantastic colors the armor was molded in, the lime green combat suit and the protect suits odd features and detailed weapon accessories. 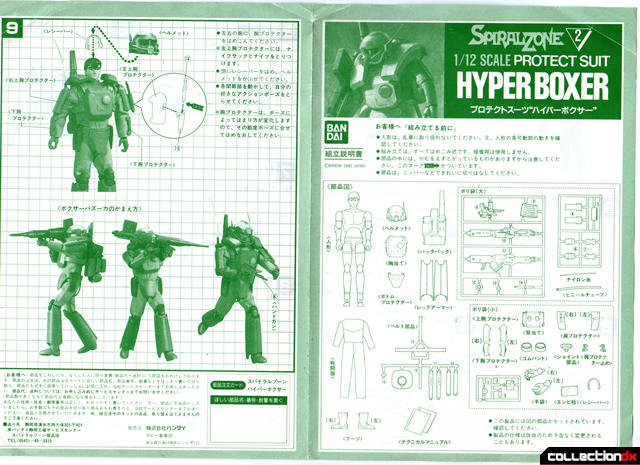 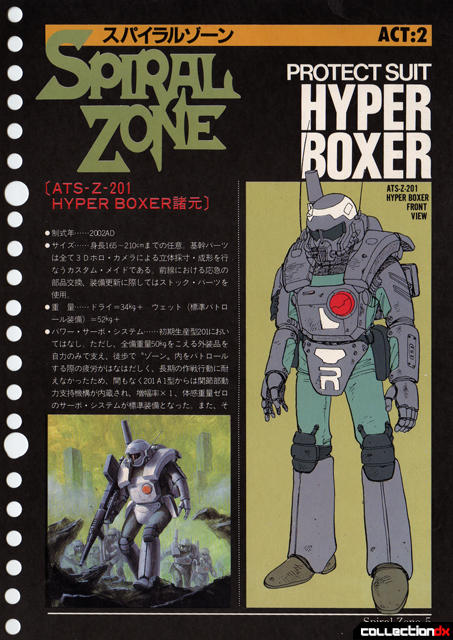 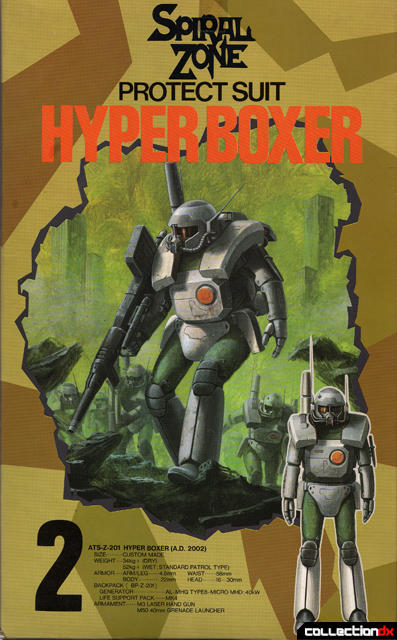 As with most all of the Spiral Zone box art, I admire the Autumn green and brown colors of the splinter camouflage on the box and the impressive oil painting on the back of the box of a squad of HB on patrol under a foreboding green smoked sky near some abandoned skyscrapers. 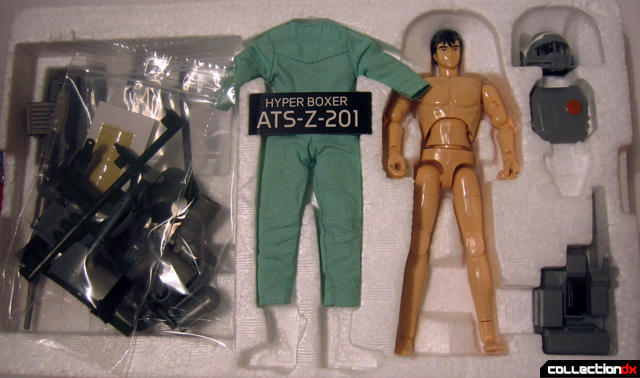 As the entire Spiral Zone action figure line was a balance between model kit and toy, one should take about two hours of build time out to assemble the armor parts and fitting them to the figure. I suggest purchasing a good set of sprue cutters from a local hobby shop for getting a good clean cut of the parts off the sprue. 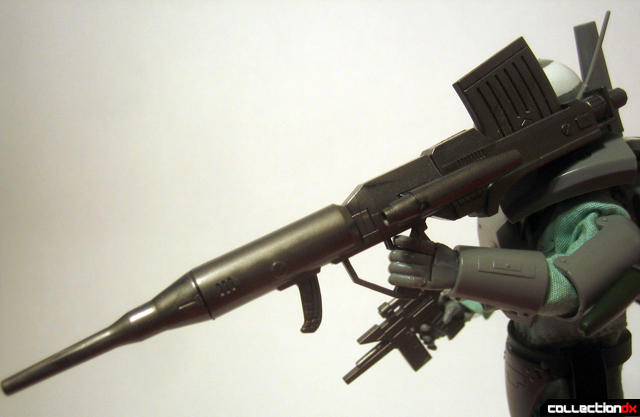 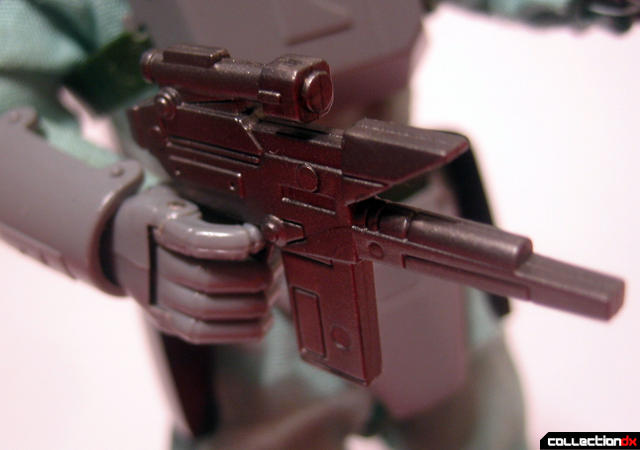 As stated before there are some great features that are included with the HB set. First off HB includes two weapons, a sub-machine type Laser Handgun and a well detailed M50 40mm Grenade Launcher. The Grenade Launcher seems to be the weapon of choice for HB combatants as the HB squad on the back of the box is featured carrying only Grenade Launchers. I really love the look of the Grenade Launcher as it is one of the most impressive pieces of artillery in the entire Spiral Zone line and looks great when any of the figures are displayed with it. 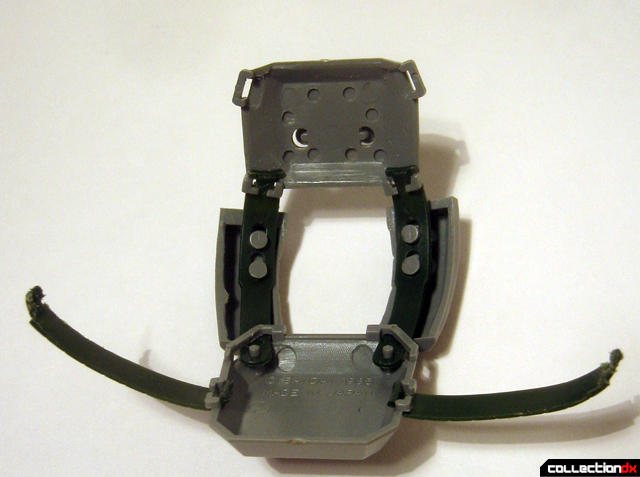 Perhaps because of complaints from customers who bought Bull Solid, many of the connecting belts and other fragile parts were redesigned to be less prone to breakage for HB. For example, the fragile easily broken antenna that was included on Hyper Boxers helmet were replaced with soft rubber parts for HB’s helmet parts. Also the belt connectors on the protect armor were redesigned using a pin system that puts less stress on the armor’s plastic loops. This is great when your taking the figure apart and putting it back into the box, as I am always extremely stressed out when taking Bull Solid apart but with HB I have no worries. 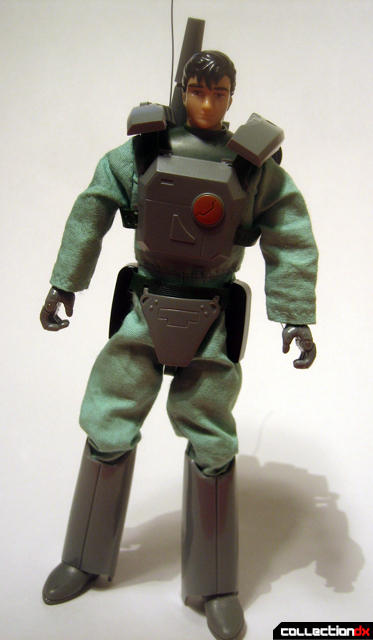 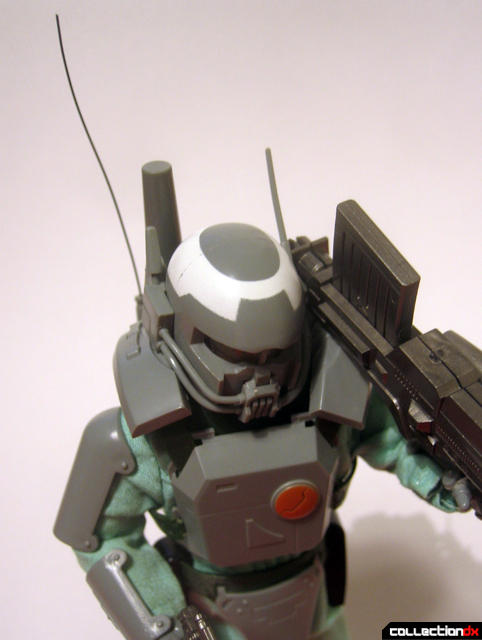 Two of the most memorable features most collectors remember about HB are the leg armor shields and shoulder armor. The leg armor humorously reminds collectors of armored leg warmers. On the whole, with the black kneepad protectors, the leg armor looks good with the overall concept of the figure. Remember to double check if the two black kneepads are included with the set as they are almost always missing when I see them up for auction. The large football pads style shoulder armor also builds up the look of the figure, the best feature being the left armor pad has two rubber hoses that attach to the backpack for nice integrated armor and backpack look. 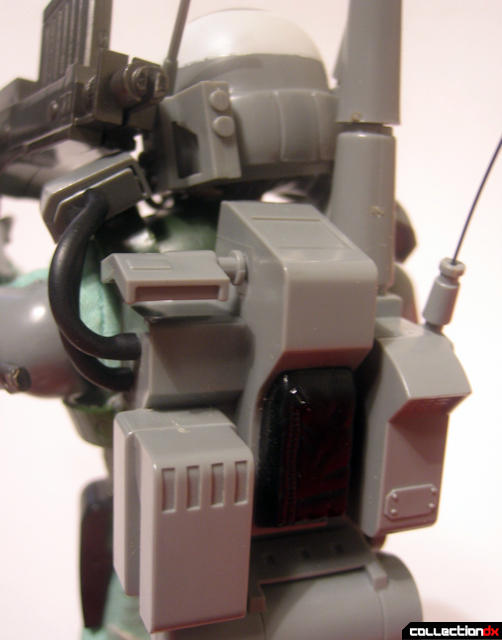 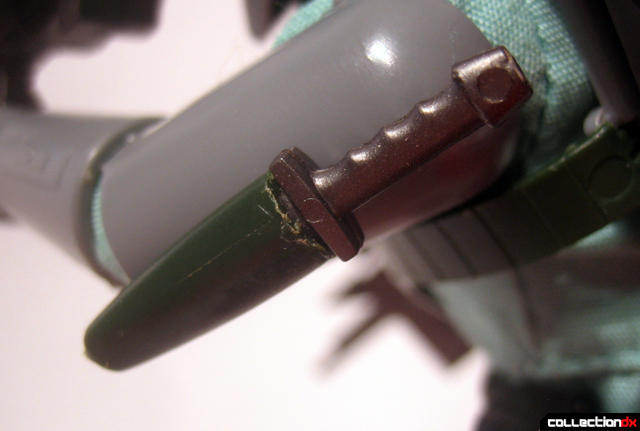 Some more armor features include four parts of armor that snap on the upper and lower arm with the nice touch of a trench knife being fitted to one of the pads. But keep in mind they have a tendency to come off the arm and in my opinion the only feature that could be bothersome when displaying the figure. 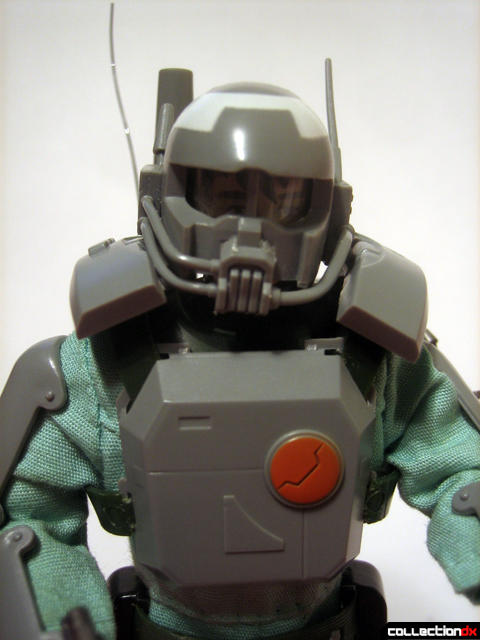 The fine paint details of both the chest armor and helmet look great and like all the other Spiral Zone releases the helmet features a thin clear lens that looks in scale and gives the figure that extra little detail that I love about the entire Spiral Zone line. Headphones are included to help keep the helmet snug to the head but are not needed, unlike the Bull Solid figure.

While Bull Solid was predominately two colors of grey and Olive Green, the color spectrum of HB is made up of black, grey, lime green, dark green and silver, making for a very subtle but colorful figure. The color spectrum of Spiral Zone figures would reach its zenith with Act 3: Sentinel Bear, but HB is a fantastic effort. 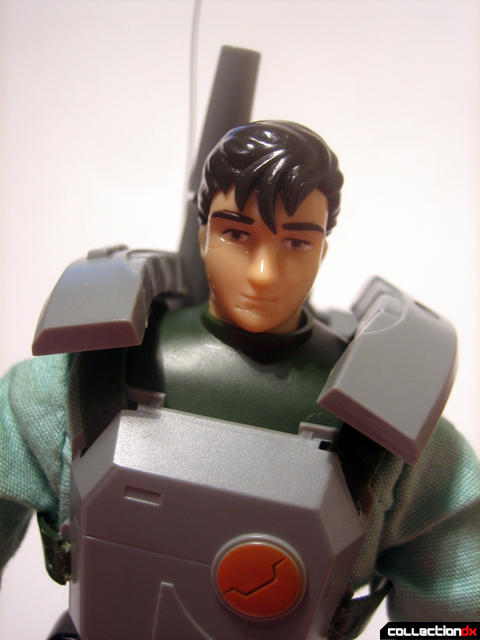 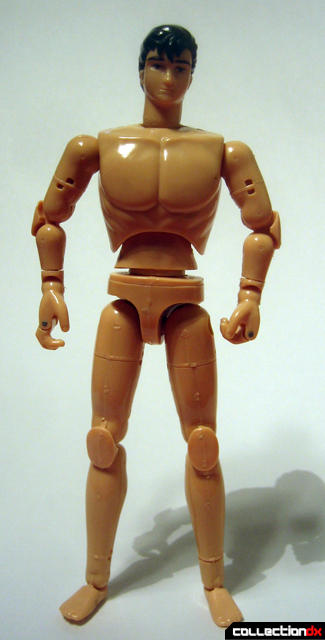 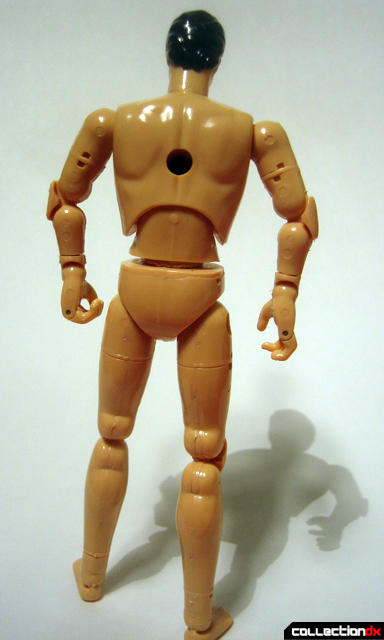 The 36-point articulations Systeminjection figure included with HB is another remarkable face sculpt with its youthful anime looking face and fashionable Brit-pop haircut. Like all the other Spiral zone sets, HB comes with grey plastic molded hands to simulate grey gloves, that can be attached when the flesh colored hands are removed. The hands also feature the famous Spiral Zone moveable trigger finger, so it can grasp the gun correctly. 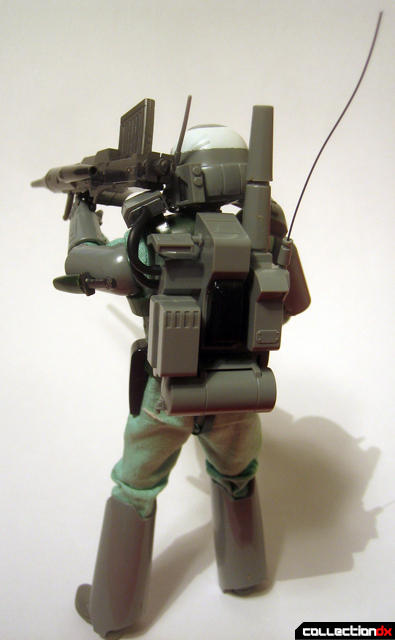 The backpack is surprisingly smaller and compact when compared to both Bull Solid and Sentinel Bear. I like the small details of the simulated cloth and zipper WWII style pouch on the backpack and the stretched sprue plastic radio antenna that is included with the set.

Overall I think Hyper Boxer is one of the most even and well thought out protect suit design in the entire Spiral Zone line and these days expect to pay between $60 and $120 for a Hyper Boxer figure. It is a great looking figure when assembled and displayed and does not have all the breakage points that Bull Solid is known for. Another legendary release from Bandai’s SFG Spiral Zone line that is a must for the Spiral Zone collection.