The Fire Vulture Battle Machines are actually converted ore drilling machines that were used by the robots before and during their rebellion. To this day, they still bear some of the signs of their hard working days, such as cautionary yellow & black marks. One of the more common designs from before the war, converted Fire Vultures are numerous and are regularly seen on the battlefield along with the robots’ other mass-produced Sentry Battle Machines. The long drill head on its right arm has been replaced with a fusion-powered flamethrower, energized directly from the power generators by an armored cable. The robots wisely kept the large grabbing claw on the left arm intact. In addition to upgrading its armor & internal structure to survive combat, it also has a single grenade sitting over the right shoulder, and a newer combat sensor package over the left. The largest advantage of the Fire Vulture is the new large single turbofan engine mounted onto its back which allows it to fly long distances, including across the high chasm of Sentai Mountain. A frequent tactic used by Fire Vultures is to quickly jump over the humans’ defenses, use their large claws to tear through armored vehicles, Battle Machines, or structures, and then torch the insides using their flamethrowers. Whatever the converted Fire Vultures have had changed is not fully known, but it has been confirmed that they are now piloted by battle-hardened Devastator-type robots, which aggressively pursue even wounded targets until they are completely destroyed. 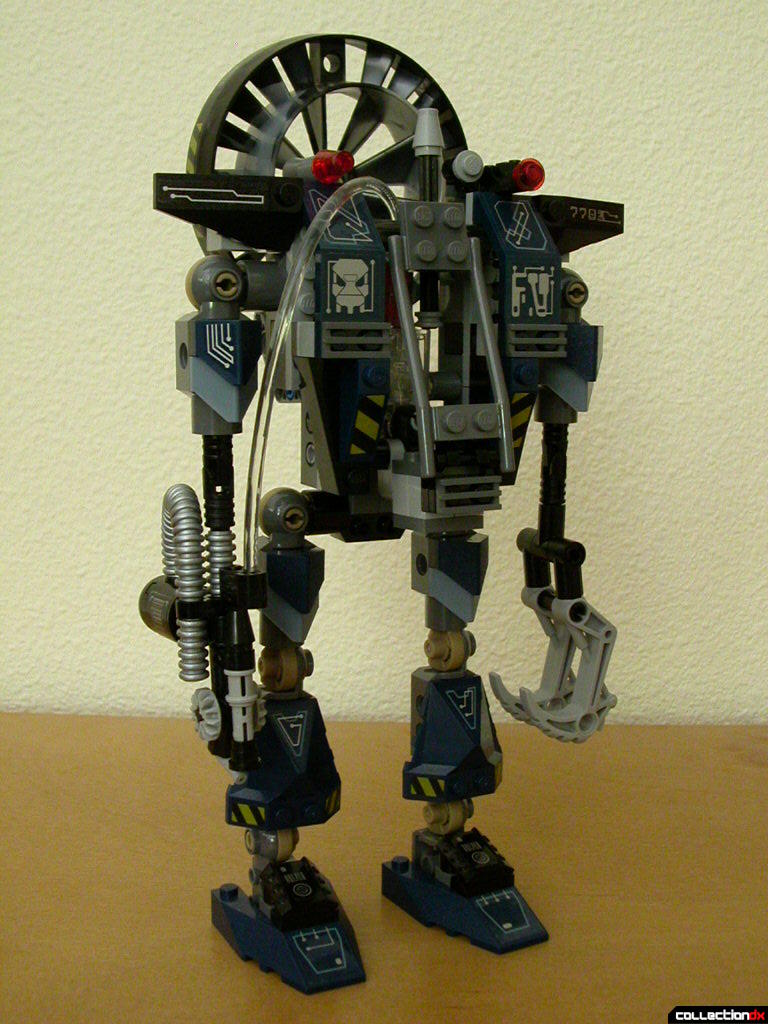 The Fire Vulture (back) is not a bright and cheerful design, dressed in mostly dark blue, dark gray & black pieces, and then highlighted with light blue pieces and silver decals. But, that’s the point- you could see that it was once a mining machine that’s been converted into a war machine. Using joints originally developed for the Lego “Knights’ Kingdom” line, it is very flexible. The shoulders, hips, and knees have two-axis joints that snap when moved, and allow for a wide range of fixed poses. The ankles also have both snap and free-rotate joints, but this isn’t as much of an issue. The left arm, spotting two large claws originally designed for the Toa Gali set (#8533) from the 2001 “Bionicle” debut line, looks weak with the thin elbow & wrist. The flamethrower design is inventive & complex looking; using the cylindrical body of a squat R2 astromech droid from various “Star Wars” sets to serve as the holding tank for whatever flammable liquid exist therein. However, the way they set the weapon up in the instructions it tilts inwards towards the body awkwardly, so I repositioned it to tilt in a more natural-looking downward position. The shoulder design on the right side sometimes interferes with the clear fiber-optic cord so that it has to be moved either in front or back. The large turbofan on the back is an interesting idea, but not executed very well. A thin two-piece joint is used, and the turbofan piece is too heavy for it to take, so it frequently slips & sags; the mounting for the free-rotating fan also interferes with the trigger for the light brick. Unlike most of the human Exo-Force Battle Machines, the Fire Vulture uses no clear canopy, opting instead for a simple plastic framework piece that surrounds the Devastator’s body. 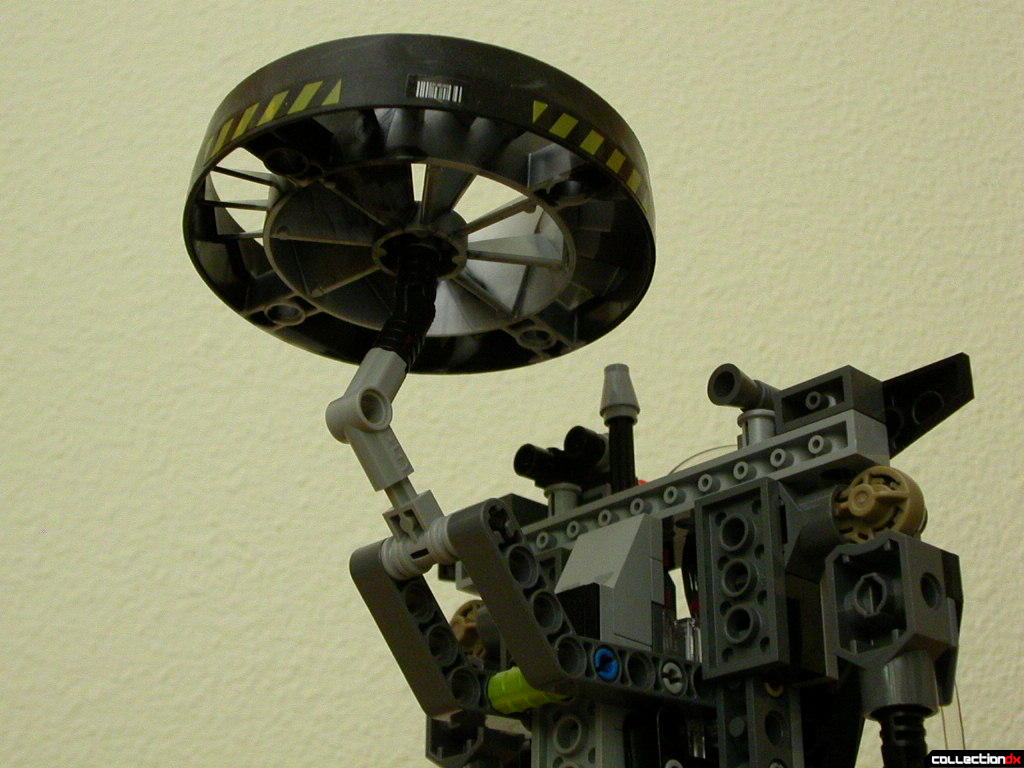 In addition to being large and poseable, the Fire Vulture is one of five “Exo-Force” sets that use the newly-developed Lego light brick- a transparent 2 x 4 brick that has a small red light emitting diode (LED), a small, enclosed, self-contained battery, and a small trigger blended into the top. While the light brick can be snapped onto things, it has no studs of its own so nothing can be snapped on top of it or else the trigger couldn’t be accessed. The light brick in the Fire Vulture set is activated when a multi-piece trigger is pressed on the back of the torso. This slides the front of the torso up slightly, and inside a Technic piece is wedged against the light brick’s trigger, activating the brick’s battery & LED. When this happens: 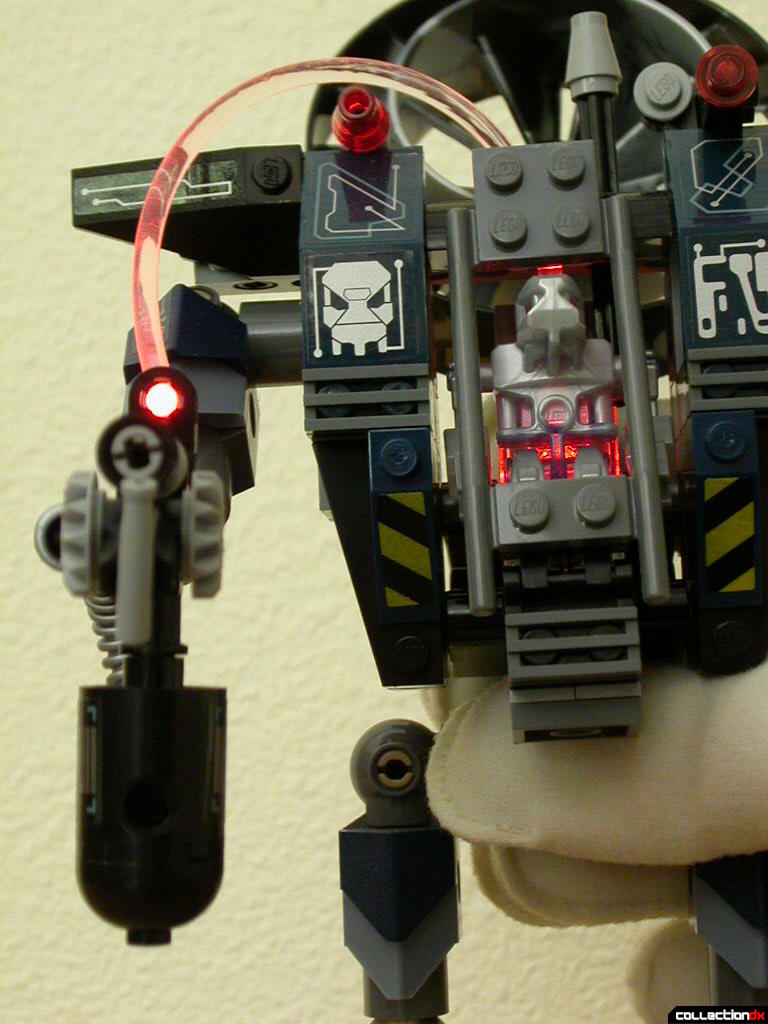 Lego Set #7703 also comes with a new blue Devastator robot minifig, which is exactly the same in appearance as the other robots in the line except in color. What separates the different light gray Devastator robots is the alternately-colored plastic in their torso pieces- blue for Set #7703, red for Set #7702, and green for Set #7704. The alternate colors are semi-transparent, and light can shine through them. For the eyes, a red #2 Technic bar is slid in through the back of the head. The hand claws can also rotate at the wrist, and need to be attached. 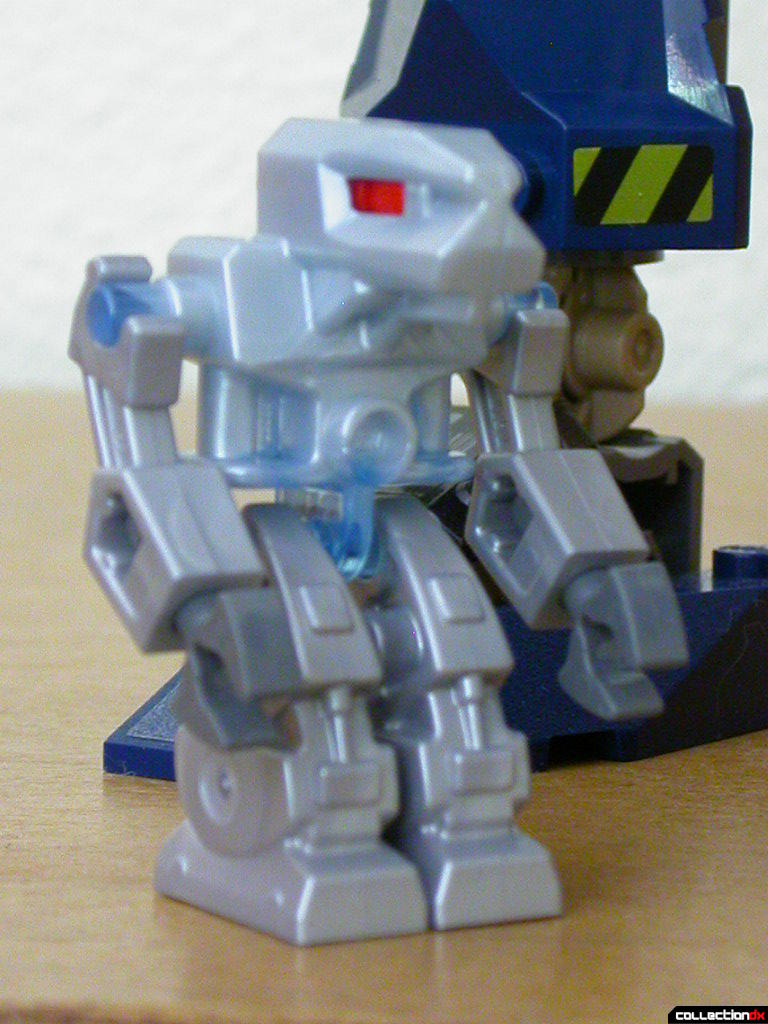 Normally, when a Lego set needs specific details on a part, such as a control panel or flag, the image is printed or painted directly onto specific parts. However, the “Exo-Force” line breaks that mold by using stick-on decals; something that was rarely ever used in the past. There is a small sticker sheet which provides allegiance markings, warning symbols & notices, and names- some of them written in Japanese text! Unlike the human Exo-Force Battle Machines, the robot’s Battle Machines to not have human language markings on them. But, this still serves to allow for a wider range of piece marking without Lego having to create a completely different piece each time, and merges the “Exo-Force” and Japanese toy influence closer together. It does, however, have a small downside- because of the design of the decals, some of them cover places where other Lego pieces can go, which limits how a decal-applied piece can be used or taken apart. This covered-hole thing is not an issue with Set#7703.

In addition to building the standard Battle Machine, the official Lego “Exo-Force” website (http://exoforce.lego.com/default.aspx) shows how the same pieces can be rearranged into an alternate floating Hover Hawk attack craft; found in the Online Building section of the site, and pictured on the back of the set’s box. (I haven’t built it myself yet, so I can’t give details on the alternate model.) As a bonus, online instructions also show how Set #7703- Fire Vulture can be combined with Set #7702- Thunder Fury (sold separately) to form a much larger gray, black, and blue robot Battle Machine known as the Raging Storm. (Again, I haven’t built this combo model yet.) 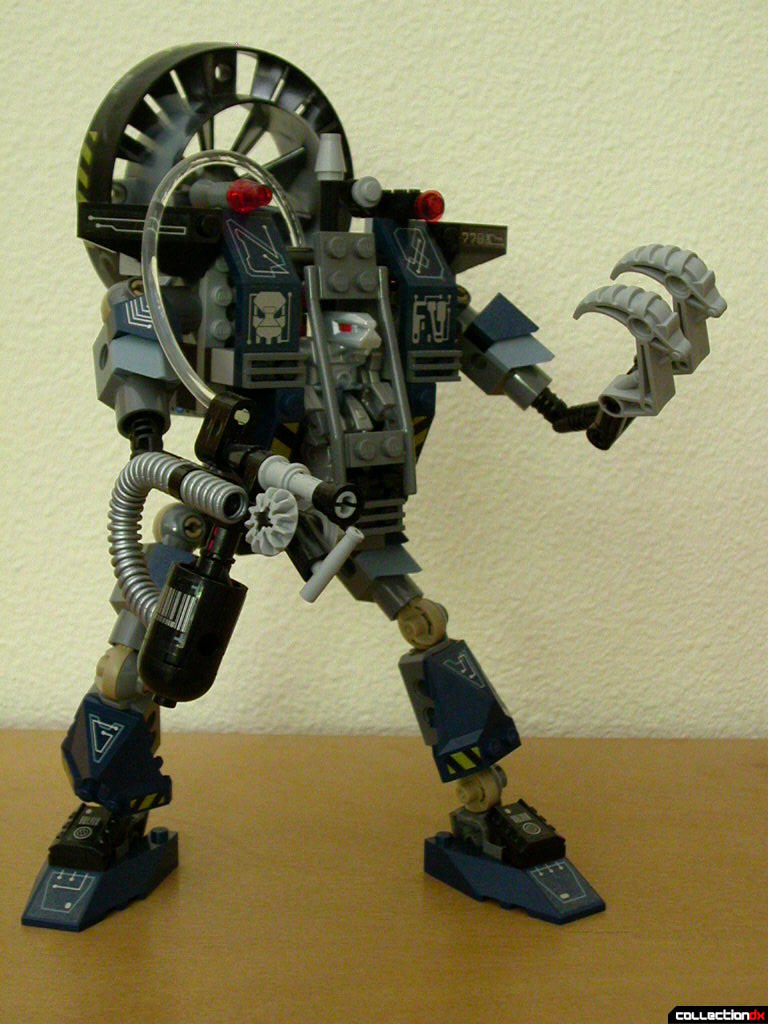 Initially, I had no intention of getting a Fire Vulture, but the more I thought about it, the more I warmed up to it. It didn’t have all the missiles or lasers that the others do, but it could fly, and had a flamethrower on it; reminding me of a futuristic paratrooper jumping out of a plane with a small yet powerful weapon. My biggest complaints would be the joints they chose to use for the elbows/wrists. The turbofan pitching is a good idea, but, again, they used a weak joint for its weight. If you like flying powered armor or battlemech designs from the original “Battletech” series of RPGs & books, I’d recommend this. There’s something interesting in this series, and I won’t mind seeing more of it if they continue it.