A front-line Battle Machine designed and built by Exo-Force, the bulky red Grand Titan is the most powerful mobile weapons platform the human forces employ against the robots. Its pilot, the green-haired Takeshi, is especially well fitted to piloting the Grand Titan because of his anger towards the robots. Not only did he once work side-by-side with them in the mines, but they took his family hostage when they began their assault on Sentai Mountain. The Grand Titan delivers heavy strikes on enemy robots at a distance with a rotating, six-barrel heavy laser cannon mounted on its left arm and it is powered directly by the Battle Machine’s generator via an external armored cable. This weapon is backed-up by two short-range variable-yield missiles mounted above either shoulder for when the laser cannons are cooling from a long volley. It also features a large and powerful pincer claw on its right arm which can not only cut through most anything, but deliver channeled electromagnetic pulses (EMP) into anything it touches; this shuts down any robot or Battle Machine instantly, and allows the Grand Titan to finish them off with a pair of close-range laser weapons mounted under the cockpit. Like all of Exo-Force’s other Battle Machines, the Grand Titan uses a control system that mimics the movements of its pilot, so Takeshi needs to keep himself fit as well in order to defeat the robots. 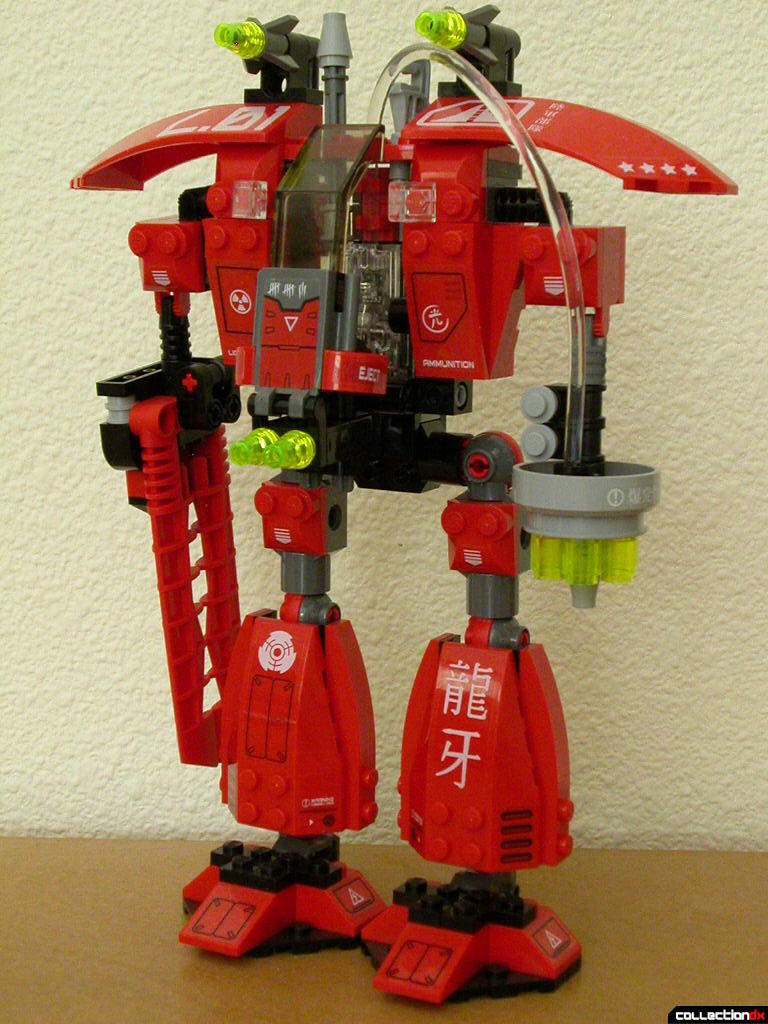 The Grand Titan (back) is one of the two large human-allied Exo-Force sets, and is rather impressive. Using joints originally developed for the Lego “Knights’ Kingdom” line, it is very flexible. The elbows, hips, and knees have two-axis joints that snap when moved, and allow for a wide range of fixed poses. The shoulders have two joints each, though one of them snaps; the other free rotates, and sometimes the arm sags because of this. The ankles also have both snap and free-rotate joints, but this isn’t as much of an issue. The large EMP pincer is made up of two identical hard red PVC pieces which can open and close manually; they were originally made as the twin swords for the Toa Metru Matau set (#8605) from the 2004 “Bionicle” line. The right arm has the free-rotating six-barrel cannon. 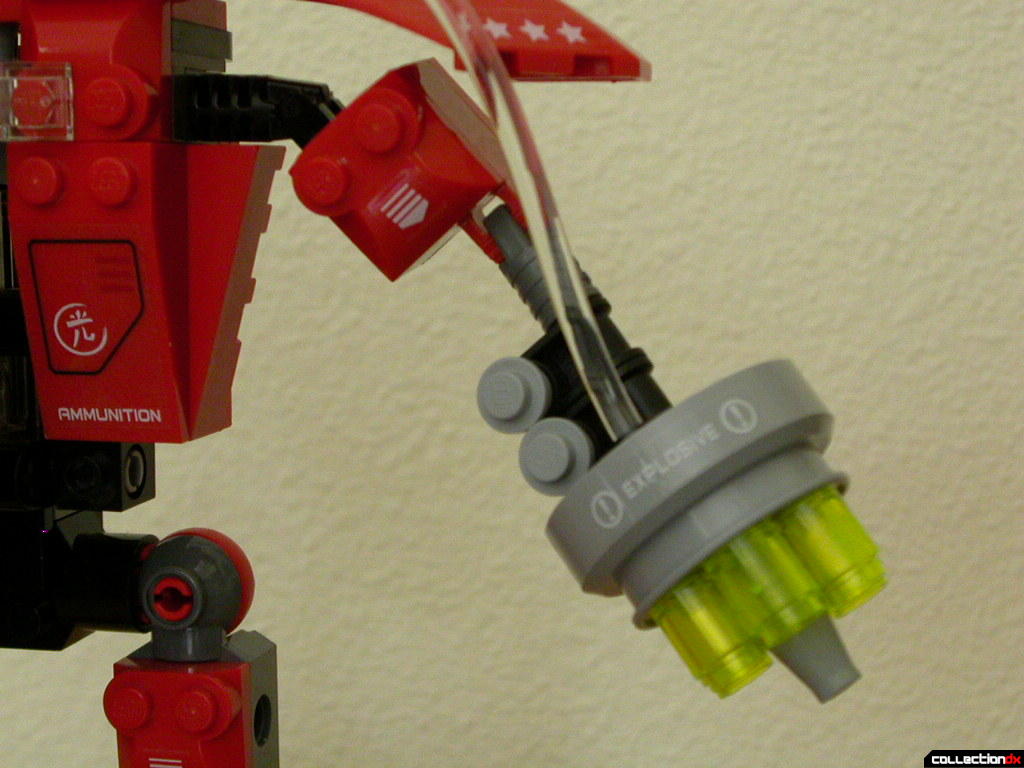 In addition to being large and poseable, the Grand Titan is one of five “Exo-Force” sets that use the newly-developed Lego light brick- a transparent 2 x 4 brick that has a small red light emitting diode (LED), a small, enclosed, self-contained battery, and a small trigger blended into the top. 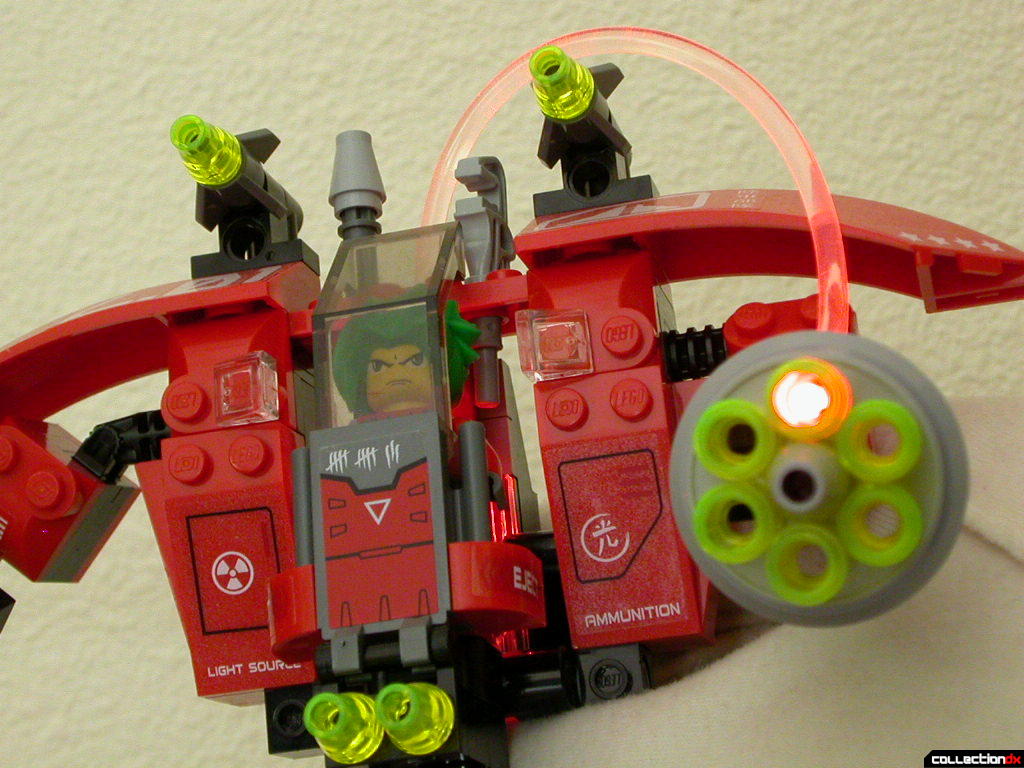 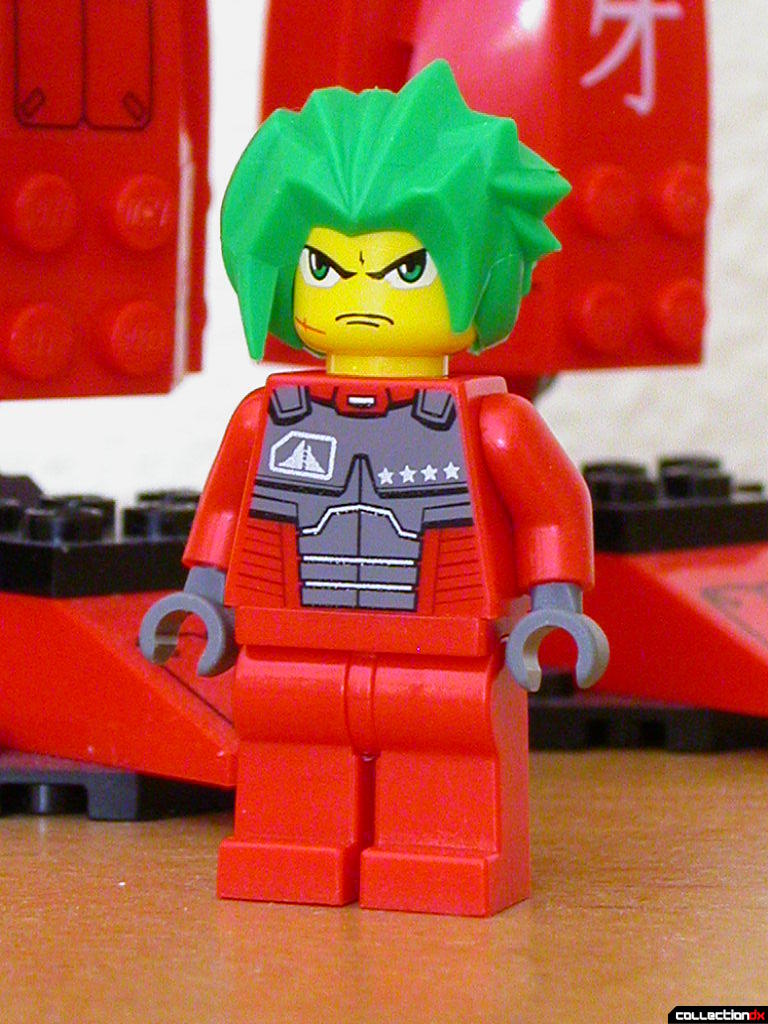 Lego Set #7701 also comes with an exclusive Takeshi minifig, who not only has two separate facial expressions (one painted on either side of his head), but a new green spiky hairdo piece introduced in the “Exo-Force” line, which adds to the Japanese anime style of the series. When the head and hair are flipped around, Takeshi either displays a determined face, or a battle-cry expression. (This double-face design is similar to some of the LEGO “Spider-man” minifigs from 2001 and 2003.)

Normally, when a Lego set needs specific details on a part, such as a control panel or flag, the image is printed or painted directly onto specific parts. However, the “Exo-Force” line breaks that mold by using stick-on decals; something that was rarely ever used in the past. There is a small sticker sheet which provides allegiance markings, warning symbols & notices, and names- some of them written in Japanese text! Translations of the Japanese text are given on the sticker sheet, but do not go on the parts. This serves to allow for a wider range of piece marking without Lego having to create a completely different piece each time, and merges the “Exo-Force” and Japanese toy influence closer together. It does, however, have a small downside- because of the design of the decals, some of them cover places where other Lego pieces can go, which limits how a decal-applied piece can be used or taken apart. This covered-hole thing is not an issue with Set#7701.

In addition to building the standard Battle Machine, the official Lego “Exo-Force” website (http://exoforce.lego.com/default.aspx) shows how the same pieces can be rearranged into an alternate squat, reverse-knee Titan Tracker Battle Machine; found in the Online Building section of the site, and pictured on the back of the set’s box. (I haven’t built it myself yet, so I can’t give details on the alternate model.) As a bonus, online instructions also show how Set #7701- Grand Titan can be combined with Set #7700- Stealth Hunter (sold separately) to form a much larger red, white, & gray Exo-Force Battle Machine known as the Mountain Warrior. (Again, I haven’t built this combo model yet.) 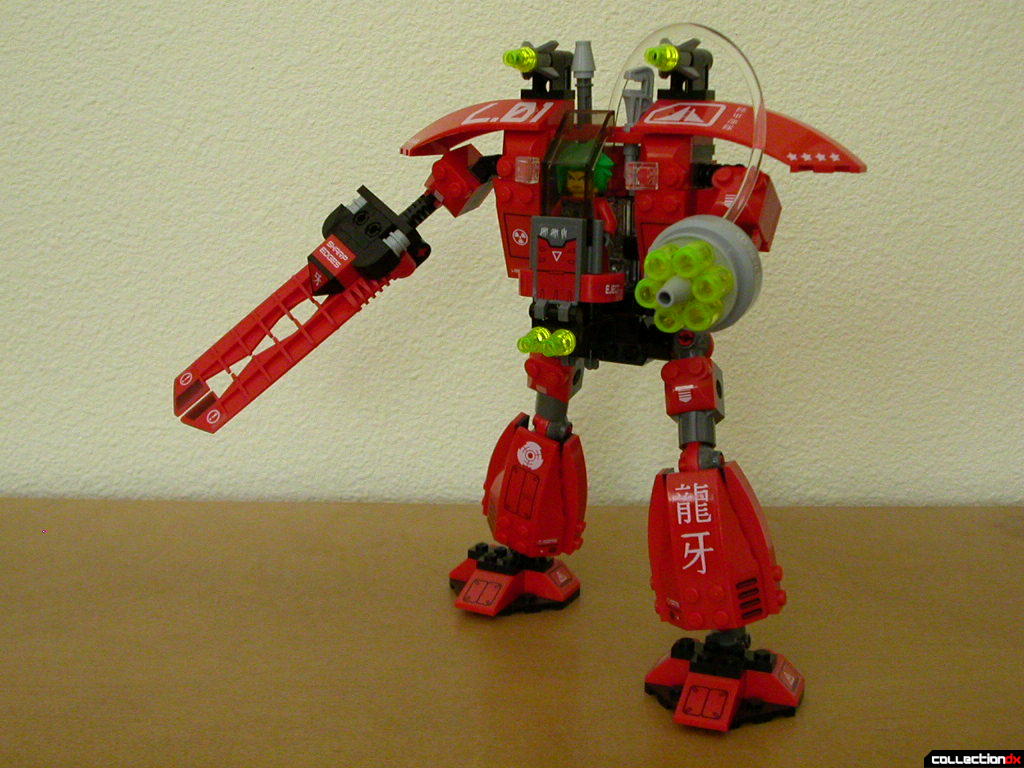 Overall, I like the Grand Titan a lot because of its angular shape, heavy red armor look, great poseability, and it was the first of the larger sets I bought from the breakout “Exo-Force” line. My only complaints about design would be how loose the pieces in the shoulder joints are- something that is compensated for more so in the other three Battle Machine sets in this toy line; or how weak & unprotected the back of its legs look without some sort of red armor there to cover the joints like they are in front.. I’d recommend it for anyone who likes these little compact robots from anime, Battle Mechs from the older “Battletech” RPG games & books, or the popular Lego “Bionicle” line. There’s something interesting in this series, and I won’t mind seeing more of it if they continue it.